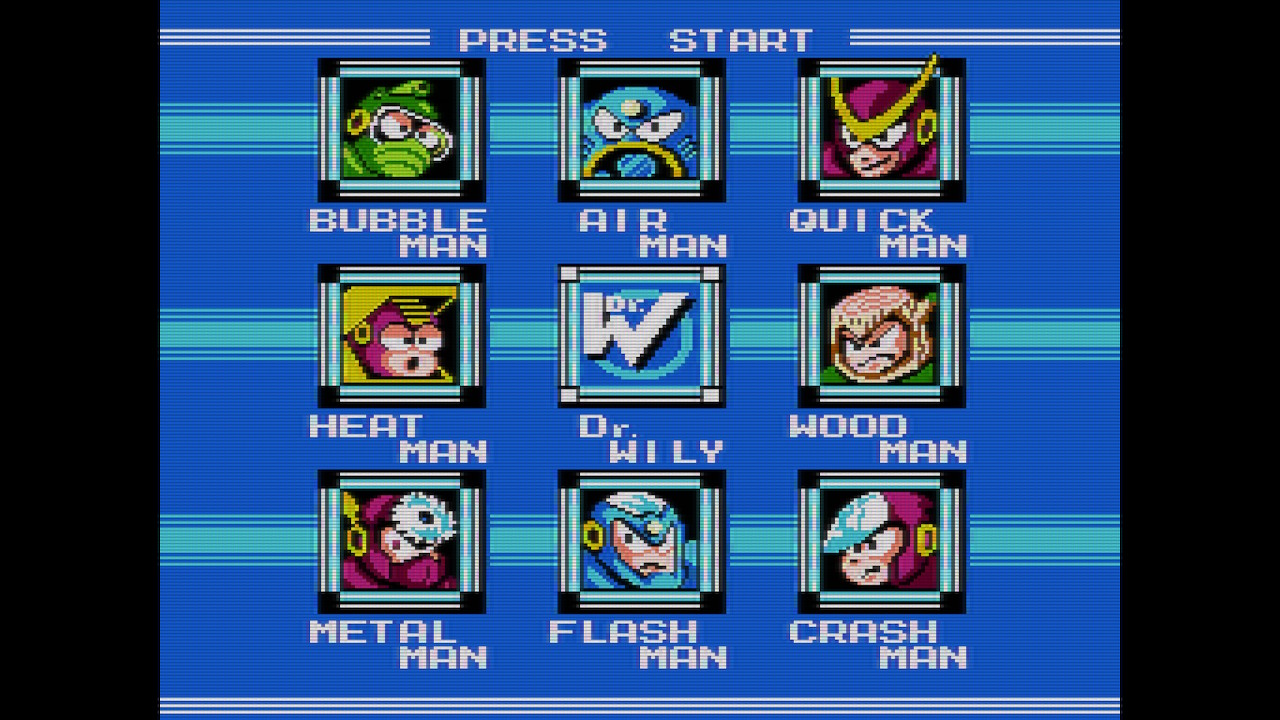 There is no doubt that the first Mega Man game was a demo of the concept by Capcom, albeit a complete and very good demo, and that's because its immediate sequel a little more than a year later improved it in each and every way. Often considered one of the best, if not the best, pure Mega Man game by fans, Mega Man 2 is a sequel that fulfills all the promises of the original and then some.

With more Robot Masters, better stage designs, larger sprites, more complex music, better background graphics, stage structures, as well as a smoother mechanical experience, it's a magnificent jump in quality. While the series concept was already solidified with the first game, it was the second that proved the franchise's promise and potential for growth. 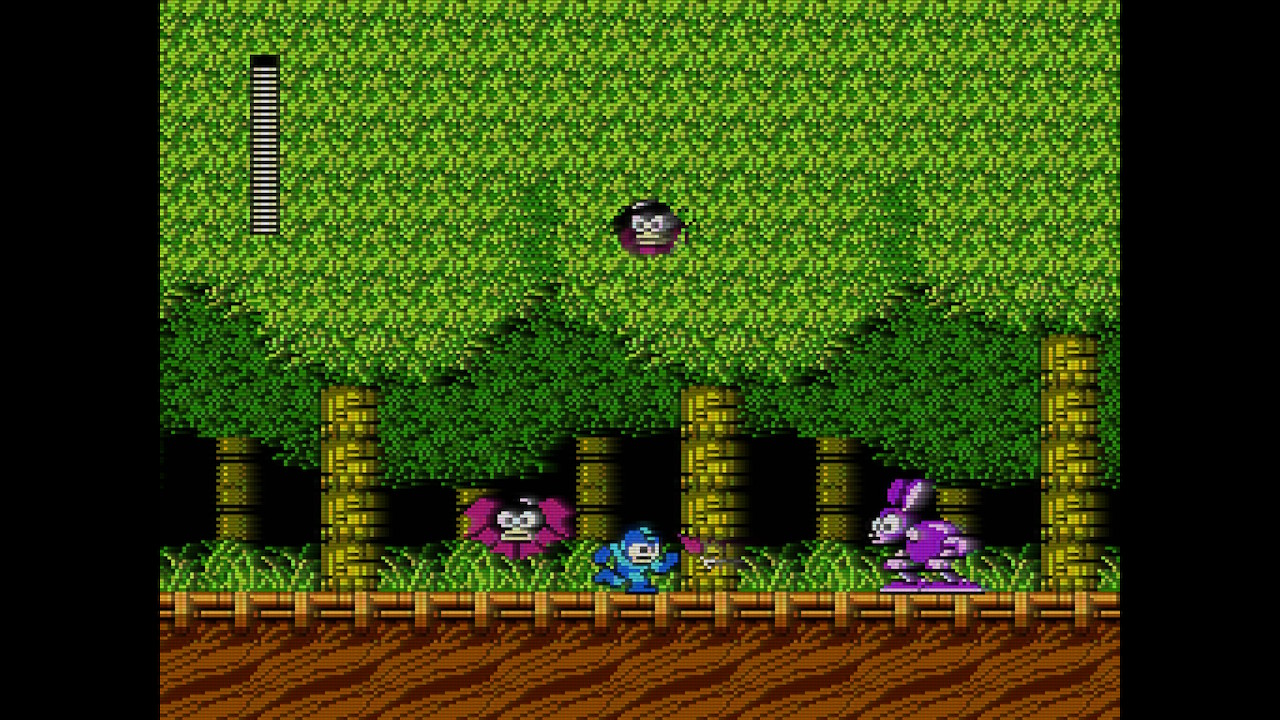 It's actually easy to forget that this is a franchise that wasn't guaranteed success in the days. That's clear by low sales of the first game and the disrespectful ugly box art of the US versions which showed an adult man in blue using a gun. Even the game's packaging and manuals didn't do a good job of explaining the game or setting the scene, referring to each stage as "empires" and somehow trying to depict a much more epic struggle than the Saturday-Morning cartoon vibes of the game.

In the end, the quality of the game shone through, and the future of the franchise was secured with this game. Let's take a look at the elements that made it such a success:

Mega Man 2 set eight as the number of key bosses (Robot Masters) that will be the standard for the rest of the series, each with its own stage. In addition to increasing the stage count by two from the first game, each stage felt a little bit longer or at least most had a uniform length to them.

The same kinds of obstacles still appeared, but this was the first time bigger enemies, not yet at a mid-boss level, appeared in the game. These creatures, like the robot tiger in Wood Man's stage, had much bigger sprites and packed quite a punch. Each stage also came with its own hazard theme. For instance, moving conveyer belts in Metal Man's stage and water-based difficulties (with spikes) in Bubble Man's. One of the most infamous obstacles where the instant death rays in Quick Man's stage where you needed to use Flash Man's time-stopping weapon for an easier time surviving. That's something I actually like very much, as you will often want or need to use the weapons you acquire to more easily finish a stage. 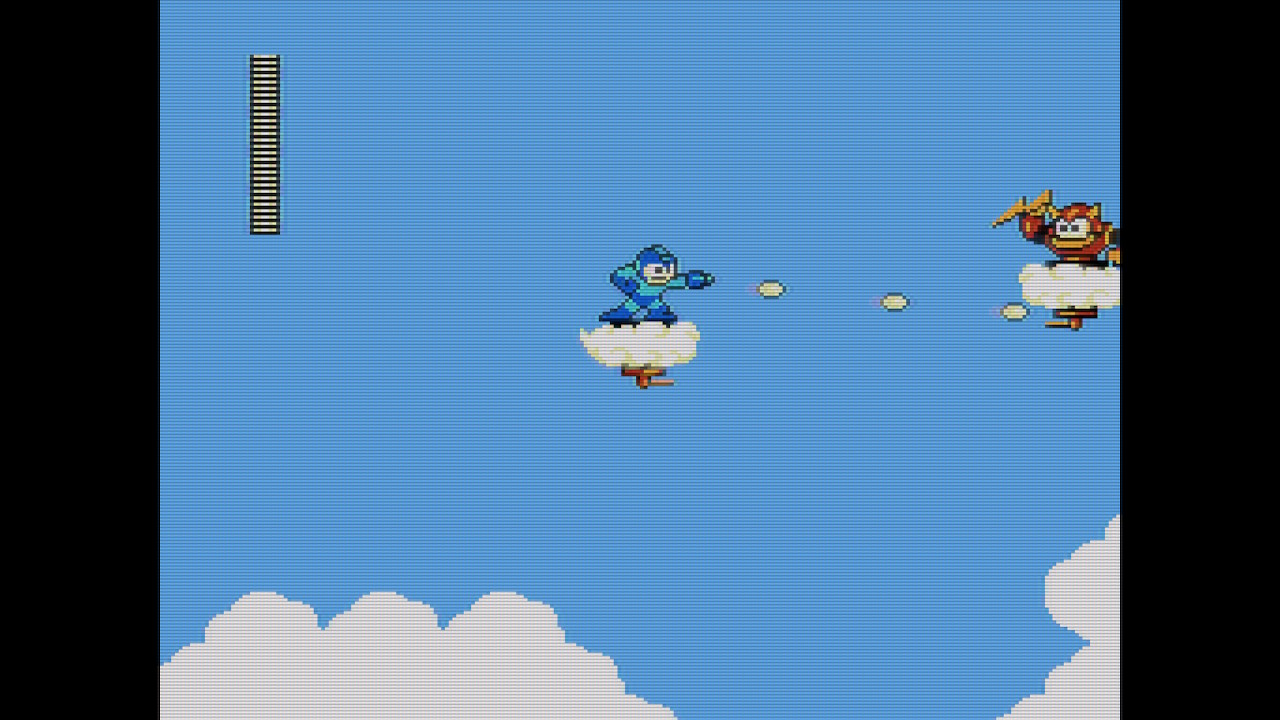 Just as the level design was spruced up in this sequel, so were the level graphics. Initially, starting with Metal Man's stage was underwhelming. Just a black background with the occasional gear element. However, the rest of the stages started showing the artistic skill of Capcom, with moving water and waterfalls, a jungle scene background, and some neon block in the base elements. The stages were not only visually more impressive, but the stage construction told a story for each level.

It's already apparent how much was built on the bones of the first game, but the biggest improvement in my opinion was the drastic improvement to its mechanical performance. Mega Man simply moves smoother and more predictably now, as the game feels less glitchy, and that works even when the stages play with your movement by using wind and speed-altering floors. Perhaps this is a major reason why the game is considerably easier, as the controls are no longer an element you fight against to survive.

With a combination of both weird (Metal, Time) and obvious (Fire, Water) elements, the bosses in Mega Man 2 are iconic both for themselves and for setting continuing to set the standards for Robot Masters in the future. One thing that it deviates from though, and it's perhaps the only Mega Man to deviate from, is that's the only game not to have a strict weakness chain. In fact, it could entirely be due to a glitch or a last-ditch balancing effort, because the Metal Blade you get from Metal Man is the most powerful weapon in the history of the franchise. 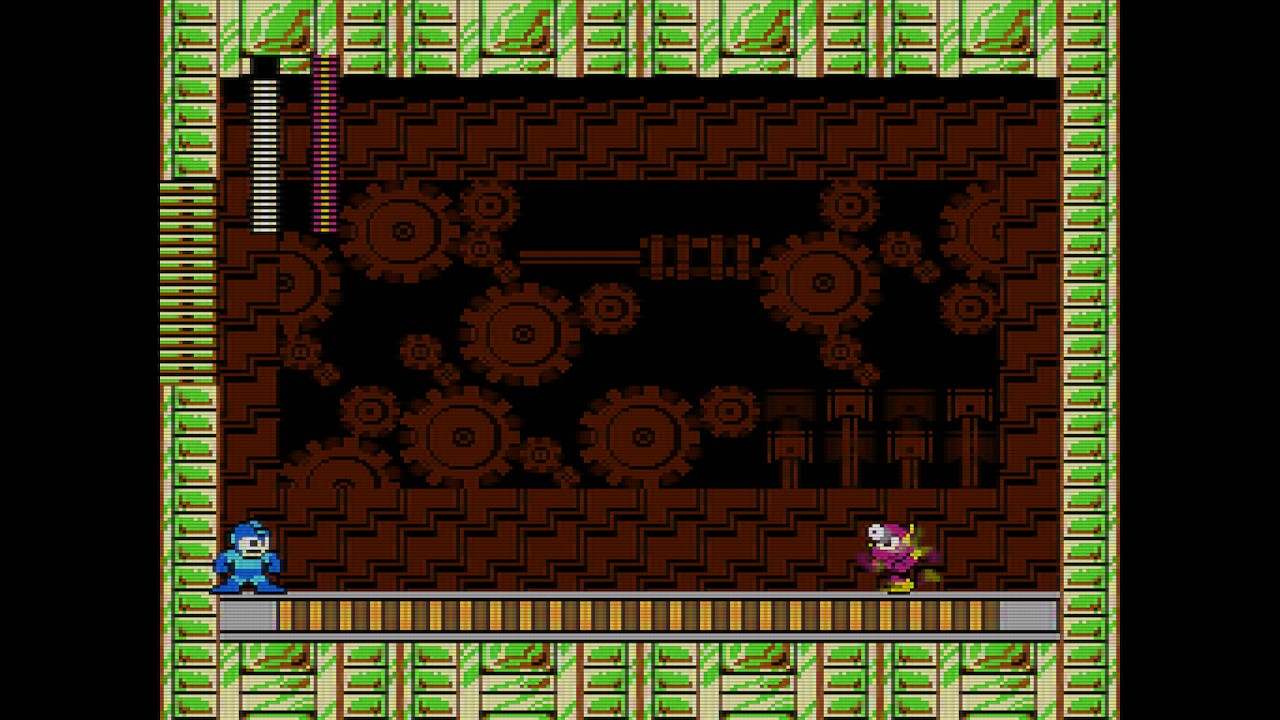 As such, the weakness circle makes no sense, it's not even a circle. Metal Man vs Wood Man (who also has Heat Man as a bigger weakness), Bubble Man, Flash Man, and... Metal Man himself. Bubble Man beats Heat Man, who beats Wood Man who gives you the ever-useful Leaf Shield. You can use that against Air Man who is strong against Crash Man, who gives a weapon that is necessary against one of Wily's more unique bosses. Finally, Flash Man's weapon can stop Quick Man for nearly half his health, if you didn't empty the energy bar trying to pass through his level that is.

So, with Metal Man's blade (which you should always get first), you can beat half of the game's bosses. Not that you need to use the weapon weakness in this game. Thanks to the improved mechanics and the more varied boss patterns, it's both challenging and fair to defeat most bosses using your standard lemons. Only Air Man and Wood Man are difficult to deal with to any degree.

In fact, one of my main complaints about this game is how trivial the weaknesses make the bosses in the standard difficulty level. Usually, it only takes three hits for a boss to be defeated by their weakness, and that reduces the level of challenge considerably. 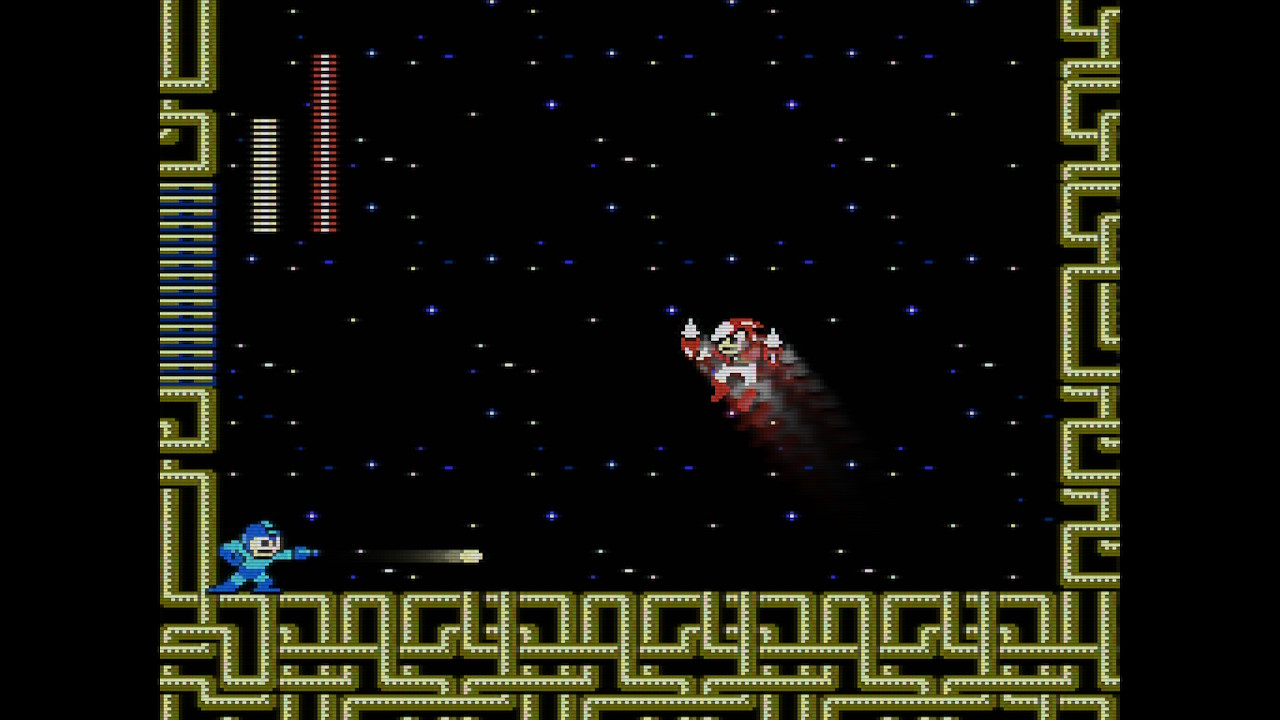 That's not the case with any of Wily's bosses though, with one of them being an impressively big Dragon sprite that chases you before fighting you in precarious conditions. Others start the theme of having a puzzle element to Wily's bosses, where you need to think about which weapons should work best, or how to defeat them with the limited ammo you have. This includes the iconic final boss, so keep your Lead Bubble weapon handy.

For the second time in a row, the soundtrack of the game is handled by a single composer, but by this time, Capcom had more time to make his music, and they had more sense of how to preserve enough memory for a great soundtrack. With that level of increased capabilities, Takashi Tateishi didn't disappoint.

With all respect to the first game's soundtrack, here is where Mega Man starts (but is not nearing) pushing the NES's sound to its limits. Its tunes are more catchy, and its melodies are a bit longer and more complex. This is why it was hard for me to pick only three tracks to talk about, but I think these three are really the best in the soundtrack.

What's there to say about this legendary track. It starts with immediate resolve, pushing Mega Man towards the evil Dr. Wily, and it never lets go of the tempo throughout the track's length, which at 64 seconds before it loops is one of the longest in the game. Just as the action-packed melody hits, the secondry melody highlights the drama of the situation, with a spacier sound. Then it goes for a lower melody before resolving into an amazingly dramatic solo and finally triumphantly going back to the original driving melody. Easily one of the best tracks in the entire franchise.

The start of this track is similar to the "Get Weapon" theme, perhaps suggesting its place as at least the second place you should visit after beating Metal Man's stage. Just then, the track officially starts with a dramatic melody with energetic percussion. The main melody has a string-like quality, and it uses a similar style to the main melody of Wily's Stage 1 theme (which is apparently a favorite sound of mine), while the shorter second melody has an echo effect. In a way, the dramatic track fits the jungle atmosphere of Wood Man's Stage, and it is given a good remix by Motoi Sakuraba for Smash.

This should be the first stage track you listen to in the game, and it makes an immediate impact. It's a roughly 40 seconds track divided into three parts. The first part is the main melody, which establishes the track's sound, a back and forth between two instruments at a fast tempo. The secondary melody wraps up the first into a more dramatic section before it resolves into a passionate and rapid solo in its final part.

Again, the boss fight theme consists of some repetitive beats with a percussive focus, but this one is miles better and less annoying than the first game. The intro and credits themes are good, and here is where the trend of the title them being an extension of the last game's credit theme starts. 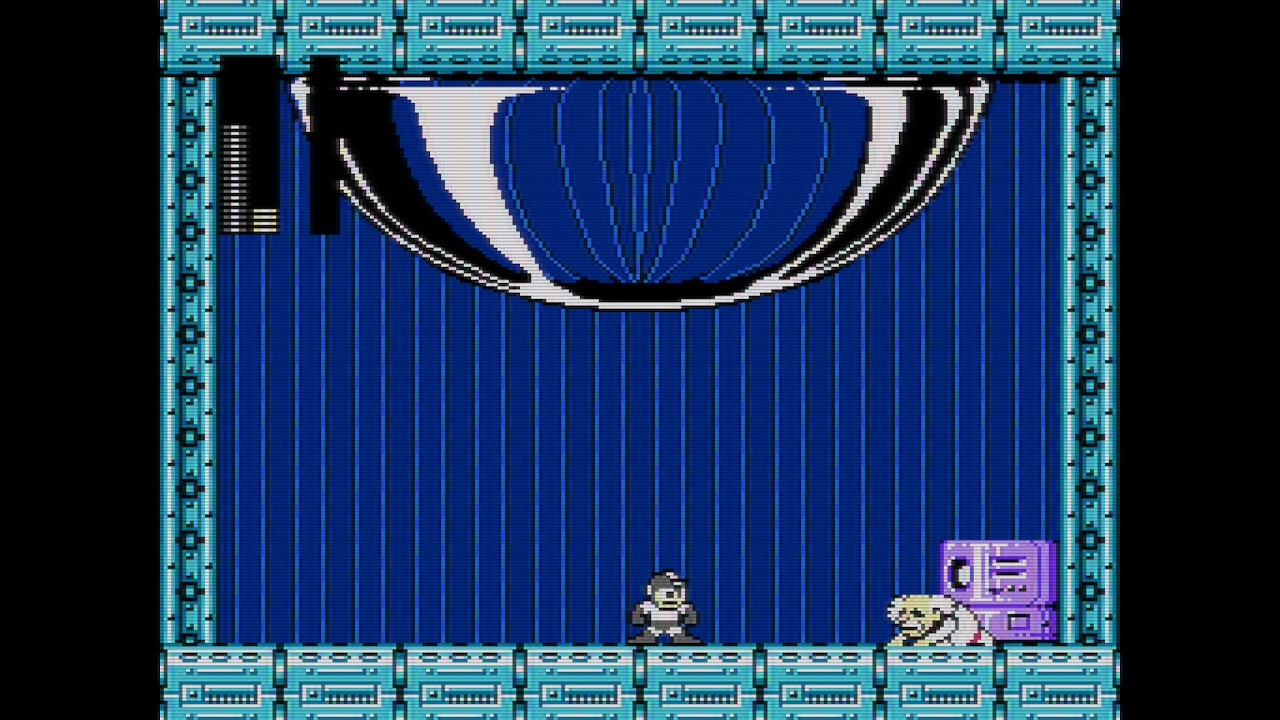 Better than the first game in every way, Mega Man 2 set the standard for all the other games to follow, and for some people, that standard was never beaten. Like with the first game, I can never stress the importance of this game to the franchise's legacy enough. However, I don't consider it the best in the classic series (spoiler alert, I am more a fan of the second game). I think that is far too easy and isn't balanced very well thanks to the power of the Metal Blade and the extreme brittleness of bosses to their weaknesses.

Regardless of where you place it, this is the game that proved the promise of this franchise, and all the rest owe it a debt of thanks. 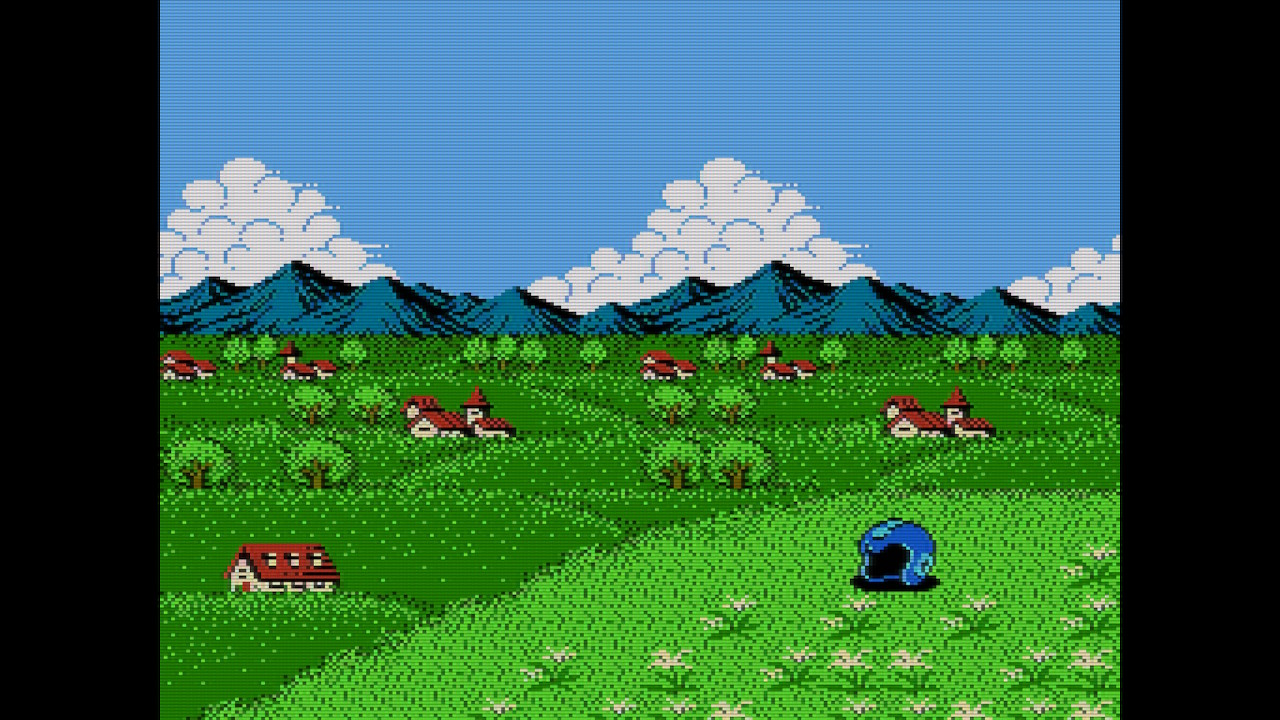 Rankings: Normally, this game will rank high in any list, but I am not going to have many sacred cows in my own rankings.