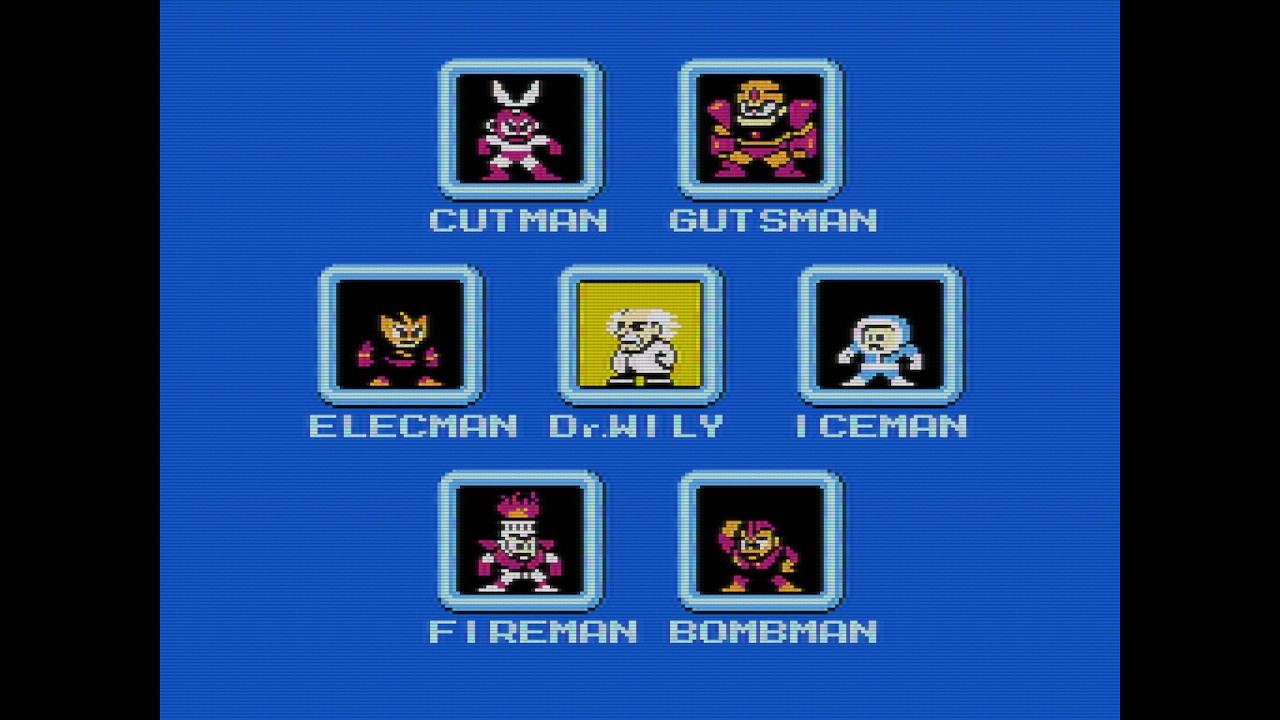 With four years of experience with the Nintendo Entertainment System, Capcom went on to create one of the most iconic franchises in gaming. As the starting point of the Mega Man franchise, its place in history is unrivaled regardless of its relative quality to the rest of the games. Still, even though it's easily eclipsed by the games that come after it, it's not as massive a gulf as between the first couple of releases in other franchises of the day.

There is no doubt that with its fewer stages, shorter music, and reduced graphical complexity, this was Capcom treading water with an unfamiliar style. That they created much of what defines the franchise at the start is amazing in retrospect, which is why this game is generally highly regarded both historically and within the fanbase.

It introduces the non-linear approach to level progression with the choice between 6 Robot Masters, as well as the central theme of gaining a Boss's weapon on defeating them. Then, you fight the evil Dr. Wily in a series of stages for the final part of the game, bringing back earlier ideas including a boss gauntlet at the end.

There is no beating this game in terms of sheer influence, but let's look at what it brings to the games:

With only six bosses and four short Dr. Wily stages, this is by far the shortest mainline Mega Man game, which is even more obvious when you consider the extremely short length of levels such as Guts Man. The stages vary in quality in both construction and graphics. Some have visually impressive backgrounds such as Bomb Man's stage, while most are completely dark like Flame Man's. 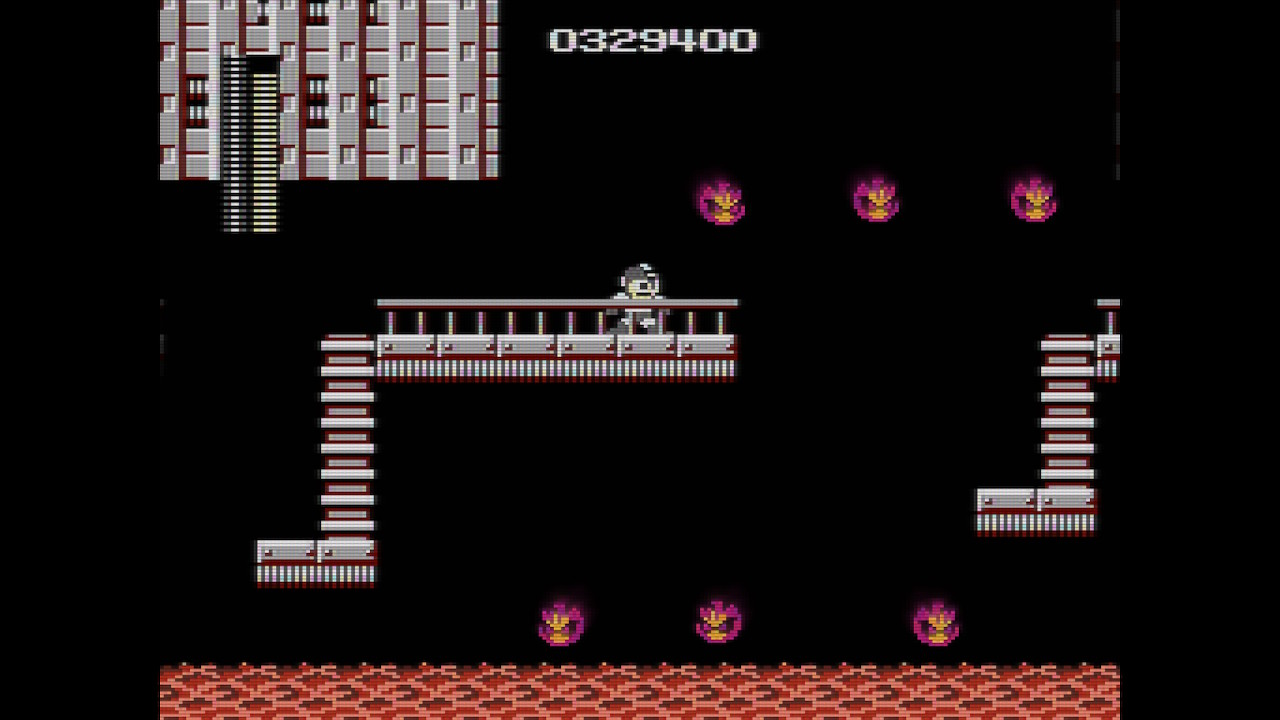 Knowing the kind of stage construction the franchise is known for, it's interesting to see the origins of many of these ideas here. Moving platforms, falling platforms, platforms that shoot, the vanishing rhythm blocks, deadly spikes, and many other kinds of obstacles are both repeated and expanded upon in the later entries.

Mechanically, the game feels stiffer and less precise than later games. Somehow, Mega Man feels sloppier to control and is not as refined in movement as he would later be in the series. This is evident in the several areas with the ceiling situated at a head-bumping length that stops your momentum or pushes you into a pit.

It should be noted that there is an important item in Electric Man's stage that you need Guts Man's weapon to reach. You can't beat the game without this item, which makes for an incredible waste of time if you entered Wily's Fortress without it.

Almost always the highlight of any game, Mega Man is all about fighting the Robot Masters and gaining their weapons, which are more exciting fights in this game because they are of similar size and theoretical power to Mega Man, which makes them exciting duels of might and wit. From the first game in the series, each boss provides a weapon that's the weakness of another. Using these weapons outside of battle is built into the stages, and they are fun to use and more powerful than your standard gun.

In this game, the weakness circle makes sense. Rock (Guts Man) beats Scissors (Cut Man) is classic. Then, it's not a stretch for electricity to be cut by cutting cables, ice (water) to be weak to electricity, with fire being evidently weak to water, and explosives not being safe with fire. Generally, using the correct weapon against each boss is a shortcut to victory, but I felt that this was a must in a few cases. 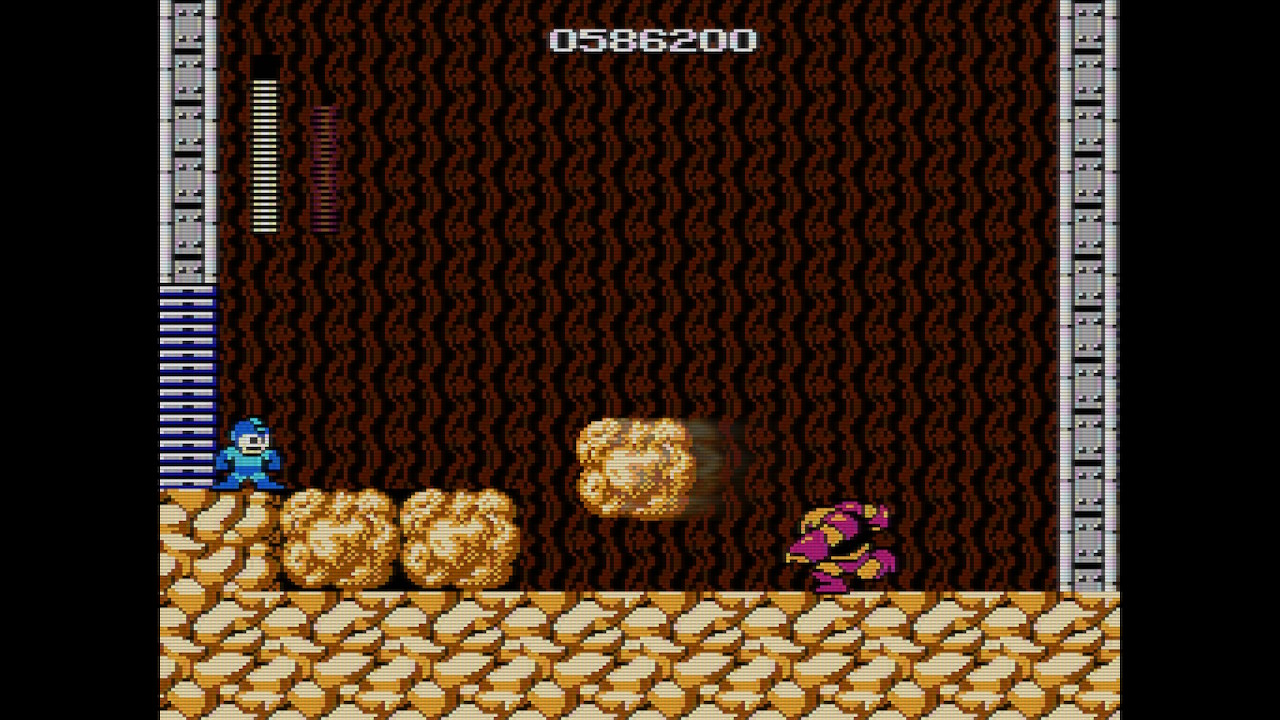 While Guts Man, Cut Man, and Bomb man are easily beatable with the classic lime shots, the rest are extremely annoying to fight. With only one pattern of attack for every enemy, you should be able to easily memorize it. However, given the game's mechanics, Electrical Man's weapon is very hard to avoid and it hits unfairly hard, while Ice Man and Fire Man just shoot too fast (I still can't avoid all of Fire Man's attacks to this day) and are annoying to fight even with the correct weapon.

I feel the unforgiving movement and lack of different attack patterns forced people to exploit the Electric Man's weapon against the Yellow Devil, an abomination of a boss that probably stopped kids from completing the game for decades. Just press pause rapidly after shooting a single bolt to his eye for repeated cheap hits. 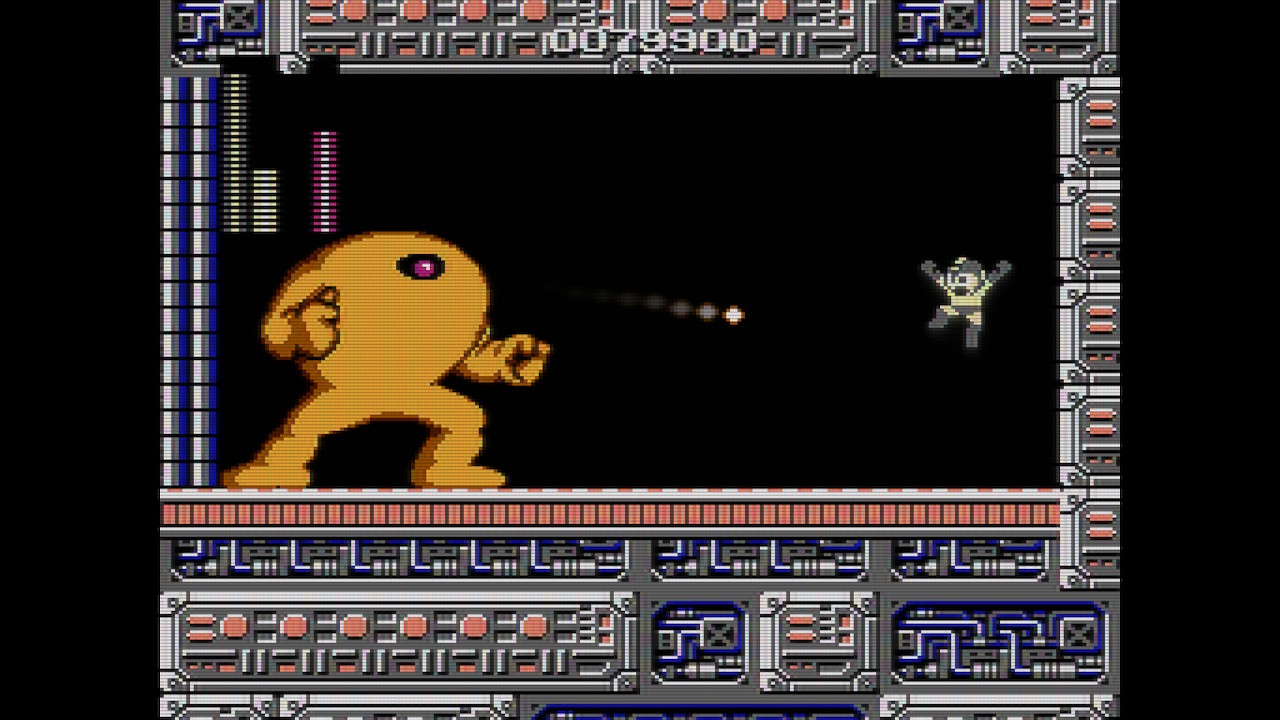 For me, the soundtrack of any Action game is a pivotal part of the experience, and this may have been partially formed through the excellent music of the Mega Man series. If it doesn't have catchy and blood-pumping music, then the action is simply not as powerful. As with everything in the series, this traditionally strong soundtrack started with the first game, which is one of the few that's headed by a single composer, the famous Manami Matsumae in this case.

Famously, NES games are known for their memory constraints, and the soundtrack wasn't free from those constraints just as any other aspect of the gamers weren't. This explains the short length of the actual composition of each track, but also the need to make catchy melodies that can withstand repetitive listens.

This is immediately apparent in my favorite track in the game, Cut Man's Stage theme, which begins with a sort of flourish before it goes into its recognizable melody. Then after looping the melody once, it's one of the few tracks in the game with a long counter melody. The entire unlooped track is about only 30-33 minutes of original music, but it's really catchy music. I am not surprised that this theme has been remixed so many times, including in Super Smash Bros. Ultimate.

Fire Man's Stage is a shorter track without the introductory flourish. It starts with a simple melody, ups the beat, and then responds with a short counter melody. It's relatively fast-paced, but not too much. I like this melody more than Cut Man's Stage, but the track does less with it overall. Ironically, its Smash remix doesn't add much to it and feels underwhelming as a result.

With Dr. Wily Stage 1, the music takes a more dramatic tune, which fits what you are doing in the game. The main melody is determined but sad and pushes you on towards a difficult encounter. Something the counter melody is not afraid of reminding you of, with the classic evil motif of Dr. Wily's castle reveal in the background.

It should be noted that the boss fight tracks are annoying repeating beats, which are for some reason going to be the same in most of the classic Mega Man games.

There won't be any game beating the first Mega Man game for influence. This isn't the same situation as games like the first Street Fighter franchise, where the first game only barely resembled or functioned like the rest. So, while it may be shorter and mechanically rougher than its predecessors, it still clearly laid the groundwork for all the games after it to follow.

It laid the groundwork for the game's iconic non-linear structure and boss copying ability, the Action philosophy in both stage and music composition, and in the construction of its imaginative world and great NES graphics. It was surpassed in all those elements by future games, but they wouldn't have started without this one. 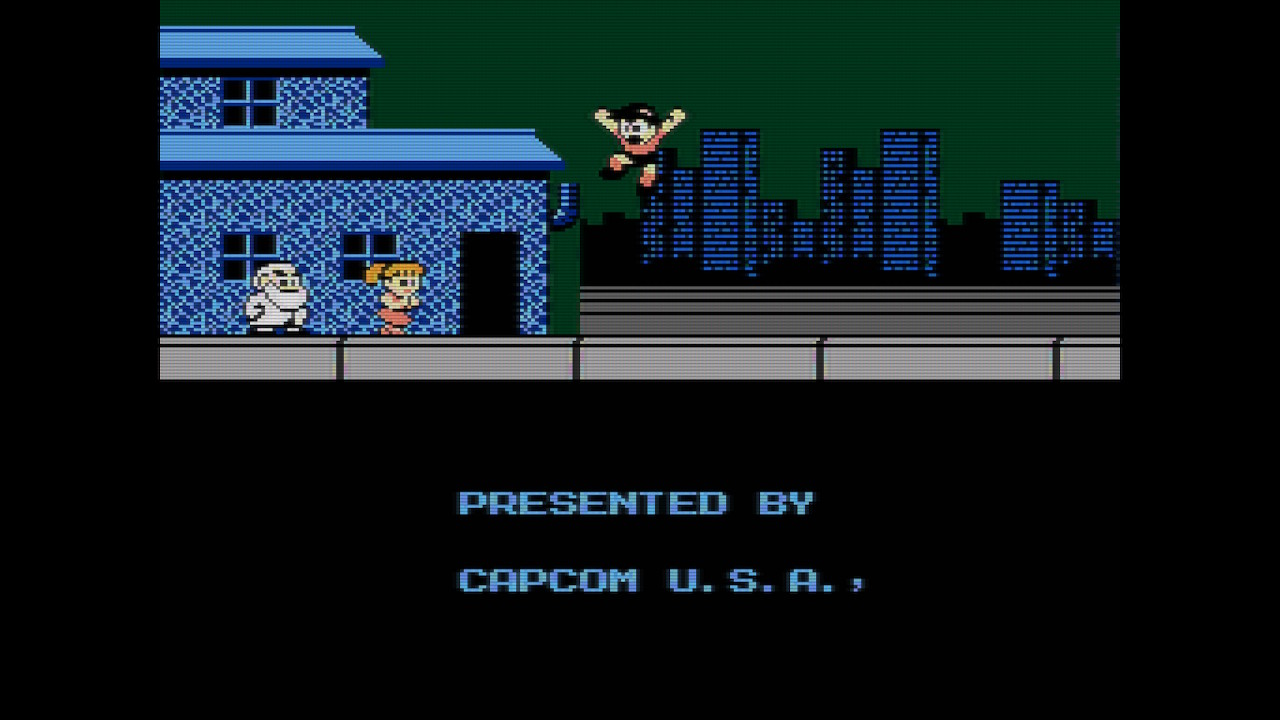 Rankings: While it won't stay first for long, it's suitable that the retrospective starts with the first Mega Man on top