10:20 AM on 04.30.2022 (server time)    0
I abandoned this blog post after seeing an Okami sequel was well trodden territory with both our own dephoenix and elsewhere.
After some friendly and possibly bias encouragement I then decided to post it anyway and hope reading experience be improved with times natural passing.
As a younger gamer I fancied myself as a connoisseur of the action adventure genre. I still do, but I'm much quieter about it. My blogs lack audio segments for now.

What is the Action Adventure Genre?
They are games that typically featured a hub overworld, a collection of tools and attacks, usually a lot of exploration occasionally rewarded with items, upgrades, thrills, mini-games and varying degrees of interactive content.
Features which, on the surface, would define every AAA game in recent times.
In older design fashion, some games had dungeons, some had levels stitched together by landscapes and hallways. Some had vehicle segments, some had platforming, some were short and others were not.
Okami is not a short action adventure game. 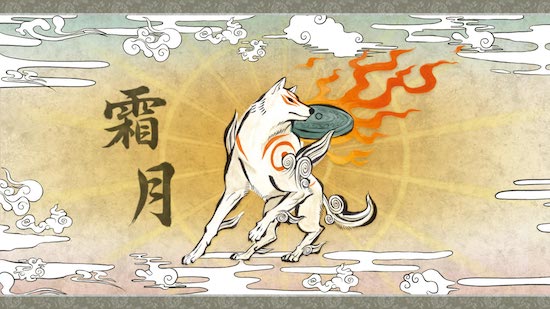 Games of this genre, developed on a limited budget, evade public attention, unable to match or innovate where heavy industry hitters had comfortably laid ground. Not intentionally just to be clear.
So when a new release, a fresh IP from a young studio, is considered to be a competitor for a mainline Zelda title, you ain't no small fry.
Why am I talking about Okami?

For its time of release and a good deal of time after, Okami represented the best the genre had to offer.
One could easily sum the game up as a series of standard tropes spun around some folklore monster narrative resolved by a big sword, all the while looking like a moving painting. I admit it does borrow more than it brings.
I love this game. I love it's stunted idealism and curious nature. It has as many locations, cutscenes, dialogue and optional quests as a 30+hrs JPRG.
The game has enough content for three games and now the mastermind behind the game claims they had to cut content that he believed would make it one complete game. I am at a loss. I am baffled. All now feels like a lie. I also understand. 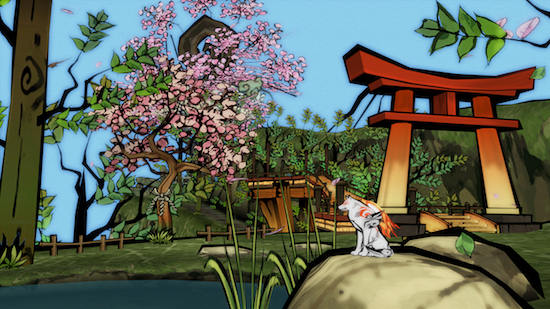 Okami had the disadvantage of direct competition with Twilight Princess upon release in 2006 (released close to six months apart). Both games had wolves, both had uneven difficulty and both were claiming to be modern staples of the late stage adventure genre. Both also got placed side by side in alot of end of year game awards, and in nerdy blog posts. Media loves a good showdown.
Whereas the budget of Nintendo can create such gaming revelations like two hookshots, shield snow boarding, realistic wolf fur and goat wrestling, Okami feels just happy to exist in a world of its own.

'This is the best we'll ever get' - someone in 2006, probably.
Okami's art style allowed the game to stand out but also disguise technical shortcomings (the draw distance got improved in the HD release). The flexibility and huge scale of the game all feels more digestible than one which aims for realistic in-game presentation. Early concepts of the game shows it was much too close to what Zelda had in mind but thankfully this course correction occurred.
Okami also feels like a hearty slap of 2006 goodness for better or for worse. The game is confident and huge, it has limited upgrades and abilities and has since seen an upscaling to match our modern shiny tastes/screens.
Starting the game means sitting through 15-20mins of cutscenes when this game begins. The game moves at a pace of its own. The HD release had skippable cutscenes, which was badly needed.
This is a game without voice acting. It only has that BanjoKazooie mumble audio to accompany text. This gets old and there is ALOT of text in this game.

Okami mirrors many of Zelda typical features. You have a sidekick piggybacking on your for a quick ride who does all the talking for you. You have a silent protagonist of divine origins and you will end up fighting an ancient demon of darkness.
Like Zelda it has a fishing mini-game, collectathons and village backtracking for fetch quests. You also gain the power to control the wind, set off bombs and create water/fire projectiles. Also there is a lot of cherry blossoms.
OK, okay! Enough about Zelda. Okami is its own proud beast. 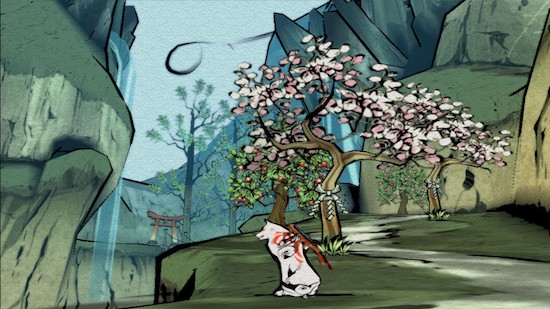 Okami had too much and I still want more.
This game really revelled in the genre trappings in vast quantities; towns, NPC dialogue, side quests, hidden areas of interest, dojo's for new attacks, children antic mini-games, dungeons under water, dungeons in the sky and dungeons inside large intestines.
The game really built a world that expanded and revealed more of itself the more you explore. Each area is corrupted to begin with, you need to cleanse the whole setting, make it green again, where when you revisit areas you have freed of evil land corruption, you gain benefits by talking to characters who would not speak or sell to you before. In Zelda Other games in this genre also had this. I think I like this game better. Some difficulty being rebalanced is a dream I have. 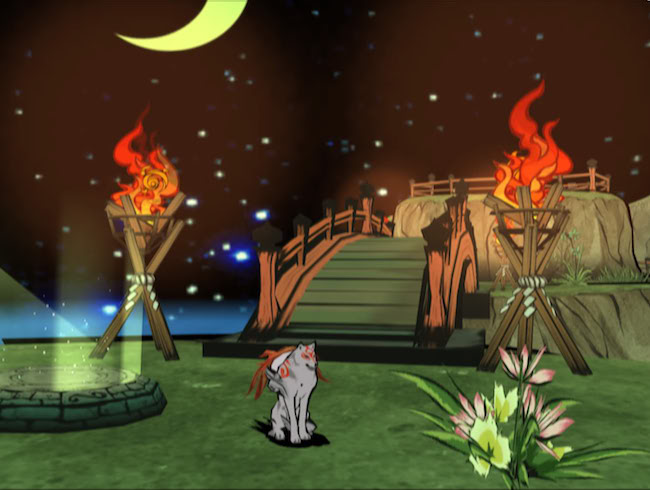 The games rewards are often small, particularly regarding side content, and the game holds back on thrills, saving them for the huge boss fights. This is a game that spreads good times and peaceful moments out sparsely, looking for all of the animal to return to a natural area, revealing a secret cave or resolving some townsfolk bad spirits or using your ink brush abilities to solve fashion design crisis. The game expects you to dig deep for some of these quieter nicer moments. For my personal experience, that meant greater immersion. These moments won't be directed to via journal and often the game hides them in droves of NPC dialogue.
And yet the game director comes out to the public world and announces he didn't get to do enough with the game. Now this may have something to do with 2006's hardware and budgets but I think he did pretty damn well with what he did.
The story is entertaining and even has QuickTime events (with legit reactions to misses) but I don't think it will be the thing that drives on the players.
You also have a bark button and a digging feature. I do give points for charm. 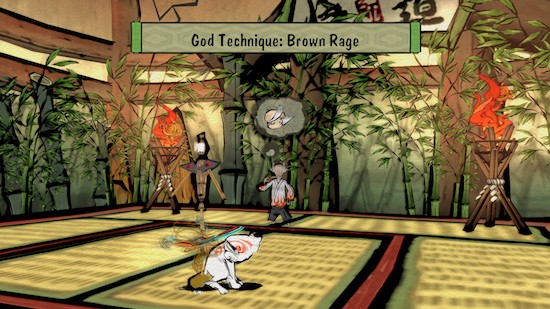 There is a mini-game where you dig underground usually guiding someone and using bombs to blow open caverns and it wears out its welcome as the only noticeable difficulty spike.
Certain action adventure games developed character weight when the protagonist was a bipedal, each step bought by high production values, yet feels a little too stiff, scripted and inflexible compared to the swift and breezy wild action feel of Okami. I love the sounds of this game, the sounds of the padded dog feet, the sounds of the grass and the light wistful sound when you get a running boost and I like the way the birds react when I chop a tree.
There is a twin owl, fire and ice boss fight later in the game that is epic in scale and sounds and will remind you of older games of the genre that it had to have been inspired by.
Why do I think a sequel is okay?
In an effort to appear better researched and not expelling words to support my own opinion, I watched several gamer reviews of Okami and they liked it but did not love it. Infact they felt the game was quite lacking because by the time you've crossed the 25+ hour mark and still have 4 dungeons to go, you've seen pretty much everything. You won't be marching onward in order to see the story get wrapped up, the combat runs dry quite fast, and the celestial brush runs out of impressive feats halfway. The game is padded but it feels like it was out of love and not about putting 50 or so extra icons around every section of the map.
Where modern action RPG's have made everything part of a grind to build up exp or currency to progress or just be more equipped, simplicity can be refreshing. 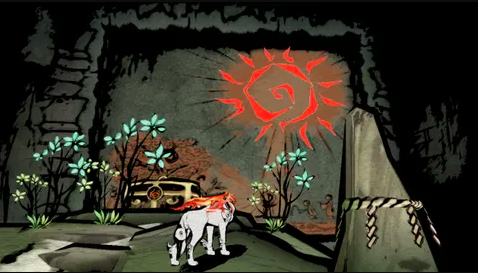 Now you can have too much of a good thing. Okami skirted this border depending on who you ask, but for me to find out the lead designer says he has more story to tell (presumably gameplay ideas too) that rocks my proverbial boat. Give him all the fundings.
Gamers still sing about the visuals and their timelessness because the same can't exactly be said for the gameplay, but it's perfectly of its era and demonstrates a better grasp on doing more while keeping it simple. No need for a yeti boss fights, a ridable beyblade or a mirror shield. 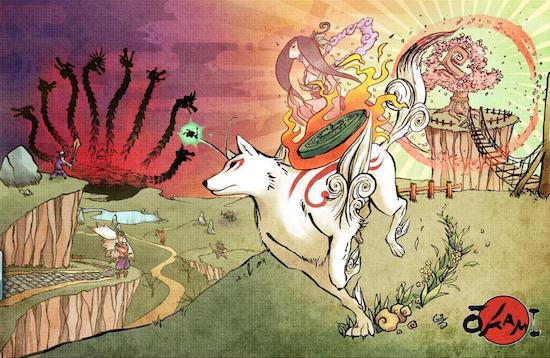 Okami shows a great understanding of these genre buildings blocks, stacked in the same shape as a proven success, but adjusted, coloured a shade different and turned edge outward to showcase a different approach even if the style is expected to do a lot of the heavy lifting.
...I think I was supposed to have a point or something. Let the original creator take another stab at this beautiful media he pulled out of thin air. I am unaware of how many members of Clover studios currently exist at Platinum games or if they even have the copyright ownership to continue the franchise but nowadays we like revisiting what worked before so why the hell not.
It is a late era PS2 game, warts and all. Modern systems offer more and I've wanted them to take another crack at it ever since but what I want doesn't always generate big bucks on the business side of things. Like everything else that gets a second life, the original is still there and is glorious, that usually gives me comfort when even the original creator fumbles the legacy. I'll fall on that sword alongside him.
Login to vote this up!