Warstride Challenges (originally called Warcry Challenges) is a first-person shooter that combines the modern arena shooter combat of new Doom with the level structure and time trial nature of TrackMania. The game first released into early access on April 19th, 2022 for PC, and the game is expecting a 1.0 release approximately one year later according to its Steam page. The game has only been out for a few days, but it’s not hard to see the end product with what they currently have, and what they currently have is an absolute blast.

Structurally, this game takes the form of TrackMania. Levels are one-off linear ordeals about getting from point a to point b in the fastest time possible. Both games (for me at least) run well, have tight and precise controls, and have instant level restarts, which I think are necessities considering how often I need to restart a level for the sake of trying to craft “The perfect run.” The levels for both games have medals to try and earn, and better medals are rewarded for faster times. Finally, both games feature a way to race against the ghosts of other players as well as your own ghost. As a fan of TrackMania, Warstride hits on all of the technical features I want out of a time trial game.

While there are a lot of similarities to TrackMania in terms of its level design and structure, there are also a few differences. For starters, each level has five difficulty modes (only two are available as of writing this), and each difficulty mode actually makes a surprisingly large change to the level in such a way that makes each difficulty feel like its own level. Whether it be going through the level backwards, adding more enemies, changing the weapons, adding or removing map elements, or more, each level feels like five (or rather two at this current time) levels. Each level also has a secret skull to find, and finding enough of them will unlock secret levels. The game also features some alternative levels here-and-there that range in quality. Some are focused on killing enemies or exploding urns as fast as possible while others are platforming-only. My favorite alternative levels are the BFL levels, which combine five normal levels into one long level, and trying to keep a consistently “Perfect” run through five levels consecutively is tough but rewarding. 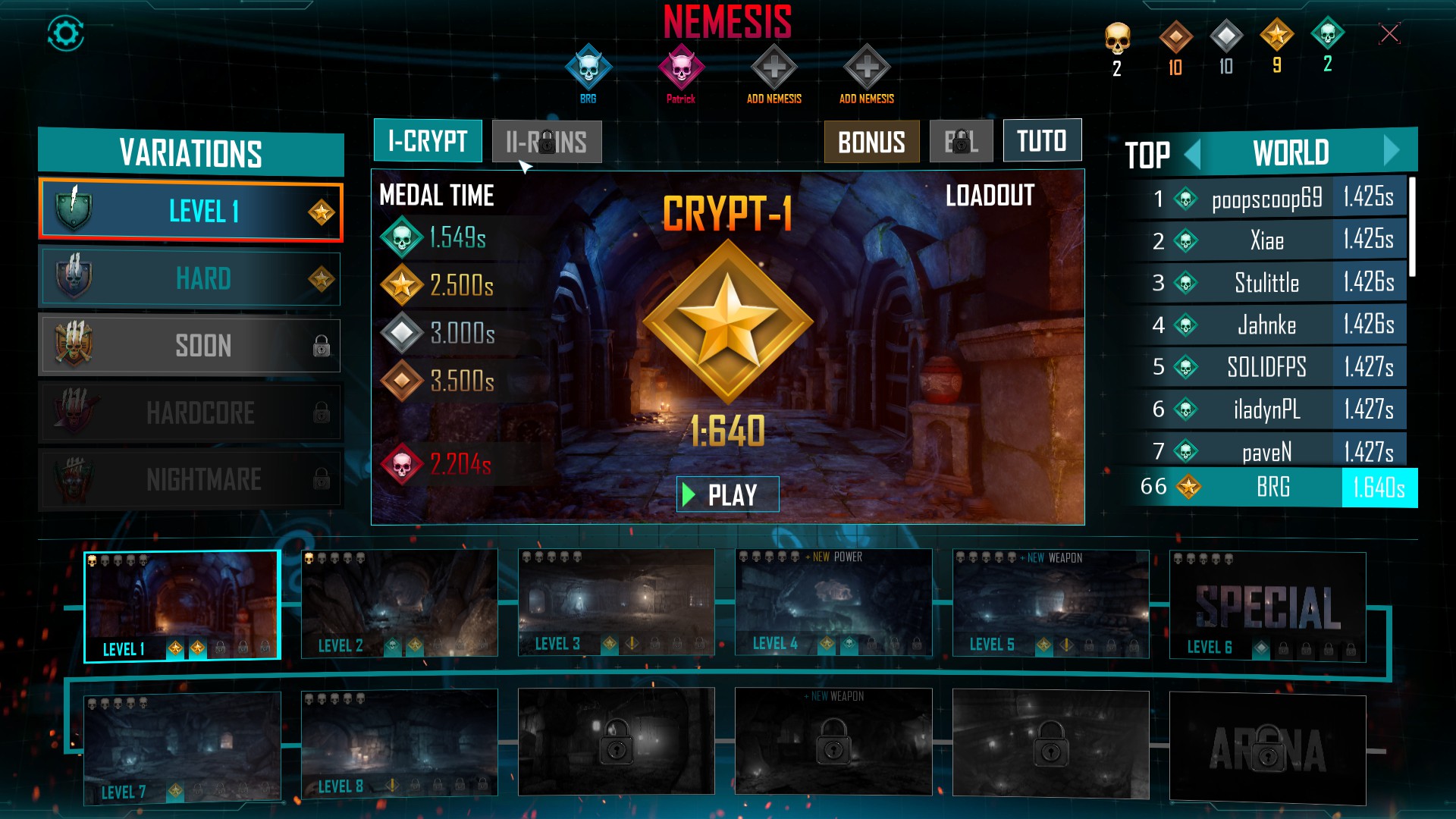 Every level variation feels different from its original form, and every variant has its own medals to achieve.

Not all of the similarities to TrackMania are positive ones, however. Some of the tutorials are scattered throughout the levels rather than front-loaded at the start of the game, and not all of the tutorial levels are replayable in the tutorial level menu. Where this game is really lacking currently, though, is with the community level side of the game. Community levels play a huge role in TrackMania, and while there are tools and some community levels available here, I think the game could do a lot more more to improve it. I didn’t dive too deep into the level editor (I’m more of the playing type rather than the building type), but from what I played I could only find bland map elements (instead of the more jungle temple-esque map elements of the developer levels), and I couldn’t even find out how to do basic features like erase or undo. Also, the current menu for navigating user levels is extremely basic and will become less intuitive as more levels are added. As it stands, the community level side of the this game feels like a side addition rather than a main feature, and while I think this is just the result of being an early access launch rather than a fundamental flaw with the game, I think building up this side of the game will be important for Warstride’s future.

As for what happens within the level, that’s where Doom (or whatever fast-paced arena shooter you want to reference) comes in. Since TrackMania is a game about trying to be as fast as possible, it only makes sense to take that philosophy and apply to a style of gameplay that’s about being fast. Fortunately, I believe this game has everything needed to deliver on that fast gameplay.

For starters, Warstride offers a good amount of combat and platforming mechanics to play around with. B-hopping is the main way of getting and keeping speed, sliding allows for getting under low entryways (and looks really cool when looking left or right), slow motion slows down time to line up headshots, shockwave can be used to blow open doors and large groups of enemies, jump and boost pads allow for long or high traversals, and the game even offers the ability to do a backflip which seems completely unnecessary but stylishly welcoming. The game also includes basic puzzle elements like levers and door switches to shoot, and while some of these elements can mess with the flow of the level, they still add an extra level of complexity not seen in TrackMania.

As for the combat, the game currently includes a surprisingly high amount of enemy types and a couple of different weapons. What’s interesting about the combat in this game is that difficulty doesn’t come from how hard enemies are to fight but with how to deal with each enemy in such a way as to not disturb the flow of the run. Enemies defeated me not by them killing me, but by me not dispatching of them efficiently. The different enemy and weapon types essentially break down to weak or strong, and I had to not only plan out what weapon I wanted to use on each enemy, but also plan out ammo so that I either didn’t have to reload or reloaded in quiet parts of the level. All enemies have to be killed in order to complete the level (essentially acting in a similar capacity to the checkpoints in TrackMania), so skipping enemies isn’t an option. 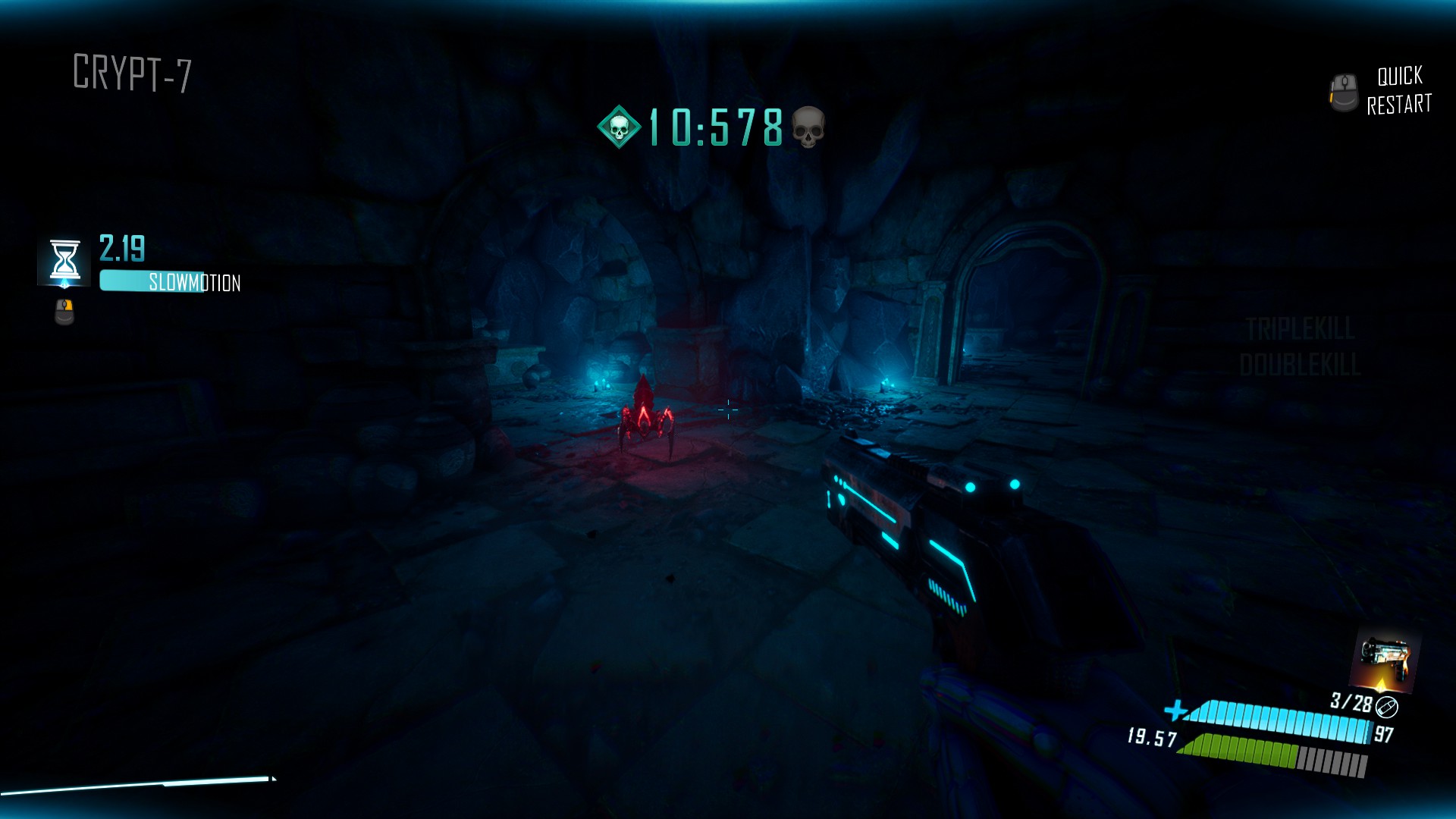 These little critters are weak, so there is no point in shooting it with a higher-powered weapon.

The two key words that tie the platforming and combat together are ‘speed’ and ‘flow,’ and boy howdy does this game have both. This game feels like the end of a Superhot level where the level replays at normal speed, except that is the speed of this game. For me, this game converts white knuckling to a full body experience, as I often found my feet pushing into the ground, my legs and head tilting to the movements of the game, and my fingers hard-pressing my keyboard. This game is mentally exhausting for me, but having this intense reaction to this experience is one of the many reasons why I love it.

To help out with the gameplay, Warstride offers a ton of gameplay options to tailor the experience. Jumping options, crosshair options, equipping weapon options, and more can be chosen to help with how to deal quick death and quicker times. One of the features I found useful was turning off all of the blood splatter as I found the blood to be rather distracting. It also helps that the controls are tight and responsive, which means I am able to focus on the platforming and shooting rather than focusing on managing the controls.

What all of this leads to is a planning out of each level to an exact science. For each level, I planned when and for how long I jumped and slid. I planned on when to use my slow motion and shockwave abilities if I had them. I planned on how I would kill enemies, what weapon I would use on each enemy and when to switch weapons, and how to fully utilize each weapon so that I could avoid reloads. I even planned how I wanted to shoot door switches if that was something worth planning. Trying to plan all of this can be overwhelming, but plugging away at a level over and over and eventually getting that “Perfect run” is not only incredibly rewarding, but also capture-worthy and really cool looking as well.

In regards to being an early access release and what should be added leading up to 1.0, I think the biggest thing to focus on is fully developing the community side of the game. I want to see community levels be as feature-full and important as the developer levels, as I think that’s where the longevity of this game will lie. There is also, of course, adding in all of the other levels and difficulty modes to the developer levels. Outside of that, I think adding a few features like melee, double jump (as an ability, not a core movement component), and some sort of video replay feature to save and share replays would be nice. I didn’t really encounter any bugs or technical issues which I appreciate for an early access release, so it’s pretty much about adding more content by this point. 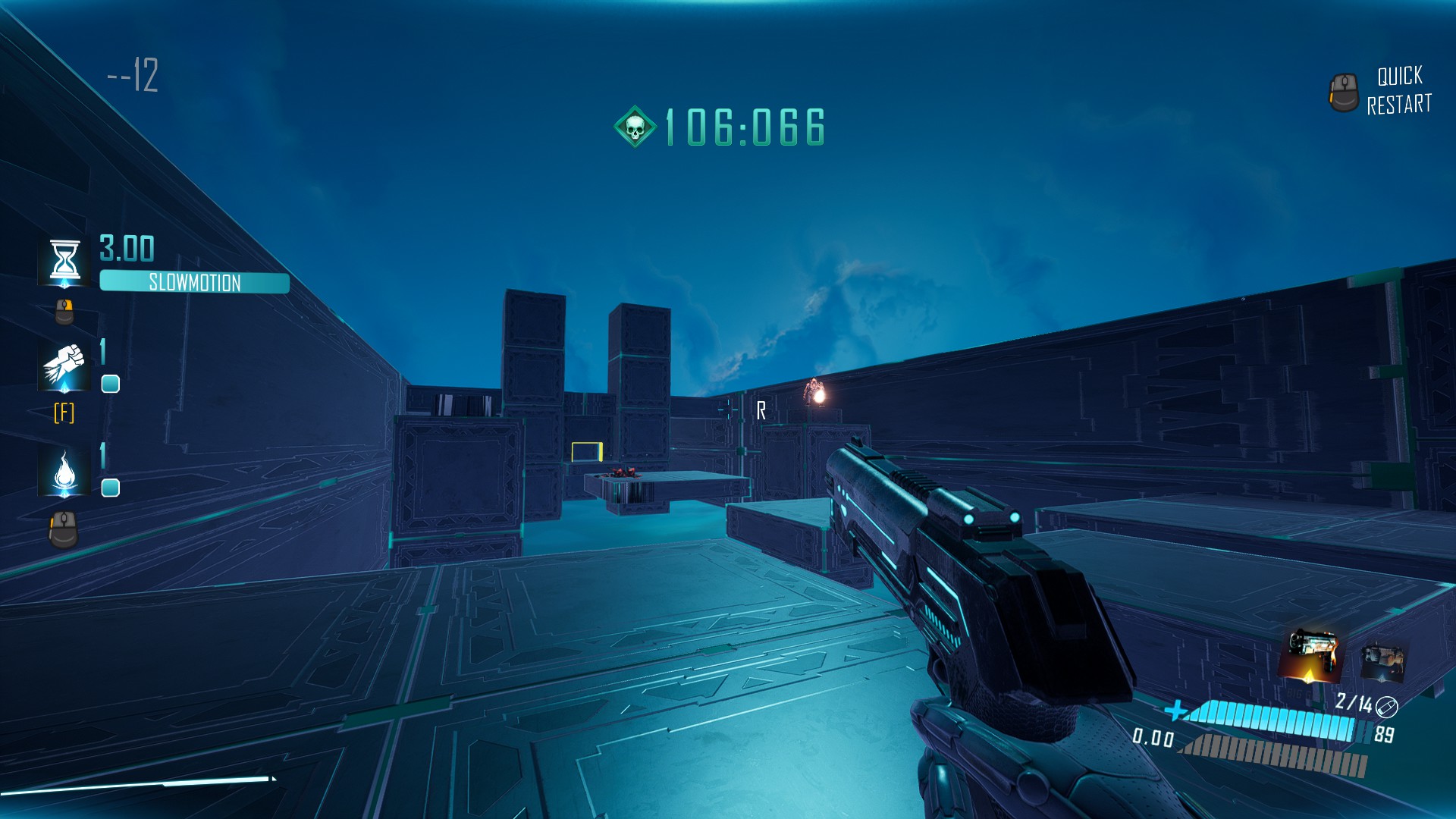 In the end, Warstride Challenges is an absolute blast. It takes what I love about TrackMania and applies it to an arena shooter, making an experience that is equal parts frenetic and rewarding. Its current early access state is pretty solid, and I hope to see the game develop well into a 1.0 release. I’m going to sit on this game until the community level features are more developed, but there’s still plenty to do with what’s currently offered, and I recommend checking the game out even in this early state.