As hard as it is to imagine now, when the Amiga line of computers came on the scene in 1985, the Commodore 64 was only three years old. And, contrary to common misconception, the two Commodore personal computer platforms coexisted all the way until 1994, when the C64 was finally discontinued. The Amiga line would go on another two years, finally getting its plug pulled in 1996.

What makes its early debut so impressive is that when you go back to personal computers of the early to mid 1980s, they feel, for the most part, like computers from the early to mid 80s. Interfaces were clunky and complex, tasks were difficult to achieve, processing was painfully slow. And, by and large, the specs out of the box were what you’d be working with for the duration of the hardware’s life cycle.

Amiga turned a lot of these institutions on their head – they came packing 16 or 32-bit processors in 85, packed in 256kb of RAM (compared to the 64k for which the C64’s name was derived), and incorporated a mouse-based, visual click operating system interface; one that, not unlike Windows, is still being used and updated to this very day.

If you’re wondering why any of this matters, Retro Games LTD, the guys behind 2018’s THEC64 Mini (then later the full-size variant THEC64) are at it again. This time they’ve turned their attention toward the Amiga in an all-new piece of miniaturized, emulation-based plug and play hardware: THEA500 Mini.

The naming in this one is a bit complex, so let’s break that one down right away. The first Amiga from 1985 was called the 1000 – the 500 didn’t come on the scene until 1987. We’re guessing this was the model for which the new mini classic edition was named because it quickly became the best-selling Amiga model. 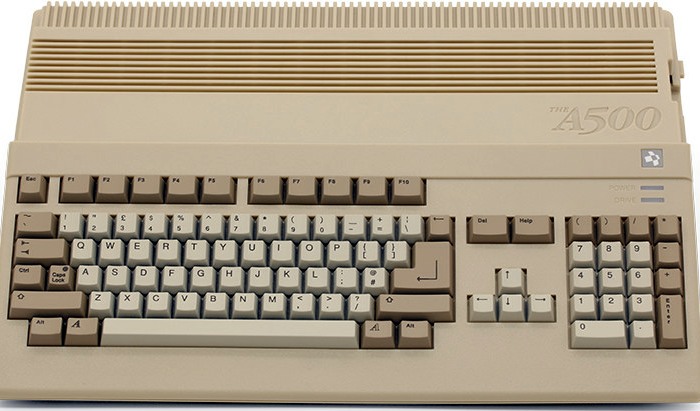 However, while THEA500 Mini looks just like the original Amiga 500 (only much, much smaller - 10x7x3 inches) and boasts perfect emulation of the Amiga 500, Retro Game LTD had the presence of mind to design the new architecture around the later Amiga systems as well including the Advanced Graphics Architecture (AGA) of the A1200 (which didn’t come out until late 1992). Why does this matter? Simple – it gives the player access to Amiga’s entire game library. And like most long-standing personal computer lines, it is a massive library.

Unboxing and Setting Up

When you dig into THEA500’s box, you get the HDMI output, high definition console (25 games preinstalled), USB gamepad, USB optical mouse (each with 6-foot cords), HDMI and USB (A-C) cable and documentation. Everything you need to get underway except for the wall adapter, but in this, the era of the smartphone, having a cube or two laying around is all but a given.  Please note that the recommended power brick should output 5 volts/ 1 amp.

Setting the system up is as simple and plugging it into the wall, running the HDMI to the back of your TV and plugging the controller and mouse into two of the three available USB 2.0 ports. That’s all there is to it – game on.

The graphical user interface harkens back to some design cues of the original AmigaOS but much more simplified and user-friendly. Out of the box, the system comes with 25 games from which to select from a rotating carousel. Games launch with console-like efficiency. However, some (as is commonplace with computer gaming) request that the player input a name – for this an onscreen keyboard that can be operated with the controller is but a button-press away, or that third USB port can be used to support any USB keyboard. That keyboard on the unit is much smaller than it looks and is, of course, non-functional. Also of note – THEA500 Mini is designed to support most USB controllers out of the box so your favorite PlayStation or PC controller can likely follow you over). 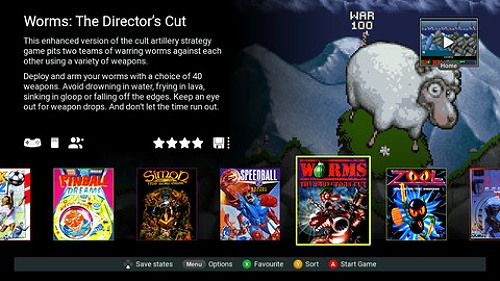 As is all but standard fair these days with retro minis, the unit, which outputs in 720p with selectable 50/60Hz refresh rates (meaning the same unit was released for PAL and NTSC regions) comes standard with a variety of filter and aspect ratio options to play with.

If, like us, the original Amiga glory days managed to pass you by while you obsessed over NES then Genesis and SNES then finally PlayStation, let us assure you that gaming on the Amiga line had ironed out all of the rough spots of its computing contemporaries. 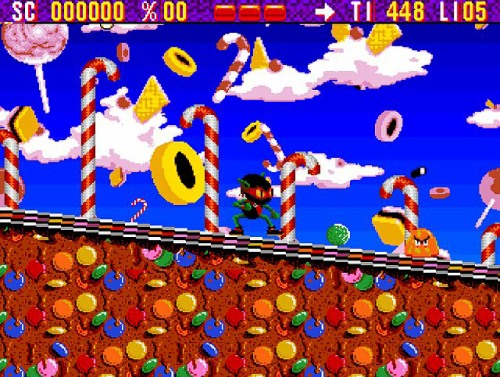 The polish that really became standard fair by the latter portion of the 16-bit era of consoles is present here in terms of graphics, scrolling, control and difficulty. The 25 games selected represent a pretty decent sampling of the spectrum – with everything from a flight sim, a pinball entry, Worms, a few race titles, pool, Battle Chess, California Games, even a couple of mascot platformers in Titus the Fox and Zool: Ninja Of The “Nth” Dimension.

More useful than trying to tell you which of the included games will be your favorite, let me instead comment that we’ve tried each and every one and they ran beautifully. We don’t have an original Amiga around here for comparison sake, but found no artifacting, glitches or tearing. Everything felt tight, precise.

The included controller is surprisingly adequate for gaming as well. We spent a lot of time with THEC64 Mini and, while the second incarnation of the Competition Pro joystick (with the microswitches) was a vast improvement over the first, often found that the precision required for many games was additionally frustrating due to the imprecise nature of the joystick concept.

Such concerns are null and void this time around. The 8-button gamepad is easily on par with what Sega and Nintendo were doing at the time. In fact, we’re impressed enough to where the long-term plan around here is to use this new pad on our C64 Mini when we tire of the Amiga. Going back with this type of input precision should make a lot of those games much more playable. 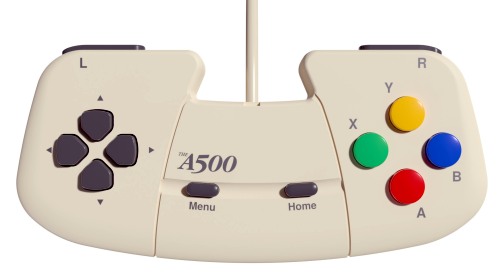 Save states are also present with THEA500 Mini, so starting over again at the start of each play session is completely left to the user’s discretion. 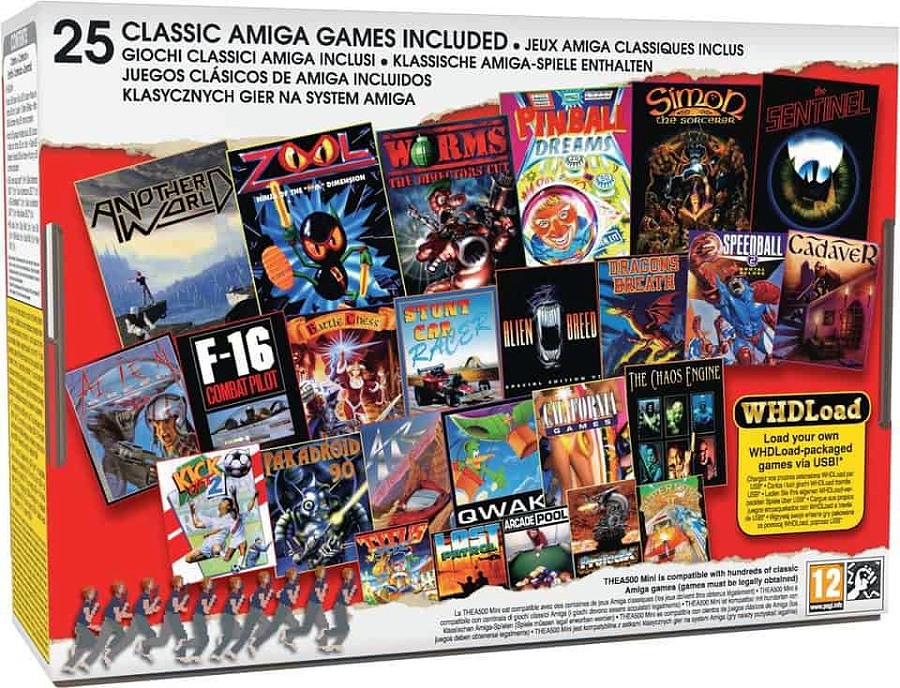 What separates THEA500 Mini (and THEC64 family) from just about any other modern plug-and-play retro mini console on the market is the ability to add games from the system’s library. The process here is drag and drop files onto a USB drive simple using the WHDload package, which, when installed includes a free 26th game in the first person shooter Citadel.

In the event that you tire of the included titles, do keep in mind the Amiga has amassed a library of some 2,200 official games and estimates placing the real-world number closer to 6,000.

THEA500 Mini takes everything we’ve come to expect from Retro Games LTD (excellent build quality, bulletproof performance, plug and play simplicity, spot-on emulation) and elevates it to the next level. 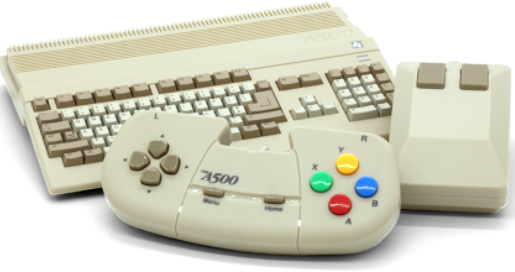 The only downside we could find after two straight days of playing nonstop is that the $140 MSRP places it at the top of the modern retro plug-and-play hardware chart. The cost of entry might be a bit steep for some in these trying times but the way we look at it is video gaming hardware remains on the lower end of the entertainment spectrum in even the worst case scenarios (after all, the PS5 is $499 and Sony can’t get one to reach a store shelf due to demand).

Another way to say it? If you can swing the $140, you will find countless hours of quality gaming entertainment here – and, for us, across a library of titles that we had no prior experience playing. Like traveling back in time. If you’re a fan of retro gaming in general, this is a must-buy.

And though this next one is a long shot – we’d love to see a further iteration of this hardware available in the CD32 shell as well. What’s a CD32 you ask? In September of 1993 Commodore entered the console video game market by releasing their own CD-based 32-bit home video game system based on their Advanced Graphics Architecture chipset from the Amiga 1200 personal computer – exactly like the setup of THEA500 Mini. A CD32 Mini, even if it was no different from the internals and game selection of THEA500 would be a console collector’s dream. 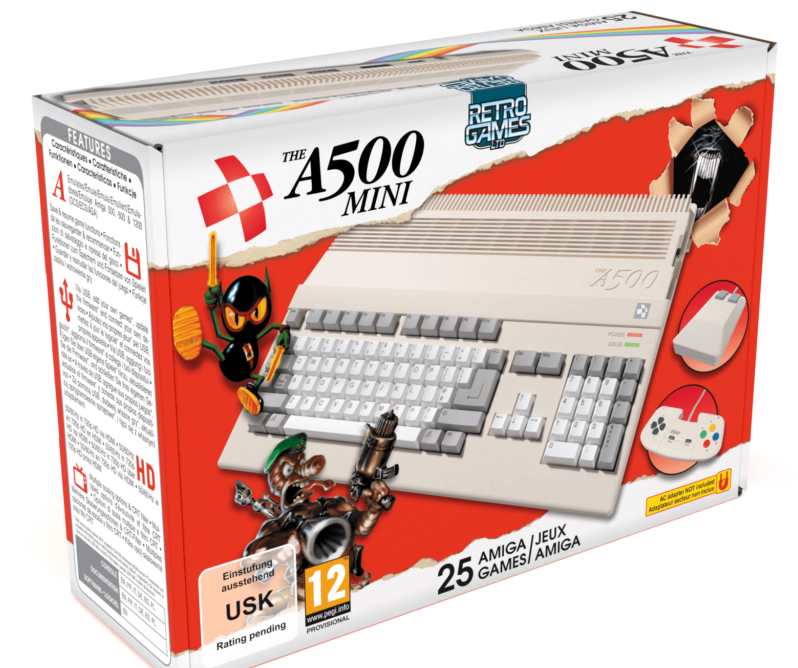