What would Resident Evil play like if all the enemies in the game were mobile and aggressive dinosaurs? Not very differently, as the first Dino Crisis game demonstrates. If you were not aware that the game was actually made by Capcom, you would be forgiven to think that this is the most blatant Resident Evil clone that ever existed.

Since it was made by Capcom, it survives the sin of unoriginality through experience and provides a really solid PS1 Survival Horror experience, but it suffers from lacking the trapping and atmosphere of the Resident Evil locations. 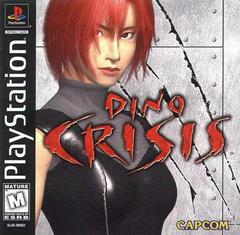 "I must discover the true purpose of this project, before irreparable harm is done"

The game begins with a squad of special operation agents infiltrating an island to extract a presumably dead genius scientist, Dr. Kirk of the famed "Third Energy" theory, a gibberish concept that is used as an excuse to bring dinosaurs into the game.

When reaching the island, a member of the team lands awkwardly, and then in a scene right out of Jurassic Park (expertly rendered through the technology of the time), is gobbled up by a T-Rex. Soon, the rest of the team realizes something is terribly wrong on the island, and find themselves under threat by carnivorous dinosaurs. 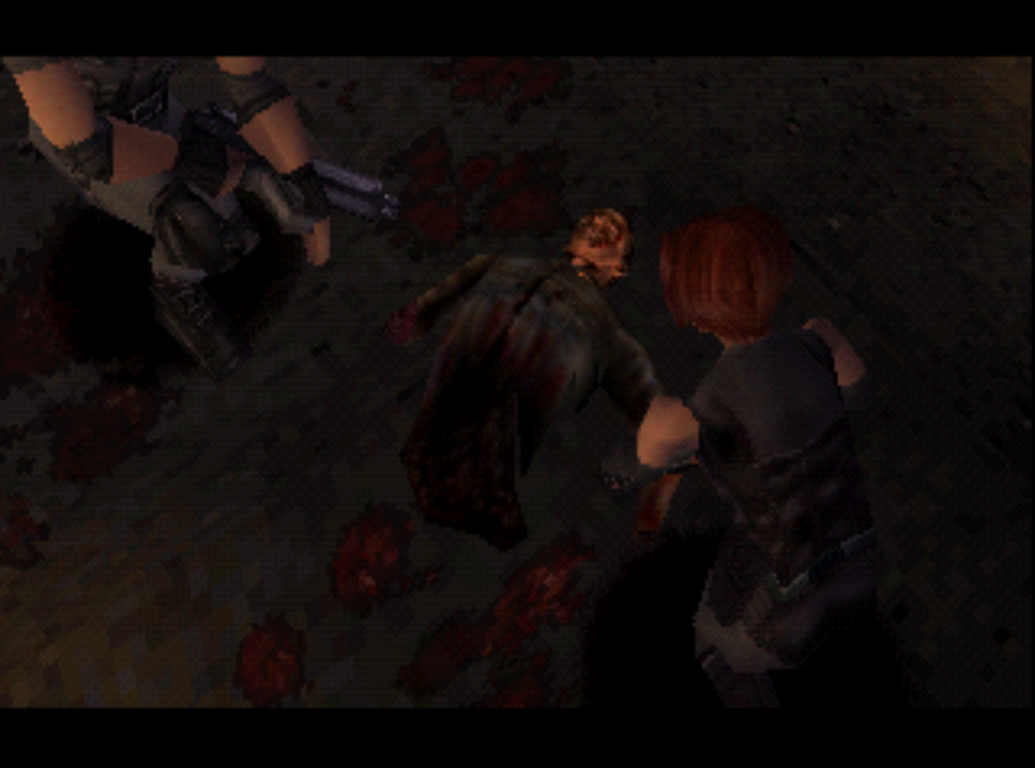 Controlling the rookie of the team, Regina, you search through the island's research headquarters for Dr. Kirk, as well as a way out of the island while trying to survive being devoured by pre-historic beasts. It's supposedly riveting and tense stuff, except when the characters converse with ridiculously cheesy quips (that are not as ridiculous as the first Resident Evil game though).

The game progresses similar to the other more famous Capcom games, by finding clues, and codes, and slowly uncovering what happened on the island while nearing your escape. What holds Dino Crisis back is that the story and lore are just not as interesting, and the stakes are more minimal as well. Dinosaurs, no matter how frightening at the moment, do not have the same viral and societal fear factors as zombies, and the sterile research station doesn't do the heavy narrative work that the mansions did in Resident Evil.

One thing that the game does well though is incorporate the rest of your team in a meaningful way, offering you choices in how to tackle key points in the story, even affecting the ending at the final juncture of the game.

"This wasn't much of a fight. I don't think the guards hit anything before getting sliced and diced"

While the game's story doesn't have the same interesting trappings of the Resident Evil franchise, it sure does copy its gameplay to a tee, which is a disappointment when you consider the fact that you are dealing with supposedly deadlier enemies.

Due to the PS1's technical limitations, the dino enemies are mostly trapped in individual rooms, which makes the most efficient strategy to run through the game is to run and dodge the enemies while going from to room. However, it should be noted that sometimes, the dinos will suddenly rush into the room or corridor you escaped into (showing up in a minor cut-scene), and that can escalate into a deadly battle soon. 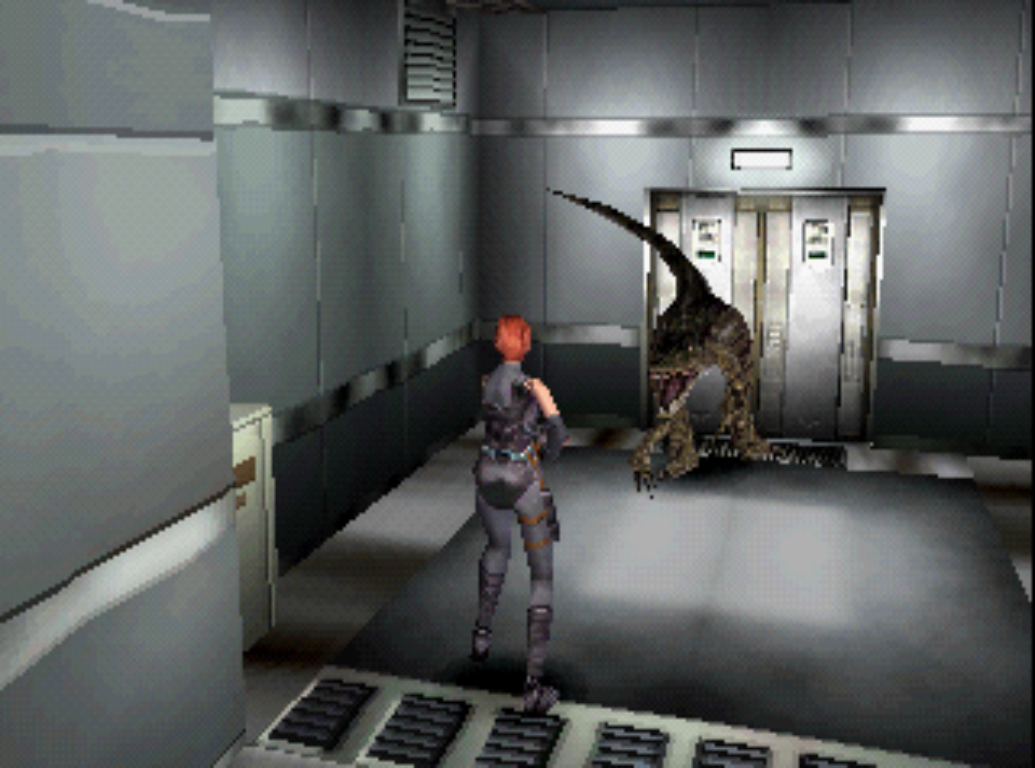 The smart thing is to run

That's because you are outclassed in your fight against these beasts, lacking in ammo and firepower, you cannot hope to kill every enemy you face. Still, when cornered, you can always trust the little ammo you have to dispatch a dino or three, and then heal up the damage, but don't expect to survive long if you try and kill every enemy.

To be fair, even though the game functions mechanically the same as its zombified inspiration, with solid but rigid tank controls, auto-aiming, and the ever-handy quick turn button, the game does move at a slightly faster pace. This leads to some exciting chases where you can also use the environment, closing laser gates behind you, to impede the scaly predators.

Still, if you imagined that having faster and stronger enemies being the default will fundamentally shake up Capcom's PS1 Survival Horror formula, then you will be disappointed by the result here.

"I'm in... This place is so deserted. I have a bad feeling about this!"

With its slow and clunky gameplay, fixed camera angles, and fixation on puzzles, I have always argued that the Survival Horror genre is simply a more action-oriented form of Point-and-Click Adventure games. Think about it, you run around rooms, gathering clues and items, and then using them in other rooms to solve puzzles. All the while, the action is intermittent and your best option is almost always to flee.

In Dino Crisis, the puzzles are really good and fit the location and theme of the game much better than the nonsensical puzzles of the Arkley Mansion. Attempting to fix a generator, hack into a system, reformat an idea, or formulate a scientific McGuffin. 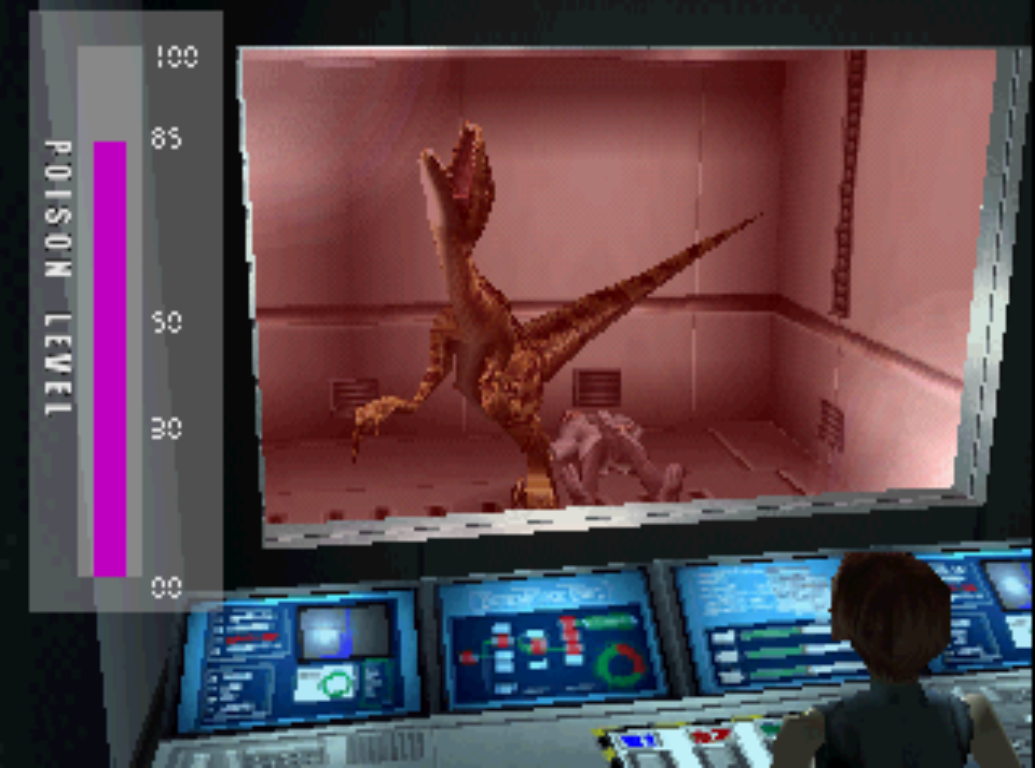 One puzzle allows you to suffocate one of the scaly bastards

These are objectives that make sense within the context of the game, and it feels fair in how you are supposed to figure them out. Clues are accessible in books and charts visible in the environment, and hints are not too obvious to spoil the solution.

Ultimately, the majority of your experience would be running around the island's research base, trying to figure out how to get deeper into it, and resolving the obstacles in your path. Rarely was I frustrated by this part of the game, and rather enjoyed the puzzles, which didn't require much backtracking to deal with.

"This isn't a joke you idiot. We were just attacked by a big ass lizard!!"

Releasing at the tail end of the PS1's cycle, Dino Crisis came at a point where developers had a better grasp of 3D graphics, which shows in Capcom's dedication to making all environments and characters with polygons.

As expected from a game its age, the character models lack detail and have mushy faces, but the enemy models, while limited in numbers, look good and menacing. What's more disappointing are the environments, which while sterile by design, lack the beauty and detail of pre-rendered backgrounds.

Of course, this was mainly due to the PS1's lack of power, which wasn't as much of a concern with occasional expertly done CGI scenes. Those were well done and clearly were influenced by Jurassic Park in more ways than one. 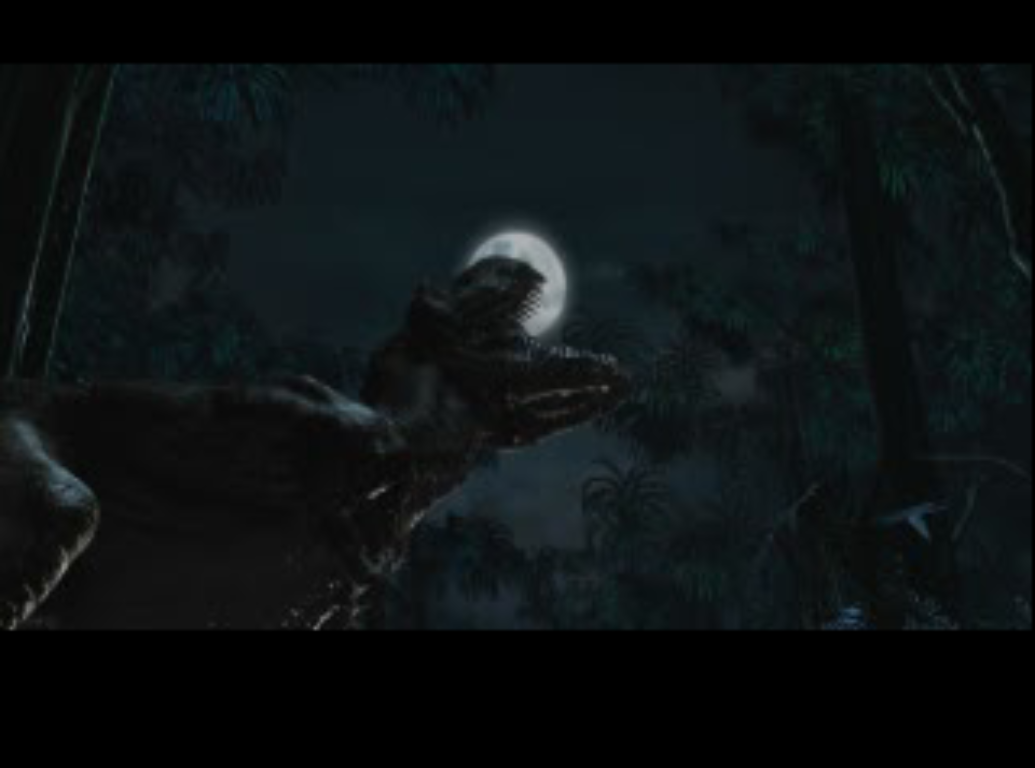 That's not inspired by Jurassic Park at all (sarcasm)

It should be noted that the excellent direction of the CGI scenes extends to the in-game scenes, which made for some memorable encounters with the dinosaurs, especially the mighty T-Rex. Some of those scenes even had an early form of quick-time events, where you need to mash the buttons to escape from a dangerous situation.

As for the game's soundtrack, it's atmospheric most of the time but does have the occasional suitably epic or tense track. It doesn't stick to the memory and doesn't have the same evocative feeling as other games in the genre. The same can be said about the voice acting which is solid, which is better than being memorable for the wrong reasons.

Here is a case where a game is being judged in comparison to its peers and inspiration. I imagine if it was released before Resident Evil, then it would have rightly been celebrated as a revolutionary game. Instead, we are left with a minor mechanical step forward that misses some of the unique pulling factors of the original.

Still, this was Capcom's first attempt at making a Resident Evil clone and they stuck too close to the source material. I wonder what they have done with the sequel of this game. 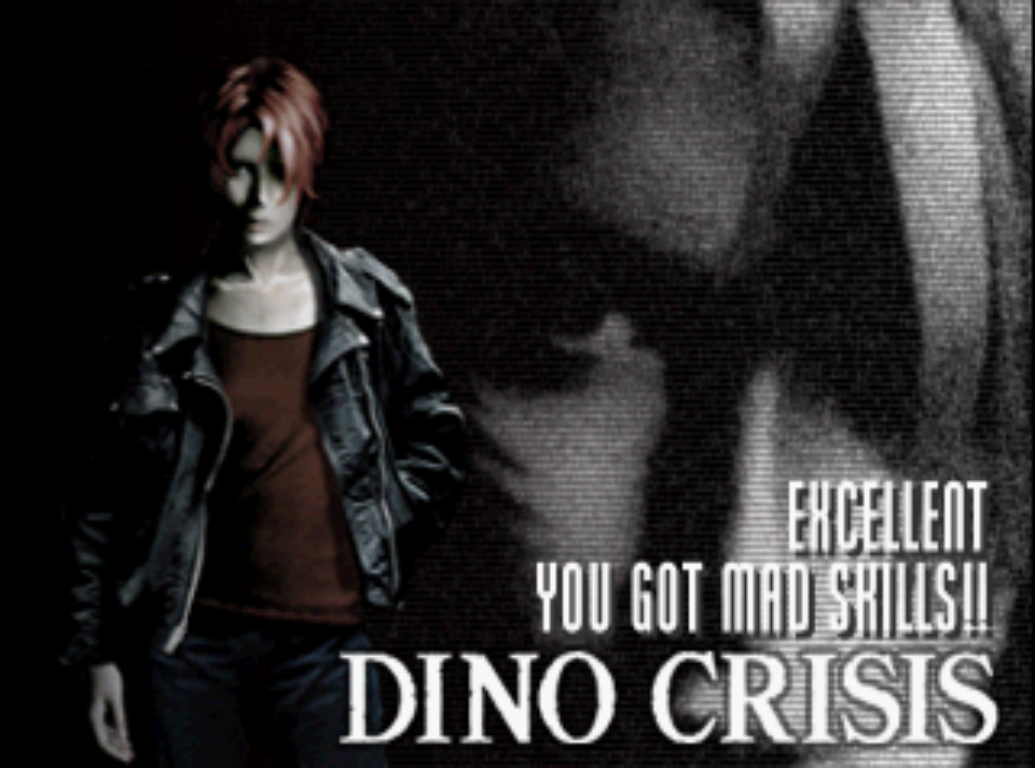 1- Learn to utilize the map and make sense of the directions.
2- You can investigate equipment, signs, books, shelves, and other environmental objects for clues.
3- Avoid shooting dinosaurs and focus on dodging them instead.
4- Save some plugs (that are used to open ammo boxes) for the end-game.
5- You can push shelves and cabinets to expose some stuff.
6- Press R2 for a full 180 degrees turn.
7- Use environmental switches to stop or trip-up chasing dinosaurs.
8- When encountering a "danger" situation, just mash all buttons to escape. 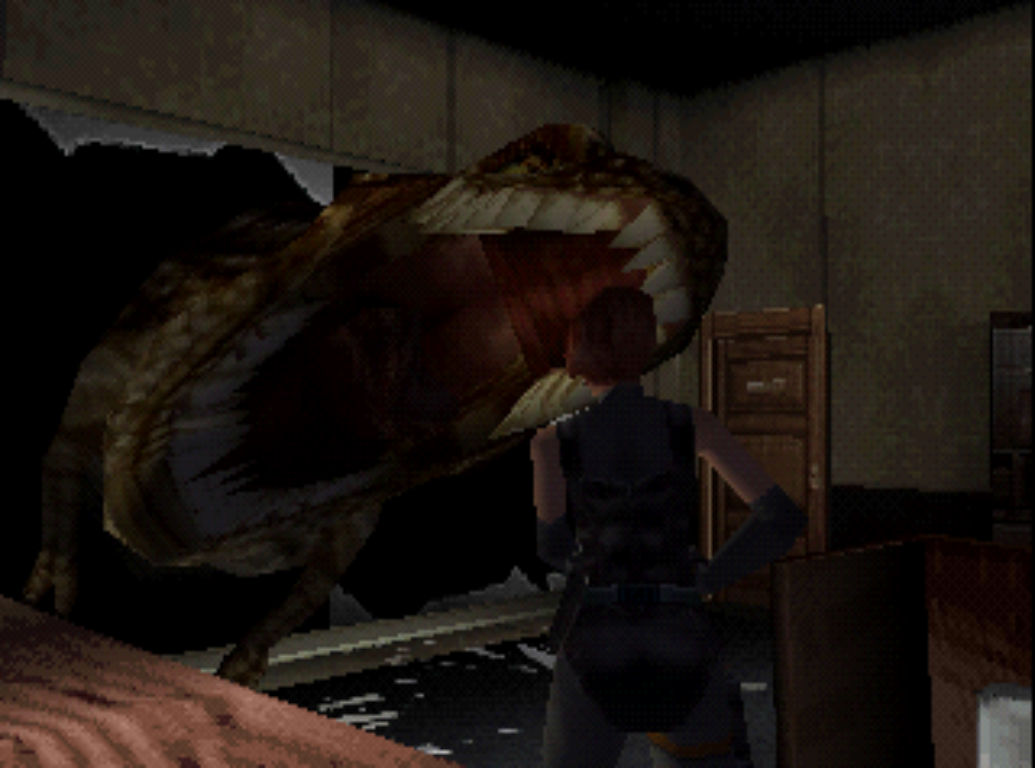 Grandmother dear, what big teeth you have! 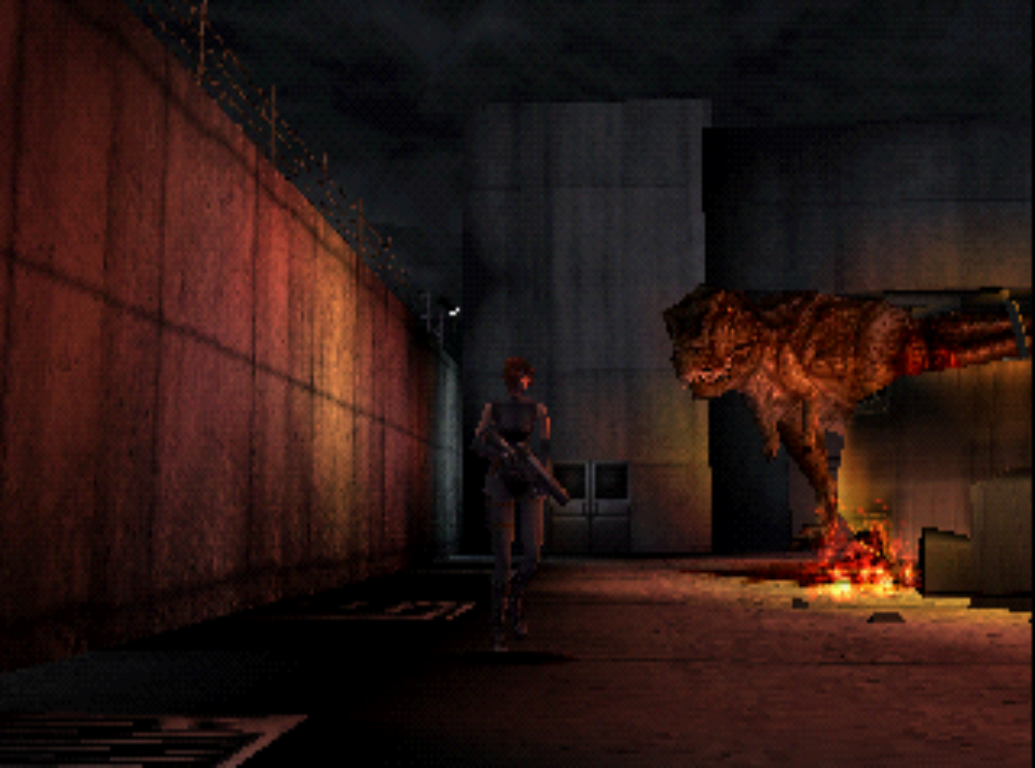 I didn't expect to enjoy a PS1 Survival Horror game at all, so I am pleasantly glad that I did end up liking Dino Crisis.

Now, I am looking forward more to playing its sequel, which is the one that sits at #44 on the Top 100 PS1 games list by Retro Sanctuary. I should note that I have a very interesting personal story with that game which I will share in my review of it.