The Fantastic Finales of Kirby Games

Kirby games are comfort food. They’re simple and engaging... well, engaging to me. I grew up with them and I’m easily swayed by music and art in games, which I’d argue is more than half the battle in this series. Look past that and whatever the new power-ups are in that entry, and it might get a little monotonous.

Let’s put it this way. I have tried playing Kirby multiplayer with other adults twice. Both times, we made it about 20 minutes in, at which point I realized that everyone else was staring at their phones, waiting for me to put in Smash Bros. 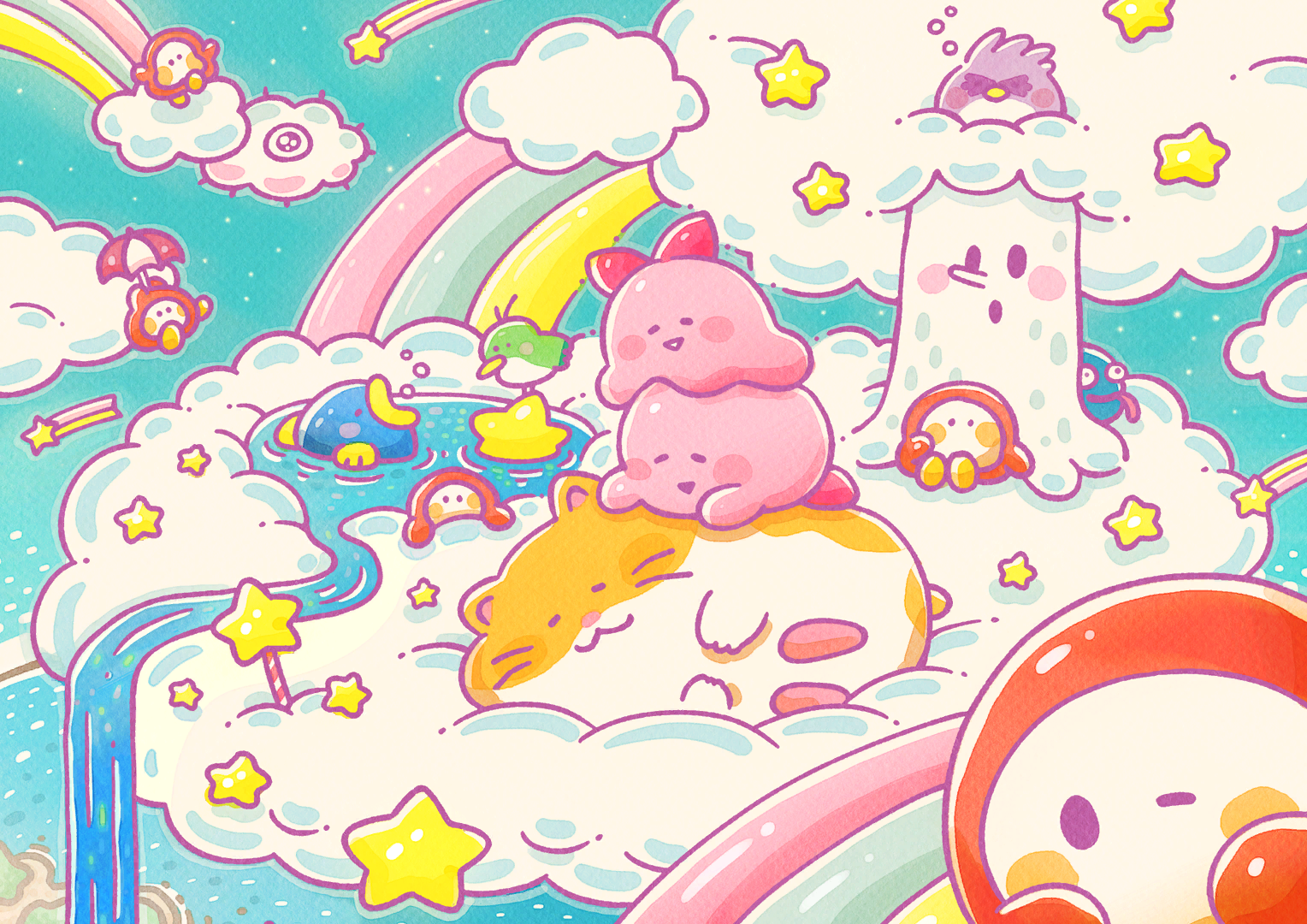 I rarely have an itch to replay entire Kirby games for the same reason. These games are built so the youngest gamers can participate, which is great, but the levels often lack the complexity and skill ceiling of other genre powerhouses as a result. There’s some “platforming.” There’s some button mashing, some slow-paced swimming, maybe a puzzle that requires a specific power up rather than any intuition or thinking. Occasionally there’s a gimmick that is almost always of the “Press X To Win” variety. HAL Laboratory makes it flashy, but not always thrilling.

The occasional monotony is arguably unavoidable given the target audience. This is a franchise that aims to be family-friendly even beyond many of Nintendo's heavy-hitters, and the simplicity ensures it's accessble to more people. But HAL has been really smart about adding elements that make each entry worth playing for longtime fans. Case in point, the final 30% of these games. 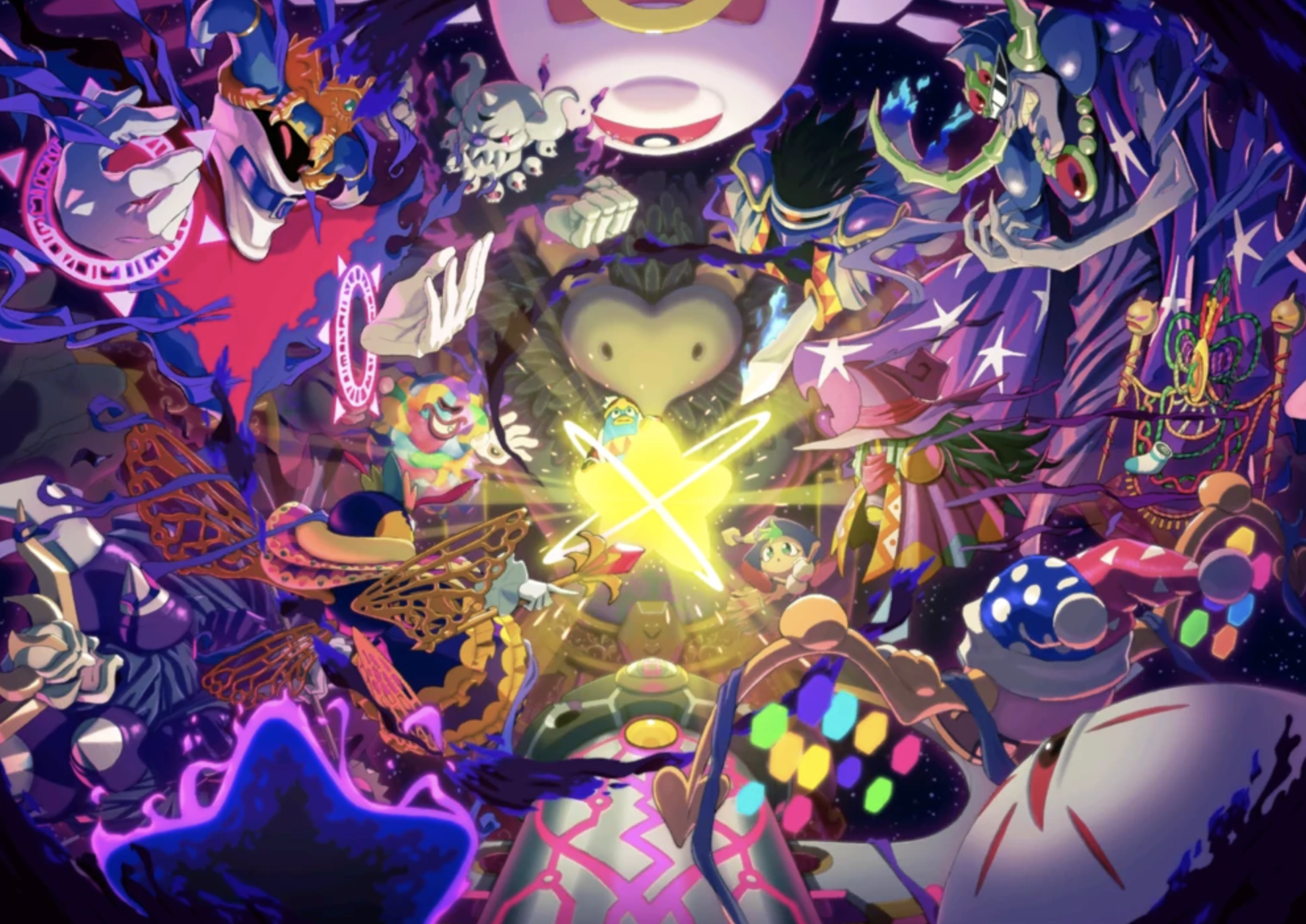 Kirby has some of my favorite finales in not only the wonderful world of 2D platforming, but also the entire Nintendo canon. I’ve always been impressed by how HAL Laboratory can ramp up the stakes despite the cutesy worlds they create, and they've only been getting better and better at it. In honor of the pink puff’s 30th anniversary, here are some of the reasons why I love Kirby’s final worlds, bosses and endings.

I like when each episode or installment of a series has its own unique threat rather than a single big bad that shows up in everything. Recently I learned that there’s a name for this, at least according to TV Tropes: “monster of the week.” Kirby has been following this playbook for the past 30 years, where repeat bad guys are generally the exception and fresh cosmic monstrosities are the norm.

They’ve created a lot of unique beasts, often with just enough of a darker edge to set up a contrast with the otherwise gentle journey. For example, possession is a fairly common occurrence in Kirby’s universe, my favorite instance being the Dedede fight in Dream Land 3 where his stomach turns into a mouth (with teeth!). Or how about the occasional squirts of blood, like the 02 fight in Kirby 64. Or when Super Star's Marx splits himself in half to create a black hole. Yes, it’s still Kirby and yes, it’s tame. But some of these have been enough of a surprise to the ESRB that they’ve bumped certain entries up from E to E10+. 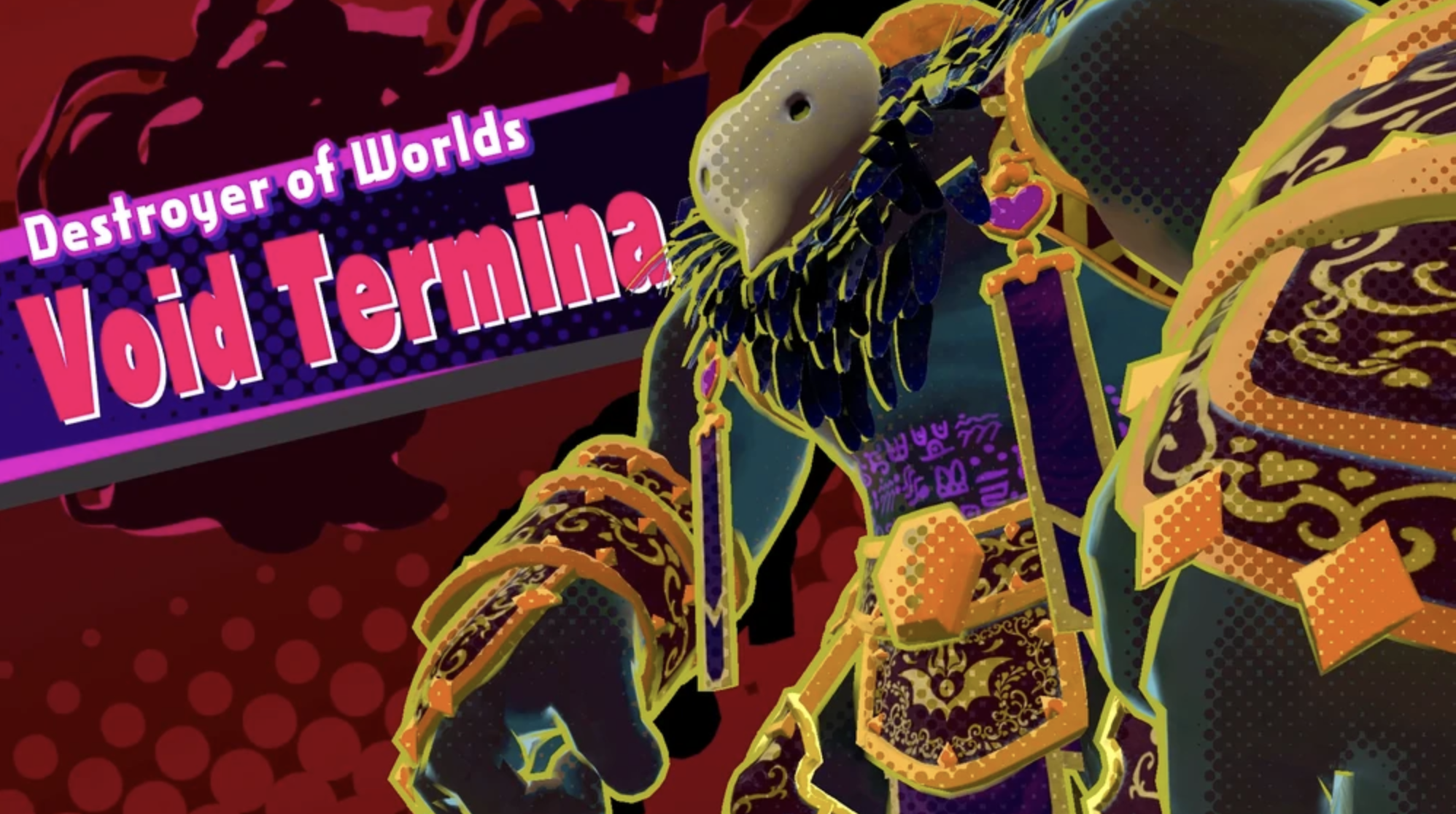 The bosses are also surprisingly dynamic. Most Kirby games end in multi-phase battles, with unique boss designs in each phase as the boss evolves throughout the fight. The standout example is Void Termina in Star Allies, a 5-phase gauntlet with 2 environments and 4 designs, fantastically animated and visually chaotic throughout. Needless to say, the battle takes 10+ minutes. It’s such a blast.

Almost every Kirby story can be summarized in a sentence or two. Kirby goes to retrieve stolen cake, Kirby finds his way out of a cave, etc. This has been the case for 30 years. So imagine my surprise when I visited the Kirby wiki, where half the pages are borderline novellas. Half the target demographic for this franchise can’t even read! 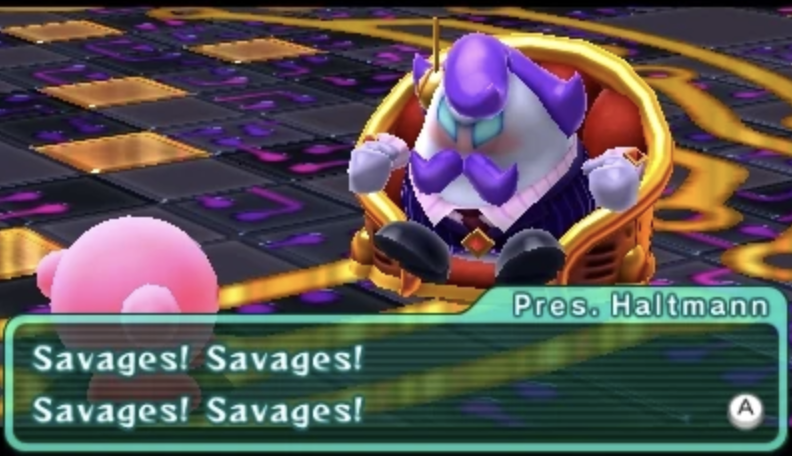 Kirby stories as of late are trojan horses for lore. HAL has come up with a surprising amount of backstory for these characters, which often appears in the games via blurbs in the pause menu, occasional cutscenes and dialogue leading up to a boss battle. It’s just enough to inspire fan theories, not only about Kirby but also the cosmic, power-hungry threats facing Dream Land and the possible connections between them. While anyone and everyone can follow a Kirby story, HAL loves to drop breadcrumbs for the old-timers. 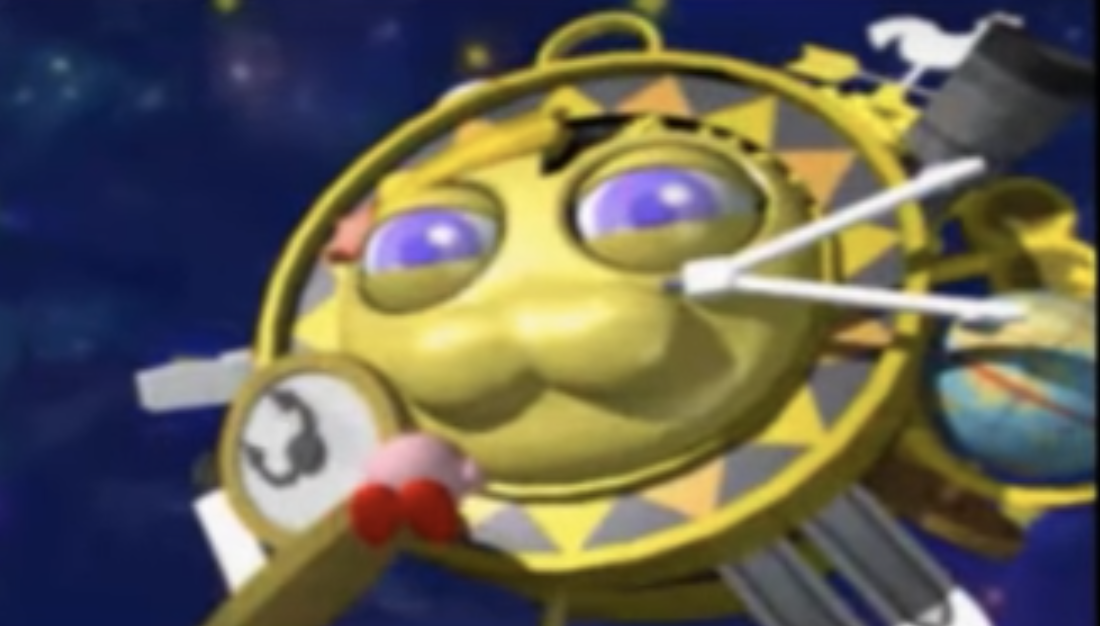 You won’t see Super Star’s golden wish-granting clock Nova again after it blows up, but you might raise an eyebrow when a similar silver clock shows up in Planet Robobot, seemingly manufactured by that game’s villain President Haltmann. Did Haltmann also create Nova? Is the existence of Novas common knowledge in the Kirby universe? How many of these clocks are out there?

Kirby won’t be getting any 4-hour lore deep dives on YouTube anytime soon, but there are a ton of little nuggets like this that reward those who have stuck with the franchise. 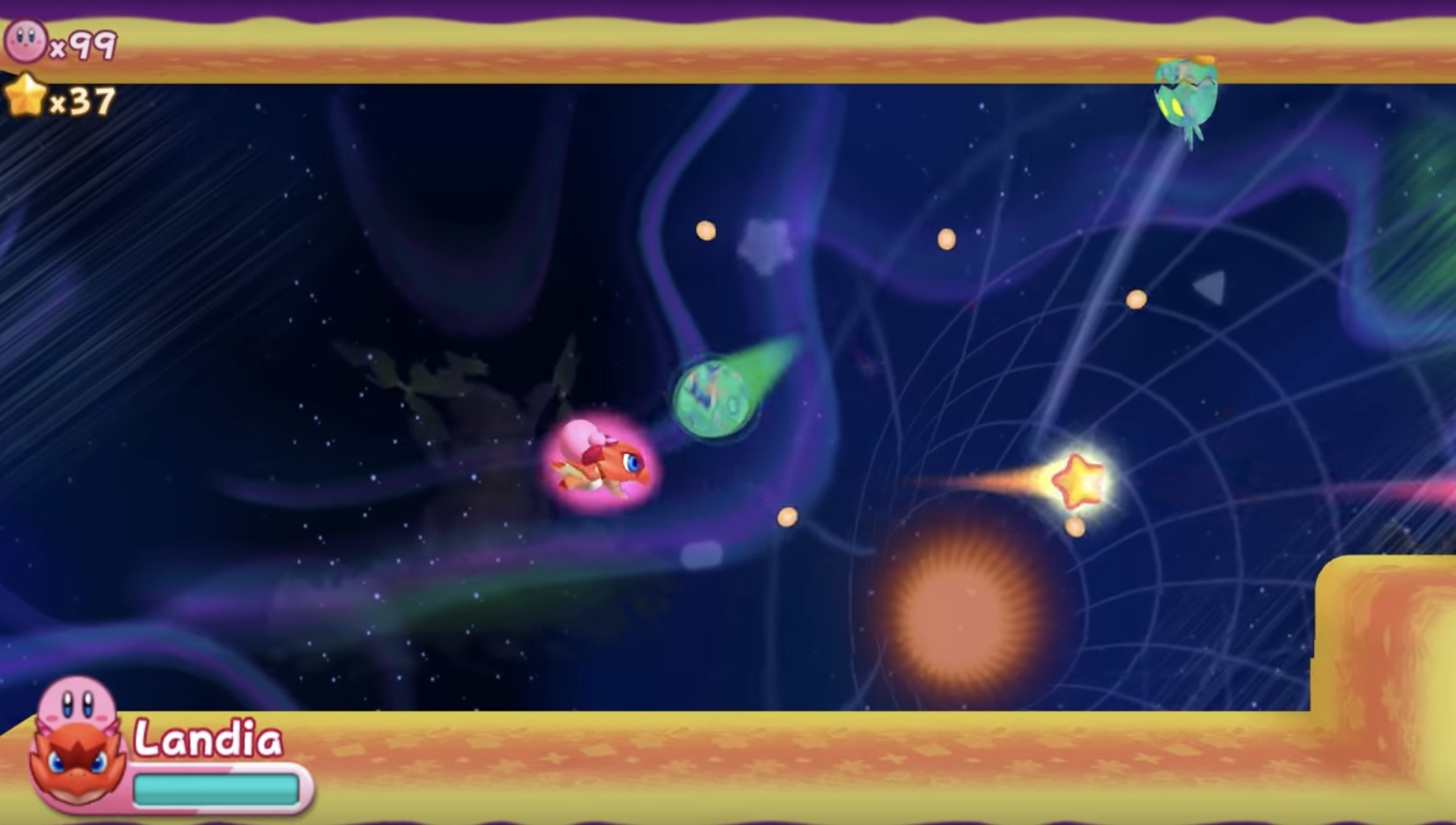 In the buildup to the final boss, HAL usually includes some sort of minigame to shake things up a bit. The most common is the 2D shoot-em-up, dating all the way back to the Game Boy original’s Kabula fight. This is where Kirby heads into space if he wasn’t already there, which helps provide some gravitas. My favorite instance of this is in Return to Dream Land, where Kirby and friends take flight on the backs of (unsurprisingly cute) dragons, chasing Magolor through another dimension. The destruction of Nova in Super Star is a close second.

Recently, the games have amplified these sections with 3D. Planet Robobot’s finale is just straight up Star Fox. And even better, Kirby takes on Void Termina in Star Allies in a legitimate 3D environment – hinting at where the franchise was heading next.

These sections are always memorable, but something I haven’t really appreciated until recently is how they also provide a sense of chaos that help make the endings feel climactic. I talked earlier about HAL’s limited toolbox given the younger audience they aim for, in the sense that they can’t use a difficulty spike to build tension. I love how these minigames serve that purpose, providing a sense that things are going off the rails without abandoning Kirby’s accessibility.

If you know, you know. 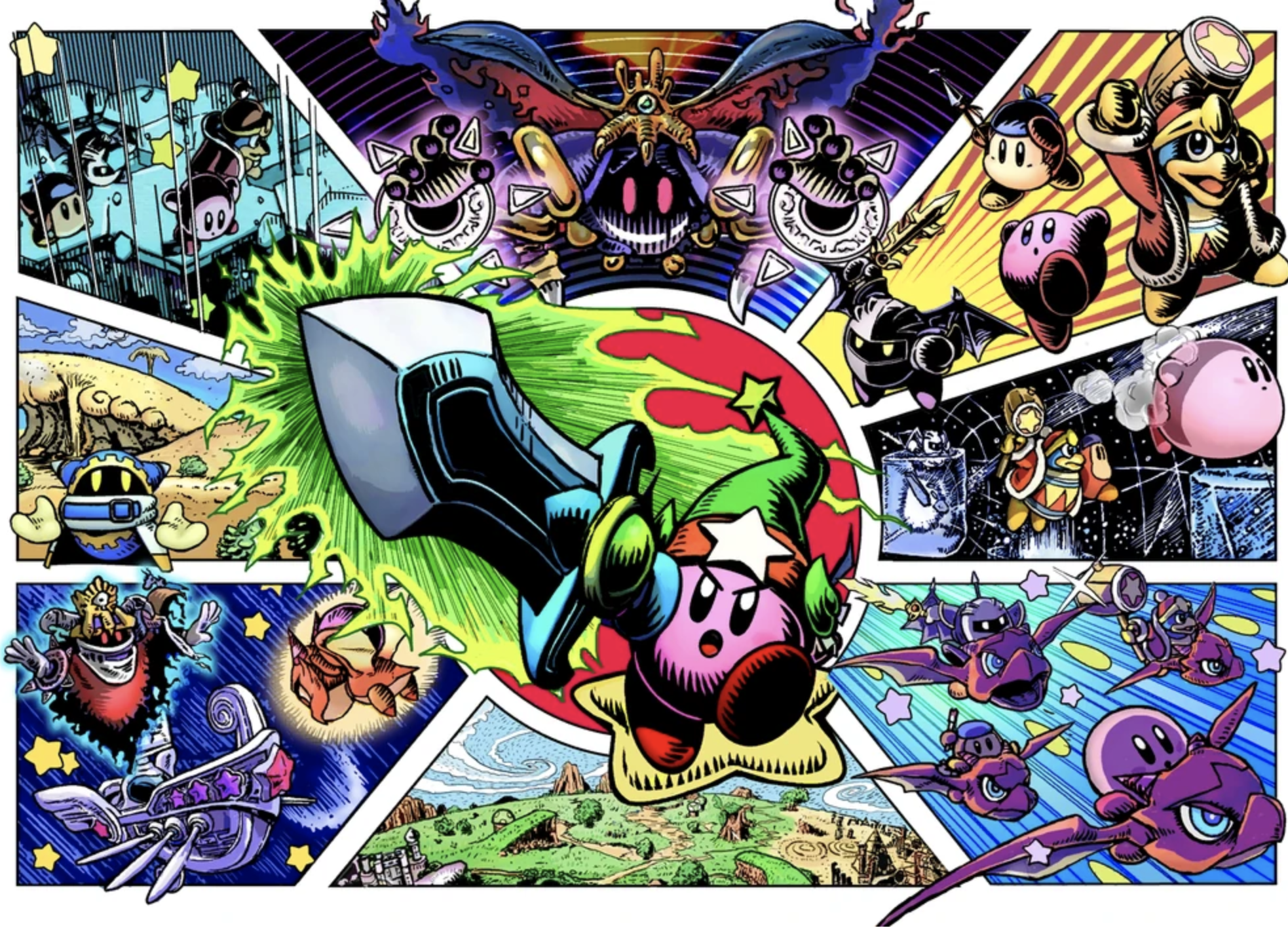 The music in this franchise just kicks into maximum overdrive by the end. I don’t know how they do it, let alone with such consistency. It’s the main games, the big spinoffs, the smaller downloadable stuff, all of it.

Let’s consider Kirby’s Epic Yarn, which should actually have the title Baby’s First Video Game because that’s what it is. At least half of the stages in that game just have gentle piano melodies in the background that can put you to sleep. They all sound pleasant. Then at the end of the game, you fight a sentient poncho in a sombrero holding knitting needles (neither here nor there) in 2 phases. The first has a riff on Kirby 64’s boss music, but even faster and dialed up to 11. The second sounds like a drug overdose. 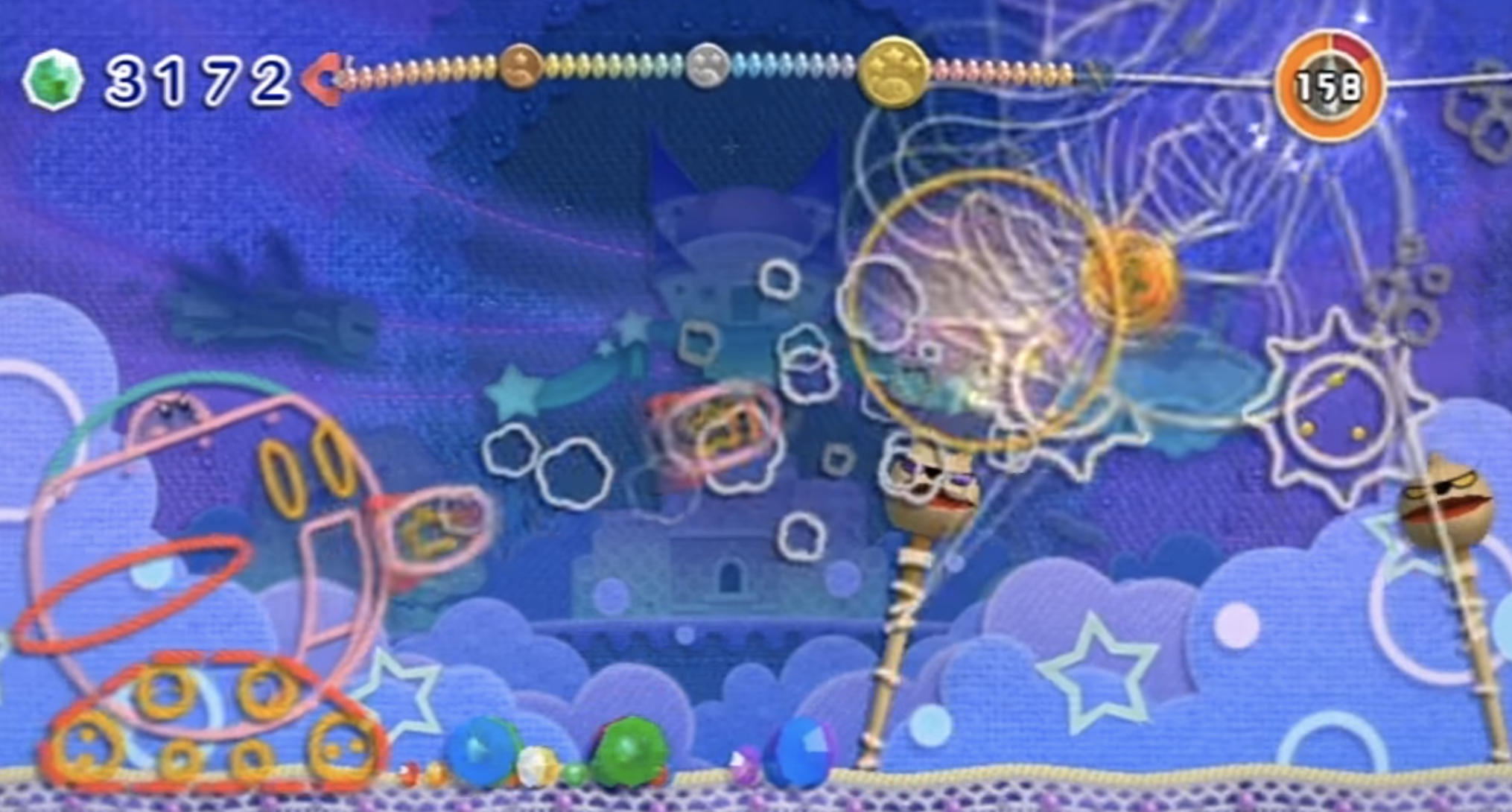 Jun Ishikawa and Hirokazu Ando have been making music for this franchise since the beginning. These games look like virtual rainbows, and they’ve crafted Kirby’s signature peppy sound to fit that. So when you do hit the tracks that are darker, sharper, grander… you feel that contrast. I can point to multiple cutscenes and bosses with music that gave me chills on my first listen. I wish I had a better grasp on why, and unfortunately, I can’t really describe what I love about it effectively. The motifs and harmonies culminate in moments that somehow balance that distinctive Kirby feel with an impending doom, like the sun is about to explode. I’m sure actual musicians could take a better stab at this, but I’m just going to cheat and say that there’s some indescribable musical wizardry here. 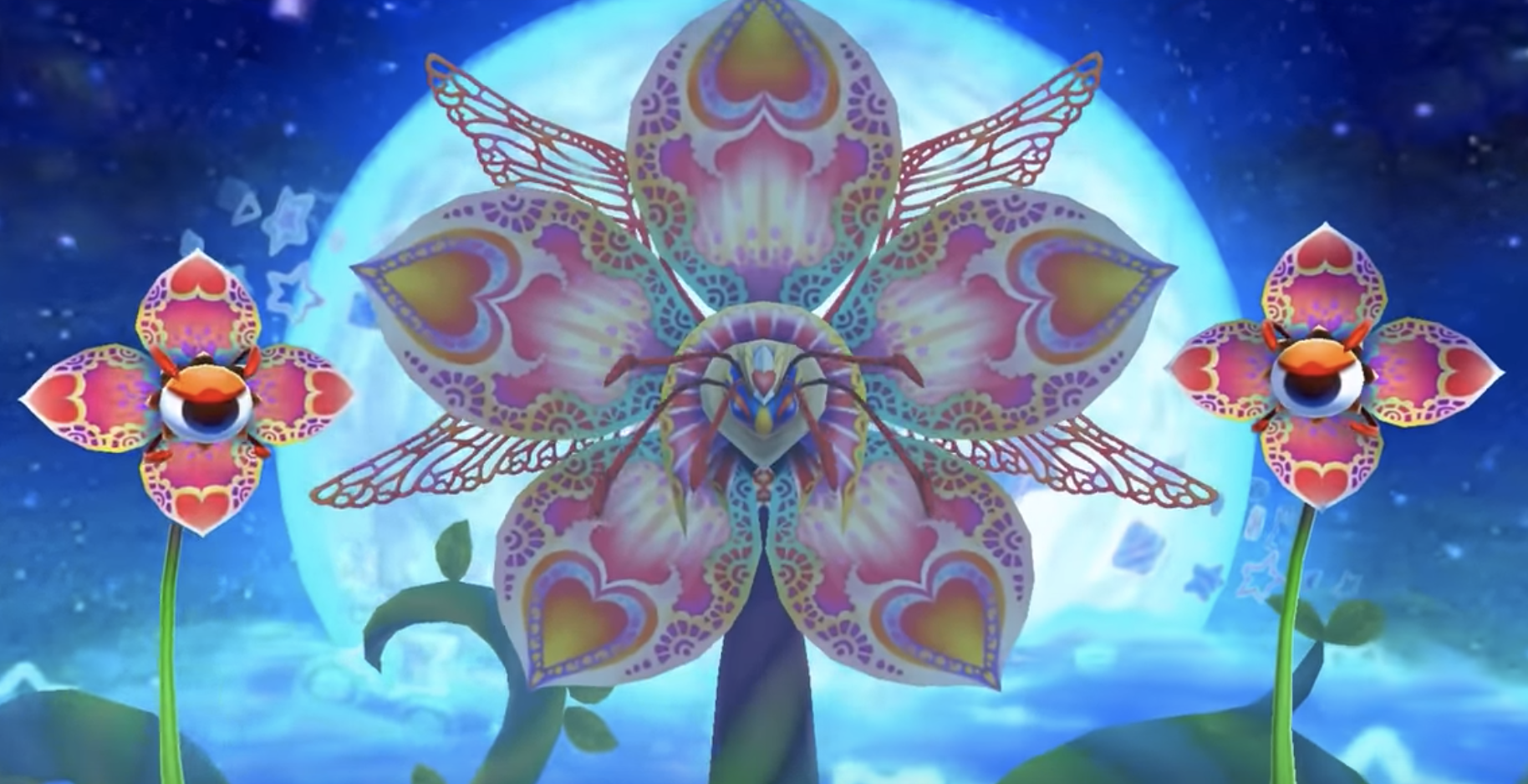 Earlier I mentioned that I generally don't replay entire Kirby games, but I always enjoy return trips through individual stages that really clicked for me. Ergo, I have replayed the final battles of Kirby Triple Deluxe at least 15 times. That is because of Moonstruck Blossom: the haunting, empowering melody that stunned me the first time I heard it. You can breeze through the entire game in a few hours and yet the final boss sounds like the climax of a 200-hour RPG. It is so ridiculously good.

The song ends when you eventually deplete the flower’s health bar... but wait a minute, that’s not even the end because then Dedede flies in out of nowhere and gives you the power-up that lets you suck up bigger objects, so then you start sucking up the flower eyeballs that attacked you in the last phase and the giant petals of the flower and the health bars from the UI, and then you disintegrate what’s left by spitting all of this back out in a concentrated hurricane. 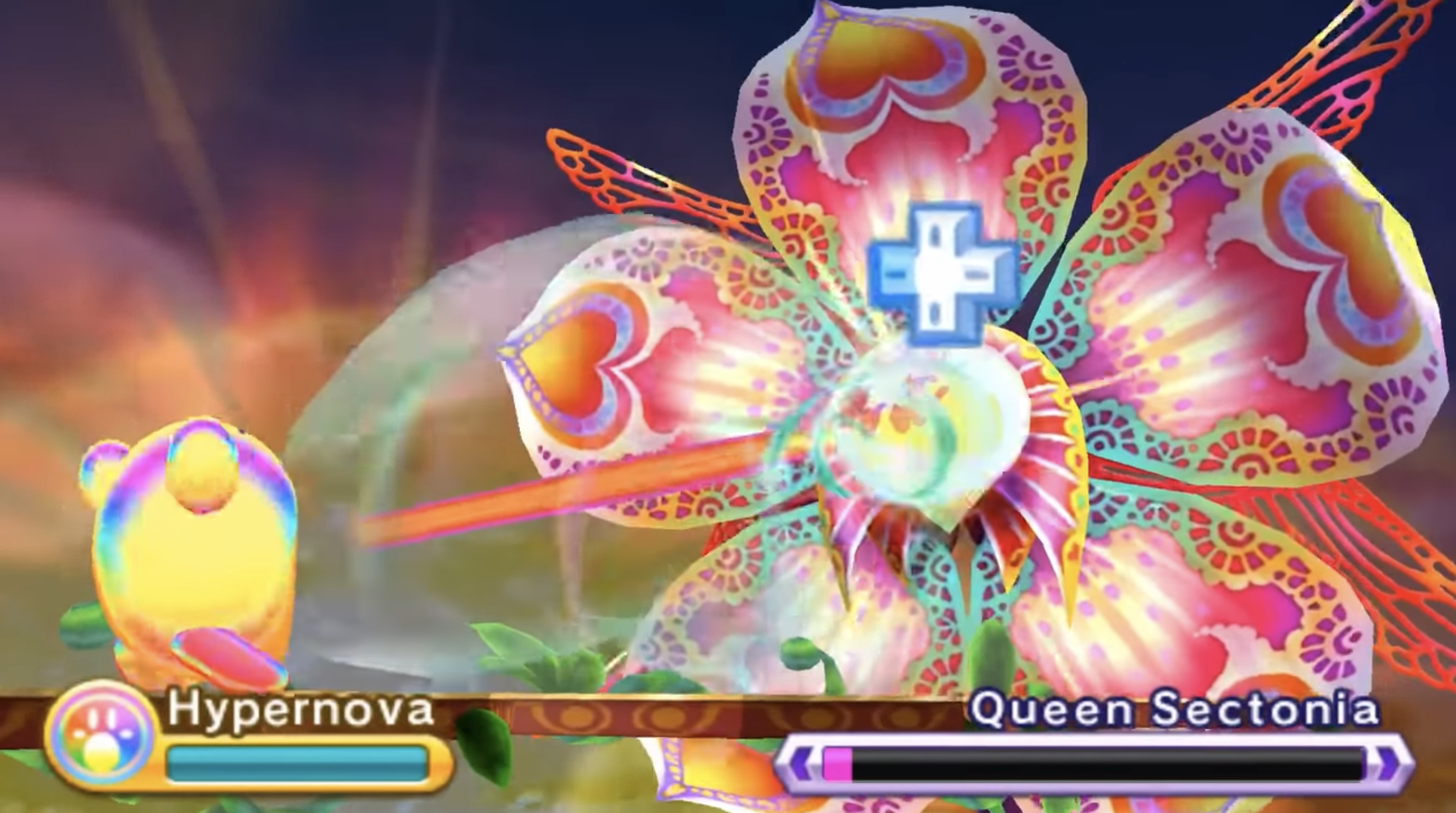 It’s madness. And it was a choice. The ending could’ve just been a single fight with Dedede, followed by the credits. But instead of that, HAL gives us a possessed Dedede swinging an ax around, then a fight against a big bumblebee with swords, then the moonstruck blossom with the incredible song, and then this ridiculous power fantasy to cap it all off.

This is a world where a sentient marshmallow hugs his friends to refill their health. The escalation and intensity here are completely at odds with that, and the game is better because of it. Nobody can pull off an encore quite like the pink puff.