Of the many mascot characters that Sony attempted to craft for their PlayStation brand, none wore that particular role with less grace than Sir Daniel Fortesque of the MediEvil series. That's not to say that his games were bad, but that a suit of armor with a one-eyed skull for a face is not something that usually sells a brand.

However, the competent 3D Action gameplay of the first game did showcase the console's capabilities, and the first game had enough charm and personality to commission a second game to advance the formula. While it's undoubtedly true that the sequel does fix many of the issues of the first game, the result is still a game with awkward pace, terrible combat, and little to recommend it other than its unique zombie charm. 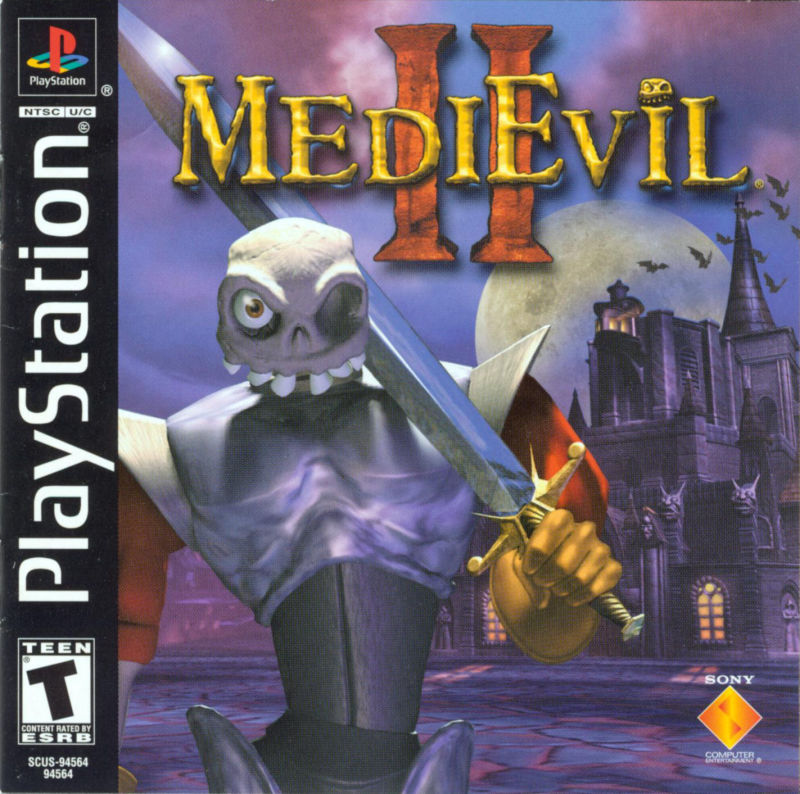 "Sir Daniel Fortesque, back from the dead once again. The great hero of Gallowmere reduced to a dusty relic at the back of the old museum"

The game starts with a magical event that animates the dead of Victorian London, which fortuitously includes Sir Daniel, the hero who should uncover the secrets of this black magic event and put things to right. In that quest, Sir Dan meets a friendly ghost friend who moonlights as a tutorial, a professor-type with typical English traits, and the reanimated corpse of an Egyptian mummy which is inexplicably blue and sexy.

At this stage in gaming, most games in most genres required a semblance of a story to accompany the action, and MediEvil II neither bucks that trend nor improves on it in any way. This is a competent story with solid voice acting that is augmented by the game's zombie-inspired humor. 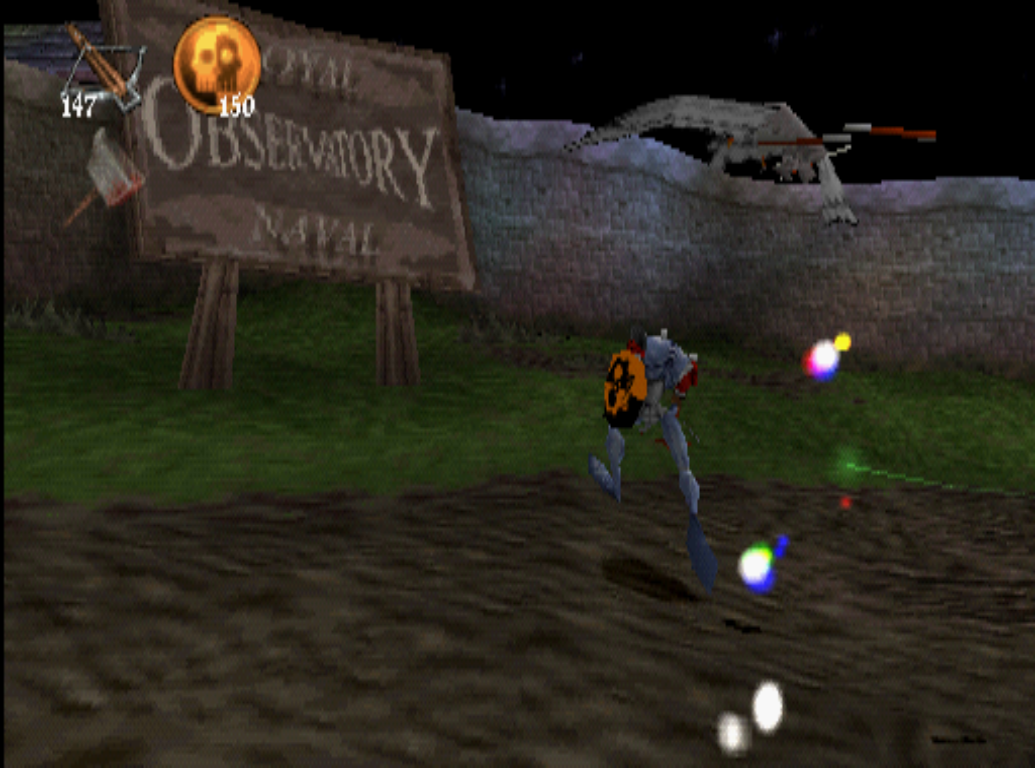 One thing to note is that the decision to use Victorian England as a setting should be brilliant, but the locations are boring and non-descript that it rarely features at all. If not for the English VA and the occasional cockney accent, this could be 19th century New York.

In a way, the style of this game isn't much different from the mid 90's style of cartoons with a focus on gross-out humor and some weird visual styles. Shows like Dexter and Courage the Cowardly Dog, which I feel were of the same cultural zeitgeist as games like Earthworm Joe and Skullmonkeys.

"Every dead soul in London is walking the streets, and a host of demons have arrived to plague us"

After Sir Dan wakes up from his long rest in the museum's crypt, he immediately springs to action with nothing but his own arm as a weapon. Not to worry, he soon finds a sword and pistol to use against the evil army of the dead (excluding himself and his allies).

The main gameplay element is its hack-and-slash combat, which is interspersed with the occasional puzzle or platforming section. All of these elements are basic, tedious, and just plain un-fun.

Combat is a messy affair regardless of whether you use your melee or ranged weapon, and that's basically due to the enemies' inability to flinch and a significant lack of invisibility frames. Instead, they will keep hacking at you, with your only means of defense being a consumable shield. Soon, you will realize the best way to survive is to frantically run around while blandly hitting the attack button or use the charged area-of-effect moves that are available with weapons you acquire later. 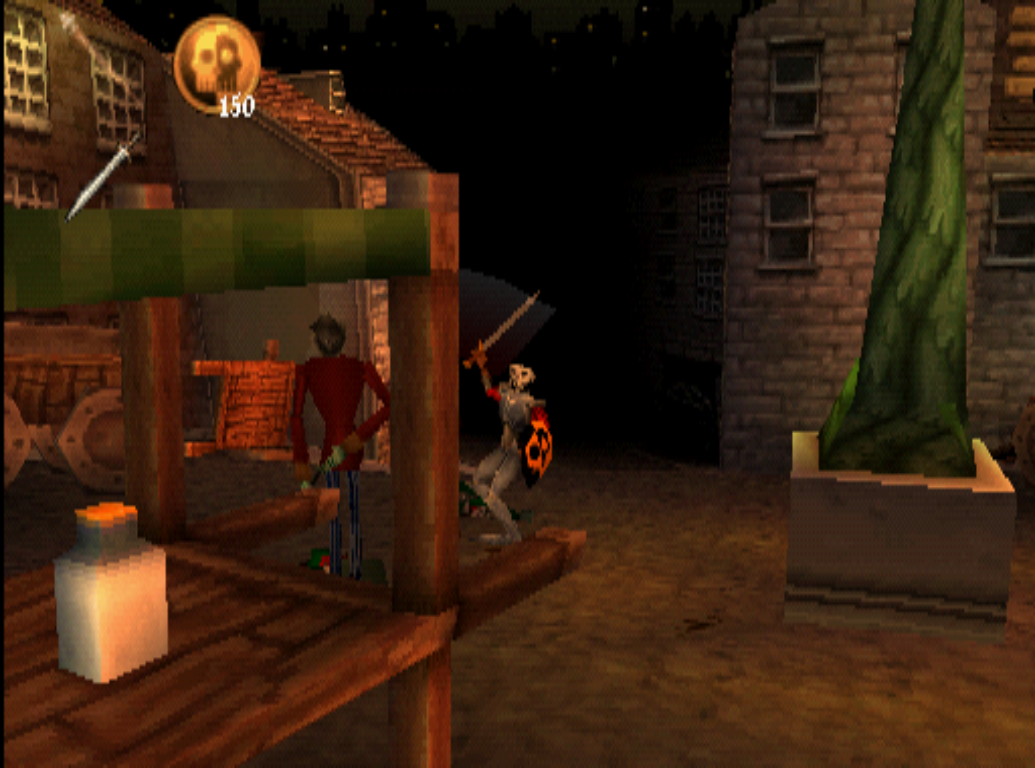 Offense, due to your skeletal frame, is really the best defense

Speaking of acquiring weapons, that's something you can do by collecting chalices in every level, which you do by killing enough enemies to fill the chalice and then look for it somewhere on the stage.

Other than some slight visual variations, these stages are uniformly boring and are only distinguished by how bad their platforming or puzzle sections are. Admittedly, one great idea in the game is the smart use of Sir Dan's skull. You can detach it after a certain point in the game and use it for reconnaissance to help solve some puzzles.

Thankfully, that level of intelligent design carried over to the game's bosses, but they do grow a bit tedious due to their overlarge health. Which, along with the slightly erratic camera is the main constant in MediEvil II's gameplay.

"Try the hammer of Thor. You are sure to have a smashing time"

Like with its basic but unique world and character design, the production of this game can only be described s quite competent. The 3D graphics are acceptable, and the art direction is consistent throughout, with clear and fluid animations that are exaggerated both for effect and to conserve in technical work.

I just find it hard to see the potential in Sir Daniel Fortesque's world, and other than the novelty of controlling an undead character with many uses of his own skull, I am not sure this is a series that had any legs to go beyond the initial joke. 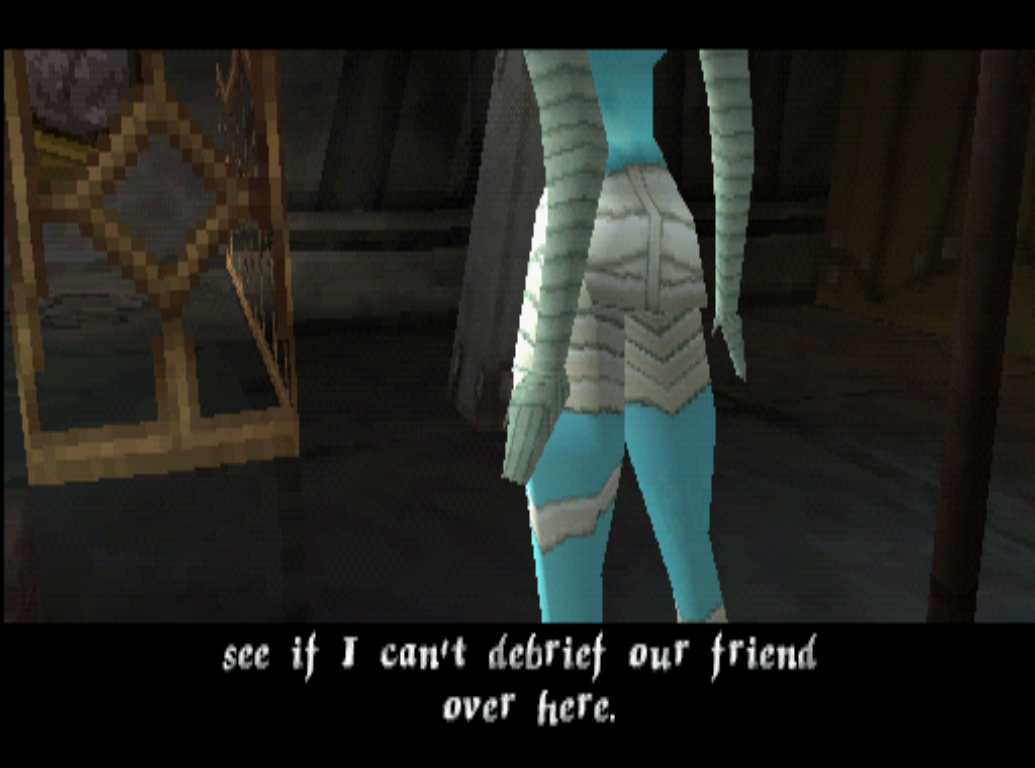 Anyways, that didn't affect the graphics department, which did their level best at the technical aspect of designing the game's world and characters, who unfortunately grow stale and indistinguishable as the game goes on despite always being competently made.

The same level of sameness and competency can be said about the game's soundtrack, which runs the gamut from spooky fun Holloween themes to medieval-inspired heroic tunes with a twinkle of fun. It's all competent, but extremely expected, and frankly nondescript.

A lot of people liked, and still like MediEvil and its sequel. They might be seeing something in the game that I am not seeing because all I can see is a mediocre Action-Adventure game with an interesting but poorly realized world and characters.

Then again, the poor reception of the first game's remake may just suggest that this is just people's nostalgia speaking, and not the game's hidden quality. 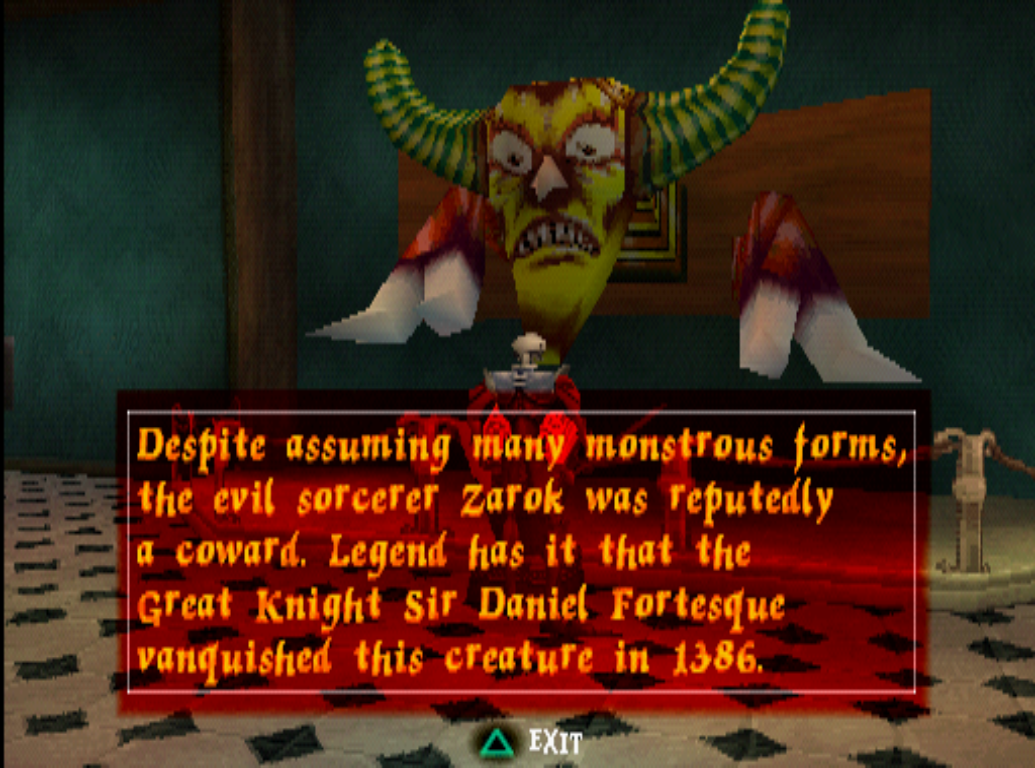 1-Double tap the directional button to dash.
2-Press triangle during a dash for a daring dash.
3-Kill enough enemies in each level to unlock the chalice, which will give you more weapons to use if you find them.
4-Back up often to health fountain to heal
5-Note that health fountains can deplete
6-Best mode of fighting is flailing like an idiot while hitting your enemies with an AOE shockwave attack 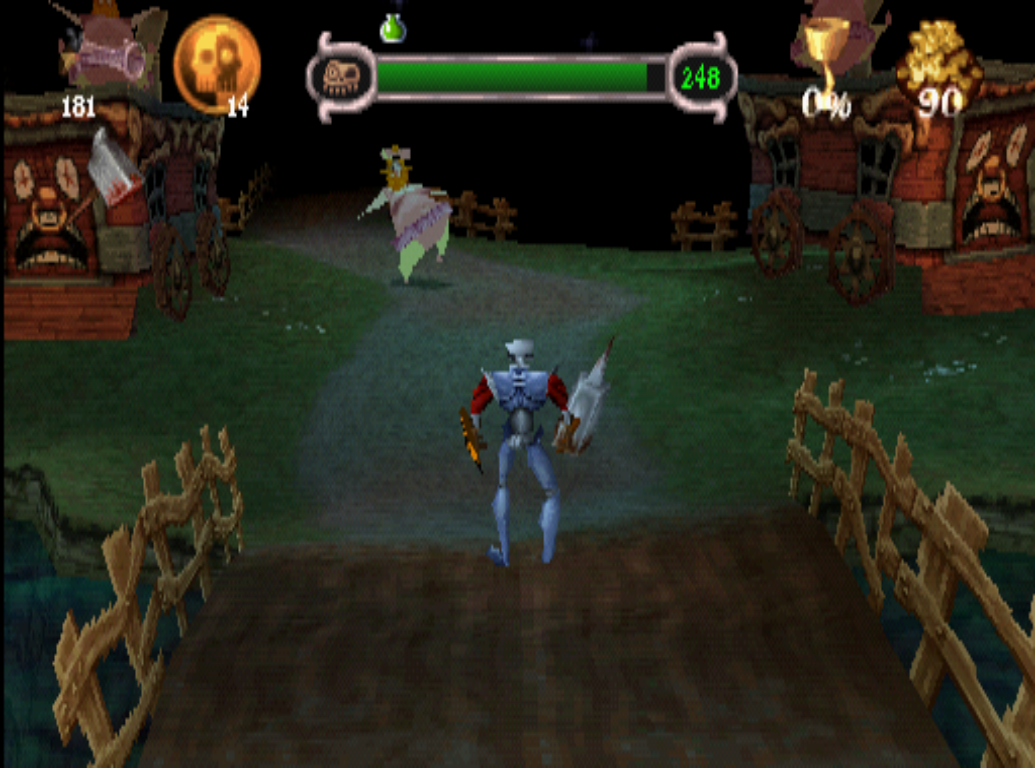 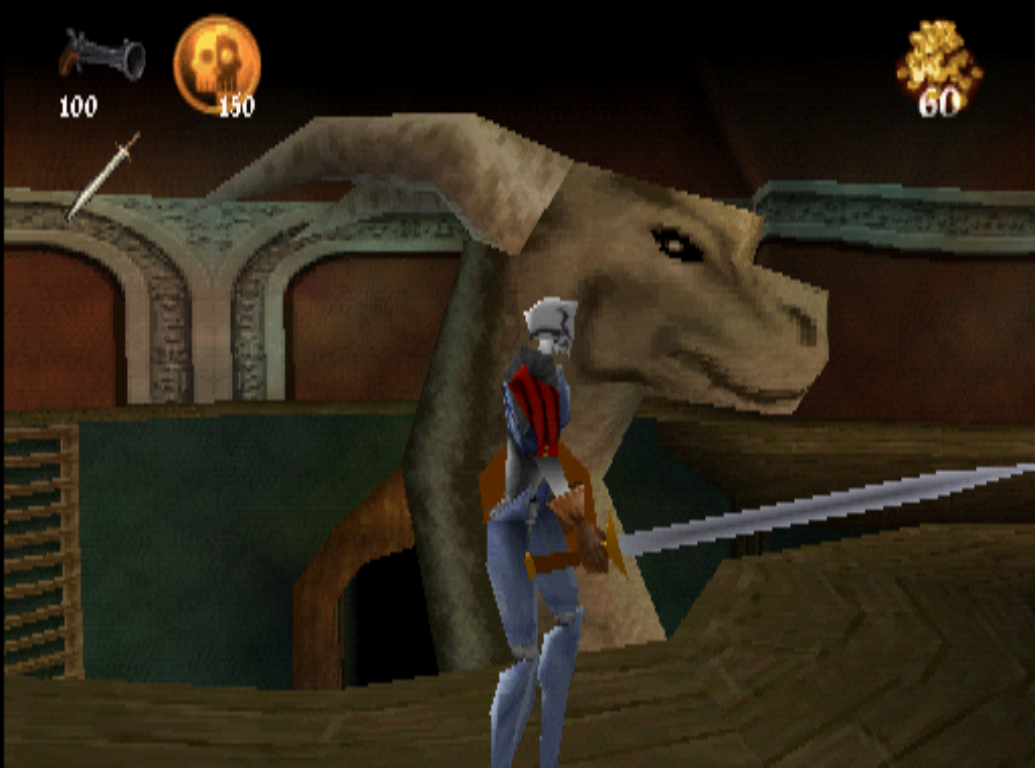 I remember not having a very great time with MediEvil or its sequel as a kid, and I thought it was due to its difficulty. Now I know that it is just not a very good game.

After playing two mediocre games in a row, I am afraid of striking with a third, and Shadow Madness as the next game in the unranked addendum list is a sketchy case. It's a JRPG made by a Western studio without much pedigree, but one that did make a couple of interesting and well-loved games. Here is hoping for a good time.