Some years ago, I saw on Eurogamer an article that mentioned a futuristic follow-up to an earlier golf course management game. This year, I recalled that and wondered what became of it. To my surprise, it exited Early Access a year ago and has been available on Steam: GolfTopia, from MinMax Games.

I hadn't seen any buzz for it here, and it appeared to have slipped past most big sites -- as in, it has two listed Metacritic reviews and no user reviews as I'm writing this. 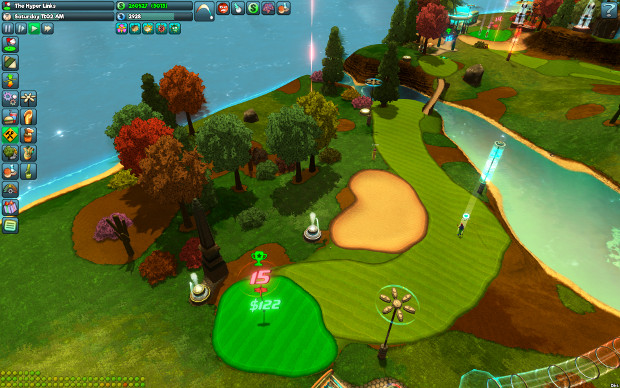 Somehow, the guy on the fairway managed to sink the ball from that distance, and in the process earn the club $122.

Golftopia is a sandbox tycoon game. No campaign, just a randomly generated map (that you can edit pretty much to your heart's content) and the vague purpose of setting up a successful golf resort.

The game starts with the player choosing one of nine island segments to start with, placing a clubhouse and designing the first holes. Place the tee box, the hole and draw fairways, the rough, sandbunkers etc to make it a golf hole. Open the course for business and there'll be golfers liking and disliking the holes, and the better their mood, the more money you get.

Creating the course is easy; the size of the circular brushes for painting different turfs and with simple toggles, the player can also specify which turfs will be painted over and which one will not. Then you can look into adjusting the ground elevation and do away with the terrain constraints of the original map.

Tool options on the right. Drawing courses is easy enough. While we're at it, bottom left shows the moods of all golfers on the course now.

The progression in the game is done by purchasing more parts of the island and upgrading the clubhouse. Each upgrade will allow for more holes and some extra special buildings like putting greens and automated orbital lasers. The golfers will also grow more demanding, which will pull the difficulty gradually up.

Like in the referred management game from 2002, there are weeds that will disgust the golfers if they see them.

And that's about it, except it is not.

There's a definite futuristic slant to the game: the weeds aren't dandelions but strangely glowing bushes that are removed by drones, lasers, flamers and mortars. The game "spruces" up golf with wacky gadgets like rings of fire, bumpers, massive fans and ball teleporters, and when the night sets on the course, the neon lights start popping out even bordering different turfs. Tubes can move golfers and drones from one part of the map to another quickly, and then you can use a gradually regenerating energy to use some orbital laser thingy for locally killing weeds, repairing and resupplying facitilies, making people happier and such. 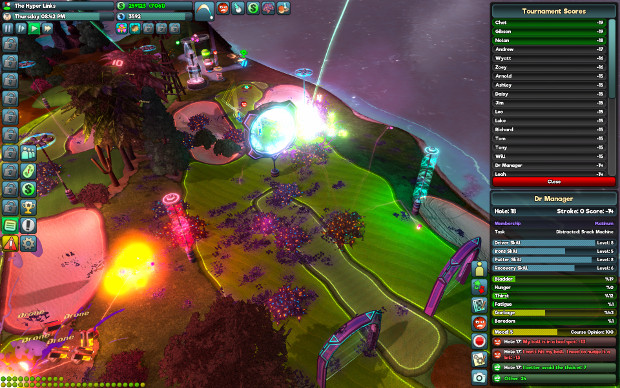 A weed hive appeared during a tournament, and drones with their lasers at the bottom left, and lawn-mortar hitting a bush at the top aren't doing well enough to clean the course before golfers freak out and cancel memberships in the golf club.

Animations, though, aren't that great. While the camera can zoom in close, the 3D models are not very detailed and the walking animations, for instance, are clumsy even in my eyes. 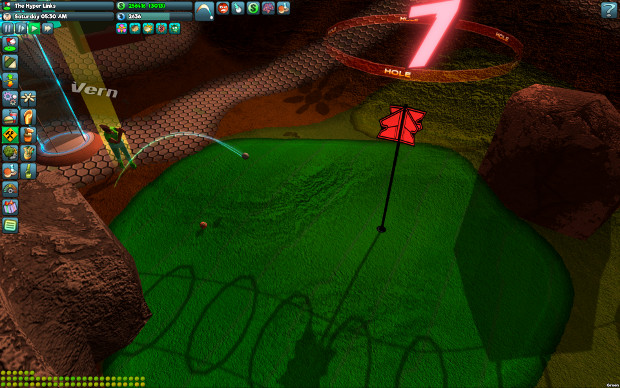 Glowing balls leave glowing trails, and the lights recharge the balls in the night time. This is not night time.

While you can design courses without the fire rings, boostpads and such, these will mostly have a positive effect on the golfers' mood. Doing a "traditional" golf course will, as such, mean handicapping yourself somewhat.

The UI works mostly fine, but I did spot something I didn't like when I played the course myself.

Yes, like in that twenty-year-old golf course management game, you can play on your own course, which was one of the main draws for me here. My problem is that the type of shot is chosen with a slider, and the club from a list of four options. I'd rather expect the club to be chosen in a slider than the type of shot -- putting, draw, fade, low, medium, and high.

But beyond that, the game offer the player good information on the golfers' moods, what is their problem and how good the holes are.

Most of the time, I'm indifferent towards multiplayer modes, but in this case, the complete lack of any multiplayer modes feels like a minus. Not on the tycoon side, though, but on playing the courses. It would've been nice to try a small tournament on self-made courses even via Steam Remote Play, but no.

It took me 14-16 hours to make my first five-star golf club on the default settings, and a lot of this time was watching golfers play the course and finetuning the courses to make them more likeable.

There are plenty of options to change for harder or easier game. But... do I want that? There are no different "biome" constraints to work with, so the visual toolkit doesn't really change.

A lot of the appeal is in having ideas for more or less wacky golf holes that the player would then implement in this game. The fuel is the player's creativity, and that comes in highly variable amounts. That... isn't really something I am good with.

Overall, I'm happy that I played it. Maybe it's not above the 7.5-ish the two other reviews gave it, but I take it.