The Fall of the Amico and the Potential of Evercade 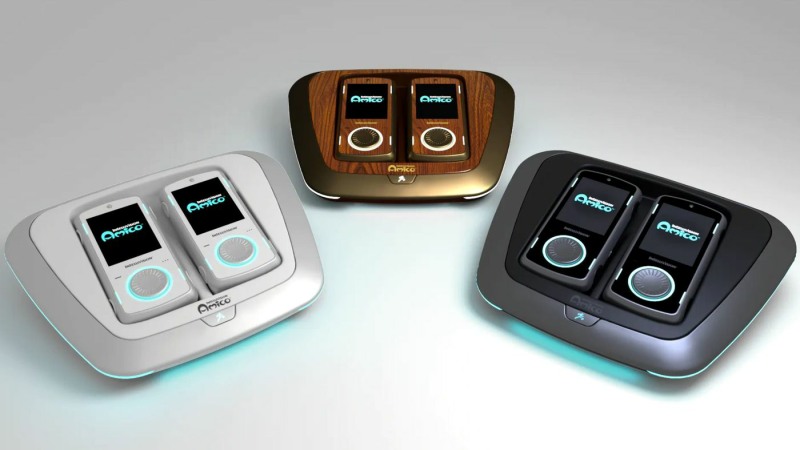 Thanks in no small part to the widely publicized antics of company front-man Tommy Tallarico and a host of questionable money-raising stunts by Intellivision, the world at large has been seemingly all too thrilled to watch the slow and torturous unraveling of the Amico console.

The saga thus, for those who care, is well documented throughout the web, so I will not spend much of my column space reiterating the multiple hardware delays, the cringy tactics of selling people empty boxes to serve as the (vague) promise of forthcoming games, and the recent CEO swap-a-roo that, to the eyes of many, represents the final nail in the coffin for the system’s ever seeing the light of day. 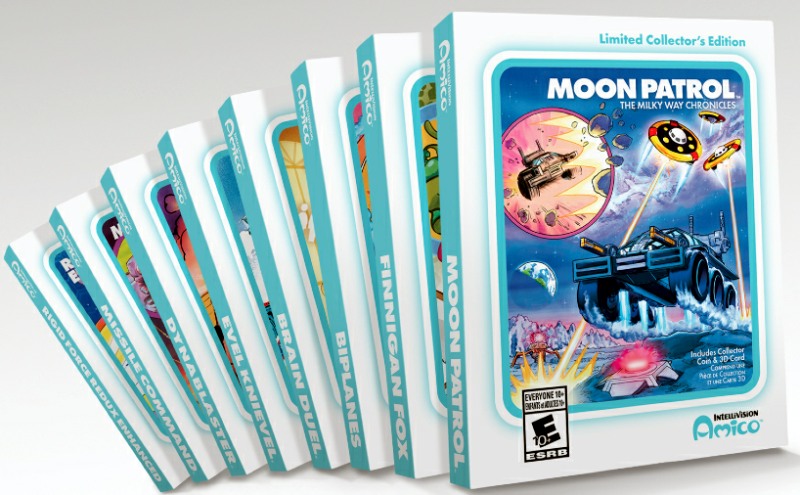 The finger of blame for what is turning into quite a disaster can be divvied up to point in several directions, and, while it seems most rewarding to blame Tallarico entirely, the truth of the matter (according to SEC filings) is the company, despite several successful crowdfunding campaigns, has been chasing zero from the onset.

In fact, according to the latest intel, not only has Intellivision reported having made no revenue since its resurrection in 2018, but it may also not be able to operate beyond July of this year. Not only has it apparently been unable to turn a profit, but it also seems they’ve managed to chock up a chunk of debt to the tune of $3.1-million in outstanding loans in that same period of time.

This is, of course, very bad news to anyone who put up cash to fund the project. Whether or not they would be entitled to any sort of recompense should the whole company fold this summer is yet to be determined.

Additionally baffling is what happens to consumers who preordered the Amico hardware from reputable gaming dealer franchises like Gamestop or through Intellivision’s official site.

Aside from the obvious investor financial turmoil, the fact that the hardware is degenerating toward the realm of vaporware in a hurry is a loss for the entire industry. Why? Well, mostly because it was attempting something that seems so logical on paper: To offer a piece of modern technology designed to replicate the gaming experience of yesteryear.

So what, you say? There are dozens of ways to do that on the market already? You wouldn’t be wrong. Anyone with a Nintendo Switch or a Steam account can tell you about retro game titles (both old and original alike) at the modern gamer’s disposal. Yet even still, we know the market for modern (HDMI-ready) equipment designed to play retro video games is red-hot. One need look no further than at the ongoing list of “retro mini” consoles released in recent years for confirmation.

Why is this, you ask, given that most any modern system is both capable of playing and typically has libraries of retro games collections available? Well, I can think of a few reasons. First of all, it’s self-contained. There’s something very different about plugging in a Super NES Classic Edition and gathering around the big screen when compared to the process of docking a Switch, syncing up multiple controllers, going through your personal game library, hoping nobody erases any of your save files.

Next is the appeal of the original hardware coupled to modern amenities. For many of us purists, playing on the original hardware represents much of the experience. The trouble is the original equipment is often quite old now and mostly incompatible with modern displays. Modern systems account for the advances in technology with HDMI output and aspect ratios not only designed to fill the much-larger screens of today but to also reduce input lag that is present with composite/ RGB connections outside of a CRT.

The Amico, of course, functions a bit differently than the retro minis in that while it owes its namesake and some design cues to the classic Mattel Intellivision, it is a fully modern piece of hardware. Sure, it had a host of Intellivision classic collections (as well as modern reimaginings) announced, the reality is that its specs (8 core, 1.8Ghz Qualcomm Snapdragon processor with 2GB RAM, 32GB Flash) and its ability to run external software mean it’s just a modern piece of console hardware like any other.

The real restrictions placed upon it were those enacted by Intellivision Entertainment themselves – things like an MSRP under $19.99, E for Everyone ratings and inclusion of couch co-op multiplayer modes. 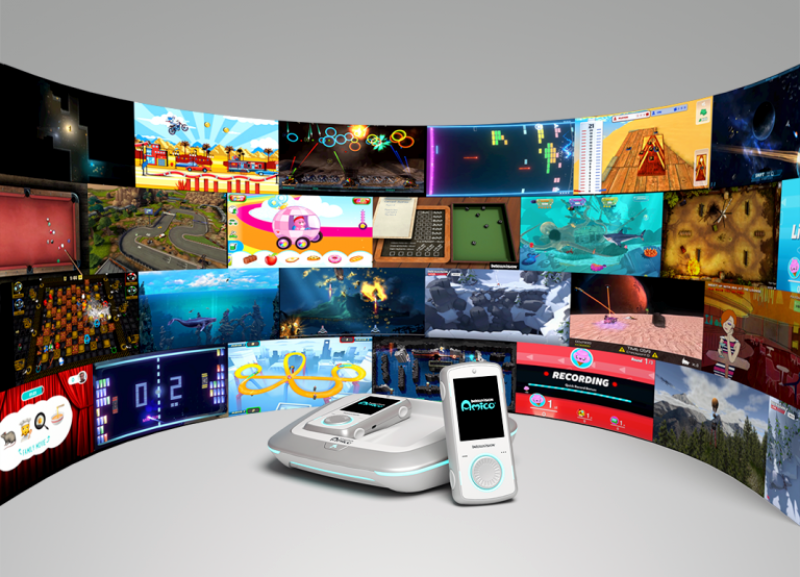 The idea behind this is admirable – after all, any company could slap an HDMI output jack on a smartphone board and call it a day; Intellivision was hoping to capture a bit of the good, clean simplicity of the gaming of yesteryear with its new system.

About the best news, though, for potential Amico devotees was exclusive titles. It is this, and this alone, that separates Amico from nearly every other retro targeted piece of hardware on the market. Rather than be relegated to retro titles, reimaginings and ports, the Amico promised games that would be available on no other system. Some of these games were heavy hitters, too – like the latest Earthworm Jim.

If the Amico project truly fails, this is, what I would consider, the biggest loss to the industry. A modern ecosystem designed around retro titles, complete with new exclusives, is something no one else has tried for. Even the recent Atari VCS has proved quite unable to deliver on such an idea, instead serving as a modern Linux PC designed to run emulated retro Atari titles. 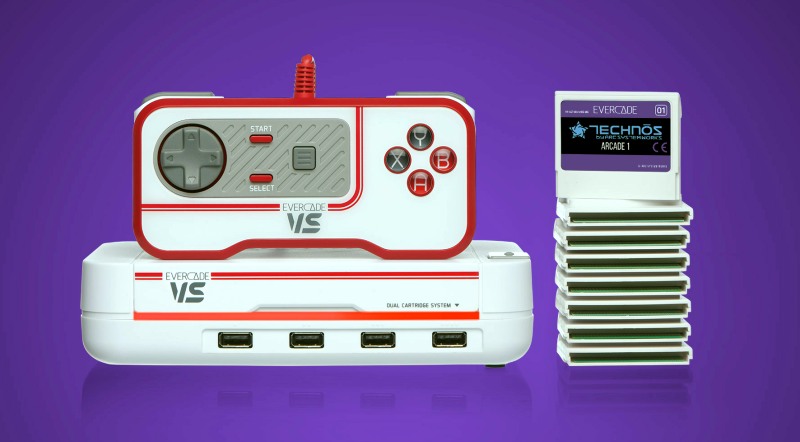 If there were one company (and piece of hardware) out there truly capable of picking up the Amico torch and carrying on with the promise of its ambition should it falter, it would have to be the UK’s Blaze Entertainment and their Evercade VS.

For the unfamiliar, the system (which just released Feb 25th) is the home console version of their popular Evercade handheld – meaning HDMI output, corded controllers with four inputs and (twin) cartridge slots for playing their impressive (and ever-expanding) library of titles.

8, 16, 32-bit and arcade game collections make up a majority of the console’s 300-game library and, of late, are even seeing releases of original titles designed for retro hardware (things like Sega Genesis’ Tanglewood, NES’ Micro Mages).

All of their games come on physical cartridges, in boxes with full-color manuals. 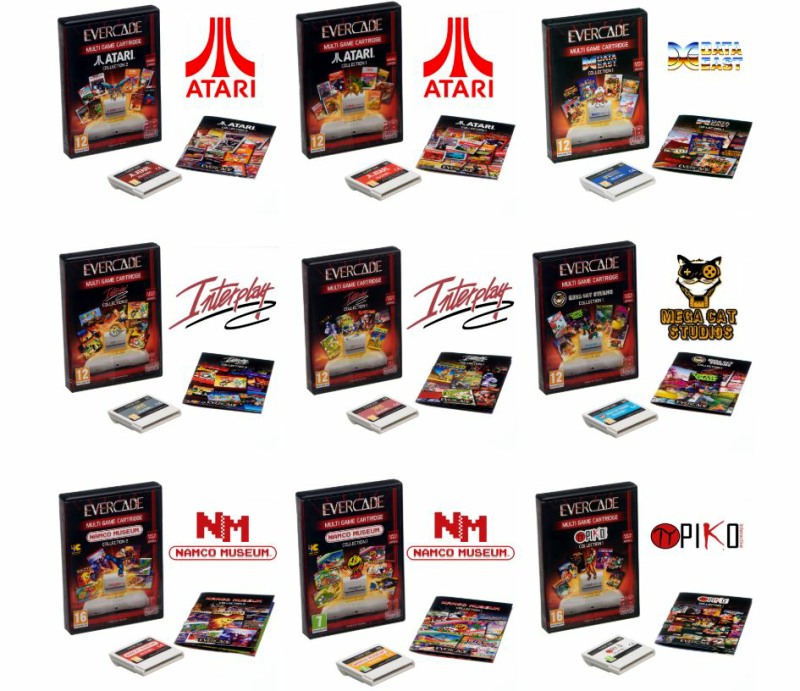 If these guys were to secure some developers willing to release exclusive titles via Evercade cart, they will have managed to accomplish everything the Amico set out to do. Best of all, with a retail cost of $99 with one game and $129 for the two controller and dual game bundle, they are managing to keep the concept well within the budget of the average consumer. Plus, no concerns of vaporware here, the VS is in stores as we speak.