I have quite literally been playing video games for longer than I can remember.  Before I was born, the family had an NES and an assortment of games, ranging from classics like Mario, the oddballs that we love like Amagon, and of course Bubble Bobble.  The first word my brother learned to read was one of the words used to platform as you shot dino snot onto toasters while playing that game.  But there was one game that was never in my wheelhouse - Tetris.  My mom was always fairly good at it, and often we would gather round the screen as she cleared some previously unbroken record.  I recall seeing Mario and Luigi playing the fiddle while rockets shot into space.  But I would never get there myself because my skills were awful at the game.  I took it as just one example of how I am bad at spatial reasoning - I still can’t tell north from south without a long pause when outside.  It became an idea in my mind of ‘well wouldn’t it be fun to be good at that someday’, but that day pretty much never came.  I took a long break from thinking about it until I needed a game for the Switch, and found Puyo Puyo Tetris.  On the Puyo side, my god, I flail like a well worn Magikarp, but on the Tetris side I became competent.  Not good, not great, but I could beat the computer more often than not.  It was a start.

Around a year after Puyo Puyo, I had to convince myself another large purchase was worth it, this time in the form of Virtual Reality.  Tetris Effect had come out, and having a game where you could actually sit down and play in VR appealed to me, so I shelled out the cash, again, for Tetris.  It was a really interesting experience for Tetris - there was techno music blasting, particle effects flying everywhere, and honestly, why would you ever think to put the game in VR?  What is gained by looking around that you don’t get on a 144 pixel cabbage green screen?  After messing around with it for a few hours, I felt fine leaving it on the shelf, so to speak, and moving on to bigger and better things. 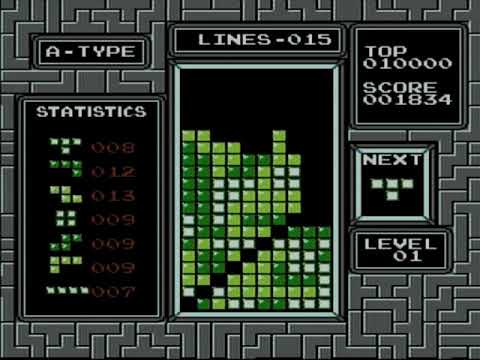 Then came the pandemic.  You know the one.  With everything the way that it was, there was plenty of time to play games, and there were some days where it was hard just to function.  There’s no going to work, there’s no seeing friends, and even a trip to the grocery store can seem like a potentially deadly threat.  Frustration, but mostly cabin fever, came in heavy waves.  In one of those VH1 behind the music kind of serendipitous occasions, I had a youtube video in my feed of some people playing a PvE mode in Tetris Effect - again, why would you ever think to include that in Tetris?  The idea was that after getting so many points, your three boards combine into one super board and you coordinate 3 board wide Tetris’ to attack the computer, while the computer builds score to throw hurdles your way.  Watching the three of them play, and play so poorly, invigorated me.  The mode looks fun!  I can play better than that!  Maybe it would be fun!  So I booted up the game and played online with whichever randoms decided to join, and it was a load of fun.  I realized while queuing that I would rather not have to wait for 2 other people though, and just began to play the game’s campaign which, naturally, it has.  The game finally ‘clicked’.

The campaign is set up in multiple segments.  Each segment is a new song, new skins for the tetrominos, but keeps your overall score.  After you beat a segment, you save and can move on to the next segment.  It starts in silence.  As you drop and rotate pieces, small ‘stings’ of music play.  You gradually build your tower, and suddenly the music begins to fade in.  As you clear more and more lines, vocals come in.  The drop rate for the level may change drastically as the song has a key change or tempo shift itself, and thanks to the ‘stings’ you get from your inputs, you feel really in tune with the music.  The first song in the game is also the game’s theme: Connected.  You can play with friends.  You can play against them.  Even if you just play a Marathon mode, it still shows you the world and other players.  Each song goes on a journey of genres and locations to give the same ‘connected’ globetrotting feel.  Then, for the first time, I got to the last song in the game.

They made a boss level.  In Tetris.  Well, not really, but hear me out on this:  on medium difficulty the drop speed starts at 1.  At about drop speed 15, you don’t really see pieces drop to the board any more, then just fall.  The last level starts at speed 10, which is blisteringly fast for someone with my skills.  Not only is it super fast, but instead of the usual 36 line ‘clear’ condition, it is instead 90, meaning it is nearly triple the length of every other level in the game.  The biggest saving grace to my swiss cheese monument to failure is that the game has a ‘zone’ meter - as you drop pieces, you gain meter which you can use to stop all gravity and drop at your will.  Cleared lines do not disappear and once you remove a line, the game will align your junk rows together, making it much easier to clear your mistakes.  While in the ‘zone’ the music is muted, with the exception of your stings, now more prominent than ever against the backdrop of near silence.  After clearing a few lines, the speed drops to a more manageable 7 - still intense, but now seemingly much slower.  Then the lyrics kick in.  After clearing yet more lines, the boss shifts to its final phase: speed 13.  Where before you had wiggle room to decide your next move, I commonly didn’t realize that two pieces had dropped and stacked on each other until the moment was far gone.  Assuming you clear all 90 lines, and have beaten every stage in sequence before this, the game grants you the ultimate catharsis: unlimited zone mode as the music swells.  As the last of the meter wears out, the lyrics crescendo to a finale as the screen is wiped away.

Let me say a preface to what comes next:  I am a very musical person.  Not in the theory way (I still don’t know what the circle of 5ths is, and at this point I’m too afraid to ask), but I get very emotional connections with music and lyrics.  From a discovery of Pink Floyd to getting upset thinking about Auld Lang Syne, there have been quite a few moments where I have been touched by music.  It might just be the pandemic, it might be me being single for years, or it could just be the beauty of how everything comes together in this game, but I actually got emotional over the ending of Tetris.  While the first song is about how the entire world is connected and a message of harmony, the last song is a message about breathing in all of the beauty that the world has to offer, and that everything good is in your future.  Not only was it hearing any words of comfort and optimism, thoughts of love and harmony, it was the entire experience: listening to the music, being a part of it by affecting the beat with my movements, realizing that they made a good boss fight by incorporating every mechanic in the game, and just being tied to this world for an hour (about the time to complete the campaign mode).  As the screen fades away, instead of going to the normal score screen, instead it takes a trip through the particles in the background, forming a pulsar and eventually a planet earth while giving the music its own encore followed by ambient sounds nature.  And it is so damn beautiful!  It just feels like a warm hug of an ending.  The game saying that you are alright, the world is alright, everyone is alright, all done through this beautiful interaction that you have with the music.  On my list some 30 years ago, if you told me that I would have an emotional journal through the game of Tetris, I never would have believed you.