The PS1 era saw the birth of many new franchises in gaming and a common trend between many of them is how the first game introduced core concepts and ideas that the sequel then improved upon and elevated to new rights. In many ways, Tenchu 2 looks like it follows that trend. With improved mechanics, improved mission structure, and a more focus on narrative than the original.

Yet, the game also inexplicably takes as many steps back as forward. It has a less varied mission structure, and its PS1 visuals are not saved by the good design and art direction of the first game. Most criminally, there is no soundtrack in the game's levels unlike the excellent soundscape of the original.

As such, Tenchu 2 ends up in exactly the same position as its predecessor, but with entirely different weaknesses and strengths. 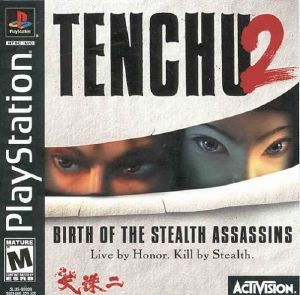 "A world ruled Ninja. We will no longer be forced to hide in the night like thieves. We will decide how we live and how we die"

As the subtitle of the game suggests, Birth of the Stealth Assassin, this story is actually a prequel to the first game that details the history of the Azuma Ninja and Lord Gohda whom they serve. Like with the first game, you can pick between one of the two protagonists. The stoic Ninja Rikimaru, or the feisty Kunoichi Ayame. Once you complete the game with both of them, you unlock the story of Tatsumaru, the third young member of the Azuma ninjas.

From a narrative point of view, the story follows many classic revenge story tropes with honor and duty in the background, and it clearly lays the ground for how the characters develop into the versions we are more familiar with the first game. The story might hinge on some overused cliches, but that's to be expected in that era of writing. 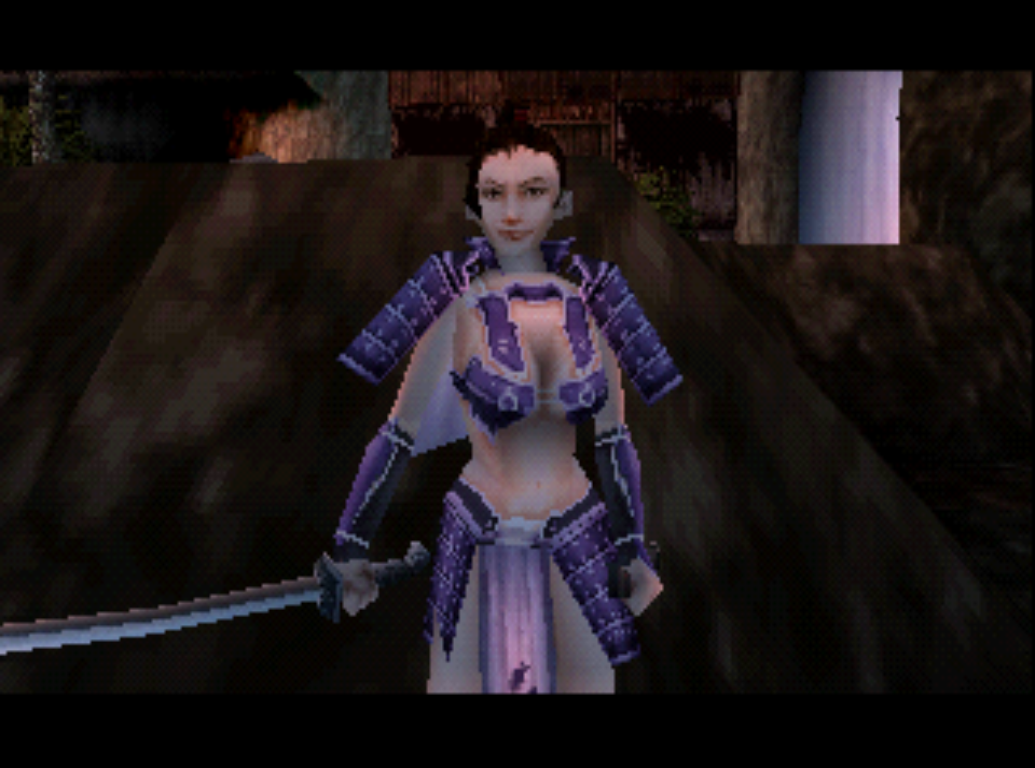 In the middle of a civil war in the Gohda lands, the Azuma Ninjas find themselves trapped in trying to protect their lord while a shadowy organization, the Burning Dawn, tries to create a country for Ninjas to rule and be free in (after apparently killing or subjecting all non-Ninja). Even though the end goal of the Burning Dawn is ridiculous, and the outfit of their leader an extremely impractical distraction, the story is at least engaging in a funny way.

What's not engaging however is the entirety of Ayame's voice acting performance, which completely kills any dramatic impetus in her scenes, and is not bad enough to be funny. It just comes out as really weak and a clear outlier when the rest of the voice cast oscillates between professionally competent to somewhat decent.

In a way, it fits her now weirdly cartoonish face.

"Unforgivable crimes must be punished. The traitor must die"

Being an Action Stealth game featuring Ninjas, Tenchu 2 is a deliberate game about exploring your surroundings and planning your attacks from the shadows. That is communicated at the beginning of each level, where you prepare by bringing in a few useful items (which I rarely ever needed to use), and the few objectives you are handed.

Nearly each level tasks you to reach a certain point and the nice feature in the second game is how the map fills as you explore the level, which helps against getting lost. While most levels do not fail you if you get caught, you are graded based on your stealth performance at the end of each mission. 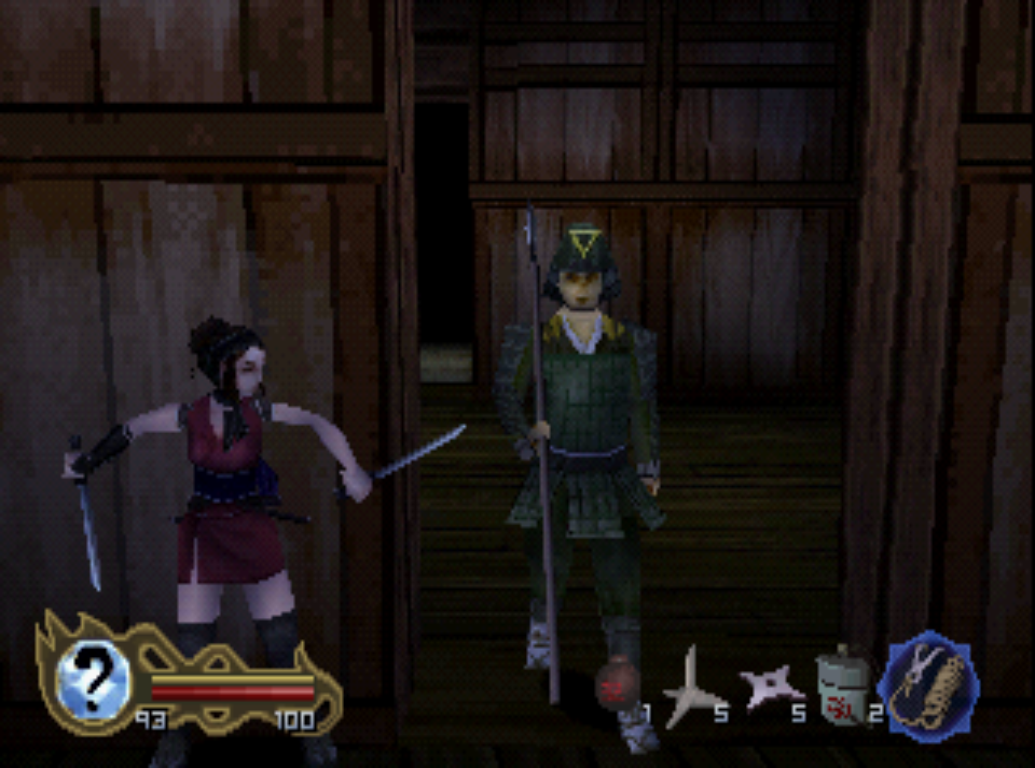 You are generally rewarded for not getting caught

Playing the game and trying to get a high score is the proper way to go, which means you need to be careful as you advance and pay close attention to your Ninja sense. Since the game has only slightly better draw distance than the first (which it justifies by using the weather as an excuse), then that sense radar is your best tool in approximating the location of your enemies.

It's worth noting that Tenchu 2 doesn't have the same verticality as the first game, which explains the weaker utility of your trusty grappling hook. Instead, levels are larger, and some have cavernous rooms and underwater passages.

Generally, despite some similarities in level design and the repetition of playing some levels with two characters, the game is really fun if you try and avoid all enemies and be a master Ninja.

"If he had dishonored himself, only death at the hand of an Azuma Ninja will purify him. You must be prepared to kill him"

If you played the first Tenchu then the first thing you will notice with the sequel is how much faster and more fluid the character movements are. In addition to more fluid general movements, there are also steps you can take while crawling, longer jumps, evasive maneuvers, and even the introduction of swimming.

This makes the game's central mechanic of sneaking behind enemies and killing them much more fun, and even improves the first game's wonky combat. Yet, the mission design is actually a downgrade, with little variety and most missions requiring you to reach one area in the level's labyrinthian map. 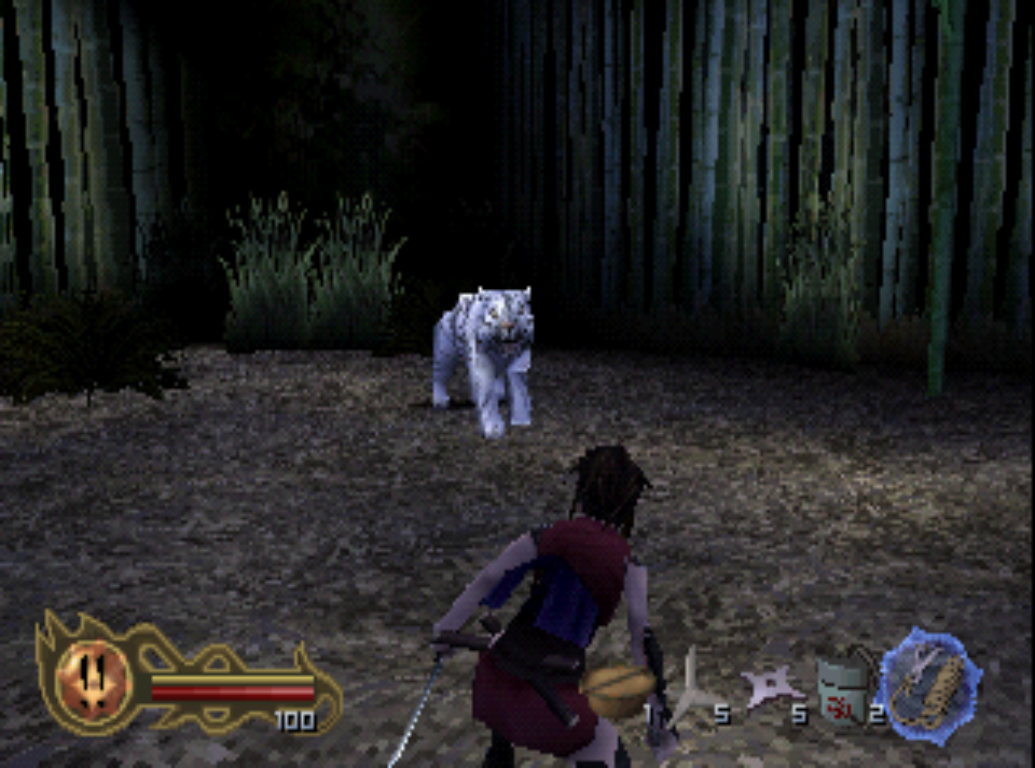 But being caught by tigers doesn't count

Almost always, at the end of each level, there is a boss to fight. Combat is better in this game, but it still suffers from some camera issues. Initially, playing with Ayame, I thought combat was extremely hard. However, it turns out Ayame just suffers from reach issues and Rikimaru is, therefore, a much stronger fighter.

So, while the game feels better to play, it doesn't look like the level and mission design were given the same attention. As a result, most missions are somewhat samey. Ironically, there is an included mission editor in the game, and players could craft more interesting missions with it if they wanted.

With the experience of the first game out of the way, the team at Acquire must have felt confident that they could make a bigger and more visually impressive world. At first glance, it seemed that they were able to do just the thing by looking at their impressive CGI videos, and then by looking at the bigger size of their levels.

However, just like with the smudged face of Ayame, you feel like there is a weakness in artistic design that leaves the game world feel less barren and impressive than its predecessor. At least, it varies in quality from one type of level to another, and they rarely seem to have the consistent vision that the first game enjoyed. 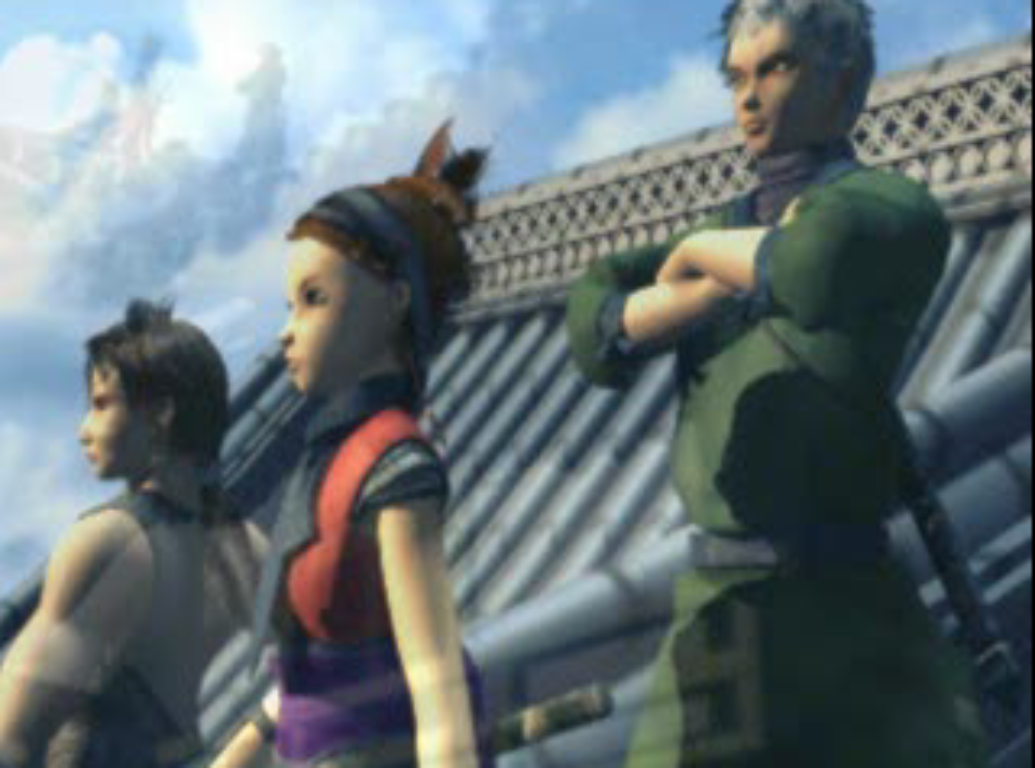 The CGI images are really good for the time

Still, the game's graphics are not exactly downgraded. The same courtesy cannot be said of the game's soundtrack, which is criminally non-existent. Tenchu's soundtrack was a unique fusion of sounds that made each level extremely memorable by sound alone. Surprisingly, the second game makes the daft decision of not replacing the soundtrack exclusively with atmospheric sounds and noises.

That in itself could be forgiven if there were areas where an excellent soundtrack could shine beside the singe boss battle track, but it is just atmospheric sounds all over. When you remember the excellent soundtrack of the first game, you gasp at the stupidity in play here.

In a way, that's much worse than the inconsistent voice acting in the game, which fits the early character of the game and is at least half-competent with the notable exception of Ayame's terrible performance.

Tenchu 2 takes a major step forward with its gameplay mechanics and focuses on the story. It's narratively tighter while being more pleasant to play, even if the level structure is a bit repetitive. At least the core mechanics are fun to control.

If it added that aspect on top of the first game with the slightest of graphical upgrades, then it would have been an obviously superior sequel. Yet, it also decided to take some step backs in its art design with some notable graphical downgrades in textures and some character faces as a result. Most damaging was the decision not to follow the first game's excellent soundtrack and instead opt for a purely atmospheric score.

For these reasons, Tenchu 2 fails at being a better sequel and instead works as a weird kind of sidestep, the kind that nearly thrust you into the vision of an enemy. 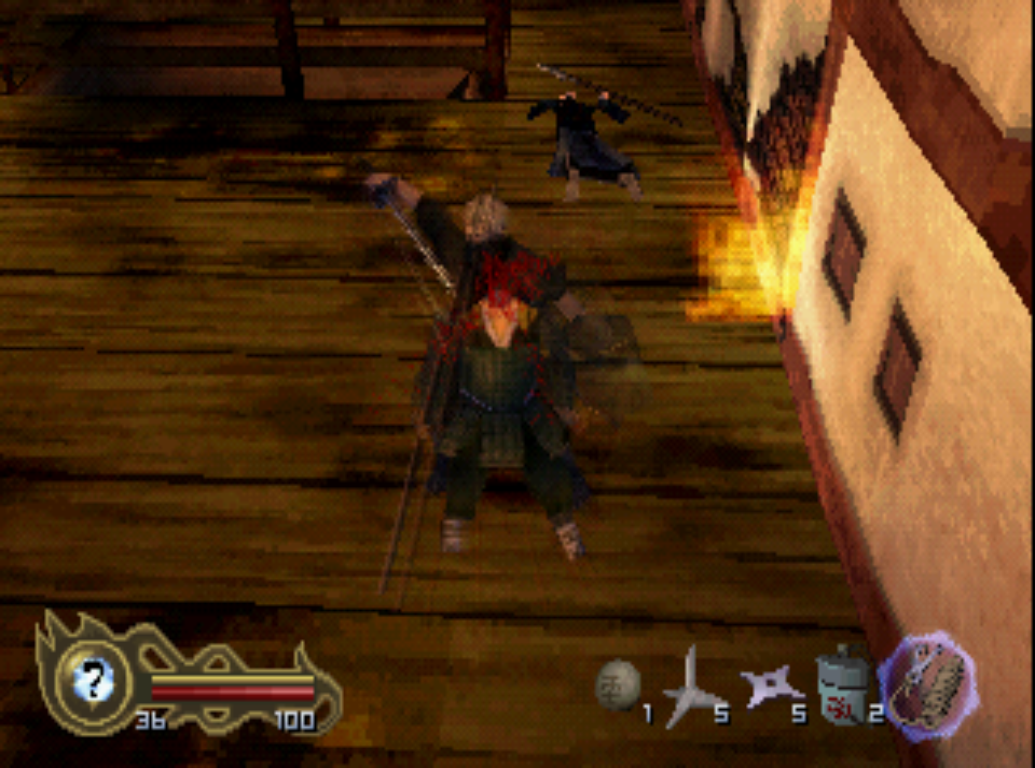 1-Use your grappling hook well.
2-If you are planning to only play it once, use Rikimaru.
3-Guarding is really useful in boss fights, and so is paying attention to distances.
4-Sneaking also means running to guard and slashing them from the back.
5-It also means jumping and slashing from above.
6-Press select to open the map, which fills as you explore the level.
7-Use water to your advantage, as you can hide under it and quickly sneak up enemies.
8-You can also swim fast and launch yourself from the water for a difficult to execute slashing attack. 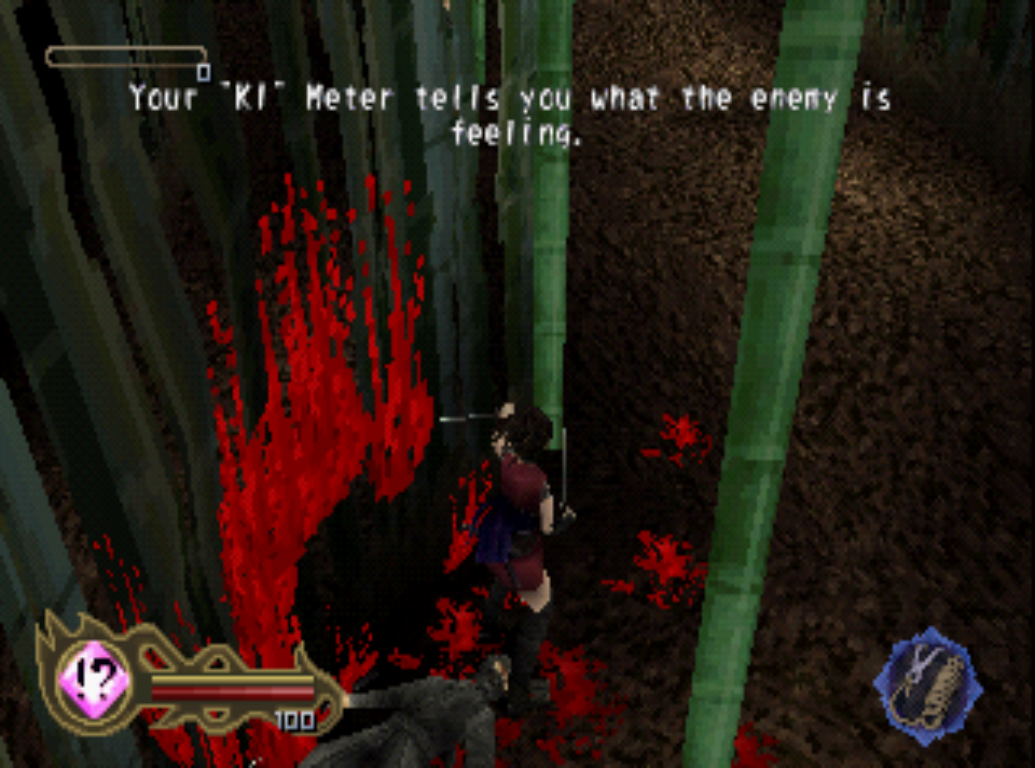 I bet he is feeling pretty dead 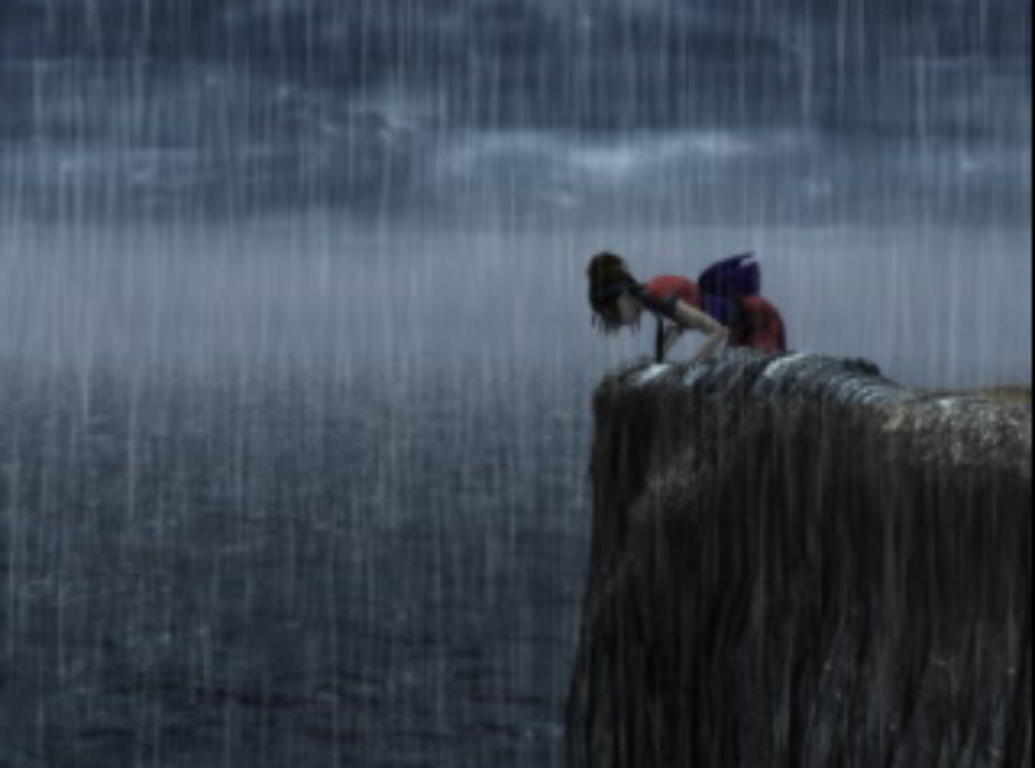 Me when I realized the game doesn't have a soundtrack

If it just had a decent soundtrack, then Tenchu 2 could have been comfortably better than the first, but they just had to ruin that. I did have fun with the game, but it could have been a better experience otherwise.

The next game on the list at #52 should have been a space combat simulator, called Colony Wars: Vengeance, which is supposed to be one of the best of its kind. However, I tried it and didn't find it to be more than a technical showcase of the times that is both confusing and boring to play. So I am just going to report on the top 51-60 games on the Retro Sanctuary list before I go back to the addendum list and play Little Big Adventure.