Pat, you still aren't up to date?

Nope. But almost! And yes, I know I could simply skip the prior years and go straight to 2021 - but I've kept track of some decent reads and I want to tell you about them! I of course did not anticipate the pandemic, but it did wonders for my reading, movie watching, and game playing numbers in both 2020 and 2021. This was also the first year I started tracking the dates I finished books and games, as well as started using the Goodreads app to log my progress. (Edit: LIAR! You started midway through 2019!) I'm all about a good stat. Also apparently the first week of January is prime blogging time for me.

Away we go! I'll also minimize my hindsight editorializing, except for Watchmen because it's so on point!

9/10 - Hindsight being what it is, the fact I read this as my first book of early 2020, finished in January while hanging out in a hotel in DC, followed by a few days in Chinatown NYC - it amazes me that Ozymandias was in fact too aspirational in his hopes that a global issue would unite humanity. But I guess that's why he chose a giant space octopus vs. a plague. Fingers crossed for our giant octopus overlord arriving sometime soon.

In any event, I enjoyed reading this one for the first time. I am also an OG Watchmen movie apologist because I loved it, so take that as you will.

8/10 - fascinating read that was long overdue as this is one of the earliest books in my library back when I started buying books again after returning to the US. This one is looooong, but moves at a good clip and was thoroughly interesting. I have yet to watch the show on Hulu but that's perhaps on the list for 2022. It did make me want to replay Return of the Obra Dinn immediately as well.

1/10 - Sigh. I adored this author's first book, Juniper Berry. His second book, The Dyerville Tales was not very good, and Rose Coffin was just terrible. The story itself was serviceable but any time a book's ending undoes every last bit of that good narrative work makes the read feel like a waste. Hard avoid on this one.

9/10 - biased since King is one of my favorite authors. Read The Shining in 2019 in prep for this and to watch the movies, which I did both in 2020. I really enjoyed Doctor Sleep although there is definitely some potentially triggering stuff in there. Overall well written, a fitting sequel and one I recommend reading for sure to any fan of his or The Shining.

7/10 - Frankly I can't remember this one anymore, but I'm an unabashed Jack Reacher fan. These are pure popcorn books - entertaining to read, fairly forgettable. I'm bummed he's retiring as a writer and I have zero faith in his brother, Andrew Grant (now writing as Andrew Child) to handle the series well (see Grant's abysmal Die Twice). In any event, Midnight Line is worth a read for any action fan.

8/10 - the finale of Clines' EX series, which has been a pleasure to read over the years. Superheros + zombies, you can't go wrong. I recommend the whole series, there's only 5 books and they move at a good clip. The only one I disliked was EX-Purgatory but even that was fine. A fun series regardless.

9/10 - I love all of the Henning Mankell/Kurt Wallander stories and this is no exception. This is a series that, spoiler, I finished in 2021, but with each book read I mourned the finish of the series that much more. The Wallander books are lovely mysteries, well-written, and give a healthy does of Northern European-ness to them that I miss so much. I've now started the BBC Kenneth Branagh series and it's been a lovely thing to see the books play out live.

?/10 - Frankly I don't remember this at all. I try to read at least one self-improvement type book a year, and I guess this one was it.

9/10 - Ditto above, but getting sadder now because I'm nearing the finish of the series. The author is dead and Wallander is getting older with each book. I love it.

0/10 - I loved the Hunger Games trilogy to bits and was excited by this new one from Collins, despite its absurd length. Ultimately this book was terrible, didn't advance anything forward, really didn't give much insight into future President Snow's character, didn't set up sequels, and perhaps was just Collins' effort to capitalize on Disney's "humanize the villain unnecessarily" movement. I'm not sure, but a really crappy book.

0/10 (tough year!) - this was almost a Did Not Finish (DNF) and I skimmed the last maybe 200 pages. It was painfully boring, not the "space opera" it was billed as, and never really did much of anything. In fact, it didn't even do what the description on the jacket said! This is of course the first in a series, but it's pretty poor when the book's own jacket says more plot than what actually happens in the book itself. AVOID AVOID.

6/10 - this one was just OK for me, and I can't put my finger on why. Maybe because I read so much good King in 2019 and his more (for now) grounded stories can be hit or miss. I still enjoyed it but didn't rush off to read the sequels, which I will get to eventually. I also heard this is a show with Brendan Gleeson? IDK how I feel about that.

9.5/10 - I infrequently order books on Amazon based purely on the "Recommended" stuff or based on flowery new reviews, but this was short enough and interesting enough that I gave it a whirl. I was pleasantly surprised throughout and really enjoyed it. By the end, I had to re-evaluate everything I had just read - which is really hard to prompt from a writing perspective, so what the authors accomplished here is impressive. The prose could be a tad purple and it got confusing at times, but they definitely stuck the landing and this was definitely a nice surprise for the year.

8.5/10 - I wanted to read this before watching the HBO show, which I did in both regards and enjoyed them both differently. I do not love that this is a White male writing about distinctly Black experiences and using language from the Jim Crow South. Notwithstanding that, I enjoyed Lovecraft Country quite a lot. I was not expecting it to be a series of vignettes much like Resident Evil Village in terms of story format, but overall I think the book was great and a worthwhile read. I liked it differently than the show - which I also enjoyed, but which changed things around in ways I didn't always care for - though I'm often a book purist when there are TV/film conversions.

Word-salad/10 - I disliked The Peripheral for the first 100 or so pages. This was my first Gibson novel and the fact that he does absolutely no scene-setting or world-building, explains none of his voluminous made-up jargon, makes the book very difficult to get into. I'm very hesitant to read the sequel, Agency, and who even knows if Gibson will write the third of this supposed "Jackpot Trilogy" - or even whatever the hell the Jackpot event actually is. All of this to say, I still don't know how I feel about this book. After the first hundred, it was more like a standard sci-fi novel, but also having a quasi-main character seriously named "Wilf" was a consistent nit. IDK y'all. Give it a read, or not. It's a weird one.

6/10 - here's another random purchase based on Amazon "Recommended" and it was actually pretty OK. It was a fast read, interesting plot, but the ending pretty well fell apart and clearly set up a sequel that I'm not sure I'll get to. I think it was a worthwhile read, but I don't know that I'd go out of my way to recommend it.

9/10 - I challenge you to find a more engaging and accurate history of pro wrestling than this. It covers start to present-ish day (2019, I believe) and is a fascinating read. Highly recommended to any fan of The Greatest Sport (TM).

9/10 - Loved it to pieces. My first foray into Star Wars novels in a very, very long time. It was so lovely that I immediately queued up the sequels, bought the Boba Fett Bounty Hunter Wars trilogy, and plan to keep digging into these stories. I highly recommend the Republic Commando series, even as someone who has yet to play the game!

4/10 from a reader's POV; 10/10 from a writer's POV - what a pretentious load of crap this book was. I remember years ago being told this was a life-changing book, which of course set it up for failure whenever I would actually read it. The plot is fine. It is for sure interesting and a fascinating read, but as a pure novel from a reader's perspective, it's just OK. Now, though, from a writer's perspective, it is incredible. The things Danielewski does with format, pacing, narrative back-and-forth, an astronomical amount of fabricated citations, and the sheer physical experience of going through the book, literally turning it and the reader on their side and head, is just *chef's kiss*. It was an encouraging read for a writer. As an avid reader, it was fine. 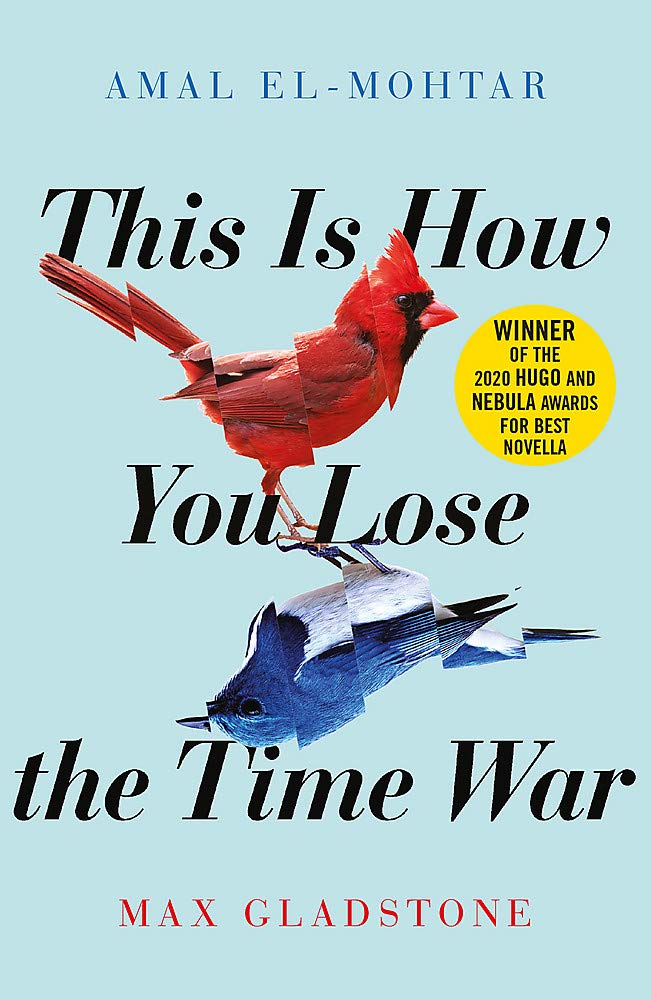 I actually struggled picking a BOTY for 2020, there were no really clear front runners. I chose this one because I think it did something different and on finishing, altered my perception of the whole reading - which is hard to do. I don't think it's the best thing written in 2020, it's fairly pretentious in the amount of raving press its gotten, but it's a short enough read that I think is worthwhile. Not as life-altering as the reviews would lead one to believe, but a tight novella that I enjoyed in a terrible year.

- ~ I have to return some videotapes ~