5 years of of writing reviews on this site and I'm still around, huh? That has to count for something. I'm not sure what, but it's been quite the capstone year for me at the very least, so let's get into it.

My debilitating wrist injury from last year started subsiding around spring and effectively went away this fall, which has been liberating in so many ways. You don't really think about how awesome hands are, even when you love hectic action games like I do. And at this point, I've kinda forgotten about being hurt to begin with even. I guess I was so incredibly focused on getting better, that when it happened, I immediately accepted it as the status quo again.

That allowed me to finish up my Tales marathon, culminating in my retrospective of the series, which is my big achievement for the year. It was a lot of work and I think I managed to give each game its fair shake. It's a series that overall quite good and it's a shame so many of the games are sealed within the PS3. Bandai Namco should really get off their asses and port more of the games forward.

Beyond that, I spruced up my output by writing about about games I cleansed out of my backlog (which is still looking slim, by the way), crafting, lore, immersive sims and Dark Souls. I'm happy with all of those discussion blogs, but I can really feel my creative juices running low, which is why I'm changing my approach for next year, more on that at the end.

I'm doing that partially because I've finally landed myself a job and worked out a life schedule that gives me tons of time with my friends, with little time left for much else. Seeing how hard it is to make time for friends generally, I'm gonna run this schedule as far as it goes. Gaming on my own and writing about it is fun, but you gotta take your chances to hang out with your friends when they're available. Not overworking yourself when you have an actual job is also nice.

As for the actual games I reviewed, I got a good mix, like I often do. I didn't even fall back on a Ratchet & Clank game this year as a crutch, which I'm happy about. Though in order to fit in so many games I hadn't played before (and to rest after the Tales retro and my Halloween marathon), I took a few months off. That restricted my output a little bit, but I'm all the happier for it. It also forced me to prioritize the games that were the most interesting to talk about, which hopefully came through in the text.

Sometimes I just review a game to review it, even if there isn't a lot of material to work with. As a hobby reviewer, I should really exercise my freedom and pick stuff I really want to analyze or spread the word on. Then again, sometimes I just feel lazy. Such is the ebb and flow of creation.

I find it amusing that I began and ended the year with a Tomb Raider reboot game, which was in no way intentional. I like them both, and getting a dose of AAA mush is nice every once in a while, but I think I should have post-poned the second one a little bit more. But I couldn't allow games with huge install sizes to remain in my backlog with Elden Ring on the horizon. That game could be huge for all I know and I'm ready to dedicate all the SSD space I have for it.

There were a few more reboot games in the pile as well, which is always an interesting and charged topic. Not all reboots work the same or serve the same purpose. And if you throw in remasters and remakes into the ring, you get a hot and sticky mess of a discussion about artistic integrity, the march of time, the loss of series identity, what counts as a sequel and the like. I could probably get a few thousand words out of that.

I'm really happy with my Halloween marathon, even if it came a bit close to getting delayed. Aside from tapping into the unending spring of Resident Evil, I finished up three whole trilogies of games, each one with some interesting quirks I can now comment on. MediEvil is a franchise that runs in circles, as the majority of it covers the same events, much like Star Fox. I reviewed the first game, it's PSP remake and the sequel, with the PS4 remake being ignored due to its similarities to the original release.

What was sad to pin down was that only the first game and its PS4 remake are any good. The PSP remake lost its atmosphere and some levels, while MediEvil 2 is just unfinished. I'd really like to see a remake of that next that goes further than just touching up the assets and controls. What 2 really needs is a complete story and more levels. We don't get enough spoopy skeleton games, so I hope that comes to pass some day.

The Fatal Frame trilogy on the other hand is extremely solid and was almost worth the exorbitant price I paid for it as a European. It's the horror game series with the best combat, some solid replay value, good scares and some nice theming. Sadly, it gets kinda repetetive and the characters are very flat, so when I came to 3, I was a bit tired of it all.

But Fatal Frame 3 is nowhere near as disappointing as the Siren franchise, which is thoroughly mediocre. The reason why that is so frustrating is because the thematic foundation of these games is so damn interesting. The first game features religious intermixing, ambigious story elements and some excellent design ideas. The second game leans even more into Lovecraftian elements by putting the characters into an incomprehensible conflict of monstrous proportions. And the remake plays with the horror movie inspirations of the series by being the shlocky "American Remake" of the first game. 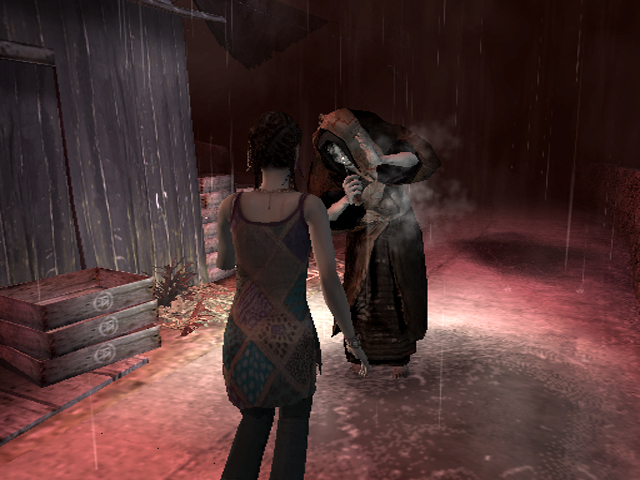 The sheer amount of effort that goes into the props for the archive items in each game is insane. In Blood Curse, they even go as far as saving some photos from an ingame camera to your PS3 photo folder, that's amazing!

Buuuuuuuuuut, the games play like crap, even by survival-horror standards. You have very little freedom and with the focus on stealth, failure is around every corner and the checkpointing sucks. It's a series best experienced second-hand by wiki-diving and watching LPs like I did with the Silent Hill games before I could play them. Here's hoping Slitterhead manages to be good, that team really knows how to design freaky shit.

With those trilogies done, I might have to break out the emergency Silent Hill games actually, but I feel like I've held out pretty well until this point. There are only so many survival-horror games with enough budget to be interesting. But I did get Darkwood as a Christmas gift and I wanna play Eternal Darkness, so I can probably manage one more Halloween marathon.

But before I get there, I have something else of great importance to accomplish, which will eat up most if not all of my writing time next year. If you've stuck with my writing since the beginning, you'll know that I started writing here by doing a deep-dive retrospective into From Software's first-person RPG and adventure titles.

At the end of that, I dropped a hint about what series I would tackle next. And now, after 4 years (and a more compact Tales of retrospective), I've finally worked enough reviews and discussion blogs through my system that I wanna fulfill the promise brought on by this image:

I've still got a bunch of pre-production to do before I can work out a release schedule (research to do, footage to record, screenshots to take, analysis to do, structure to decide on), so I implore you (like always) to check out some of my reviews from this year that you might have missed while I get my stuff in order. And since I'm such a helpful individual, I've listed them all below.

And if that somehow wasn't enough, you can always check out my summaries of past years and their respective reviews.

See you next year for all 4 or so reviews I'll have time for after the retrospective is done. I'm going to word harder than anyone else on this site has ever done before!