The advent of the PS1 and 3D gaming lead to new ambitious and creative developers entering the field, and as they crowded each other in an established market, it was clear that successful games from non-established franchises needed something creative and interesting to differentiate them.

Enter Tenchu, which probably is the first successful implementation of Stealth Action gameplay in a 3D space. From its stealth-centric gameplay, the Sengoku era Ninja setting sprung through. It succeeded and cemented Acquire as a full-fledged developer to this day.

Yet, as can be seen from Metal Gear Solid just six months later, the many technical difficulties that Tenchu couldn't solve drag it considerably down, and it exists more as an interesting relic today than the cutting edge masterpiece that it may have been at its release. 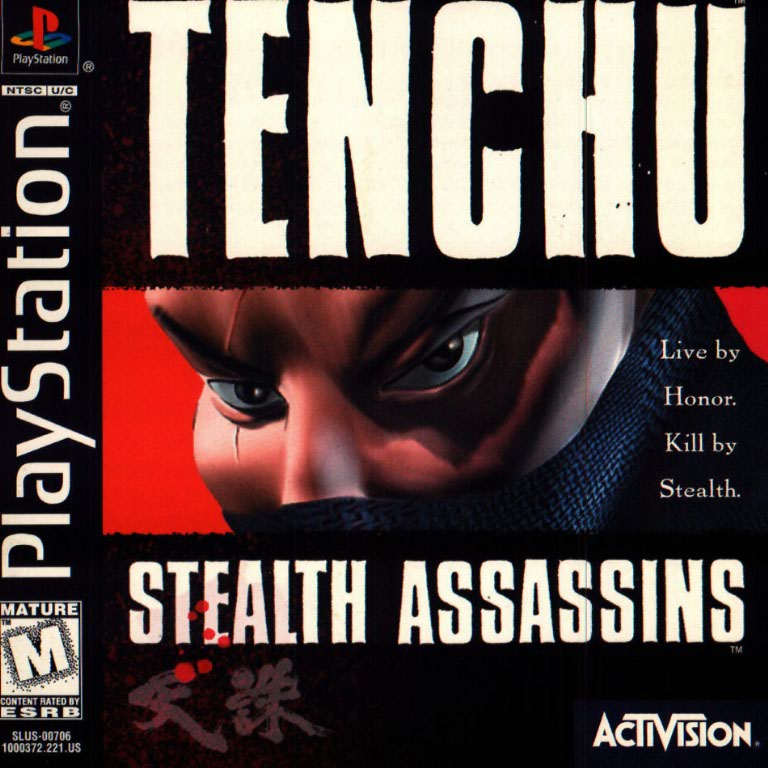 "Lord Gohda expect much of you, the enemy will be skillful and relentless. You must be prepared physically and spiritually"

As one of two ninjas under the employ of Lord Gohda in the tumultuous Sengoku Era of Japan (16th century), you are tasked with various underhanded espionage and assassination missions to keep the peace. These missions range from assassinating a corrupt minister to sneaking a message through enemy lines, and the story in each mission usually resolves in one cliched one-liner or another.

There is no real depth behind the story of Rikimaru and Ayame beyond their established character tropes, and the introduction of a semi-demonic ninja foe doesn't improve things much. Not that it needs much improving if we are honest. 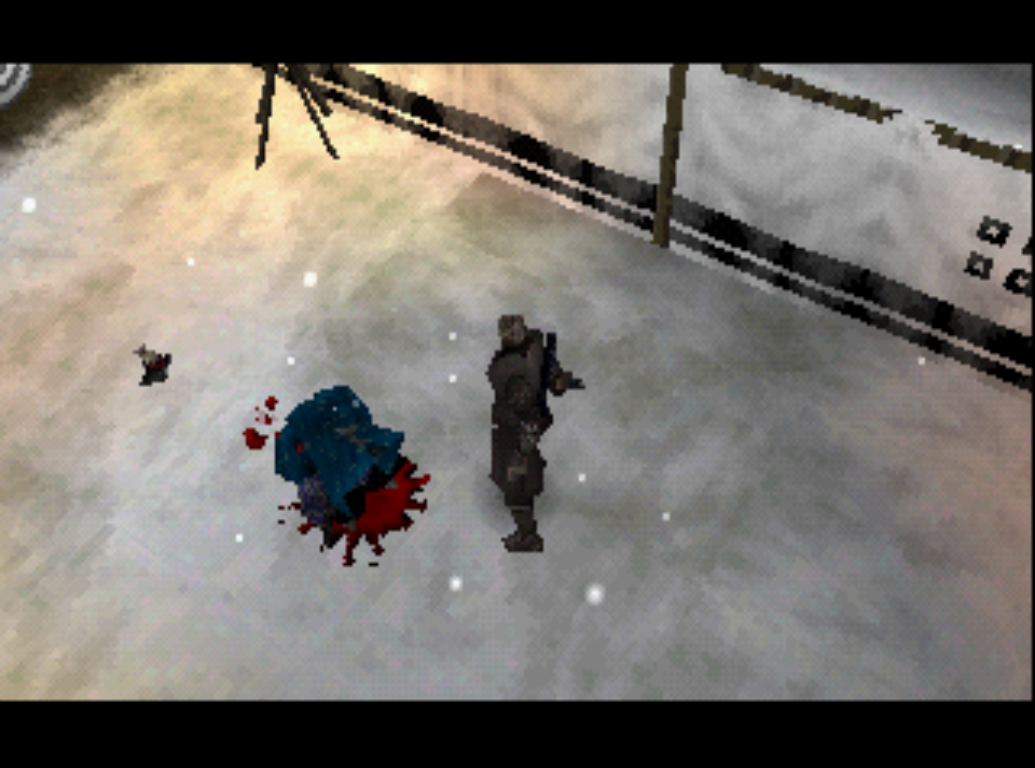 It's a basic story about a Ninja's duty to their lord

Basically, the story and the setting serve to make convincing missions for your characters to go through, and the variety between looking for a character to kill and a simple stealthy traversal of a dangerous location is welcome.

Some may even appreciate the abrupt introduction and ending of interesting-looking characters, as that might remind them of the speed at which characters are thrust into the limelight just to die as in an Akira Kurosawa Samurai movie.

"Your greed sickens me. I hope your death is a lesson to others"

With 3D gaming at its infancy, the reality of its limitations came against the ambitions of Tenchu in two ways. First, a ninja must traverse with speed and take advantage of heights and rooftops. Second, a stealth game requires careful preparation and observation to plan your route of assault. Both aspects of Tenchu's gameplay were impacted by the complications of running the game with a stable framerate at an acceptable resolution.

As a result, the player character's movement was necessarily slowed down, and the draw distance was significantly limited (with a nighttime setting used as a convenient excuse). Naturally, these limitations could severely hinder the game.

To solve the first issue, the developers made an extremely useful grappling hook that could zip you from place to place at high speeds. At that moment, the camera goes into first-person view, and it looks like your character simply teleports to the new location. This trick goes a long way to give you an unparalleled sense of motion, but your character still moves slowly in the main third-person view and has a pitiful jump that could barely bridge the gap between two nearby rooftops. 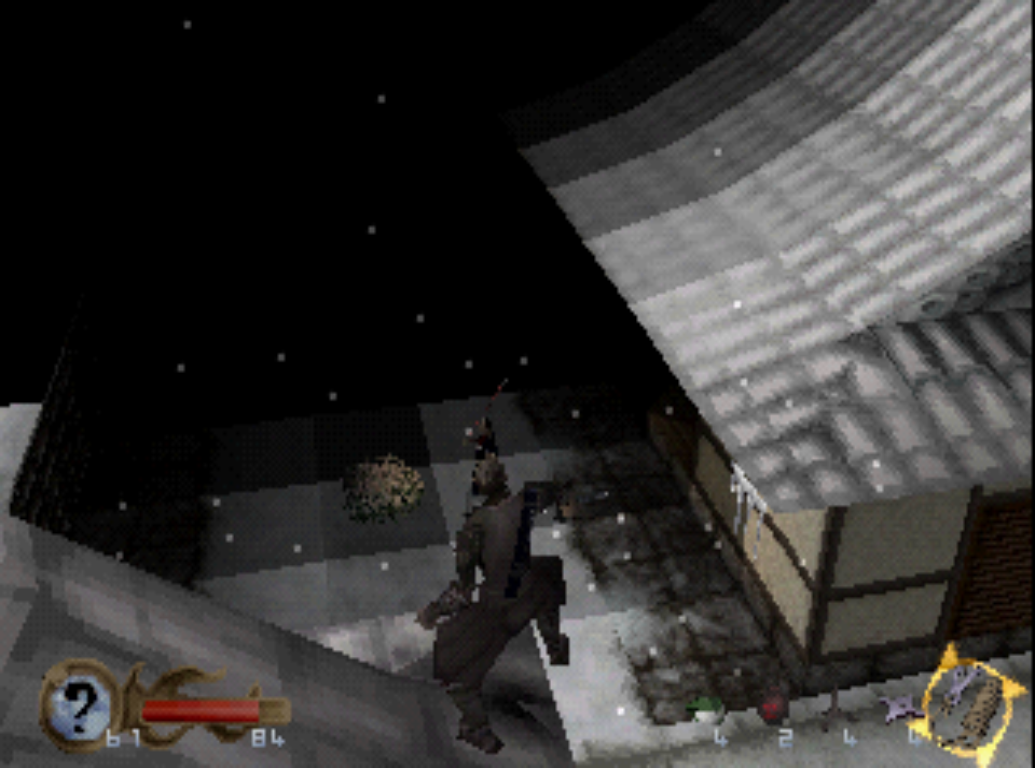 Unfortunately, the solution to the second issue isn't nearly as comprehensive or effective. Since the draw distance is pitiful, you are more likely to stumble into their path and be drawn into a fight than notice them and hide. As a solution, the developers gave you an energy meter that senses the proximity of enemies and their state of alertness. However, this meter switches frequently between nearby enemies and doesn't take verticality into consideration, and as such is not a replacement for direct visual referencing.

This, coupled with a directionless map (where your objective's location is never spelled out) leads to a trial-and-error approach where you attempt to figure everything through your mistakes. Apparently, the game was built with that in mind, as you are ranked at the end by how stealthily you achieve each mission. Yet, I doubt anyone could achieve true mastery the first time since they are bound to stumble into enemies while looking for their hidden objective.

The main attraction of playing Tenchu is in playing as an actual Ninja would, with stealth and deliberation instead of over-the-top action. This in fact was the reason Sony hesitated to publish the game themselves in the West because they thought the Western audiences wouldn't like playing as a stealthy Ninja.

Of course, they were wrong, and the success of this game and others like it proved that Japanese perception of Western gaming tastes was severely faulty.

In Tenchu, you begin by preparing for the mission at hand by carrying a few helpful items. Shurikens can be used for ranged attacks and as a distraction, poison riceballs are a huge boon against guards, and smoke bombs can help you escape unharmed. Once in a mission, you are aided by whatever items you picked up and your trusty grappling hook. 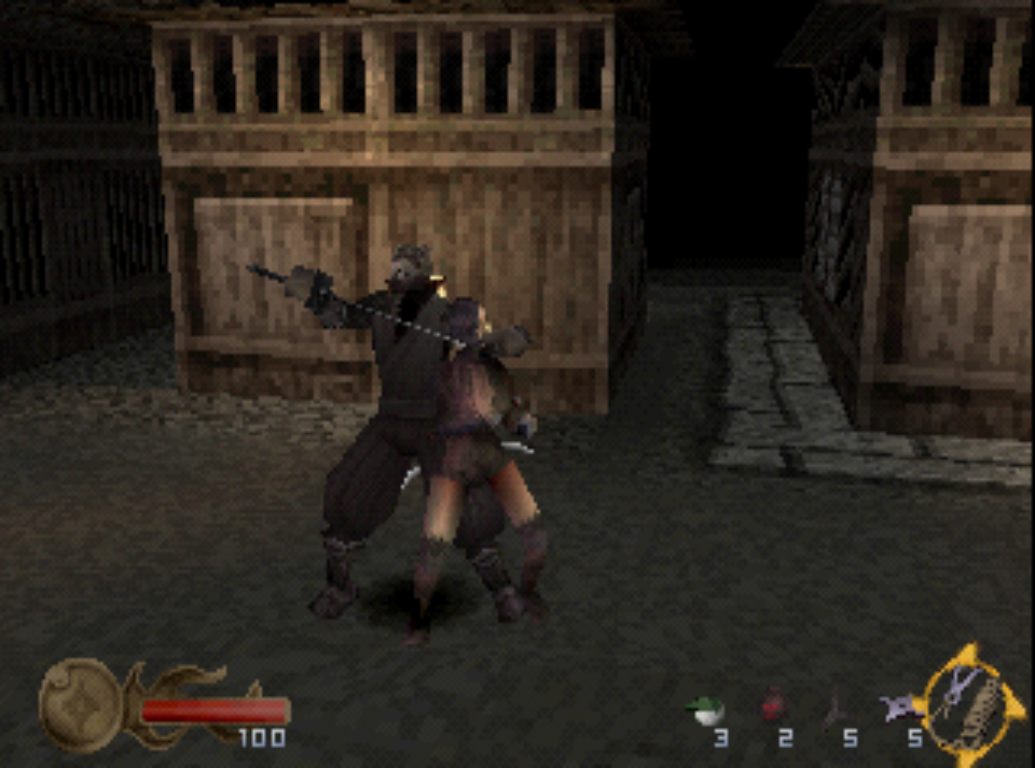 And of course your trusty sword

Thankfully, missions come in different varieties, from assassinations to escapes. In some missions, you are forced to engage in a cut-throat boss battle or two, and that would expose the limited combat system if it was more frequent, but works just right with this frequency. It showcases battles as vicious and deadly struggles, and that works with the Kurosawa influence.

Since each location is unique and somewhat memorable, it helps in replaying the levels to get better and better scores, and the variety of tools you can use may help you achieve better results. So, while your preparation the first time is hampered by the game's engine, you can always prepare for better runs through the same level.

"In the name of Azuma Ninja clan, I fully accept your challenge"

Being an early 3D game with an attempt at "realistic" designs, Tenchu obviously suffers more than its peers regarding how its graphics aged, especially when you also consider the limited draw distance it had to work with.

Yet, through those limitations, the characters worked well if you didn't focus on their low-resolution faces, and the environments were expertly crafted. Rose petals and snowflakes adorned the castle walls, and you could imagine a much more beautiful world behind those blocky graphics.

It's not a pretty game, and its graphics have not aged gracefully, but the expertise behind them still manages to salvage some visual splendor. 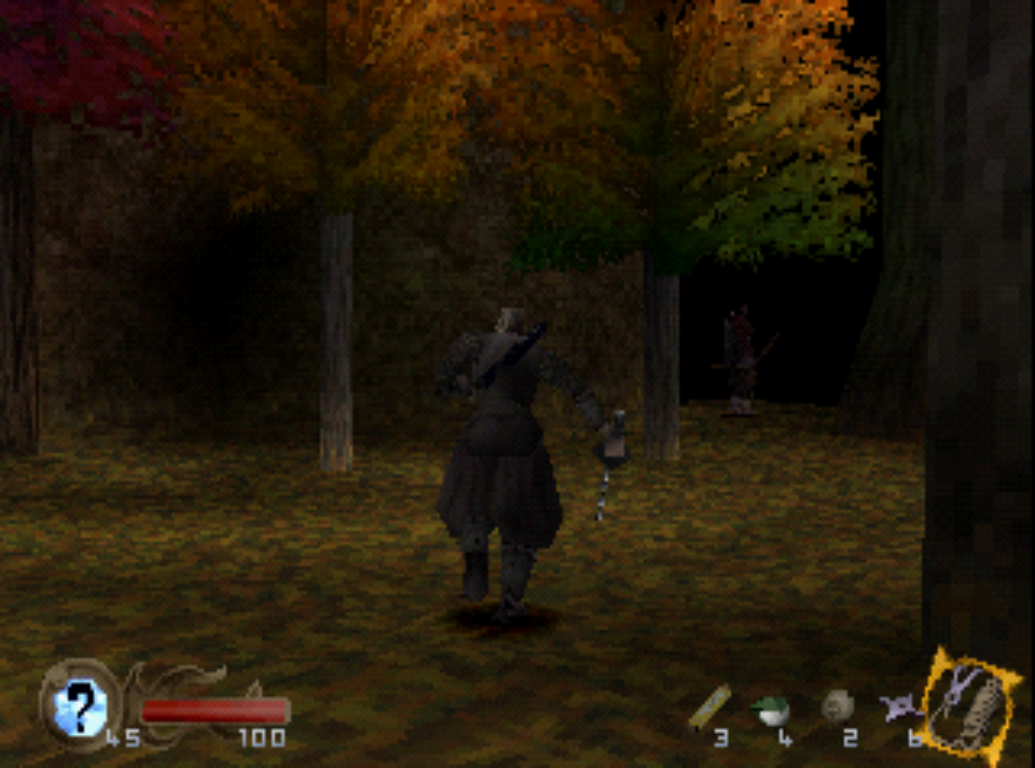 Something that didn't need any sort of salvaging is the excellent soundtrack of the game, composed by Noriyuki Asakura of Rurouni Kenshin fame, it's both a unique and utterly sublime score. Each and every track oozes personality from top to bottom, with movement stealthily shifting before going into unexpected melodic attacks.

Seriously, from the opening track, "Addua" with its African lyrics, you realize you are in for some amazing sounds. This is soon confirmed with each track in the game, with "Execute the Corrupt Minister" and "Cure the Princess" being personal favorites.

Unfortunately, the same level of care wasn't afforded to the voice acting, which inexplicably jumps from Western accents for main characters to Asian accents for villains at the drop of a hat.

There is no doubt in my mind that Tenchu was a great game in its time. It was a unique and revolutionary step forward for 3D gaming and its own genre, and it worked really well considering the limitations of the time. Yet, due to its pioneering nature, the advances made to its formula are more apparent and render it less fun as a result.

Yet, we can still appreciate it for its historical importance, and an honestly sublime soundtrack. 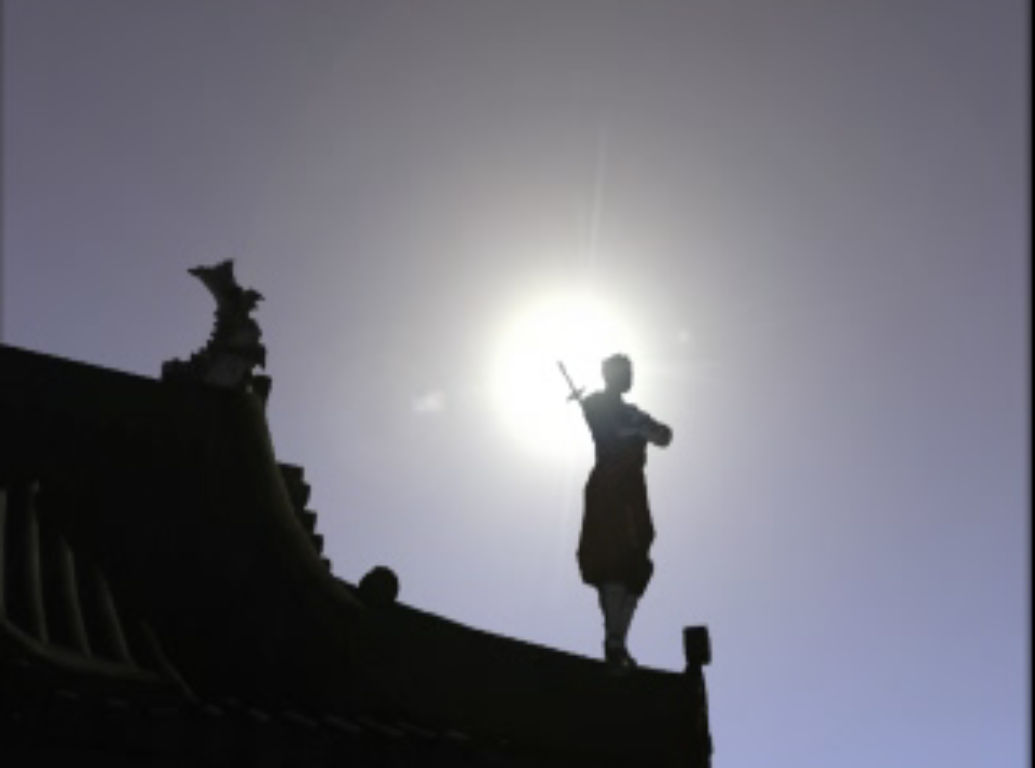 1-Use your grappling hook well.
2-Shurikens are the best way to deal with dogs.
3-Poison rice balls can be used both to incapacitate enemies and lure them into places.
4-Sneaking also means running to guard and slashing them from the back.
5-It also means jumping and slashing from above.
6-For multiple walkthroughs, try and remember where the guards and objectives are. The included map (select button) is mostly useless. 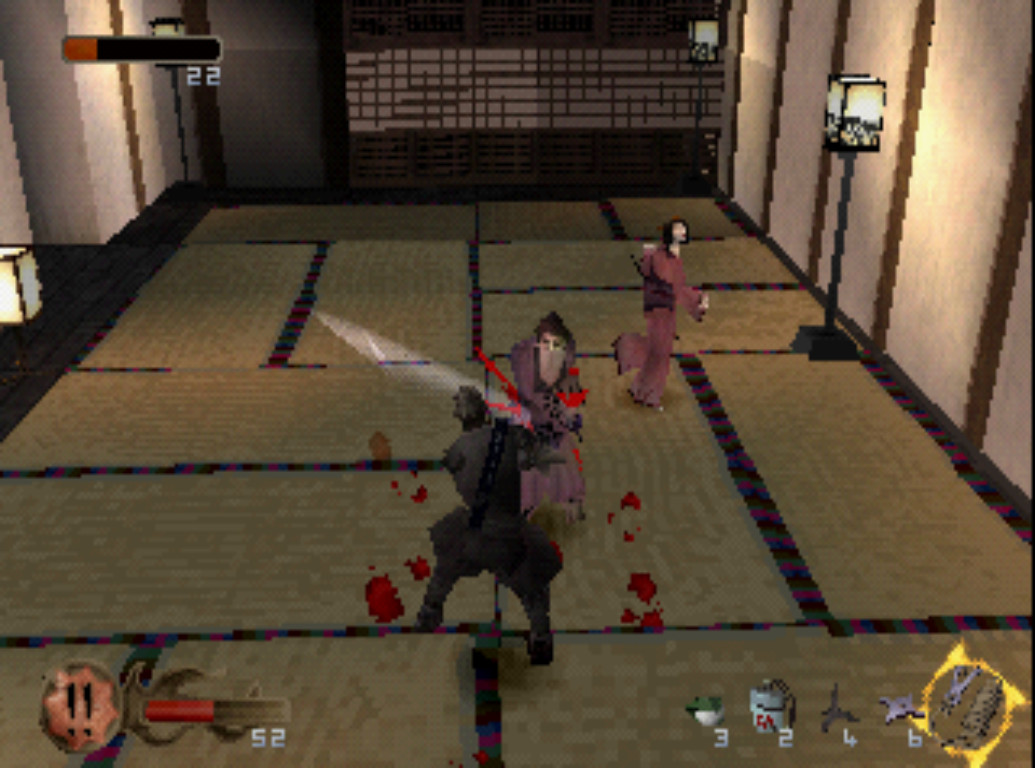 Boss battles may be an antithesis to the rest of the game, but they aren't soo bad 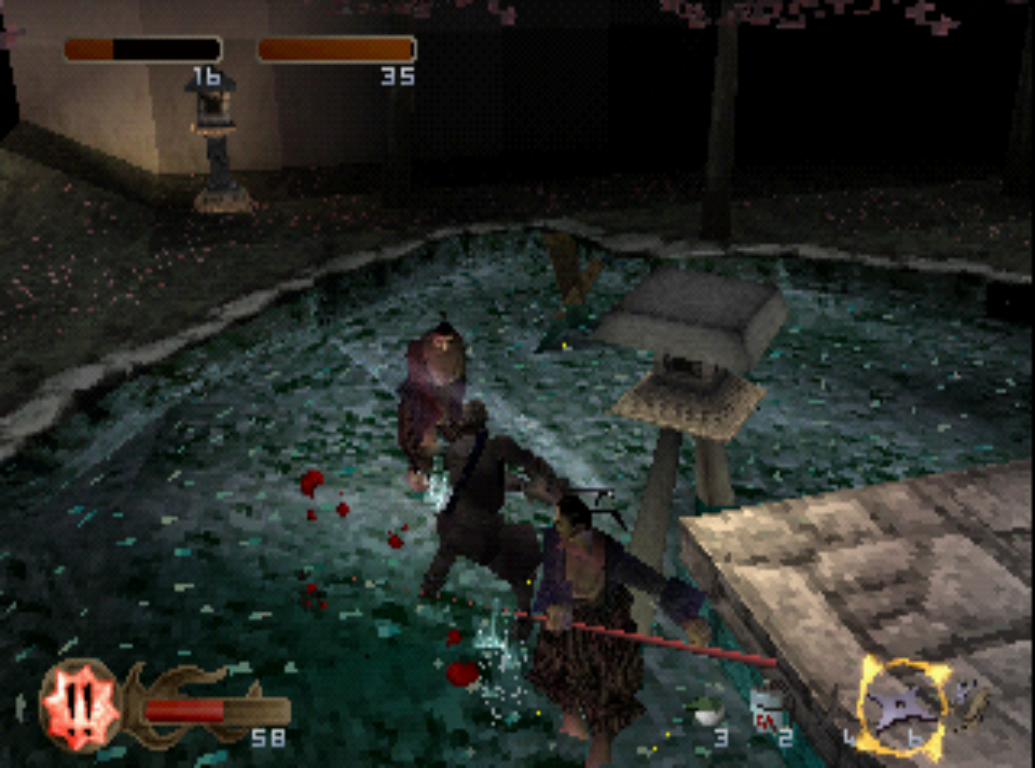 IF you find yourself fighting multiple enemies, you are playing the game wrong

I have always been a fan of the Tenchu games despite being a causal observer and never finishing any of them. As such, I expected to like the first game in the series even if I expected it didn't age practically gracefully. However, I had no idea it had such a unique and great soundtrack.

Now, I am hoping that the second game in the series resolved some of the issues of the first as wells as hoping for some other excellent soundtrack.