Spider-Man may be exclusive, but Black Cat and Mary Jane aren't Sony fans

This is one for only the biggest the pedants and nerds

Marvel's Spider-Man, first released for the Sony PlayStation 4 in 2018 and remastered for the PlayStation 5 in 2020, is a great-looking game. The sheer amount of detail in such a large and nearly-seamless open world is staggering, especially in the character models. However, being the gigantic nerd that I am, there was one model which caught my eye more than any other: the cameras used by Mary Jane and rigged around the city by Felicia Hardy, a.k.a. Black Cat. 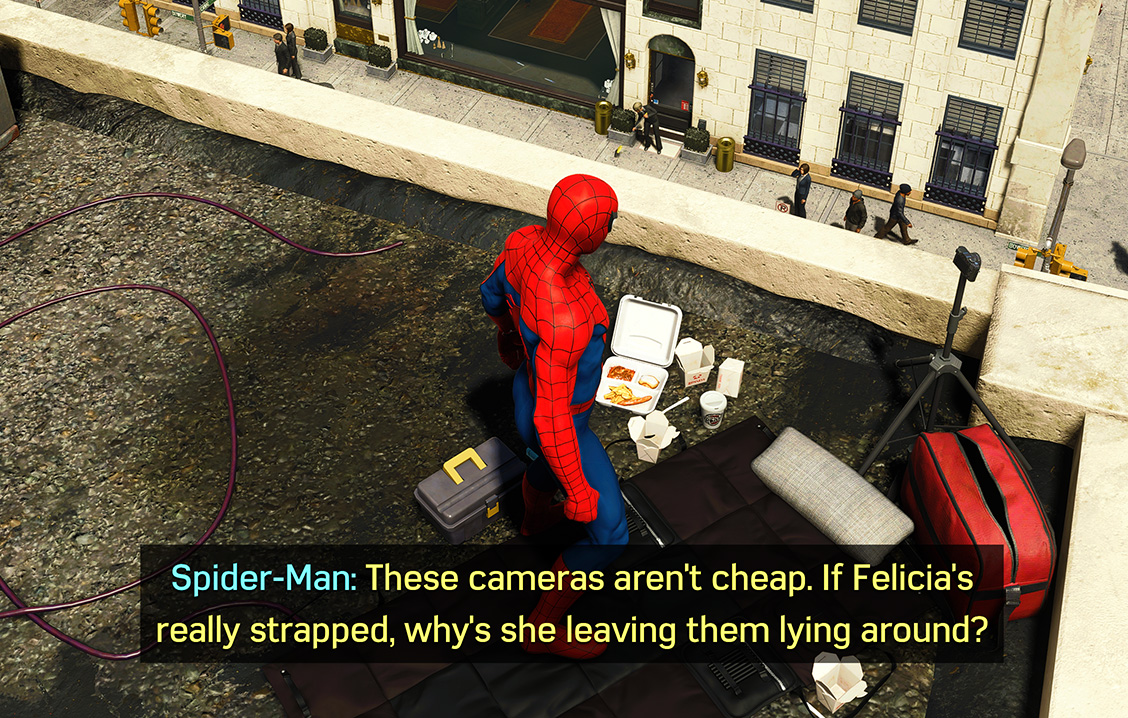 There's no real reason for this model to be as detailed as it is. At no point during the course of the story or normal gameplay is it ever seen for more than a second, and never up close. It can only be inspected by a player shifting into photo mode and using the free camera to move around, and zoom in on, the environment. But because I'm that nerd, zooming in is exactly what I did. Most objects in 'photo realistic' games are based on scans of real-world objects, and I had to know what camera it was based on. Had Insomniac included some Sony product placement? Or were Mary Jane and Black Cat breaking rank and shooting with the enemy?

This is about to get real nerdy. You have been warned.

I was expecting this Sony-exclusive video game, starring a character largely controlled by Sony, and made by a Sony-owned studio, to feature a Sony camera such as the popular Alpha series. However, it turns out this is in fact a Panasonic camera, specifically an LX100.

The biggest giveaway is the top view of the camera, showing us both the main controls and important lens details. 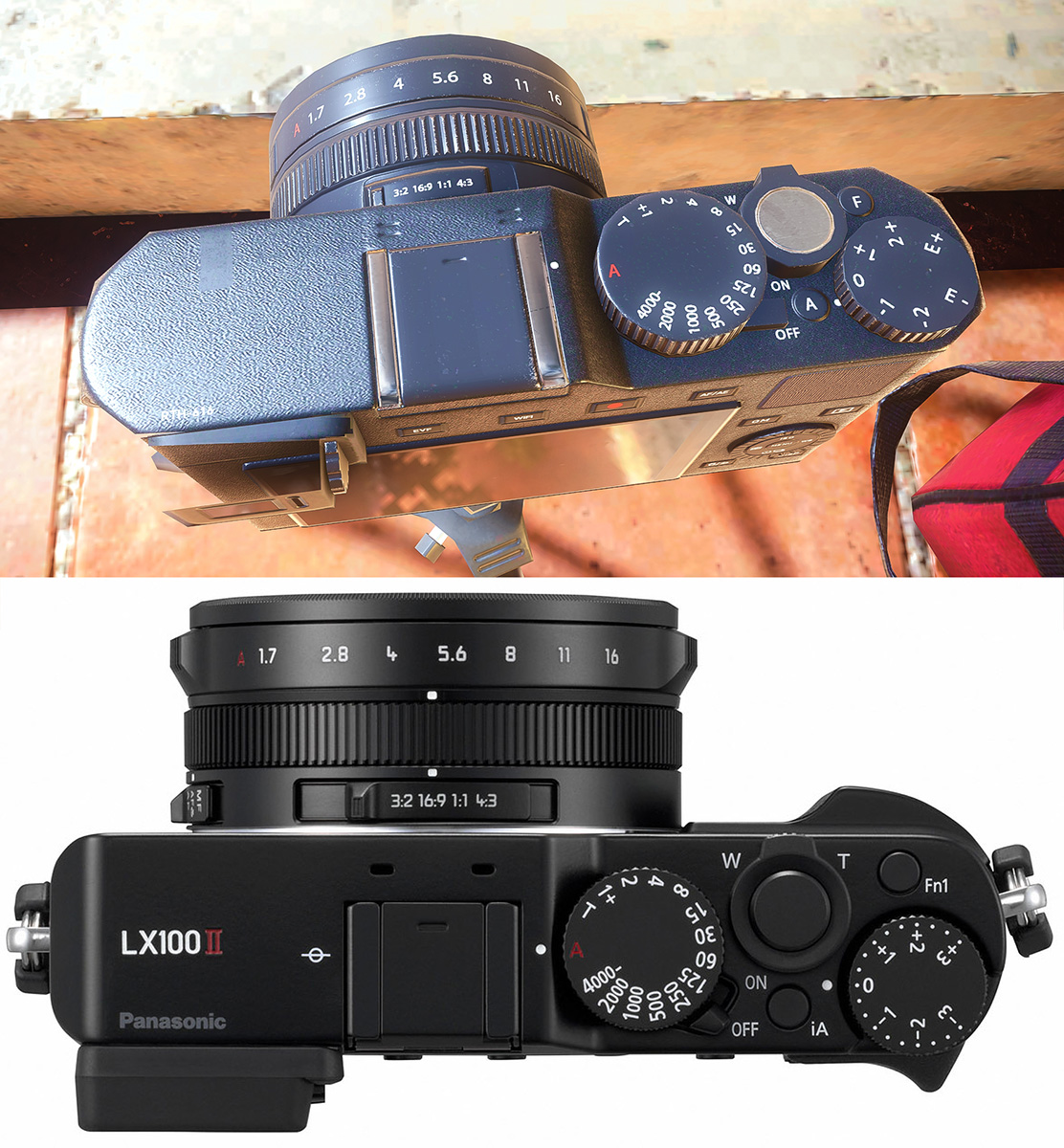 If we look at the lens portion first, we see that the aperture ring carries all the same markings, just using a different font. Behind that we see the manual focus ring with an identical texture, followed by the very unique aspect ratio control, which in-game is interestingly fixed at the 4:3 position.
Moving to the fundamental controls, we see the shutter dial is marked identically with the exception of the Panasonic's "1+" being flipped to "+1" in the game. The shutter button has been repainted silver, but the position and the surrounding zoom control are untouched. The general-purpose function button and 'Intelligent Auto' buttons have had their adjacent labels moved on top of the buttons themselves, the third-stop markings on the exposure compensation dial have been removed, and the full stop markings have had their font changed and changed orientation, but all the positions and functions of these controls are the same. We also see matching recesses in the hot shoe cover, and similar rectangular dimples in front of the hot shoe.

Moving to the rear of the camera, we see a similar degree of token adjustments. 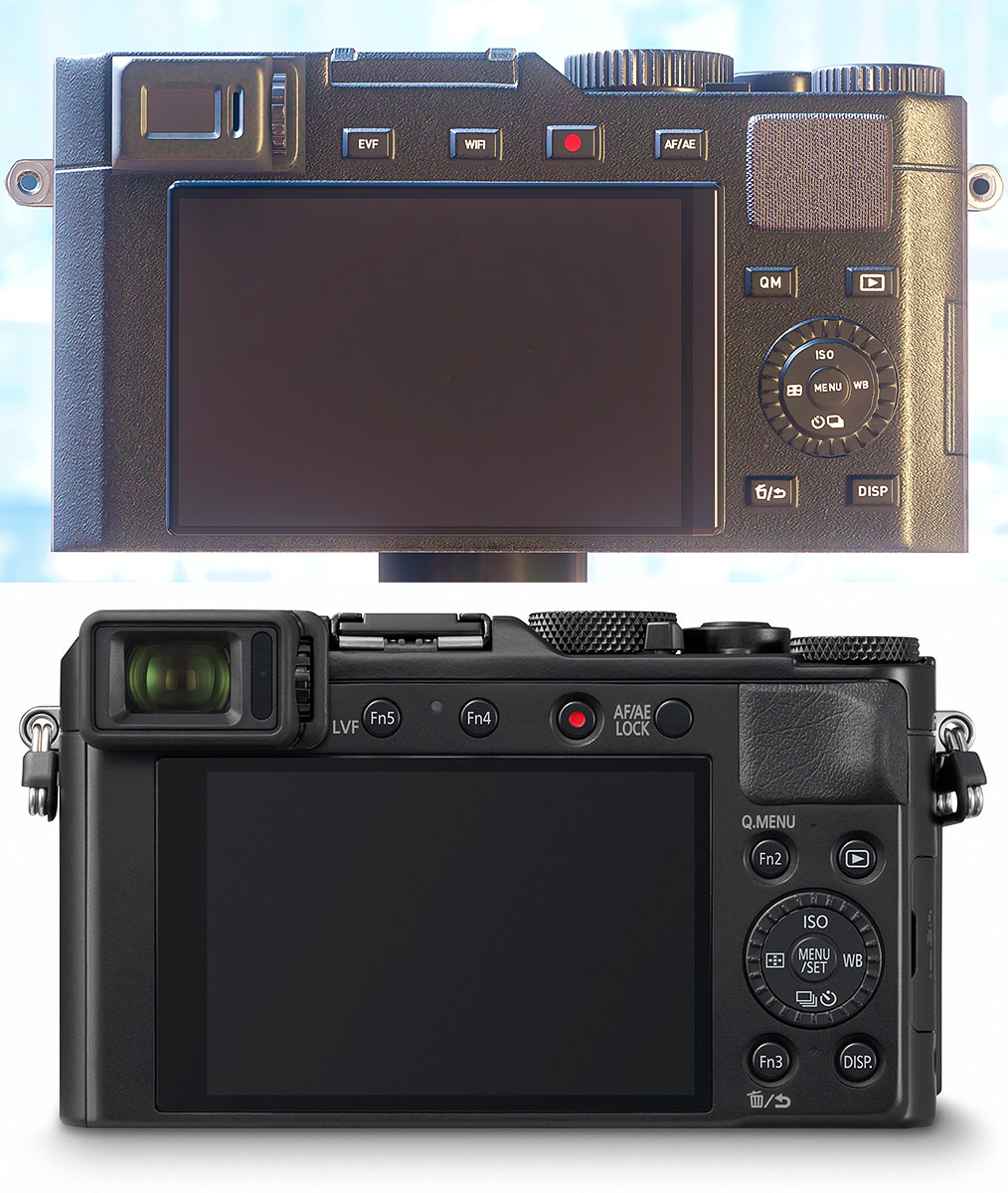 Round buttons have been replaced by rectangular ones and, like the top panel, some buttons have had their adjacent labels reprinted on top of the buttons themselves on the game version, but otherwise this is shockingly identical. The biggest departure in design is the thumb grip, which has been flattened out, presumably to save a few polygons. Similarly the general curves of the camera have mostly been simplified and become more angular, but are still there in essence. The diopeter adjustment wheel and eye sensor of the viewfinder are both there in their original positions.

On the right side of the cameras, we can see a matching access door, with the side panel secured in an identical fashion with two screws. 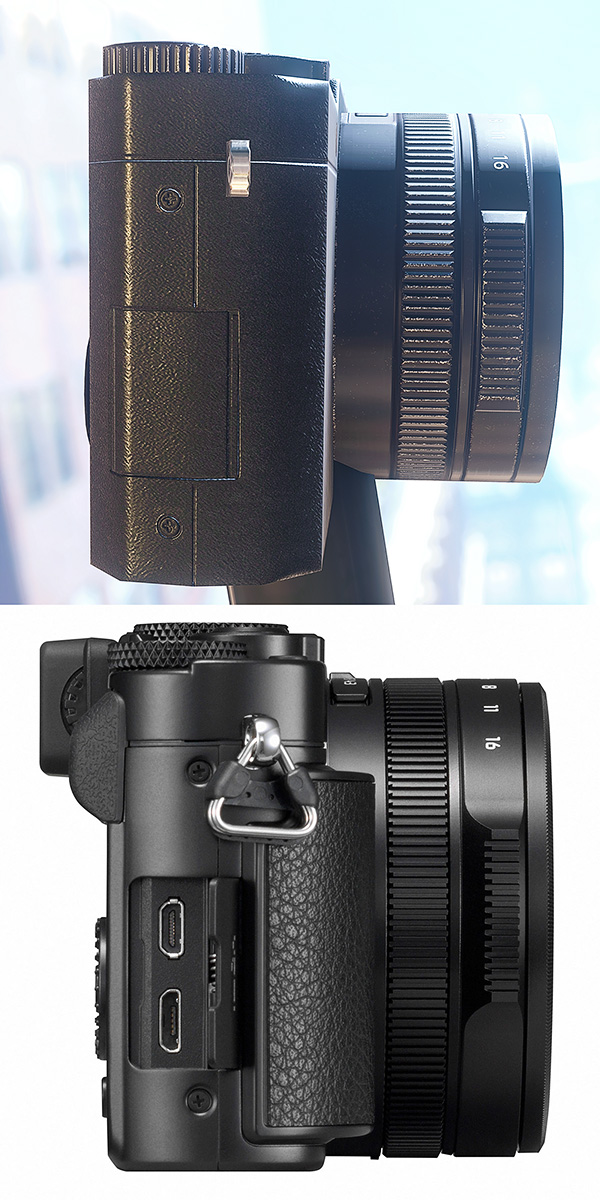 From the side we can also very clearly see the aperture ring's grip tabs, which in the game model have been flattened out but still exist as part of the 2D texture.

On the other side we can see the focus mode switch, which is unchanged other than the orientation of the text and macro symbol. Interestingly the game model seems to be set to the middle setting, for macro photography. Again the aperture ring's tab is clearly in the texture, even though the model is smooth in that area. We never see the lens extend within the game, though the game model's lens does match the form factor of the real lens when retracted into the wide-angle position. 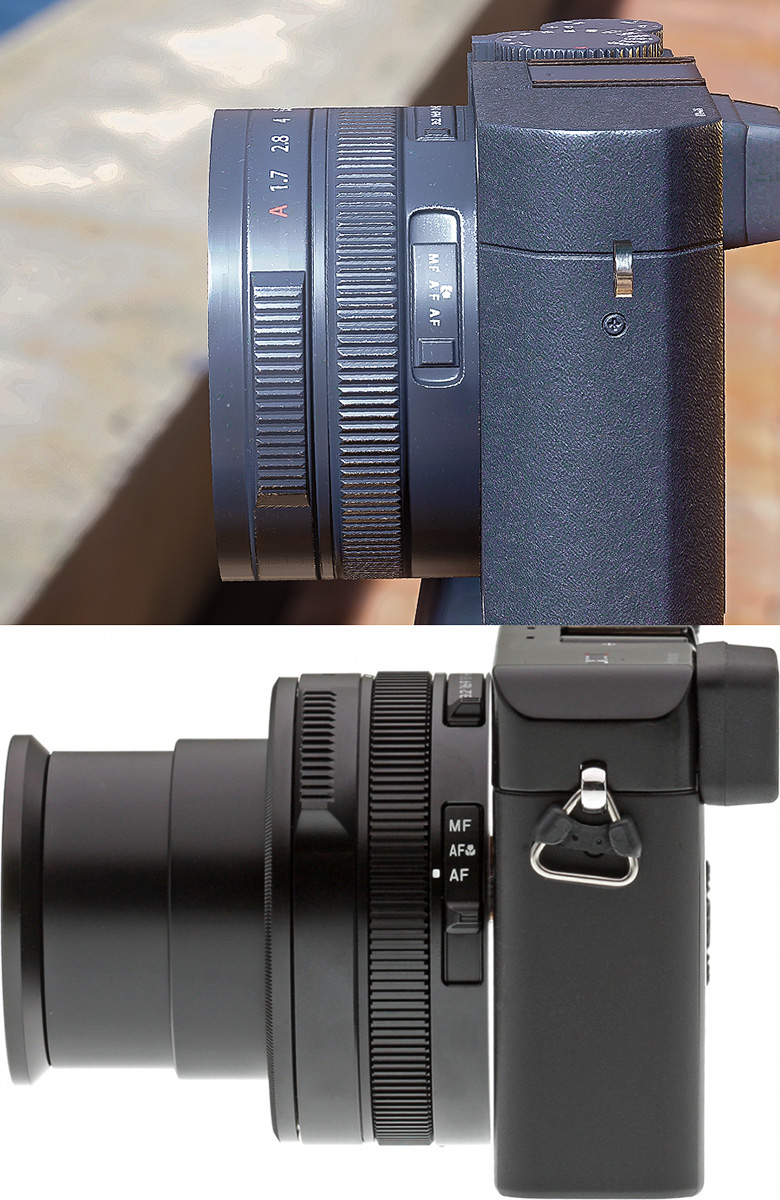 However, it appears Insomniac did not simply scan a Panasonic LX100 to make their camera model. There is one very significant deviation which suggests they were at least a little mindful of their position as a Sony-owned studio making a Sony-exclusive game.

Looking at the front of the lens, we find details which are completely at odds with the rest of the model and do not fit the Panasonic specification. 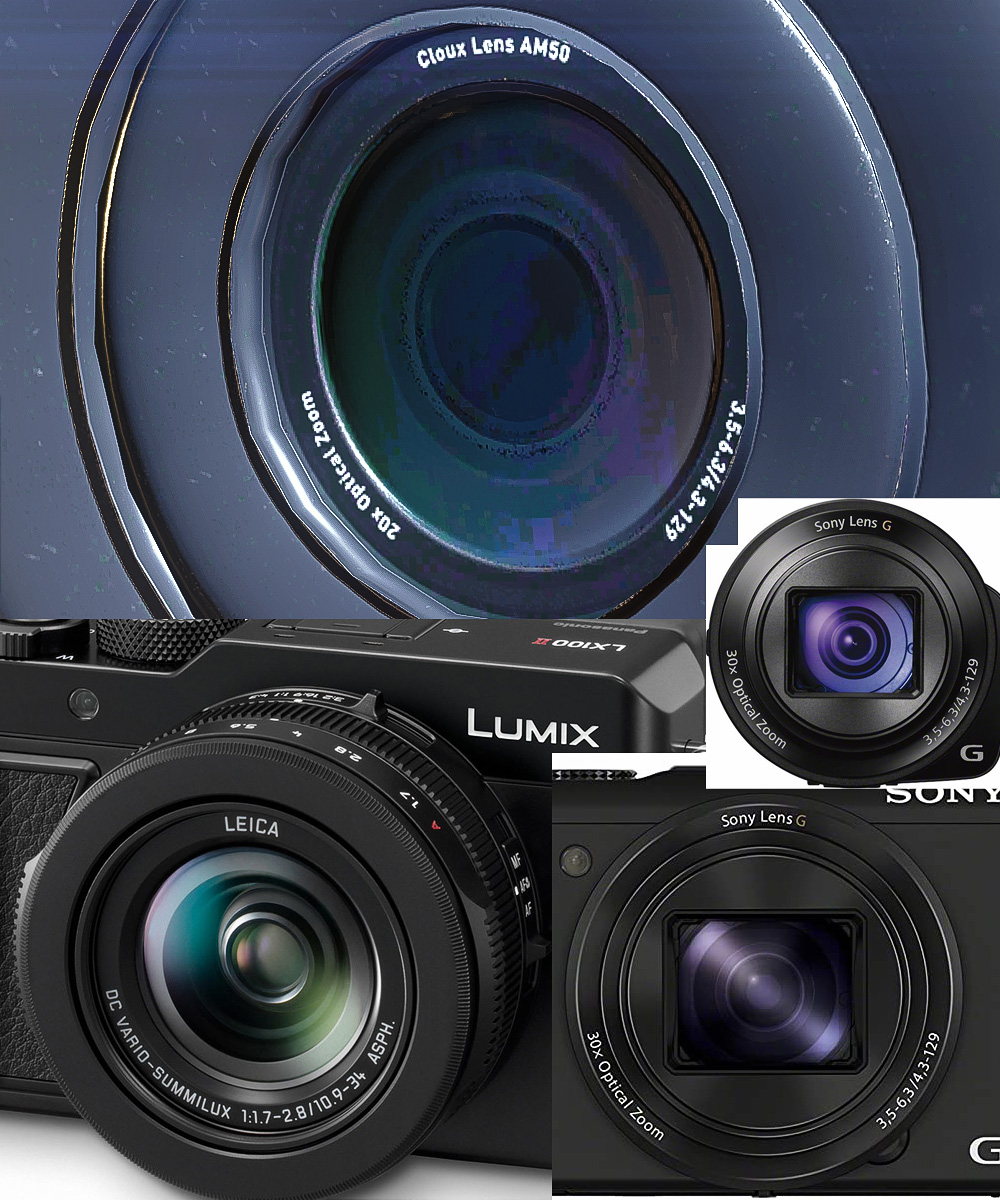 While the Panasonic camera has a 10.9-34mm f/1.7-2.8 lens, which the markings on top of the game model's aperture ring do match, the front of the game model's lens states it has a 4.3-129mm f/3.5-6.3 lens, which is an identical specification to the lens found in the Sony HX50 compact camera. (This lens arrangement was also reused for the QX30, a camera attachement for mobile phones.) The "[Manufacturer] Lens [Model]" label at the top also matches Sony's design, as does the optical zoom label. Of course this specification contradicts the f/1.7-marked aperture control, and 4.3-129mm is indeed a 30x optical zoom and not 20x as the game model claims, but it's still clear where the game model tooks its 'inspiration' from.

The camera model in-game is the AM50, which does match Sony's compact camera designation system of two letters followed by a number in multiples of ten. So the front of the lens has indeed been lifted from Sony, though the rest of the camera is very unmistakably Panasonic's.

I do find it interesting that all photographic equipment within the game is attributed to the fictional brand 'Cloux', too. Again, I would have expected it to be Sony-branded material all the way through; they've certainly always insisted on having their brand visible in every film.

As to Spidey's suggestion that these "aren't cheap", with a 2018 price tag of £599 the LX100 certainly was not an item the average person on the street would buy in bulk and abandon, but for a master thief like Black Cat they would not be that extravagant. As the camera was four years old in 2018, many could be found second hand at a lower price, and Felicia would likely have no problem leaving them around the city as their diminished resale value wouldn't appeal to her.
That Mary Jane uses such an affordable, consumer compact camera for her job as a reporter for the Daily Bugle is more puzzling. This is not the sort of camera a publication would supply to its staff, and even J. Jonah Jameson isn't quite cheap enough to make reporters buy their own equipment.

Still, there you have it. Sony may own the studio, the platform and have the lead character's licensing, but the girl-next-door and definitely-not-Catwoman both shoot with Panasonic.

On a less frivolous note, however, this is a testament to the absurd level of detail we have in our video games now. Most people acknowledge that graphics have progressed well beyond what we ever dreamed of just a couple of hardware generations ago, but I don't often see people appreciate exactly how far game developers go to realise their games' worlds smallest details. This camera model could have simply been a black rectangle and, in all but a couple of Mary Jane's scenes, it wouldn't have made a difference to most players. When we think of immersive game worlds and graphics we typically think of nuanced facial animations, cloth physics, draw distances stretching to the furthest horizon, and fancy reflections. Rarely do we celebrate the advancements made in the details of a camera, a watch, or a sandwich. As needless as this level of detail is, I, for one, appreciate it. I shouldn't be able to zoom in on a small, irrelevant prop, and identify what real-world item was scanned in to create it. But I can. Games can now allow us to inspect the finest details, details so small they are utterly invisible during the course of regular gameplay, which exist for no other reason than simply because it's now often easier and cheaper for a developer to create intricate models and high-resolution textures from modern scanning than it ever was for them to create a comparatively simple item from scratch in the past. And I find that quite incredible. Modern graphics absolutely spoil us, and we don't even see it most of the time.

So next time you see a camera, or a television remote, or a spoon in a video game, take a moment to hop into photo mode and see how deep you can dive into that silly, pointless object.

I first heard of Destructoid in late 2006 and I've been lurking on Dtoid since 2007.
Due to my unfortunate habit of talking and writing far, far too much and losing track of why I started in the first place, I tend to stay clear of the C-blogs for fear of finding myself up at 4am writing a three-page essay on Legend Of Dragoon, but I'll probably write the occasional rant, to everyone's dismay.

Quick shout out and mention for Love 146, a fantastic charity dealing with a very tough subject. Give them a click, listen to their story and please support them if you can.