I've been a lot slower this time around because I have much less time to play compared to before. I alternated mostly between Monk, Scholar, and Summoner for the main story. Once again, since this is an expansion to a long running MMO, I'm primarily going to focus on the changes.

The game's story is divided into three distinct parts. The first part deals with Fandaniel and the remnants of the Garlean Empire. Fandaniel reveals that he is actually Amon, the same Amon from the Crystal Tower, who was bestowed with the memories and knowledge of Fandaniel when he became an Ascian. After failing to free Zodiark, he heads to the moon and merges with Zodiark, revealing his plan to kill Zodiark and continue the Final Days, which he does. A deus ex machina phone call brings an end to the conflict between the Eorzeans and Garleans despit the Garleans choosing death over receiving aid from Eorzeans.

With the Final Days underway, the big twist comes when they are lost and you seek the sealed Elidibus in the Crystal Tower for help where he sends you back in time in a incorporeal form. But luckily, you run into two familiar looking members of Convocation of Thirteen (read Organization XIII), Emet Selch and Hythlodaeus (all I can see is Ansem and Marluxia, it can't be just me right?), who recognize you as Azem's familiar and decide to help you out. It turns out that Hermes's creation, Meteoin, is the one responsible for the Final Days. Too bad everything you learn here is made pointless due to a mind wipe and only Venat remembers the events despite Emet Selch and Hythlodaeus being informed that there was another with Venat. A SECOND deus ex machina?!? 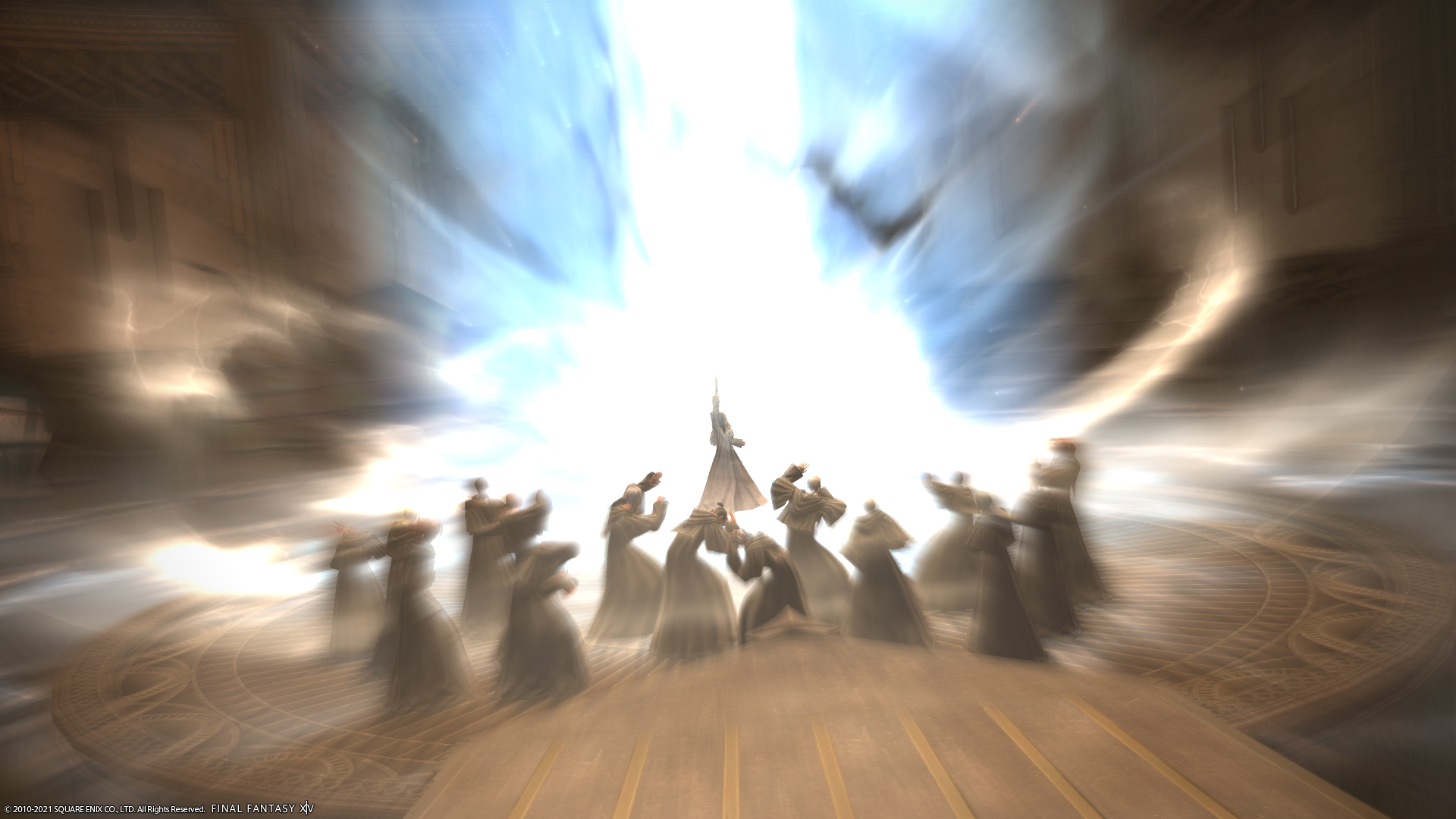 This leads to a confrontation with Hydaelyn, who fights against the Warrior of Light and the Scions in an attempt to see whether they have mastered the energies of dynamis and are able to confront Meteoin. Defeating Hydaelyn causes her to fade away though she imbues power into Azem's Crystal. Somehow, the worlds remain sundered. A crystal left by Hydaelyn gives the Scions the ability to travel to Meteoin at Ultima Thule, where they learn of some of the different species that have given up on life, such as the dragons of Ishgard. It inevitably leads to the confrontation with Meteoin at the end of Ultima Thule. After the Scions are defeated, who else but Zenos shows up in his Shinryu for the final cameo to save the day. After the final trial against the Endsinger, there is one more duel with Zenos and a THIRD deus ex machina that literally falls in from the sky.

Towards the end of the story, they desperately try to bring closure to every character in the story whether they are long dead like Moenbryda, characters who got focus this time like Urianger, or Thancred, who is just there. It feels like they are trying to bring some kind of closure to every character no matter how minor they are. They are just trying to do too much and it is clear that a lot either got cut or condensed to make it fit as they rush to close up the lore that they have developed for the last decade. The music definitely helps to sell the story. Some characters are even relegated to the role quests. The result is that it feels kind of messy like Heavensward did where you have several fragmented stories each with their emotional weight. Individually, they are great, but bring them together and it feels much weaker. 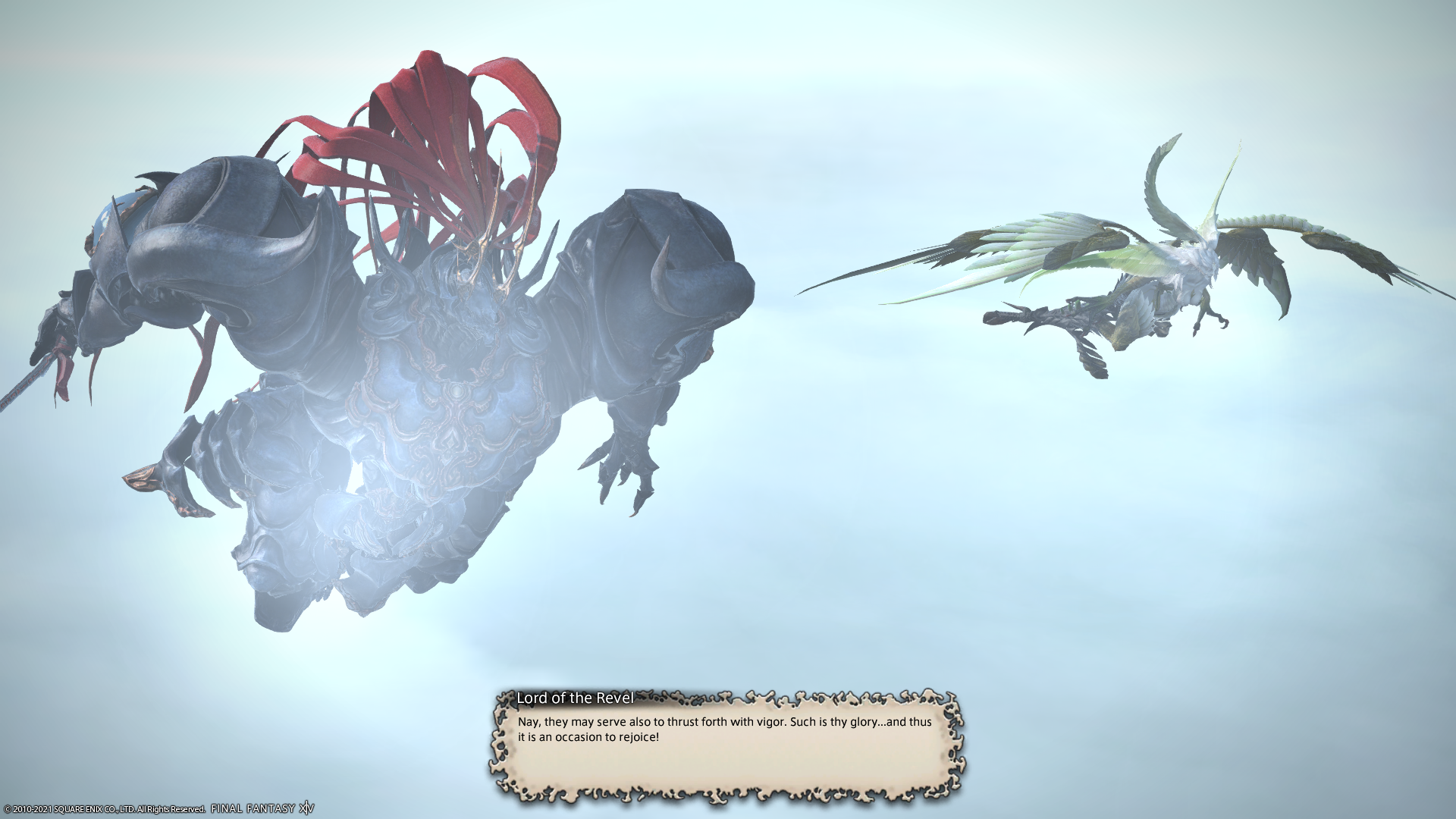 You can really tell the difference in the latter parts of the game. The character models may not be impressive, but the background effects on the stages are absolutely amazing compared to the previous games. There are tons of things going on in the background that were once rarities in the game. You also have plenty of flashy effects compared to the previous expansions thanks to ending support for the PS3. 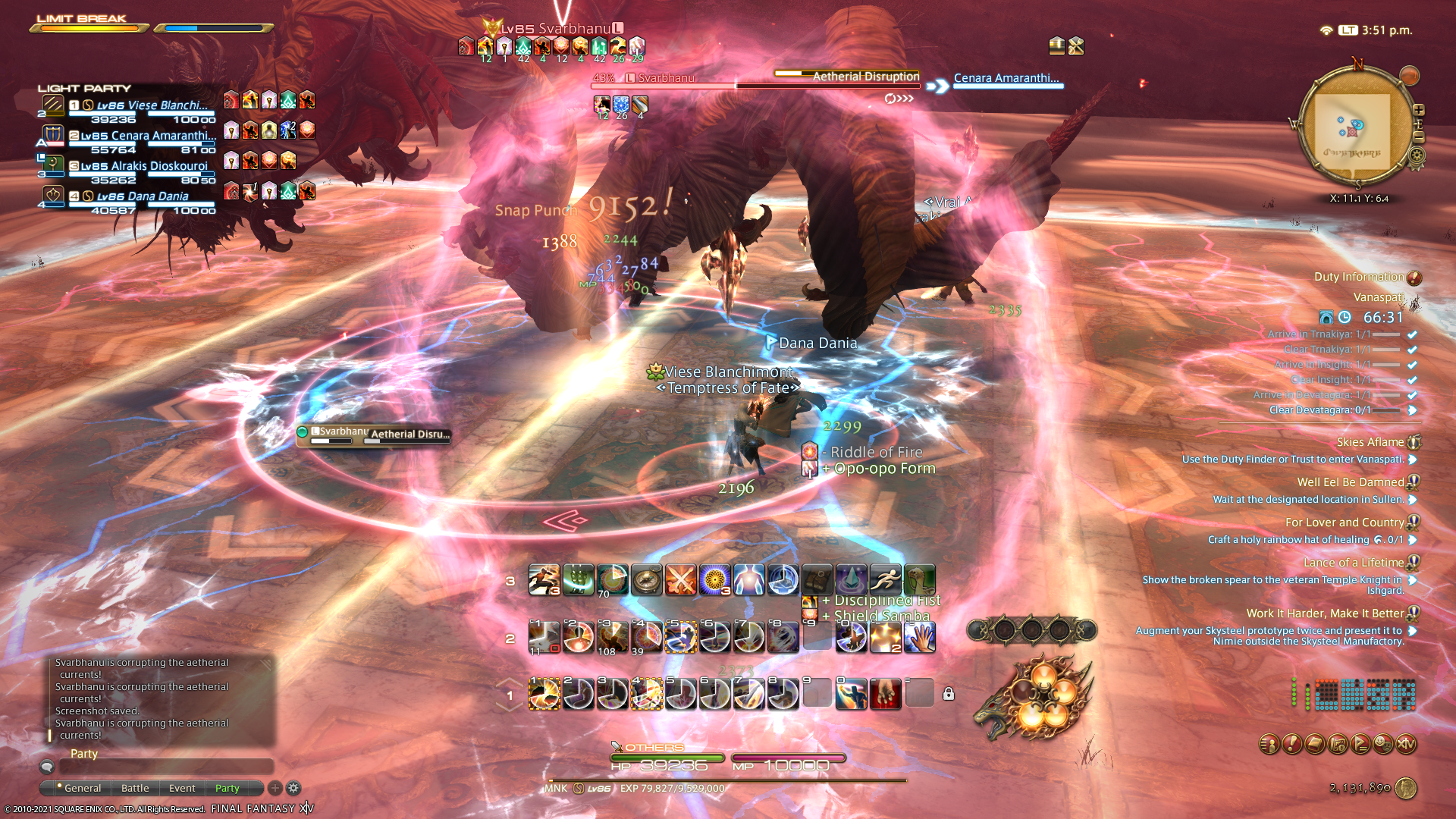 In terms of classes, the best way to describe them is streamlined. In Shadowbringers, you had a lot of powerful skills and abilities that were tied to specific cooldowns and you had to be under a specific buff to use them. In Endwalker, this is gone. You can simply just meet the conditions and just shoot the skill off without the need for that specific buff. For example, Summoners used to need Dreadwyrm Trances for Demi-Bahamut and then Demi-Phoenix the next time around. But now, you pretty much just alternate between Bahamut and Phoenix. Ifrit, Titan, Garuda can be used at any point inbetween and you can also choose to skip them. Monks no longer have Greased Lightning and have improved chakras as well as Perfect Balance being used to trigger a three hit combo that ends with a powerful finisher. Two different finishers together and you get an even more powerful third finisher.

The downside to streamlining a lot of the classes though is that there aren't many new skills. Most skills are buffs to pre-existing skills, such as greater damage/healing or lowered cooldowns. The result of this is that you don't feel like you're getting much with each level despite the fact that you have those buffs to other skills. Because of this, the classes with more visual improvements, such as Summoner, who gets two upgrades to their summons over the course of this expansion, feels like they got far more than other classes.

This time around, there are a lot more solo duties and even one of the trials allows you to go in with a trust. These solo duties are sadly mostly stealth and NPCs following you around. The ones where you have to secretly follow an NPC are luckily not instanced, so they are able to avoid the Raubahn incident. The ones where NPCs follow you around gives you a few bonus conversations, which is nice in helping flesh out the characters. You also get to play as different members of the Scions at several points as well as an unnamed Garlean at one point. And when the objective isn't really clear either, which creates a bit of frustration because of how limited you are in your options when playing stealth. Luckily, the field of vision for enemies is terrible compared to NPCs.

The music that accompanies the story is absolutely amazing. Each major boss has its own accompanying theme and you can hear some of your favorites from even A Realm Reborn as it is reused for one of the bosses later on. These songs help sell the story and gameplay far better than they have in the past, so even though the overall story has issues, you will still feel for the characters. That is how good it is. 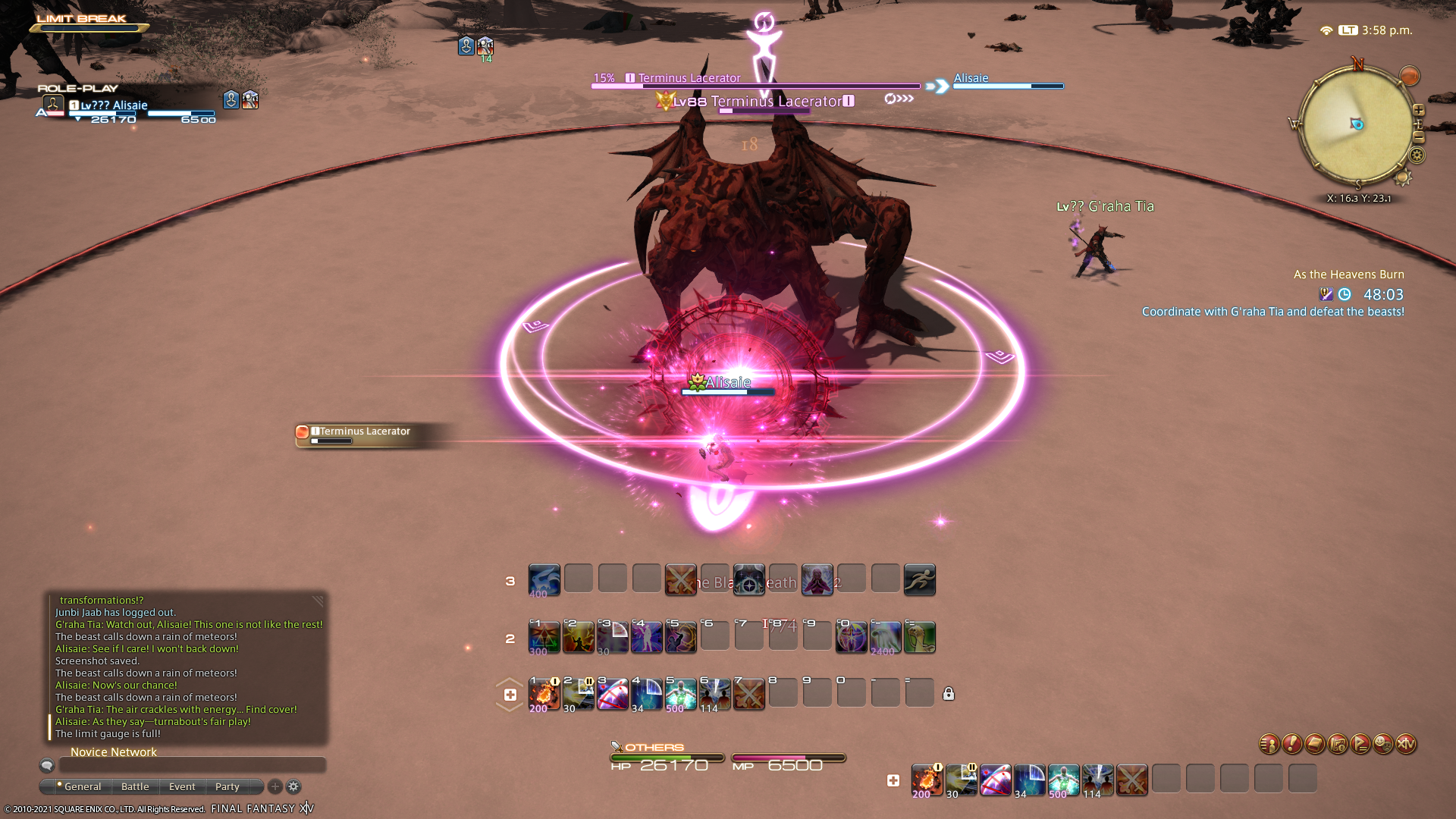 The other big change is the "number crunch" where they made the numbers smaller. You really feel this towards the end of a given expansion's content as the power differential between you and the enemies are much smaller than they were previously. So if you are trying to unlock or do something like the Unending Coil of Bahamut, it is a bit harder than it was previously. However, if you choose to go into content unsynced, you can get a powerful echo buff that renders that point moot in case you want to try to solo something still.

Once again, I do have to complain about the attack indicators. About halfway through the game, they start up with their shenanigans of hiding attack indicators again. And towards the end of the game, they created some new indicators for old mechanics, such as when a boss attacks half of the arena. So, here we are again, repeating one of the problems of Shadowbringers. At this point, you really need to turn off effects of other players to be able to see what's going on and even then, that could be a problem with how flashy some of the effects are. They really should be using Extreme or Alliance Raids to do this to help bridge the gap between normal and harder content instead of the story content.

Oh and only dungeon bosses give experience now. Normal mobs do not. The level 50, 60, 70, and 80 dungeons give noticeable experience, but it also feels lower overall to me. It just does not feel as good as getting experience with each mob and watching the bar go up.

While it is a grand epic story, there definitely feels like there is a lack of focus. They are trying to do too much, far more than other expansions which already struggled with their split stories. While each of them is brought to a conclusion, some feel very forced in at the last minute as they quickly tried to wrap everything up. The dungeon design and combat is better than any of the previous games due to the streamlining of skills. However, boss mechanics are still all over the place with no signs of streamlining that in sight.

I studied to be a teacher, but I only have a tutoring job right now that has very few hours. When I'm not busy, I'm trying out random games that get my interest and writing reviews about them. Keep in mind that these reviews are based on my own opinion and what I think about the game. I generally dislike F2P features that exclude players by making the top items only obtainable with real money or are absurdly expensive and P2P games that limit a player's ability to play with something like fatigue or stamina systems. I also tend to be late with reviews as I only purchase games when I have the time to actually play them.