We Are Entering the Golden Age of Platform Fighters

I guarantee that all of you reading this right now have played at least one platform fighting game, or have at the very least seen someone else playing it at a party or something. I am, of course, talking about Super Smash Bros, the progenitor of the genre and, in the eyes of many, the uncontested best it has to offer. As far as offering a replayable couch multiplayer experience, there’s practically nothing out there that’ll keep you and your friends as busy for as long, and in terms of pure scope and production value, Smash is certainly king with its towering and iconic roster which has made it practically a household name. However, Smash’s status as a titan among games belies the reputation of platform fighters as a subgenre.

Indeed, platform fighters have barely been recognized as a game genre at all, with many preferring to use the semi-derogatory term “Smash clones” to describe them. In recent years, people have started to recognize platform fighters as their own genre and not solely derivative of one game, and that’s great, but unfortunately, a woeful number of gamers still insist on referring to them purely in reference to Smash. (That is, of course, ignoring that a good number of the games on this list aren’t even platform fighters at all.) Thus I feel compelled to draw attention to some of the best and most unique platform fighters out there, and hopefully convince someone to reach out a bit into the wonderful world of platform fighters. When most people think of an indie alternative to Smash, usually the first game to pop into their heads is Rivals of Aether. Contrary to its reputation as “store-brand Smash Bros.”, Rivals is easily my favorite platform fighter to the point that I feel it even outdoes Smash itself in a lot of ways. The game’s perhaps lacking in casual appeal, with a dearth of singleplayer content and a much smaller character roster and stage list, but in all other areas, the game far exceeds its chief inspiration, namely Super Smash Bros. Melee.

Melee is often lambasted by its opponents for being too technical and inaccessible to new players, with its notoriously tight input windows and requiring very specific hardware for anyone hoping to be remotely competitive in it. Rivals takes Melee’s “happy accident” competitive framework and perfects it; unlike later Smash games which took techniques like wavedashing and put one between their eyes, Rivals adopts them and refines them into intended, unique mechanics. Wavedashing in particular is much easier in Rivals than it is in Melee, to the point that anyone coming in from Smash can learn to do it with just a few minutes of practice. Other than that, there’s stuff like hitfalling, which is sort of a reimagining of Melee’s L-canceling mechanic, reworking it from a purely technical execution barrier into an easily understood and applied mechanic that rewards players for landing hits.

That’s not to say Rivals does nothing of its own, though; the ledge, a staple of Smash and the platform fighting genre, is completely absent from this game, instead giving each character a wall jump and the necessary tools they need to recover without it. This, in my opinion, makes both recovering and edgeguarding much more active and fun, since the offstage player can’t just touch the lip of the stage to get a lifetime supply of free invincibility. Rivals also axes the bubble shield mechanic from Smash, instead replacing it with a much better parry system which can stun other players and even reflect projectiles—which, combined with the freer range of movement in Rivals, inherently makes camping MUCH easier to deal with compared to Smash. Some might say this homogenizes defense, and I would kind of agree, but hey, the 3D followup to Rivals that’s been in the works for some time now has bubble shielding, too, so best of both worlds there. These techniques and mechanics exemplify exactly what I love about Rivals and other platform fighters like it; it pays homage to its inspiration, but doesn’t get tied down by it and ventures to do its own thing with the platform fighting genre. Nothing, not even Melee, plays like Rivals.

As far as characters, sure, Rivals does have less of them, and it may not have Mario and Pikachu in it (well, at least not officially), but this is more than made up for by how interesting and frankly awesome the characters themselves are. Wrastor is like an avian Jigglypuff that can boost its speed and use Smash attacks in the air. Ori & Sein are like if Pikachu and Captain Falcon had a baby (and that baby had a Luma). Kragg is like Steve before Steve, only as a heavyweight and a LOT less janky. And then there are characters that are entirely unlike anything we’ve seen in Smash like Elliana and Sylvanos. I could go on, really.

This is all to say nothing of the new workshop characters and stages that are planned to be added next year, or the numerous spinoff games like Dungeons of Aether and Creatures of Aether that are in development currently. If you’ve ever wanted to get into Rivals, but are worried that you missed the boat, rest assured that the game itself and the Aether IP as a whole are more alive than ever. 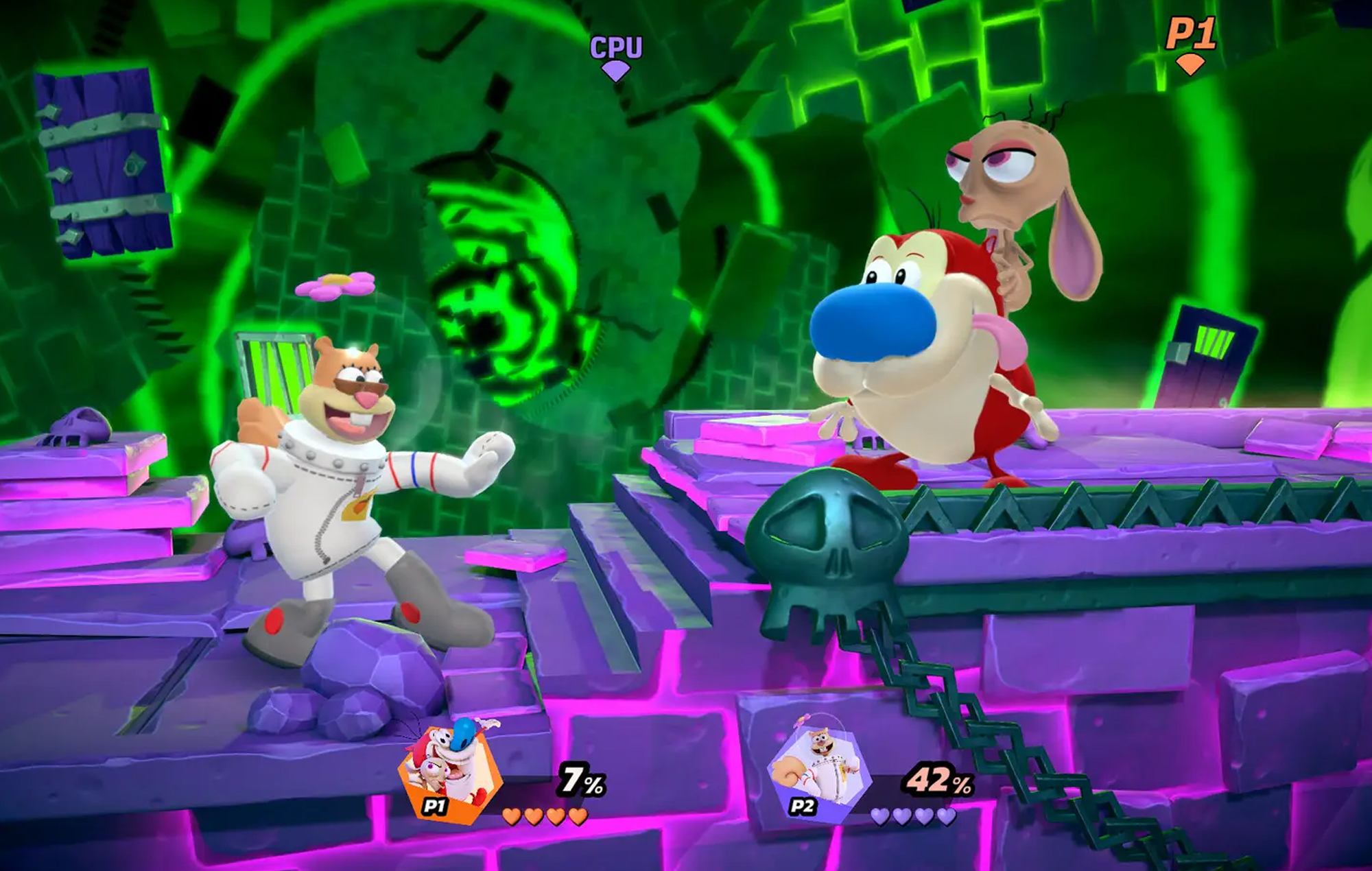 I couldn’t write a post about platform fighters in the year 2021 without bringing up Nickelodeon All-Star Brawl. This game was all the rage when it was first announced, and it launched last month to… middling reception. Yeah, critics aren’t loving NASB right now, and at a glance, it’s easy to see why. The game’s lacking in modes and side content, it launched with several infamous bugs (most of which have thankfully been patched out), the lack of voice acting puts some people off, etc.

Personally, though, I don’t really care about that. What I love about NASB (other than being able to school people as CatDog, anyway) is just how much different it does from any other game in the genre. NASB has, to name a few of its most unique mechanics: air grabs, airdashing, directional blocking, aerial strong attacks, and perhaps craziest of all, the ability to GRAB PROJECTILES. In some ways, NASB is more akin to an anime fighter than a platform fighter, which is kind of hilarious, but it still has all the wacky silliness you’d expect from both the genre and from a Nickelodeon game. And yes, you can even wavedash. THE FUNNY SPONGEBOB GAME HAS WAVEDASHING. Game of the Year.

To call NASB a perfect game would be an overstatement, and as much as I disagree with others calling this game (or any game) a “Smash killer,” I think Nickelodeon All-Star Brawl does a respectable job at standing on its own and not getting lost in an endless sea of licensed, uninspired Smash clones that came before. I remember a time not so long ago when something like NASB would’ve been blown off as cheap, licensed shovelware (not to say people aren’t doing that even in spite of the game’s successes), but the geniuses at Ludosity managed to make a game that’s not only goofy as hell, but also wholeheartedly unique. Some may not be thrilled with the game in its current state, but I, personally, have been having a blast with it and cannot wait to see how it looks in six months—the devs have already confirmed via the game’s Discord server that they’ll be adding alt costumes in a later patch, and without spoiling anything, we’ve got a bunch of other features and characters to look forward to as well, so stay tuned. 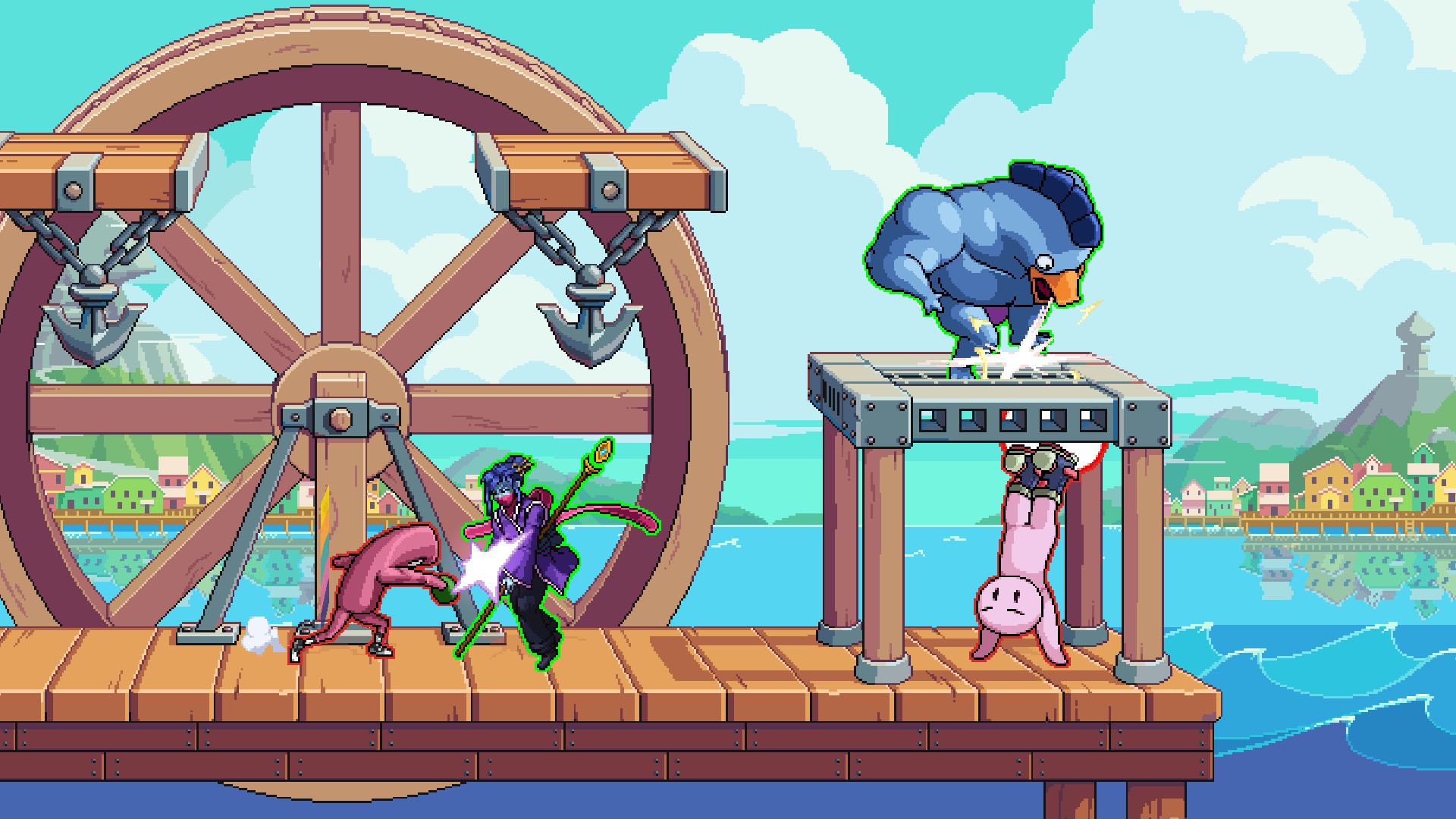 Fraymakers: Hope for a Bright Future

Or maybe you’re looking for an indie crossover akin to Smash Bros? Look no further than Fraymakers. Fraymakers, which is supposed to be out early next year, made a bit of a splash during its funding period last year, raising over $360,000 with nearly 10,000 backers (one of which is me!), and it sets out to be the indie answer to Smash that many have been craving for some time.

If you aren’t exactly thrilled with the current lineup of characters, which consists of semi-deep cuts like Welltaro from Downwell and CommanderVideo from the BIT.TRIP series, don’t worry, most people aren’t. Thankfully, since the game hit pretty much all of its stretch goals, we’ve got three heretofore unseen characters in the base roster along with some post-launch stuff to look forward to, so if you really just wanna see Hat Kid beat up Ultra Fishbunjin 3000—you and me both, buddy—there’s still hope. The game will feature a robust assist system akin to what many traditional fighters have, allowing it to include characters from all around the indie scene such as The Kid from I Wanna Be The Guy, Peppino from Pizza Tower, and… Super Hexagon. Just, the entire game Super Hexagon. It’s an assist in this game. Yeah.

In terms of gameplay, Fraymakers promises to include a lot of what I love about NASB, including airdashing for that extra bit of mobility, and directional blocking, making defensive play much more dynamic and interesting. (And in case you thought otherwise, you can wavedash in this one, too.) However, the game’s also coming with full mod support from launch with a unique Fraytools system, allowing people to make Fraymakers whatever they want. Additionally, the developers claim on the game’s Kickstarter page that they’re prioritizing the “easy to pick up, hard to master” mantra that the platform fighting genre is built on, meaning, in their words, “new players can still have tons of fun while those looking to play at a high level have endless depth and nuance to explore.”

I can’t speak too much on this game since I obviously haven’t played it yet (and I hope to soon!), but Fraymakers is looking super promising and I have faith that the good boys at McLeodGaming will do us die-hard indie fans good. 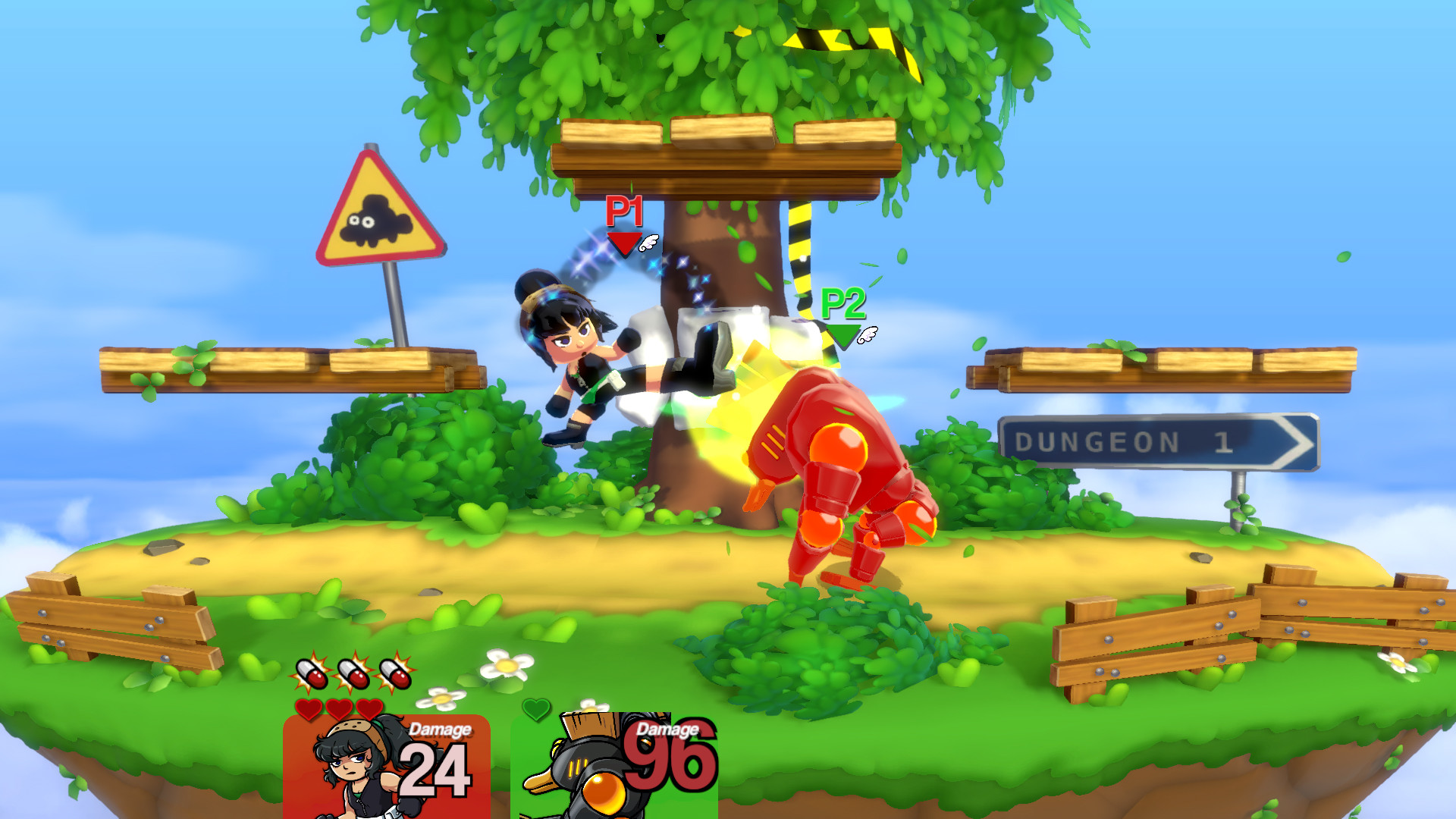 Yeah, I could go on all day. There are plenty of great platform fighters that I haven’t even played such as Slap City, Lethal League, Rushdown Revolt, etc. (And there’s also that Warner Bros. platform fighter that’s apparently being made, which we’ll see how that goes.) But my point in highlighting the ones that I did is that in my opinion, there’s never been a better time than now to be into platform fighters.

Not even ten years ago, every non-Smash platform fighter on the market was either gimmicky trash or some licensed shlock that probably didn’t play very well. But now, we live in an age where a bunch of indie devs are making platform fighters better than the people who invented them. It’s awesome. And now that Smash Ultimate is winding down with its last DLC character, hopefully you’ll take this as an opportunity to explore outward in the genre and try something you haven’t yet. You might even be surprised—as a former die-hard Smash fan, I know I was.

Hey, I'm Ze Diglett. I mostly play indie games, though I have my roots in Nintendo stuff. I don't really define myself by any specific genre(s), but some of my favorites include roguelikes, Metroidvanias, and platform fighters. I also have a YouTube channel, which you've probably seen, even if you don't remember it ;)