Blasphemous is a metroidvania game developed by The Game Kitchen and published by Team 17 for PC, Switch, PS4 and Xbox One in 2019, with ports for Linux and Mac being made in 2020. In the heavily religious land of Cvstodia, a mysterious power known as The Miracle has manifested, which has transformed the people inte grotesque monsters as a consequence of their guilt and desire to punish themselves. As The Penitent One, the player embarks on a pilgrimage to reach the Cradle of Affliction, the very source of The Miracle. 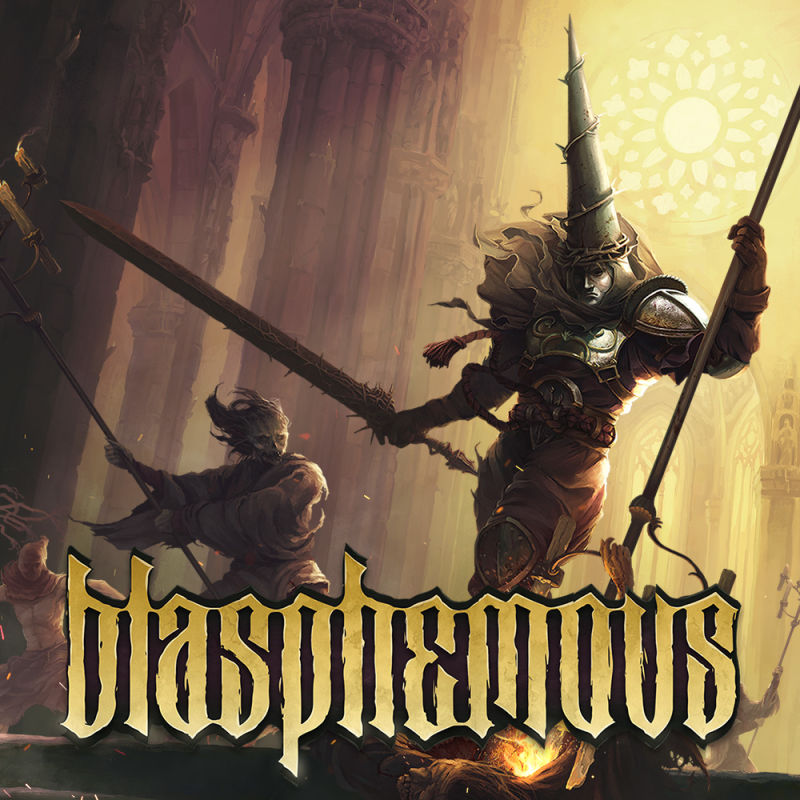 In The Name of Penitence

Being simply drenched in the influence of Roman Catholicism and going for the most metal artstyle imaginable (with gore to spare), Blasphemous is a very raw experience. Even more so if you pick the Spanish dub without understanding of the language just to let the guilt-addled dialogue wash over you like a torrent of thorns and nails.

Suffice to say, the game perfectly achieves its goal of creating a world that exaggerates Catholicism to such a degree that it almost feels like parody. The resulting creatures, locations (with names such as Wasteland of the Buried Churches, Brotherhood of the Silent Sorrow and Convent of Our Lady of the Charred Visage) and general feel of the game stands without ilk.

Of course, that does leave the game strumming very hard on a single, very specific note for the entire runtime. There is some mystery in trying to understand the world, but soon you'll simply accept it for the metal hellhole that it is and move from tortured character to tortured character, gawking at whatever horrific scenario The Miracle has cooked up for them.

The art does manage to carry the game in spite of this though, as despite the 18 hours I spent on my first playthrough, I never felt like the game dragged its heels, as the themes of guilt and penance get reinterpreted in new and gruesome ways in every area.

With My Thorn In Hand

With Cvstodia being marred by blood and death, it should come as no surprise that fighting your way through it is just as harsh. I had a hell of a time with it, as I deliberately went through the path of most resistance just to see how well the game would respond. Said response was to slap me silly for my insolence. Which was thematically appropriate, if nothing else.

But even if you don't play like a headstrong idiot, it's still a lot to get used to before Cvstodia kneels to your might. Upgrades are spread apart pretty far and every one feels amazing to aquire, as they really make a difference in the struggle against the corrupted horde. But skill with the parrying system and an understanding of the enemies play a major part as well, which is how I carved a messy path of blood and guts through the first half of the game when I replayed it.

The Penitent One has a basic sword string with two directional modifiers that I never found a use for. Slashing down enemies is simple enough, assuming they they are small enough to not be able to fight back once you attack. For larger foes, you have to go in with a defensive plan, either relying on parrying, jumping or evading to stay safe.

In a one-one-one battle, staying alive isn't super hard, as the parry is pretty forgiving (especially with an early upgrade). It's once multiple enemies are present that it's easy to panic and die. And wouldn't you know it, enemies are rarely fought alone. To stand a chance, you need to make use of a few key abilities, particularly the charge attack, the evade strike and the Righteous Riposte (attack after a parry with strict timing).

These attacks are either likely or guaranteed to stun an enemy, at which point you can insta-kill them with a custom (and fucking gnarly) execution. This is not only immediately helpful as a way of quickly dispatching foes, but in the long run it's also a good way of building Fervour.

Fervour is essentially mana and it builds slowly through basic attacks and a lot of it can be gained through a sacrifice of health and Tears of Atonement (Exp/money) as well. It can then be spent on Prayers (or a snazzy ranged skill), which are these situational spells that let you attack from a safe distance or buff yourself. Early on, you can't rely on them except as a way to get out of a tough spot, but it is possible to gain a large supply of Fervour by lategame and cast with wild abandon.

But should you die, that will prove difficult, as by dying you leave behind Guilt, which accrues with each death if you can't make it back to reclaim it. Leftover Guilt severly hampers your ability to generate Fervour and earn Tears from slain enemies.

So your penitence for failure is to make a corpse run while debuffed, at which point you will be rewarded with some health restoration and more Fervour than you would have normally gotten should you manage to make it back. I quite like the system both from a thematic point of view and as a way to keep the player on their toes. But the game offers a small mercy, as you can spend Tears at specific statues to remove the Guilt you have accrued across the land.

Tears are better spent in the game's basic skill tree system though, but you can also use them to bolster your supply of items to adorn your rosary with by visiting a few shops. These items are various stat buffs, which alongside sword modifications let you shift the gameplay slightly to your liking. It's not a full-fledged RPG system, but there's enough there to let you mess around with some aspects of gameplay like Fervour gain and how parries work.

Even discounting the excellent spritework of the various areas (and the copius amount of Spanish guitar in their music tracks), I'm very happy with the world of Blasphemous. Once the game begins and you pass by a short tutorial area into the hub, you have free reign over a ton of space before you're required to beat a boss. The reason the game can do this is because all of the progression-gaiting abilities you normally associate with the genre are completely optional here.

It took me so long to find one of these abilities that I assumed the game just didn't have any. Really, it's your knowledge and skill that guides your path through the game, though extra abilities certainly help, as they can help you with some tricky platforming and naturally hide a bunch of secrets. Though with how obtuse a few of them are to find thanks to the game's quests, I wouldn't be surprised if you found it easier to just go beat the final boss compared to trying to puzzle them out.

As you explore, you will find a great number of items with no clear purpose that you are meant to give to the correct NPC, with very few clues telling you who wants what. It's not a dealbreaker, but you need to get out of the mindset of wanting to deliver the correct thing to the correct place immediately, as a lot of items need to be given in sets and doing rounds across the whole world to check in with people takes a lot of time, even when employing copious amounts of warping.

The platforming isn't super special but feels pretty good for the most part. It can be awfully strict in some areas though, as there is sometimes next to no leeway when making jumps. I even found myself getting stuck in midair a few times. This never got me killed, though I had to reload to free myself once. I suppose that was The Miracle's way of punishing me for sitting on this great game for so long.