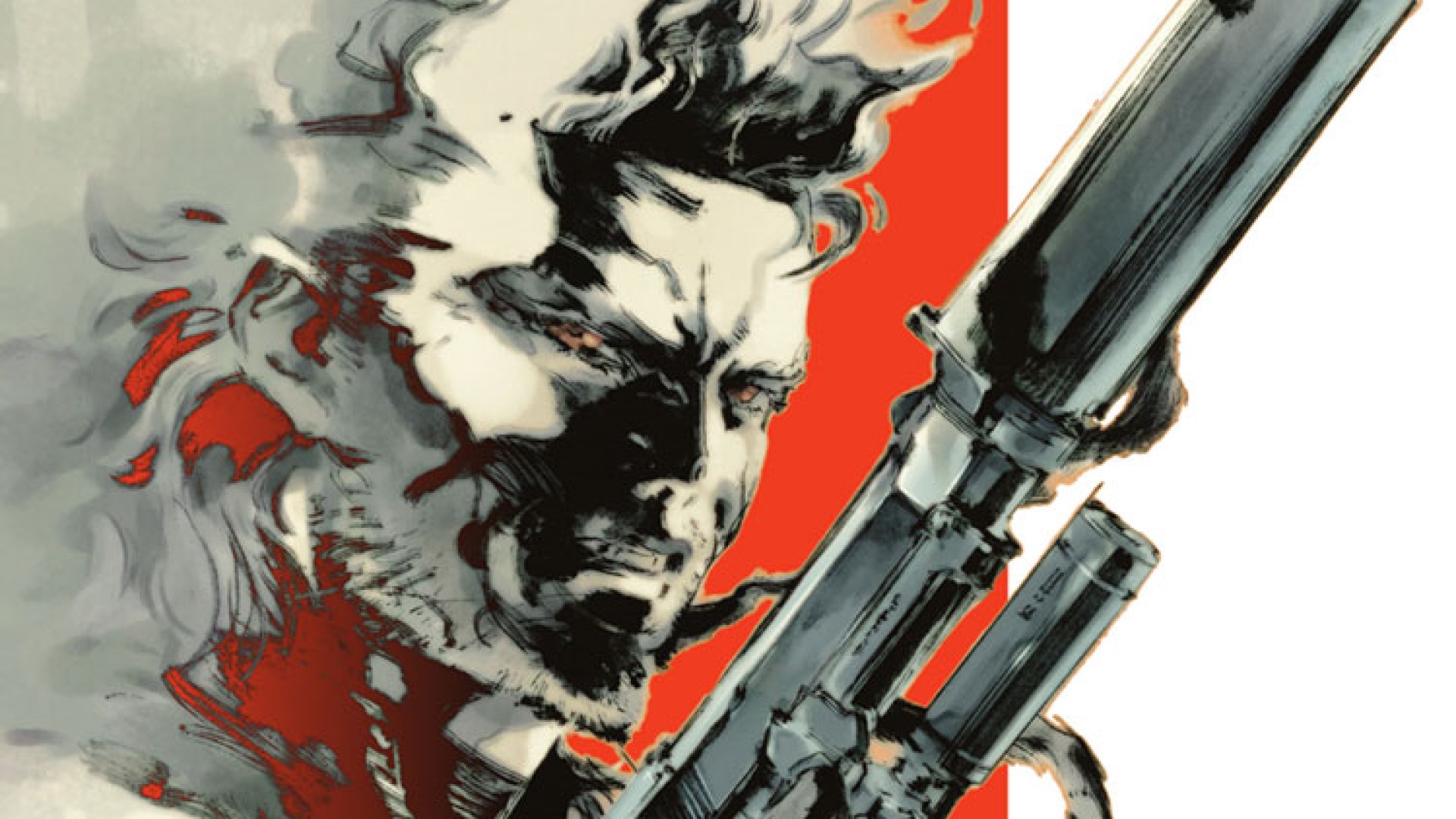 The ranking of Metal Gear games continues with Metal Gear Solid 2: Sons of Liberty. You can find the rank itself at the bottom. So, without further ado, let’s get into it.

The game follows two different characters in two different time periods. The first part follows Solid Snake in 2007 as he infiltrates a tanker that is said to be carrying a Metal Gear Ray. The second part follows a rookie named Raiden as he infiltrates an oil tanker taken over by the Sons of Liberty (who also kidnapped the President of the United States). They are threatening to destroy the tanker and cause a major oil spill, but of course knowing how a Kojima game goes, nothing is ever as simple as it seems.

If there is one thing that Kojima has made me realize while playing this game and this series as a whole, it’s that this medium is unique for its interactivity, which is something I’m beginning to see slip away with this game. I don’t necessarily think every game needs to be gameplay-heavy, but at some point I begin to question if I would rather play through this story or watch it like a movie. Dramatic wording aside, I think MGS2 is a big shift for the series, but one I don’t think I’m entirely onboard with.

As a surprise to no one who has any knowledge of this series, the story and characters in this game are complex, crazy, and overall solid. MGS2’s story still feels ahead of its time, and this game released in 2001. Characters and factions are intricate and their relationships aren’t as simple as they seem, the plot takes many twists and turns, storylines are interwoven well, and the game tackles many mature themes for a video game like the power of information, disinformation, and artificial intelligence, among many other things. Sometimes its complexities does get out of hand and it can get difficult to keep track of everything, but the game does a decent job at reeling it back in from time-to-time, even though it does so by exposition dumps which I’m not a big fan of. Also, the big twist towards the end is not only well executed, but it also interacts with the gameplay in interesting ways. 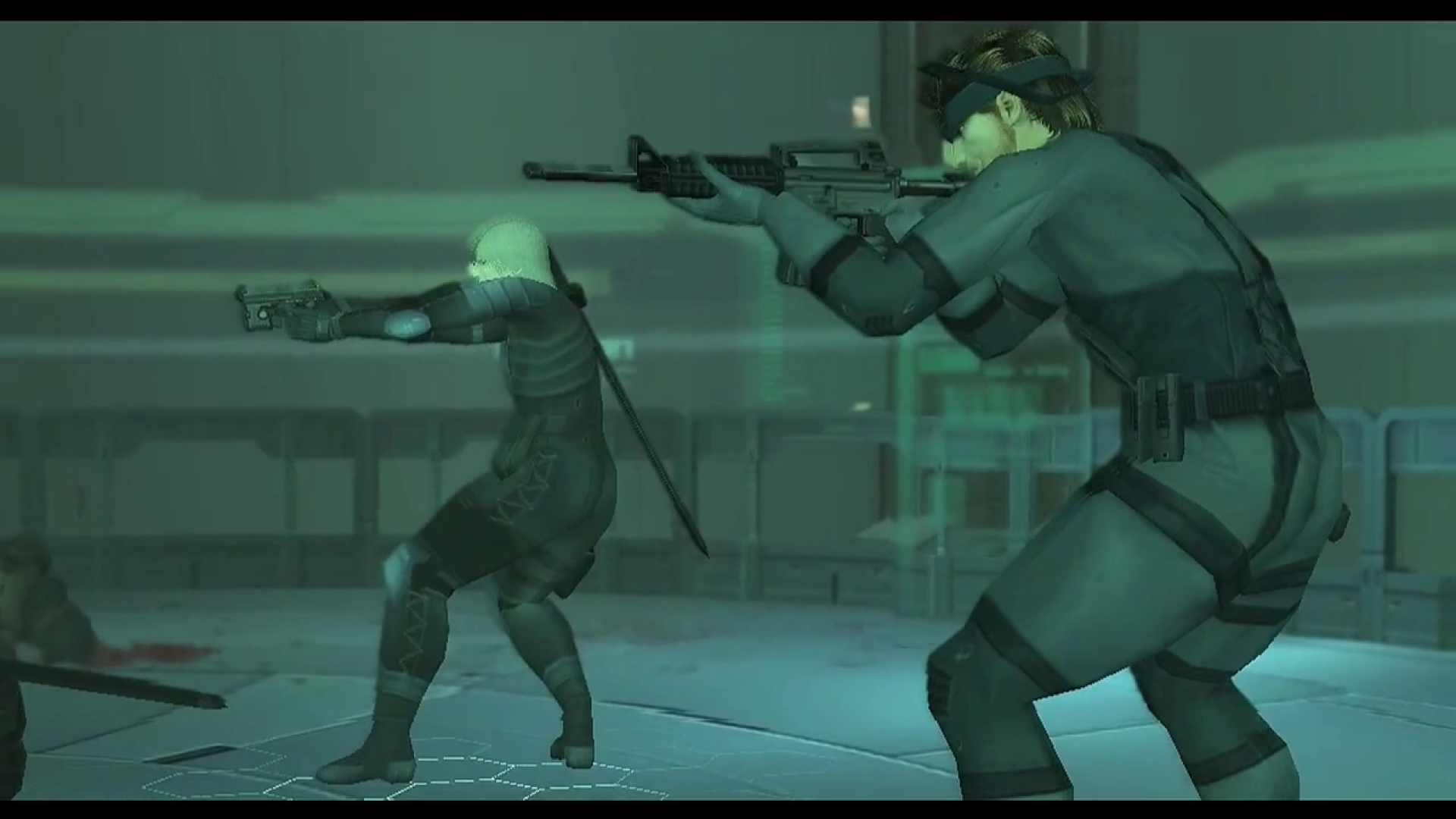 Weird things start to happen when these two meet up. Then again, weird things happen around these two in general.

The story is split into two main parts: the ship part and the tanker part. The ship part is pretty short and mostly straightforward, with Snake running around trying to find a Metal Gear while dealing with Russians who infiltrated the boat. While things pick up towards the end, where this story goes really off-the-rails is in the second part on the tanker where the protagonist shifts to a new character named Raiden. At first, he comes off as a newbie who thinks he knows it all from VR training, but his darker past begins to show as the game goes on. It’s in this Raiden part of the plot where the best and the worst of the story-side of this game shows. While Metal Gear Solid did get crazy with its story, this game takes it to a higher level that I found borderline goofy. Ocelot’s new arm is from Liquid Snake and it includes his personality that takes over Ocelot sometimes, the new set of villains includes a vampire, there is now another Snake, and more.

On top of its strangeness, I also started to notice a lot of similarities to the first plot and methods of which the game tried to write himself out of a corner. Clueless protagonist, a majority of the cutscenes playing out in super long cutscenes (which I am beginning to lose my patience with a bit), deus ex characters, exposition dumps to help explain the factions and keep the story in check, a band of villains with unique personalities and strange abilities (which I didn’t find as compelling in this game as I did with the set of villains in the last game), and more. There is a narrative explanation for its similarities to the first game, but that in-and-of-itself also feels like the game writing itself out of a corner. I don’t want to say it isn’t okay for Sons of Liberty to re-implement story elements like unique villains into future games, but I also think there are just enough similarities between this story and the last that makes Sons of Liberty feel a bit copy-and-paste.

The next big staple of this series is stealth. At first, I found the various new stealth mechanics and features impressive and ahead of its time. As time went on, though, I found those new features more and more frustrating to the point where I just stopped interacting with them altogether.

The enemies in this game are some of the smartest enemies I’ve encountered in a stealth game. Some of their features include the alarm sounding if you knock out a guard while calling an alert because he complete his message, guards noticing shadows or even a foot sticking out of a corner, guards not staying unconscious forever, guards often working in packs, and more. They are incredibly smart, but to a point of frustration. I know it sounds stupid to ask for dumber AI, but these enemies would spot me over things I don’t have great control over whether it be because I didn’t notice my foot sticking out due of the camera angle or I didn’t quite nail a headshot on a guard because of how hard it can be to line up shots in first-person view. Whenever this happened, the guards would call in the cavalry, and the more times this happened the more I became detached from the stealth. By the end, if I found myself in a stealth situation that had any chance of me getting caught, I would just run through enemies to the next area, die in that new area, and respawn in the new area with my alerts back to normal. Of course, all of this could be due to the fact that I’m playing on a PS3 and I find that controller hard to use compared to other controllers or keyboard and mouse, but trying to stealth around against these enemies made me appreciate the AI of NPCs in other stealth games like Hitman or Splinter Cell.

Despite the difficult enemies, I thought the other stealth mechanics and attention to details were neat. Even though aiming is tough, I think being able to aim and shoot in first-person allows for cleaner enemy hits, and the option to snap to targets in traditional view is still available as well. You tip-toe over bodies on the ground, and guards will throw their hands up if you sneak up on them from behind. Otherwise, a lot of the stealth mechanics and evasion mechanics are built upon the last game. One point of frustration I had with stealth was only being able to dump bodies at certain railings instead of any railing, but otherwise the stealth in this game is essentially the same as last game’s but with more built upon it. 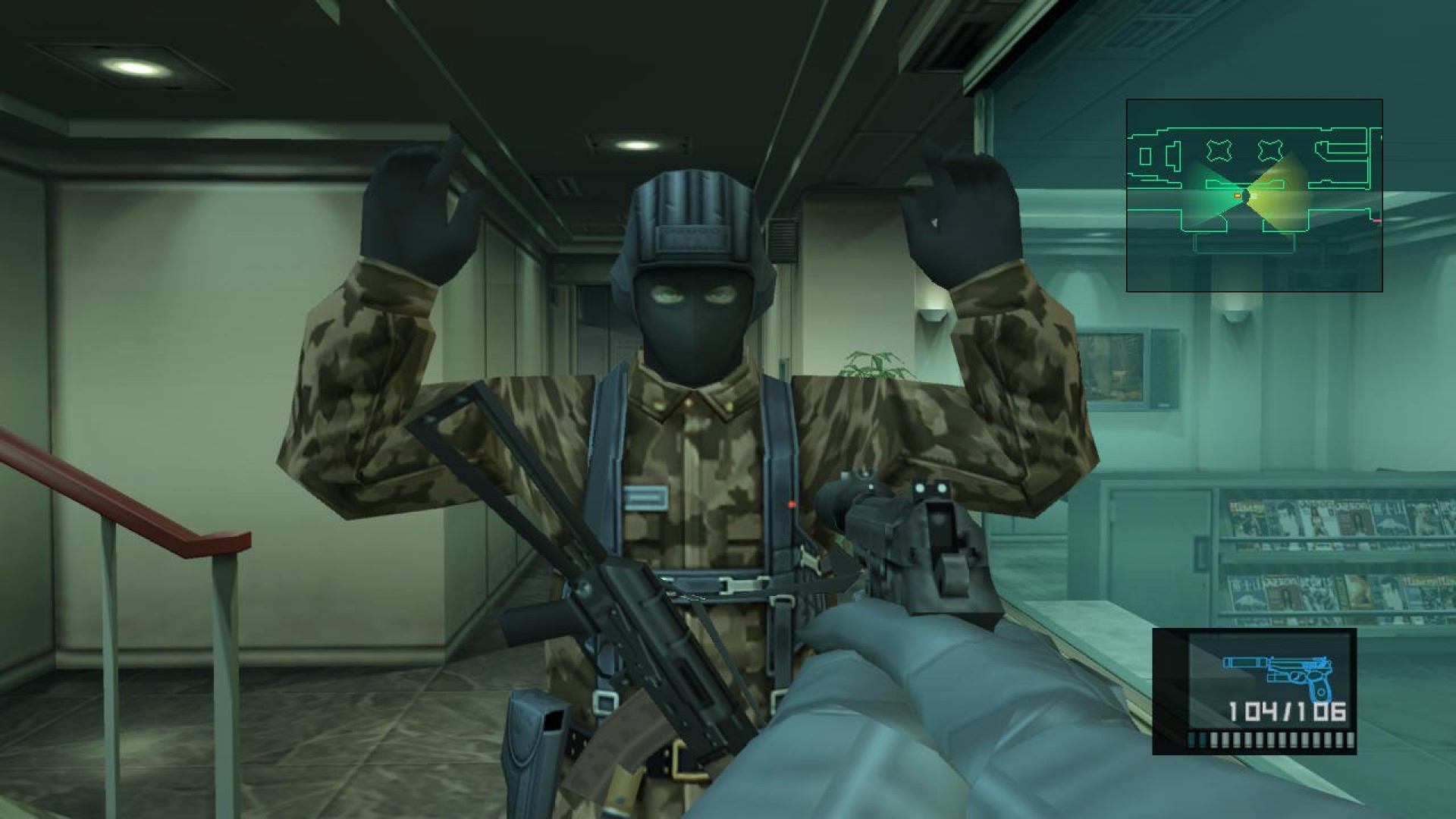 As for the gameplay outside of the stealth, it has its ups and downs. For starters, the game looks incredible for its age, and specific elements like actual facial movements, scenery and items with their own textures and physics like items on shelves moving around, and rain shows just how far this game has come graphically since the last one. I think the most important thing to note about the gameplay here though is its shift away from its metroidvania elements. They’re still there, but in a much, much lighter capacity, and I’m not entirely onboard with this shift because I think that’s what makes this series so unique. There are some small improvements to the game like being able to view the radar while in first-person and the ability to view a map in the tanker section, but there are also some downgrades I didn’t really enjoy too. Swimming sucks, controlling an RC rocket is terrible, spraying bombs feels off, trying to navigate around the ship in the first half is a bit confusing, constantly being stopped by calls at the beginning of the tanker section got annoying fast, and I found some of the camera angles to be a bit wonky.

The last thing I’ll mention are the boss fights, which I think are an important pillar to this game considering its unique cast of villains. For this game, I found them to be mixed. I really enjoyed the Metal Gear Ray fight, but on the other hand I found the Fatman fight to be one of my least favorite boss fights in all of gaming because of its reliance on first-person aiming and bomb defusal. Some of the bosses are fine, some are forgettable, and some are decent. They are all over the place, and while it’s certainly better than all of them being bad, I also remember previous games having more consistently enjoyable boss fights.

Outside of the main game, boss survival makes a return. Also, there are some extra levels where you play as Snake on the tanker. I never really cared about the bonus modes in these games, and these ones are no different. I dabbled in them real quick then dropped them.

In conclusion, I think Sons of Liberty is a big shift for the series, but I also don’t think it’s the right one for me. While its story is enjoyable and there are parts of the game and its attention to detail that are worth admiring, I found myself really more frustrated with the lack of player agency. It feels more like a wrestling match over who gets to control the game, and every moment the game wrestled control away from me I found myself a little bit more frustrated. Unfortunately, I don’t think this complaint is going to go away either. I’m not against story games or long cutscenes or anything like that, but I think this game walks the line between a game and a movie, and I didn’t really find the game part all that great compared to previous Metal Gear games. Because of that, I’m putting this game at the bottom of the list, and I don’t really know where I think it’ll end up by the end.