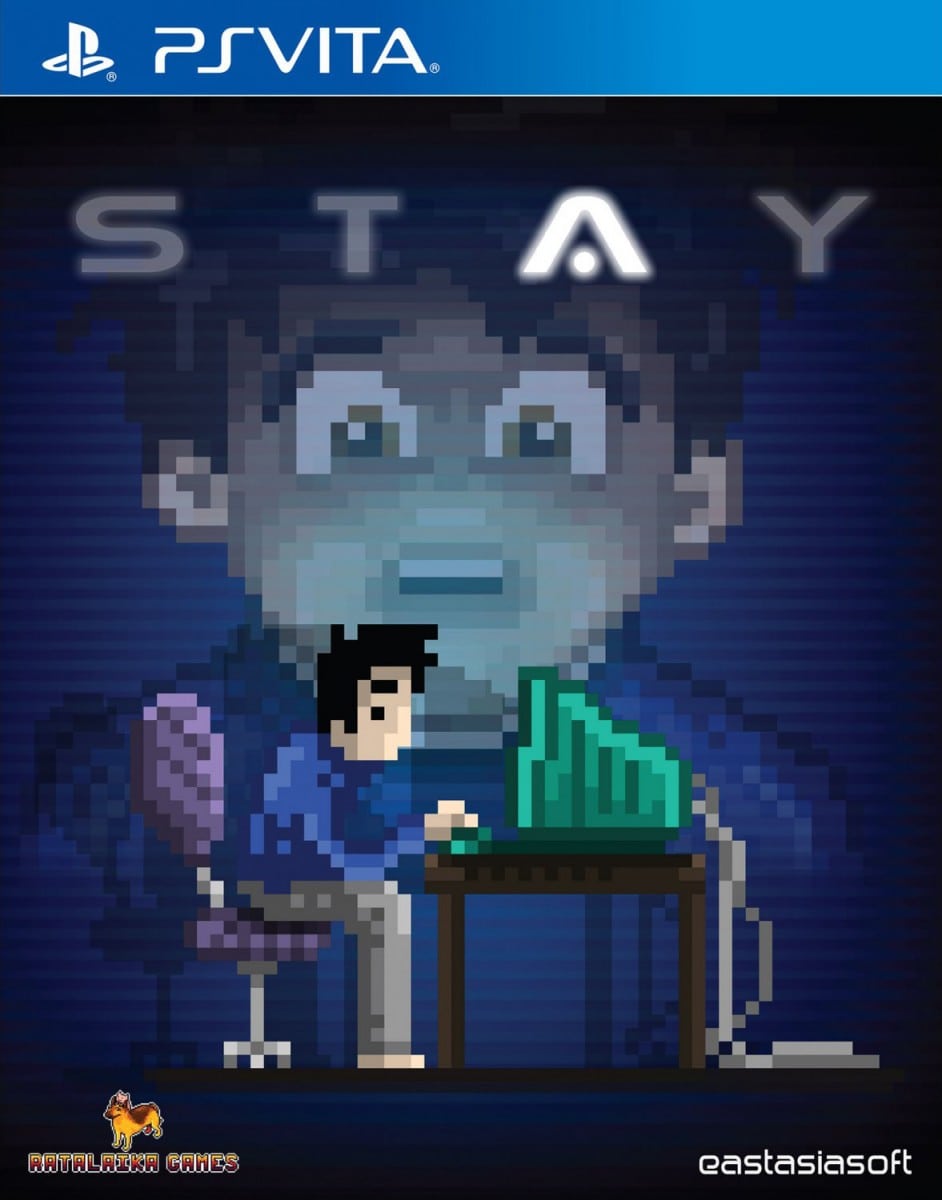 The main focus of this medium has always been to entertain us players, and with the passing years it has also evolved into something greater that in some cases, within the whole video game spectrum, tackles real life without losing that entertaining factor. Adventure games were the spark and then came various sub genres that only amplified this way of connecting players to games by showcasing a reality that once seemed dull to put in a game, but that can turn out to be really something. STAY is this mix of adventure, visual novel, puzzle solving, and point and click game that touches a subject matter not particularly easy to talk about due to the many variants and interpretations but, this game knows just that presents us with an experience that hits home in more ways than one.

In STAY we take control of a person who is in charge of talking to a kidnapped individual. This sharing of words happens via a chat room which is the only way of communication this person has. Who is that person, now? A Psychologist who out of the sudden was thrown into a storage room as in some kind of sick game like those seen in movies like 'Saw'. The situation is out of context at first but with time the interaction between you and Quinn will extend for better or worse depending on your answers and eventually controlling Quinn will take place to solve the puzzles present where he is to help figure an escape route or, to find out what is going on. Plot twist: the game happens in real time meaning that a counter will be right there even when you leave playing the game until you finish playing it. This counter will modify how Quinn behaves as if you had left someone waiting in real life, thing is, he is kidnapped and on the edge of anxiety and a depression that may get the worst of him. Will you help this person the best you can by being a good listener who understands everyone can suffer from these mental issues no matter their field or, will you question him every time he opens up to you making him have negative changes of heart? The interaction is brilliantly driven. 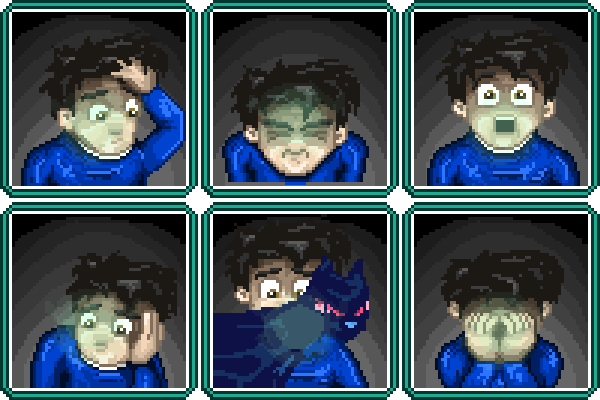 Following the level of immersion found within the rich story, the use of pixel art to display the area where Quinn resides and that of the chat room is done just fine. Nothing particularly interesting, just right to the point. The sound however does play a vital role by being there just when it's needed. When talking with Quinn all you hear are the sound effects on both keyboards and that of the transmitting web camera. When cut scenes take place the immersion thanks to the soundtrack only adds to the mystery of it all. Props to the final confrontation's context which takes the best of STAY's graphics, sound, and story to deliver a powerful scene. One aspect that hurt the puzzles and thus the pacing was how everything seems mixed or not clearly put into place. I know puzzles require us to think out of the box, but a messy box only make things harder, and in repeated occasions. Other than that, the puzzles when done well do transport us to Quinn's shoes with the difficulty being those issues he has to face and we, as players, must help him overcome.

Most of the game happens in the chat room. Therefore, a lot of narrative structure is the main hook of this game, and here I have to give it all the praise I can. Is this my first visual novel? Yes. Am I being biased due to this factor? No. I give praise to STAY's storytelling (which you can say is its gameplay as a whole) for how it switches the roles of psychology therapy sessions as we can end up being Quinn's own psychologist even though he is one himself. Not to spoil anything, scrolling through each chapter conversation helps a lot as his reactions resolve whether we were paying attention or nor but, sometimes that won't be enough as he also demands not only memory but consideration to the position he is in, no matter the circumstances. Showcasing the human side, which this game does with flying colors you are in charge of Quinn's emotions and believe when I say this: his story is a true depiction of how many of us see life, love, friendship and many other themes we often take from granted. This behavior of his is understandable as he doesn't know if he is going to make it, he doesn't know you and most importantly, to let out everything inside him is exactly what his captor wants but also, the best and ironically harsh part of therapy. Both his responses and ours feel so relevant, timeless, toxic, and condescending at the same time that the chat room often feels no different from those comments we see in most social media nowadays. 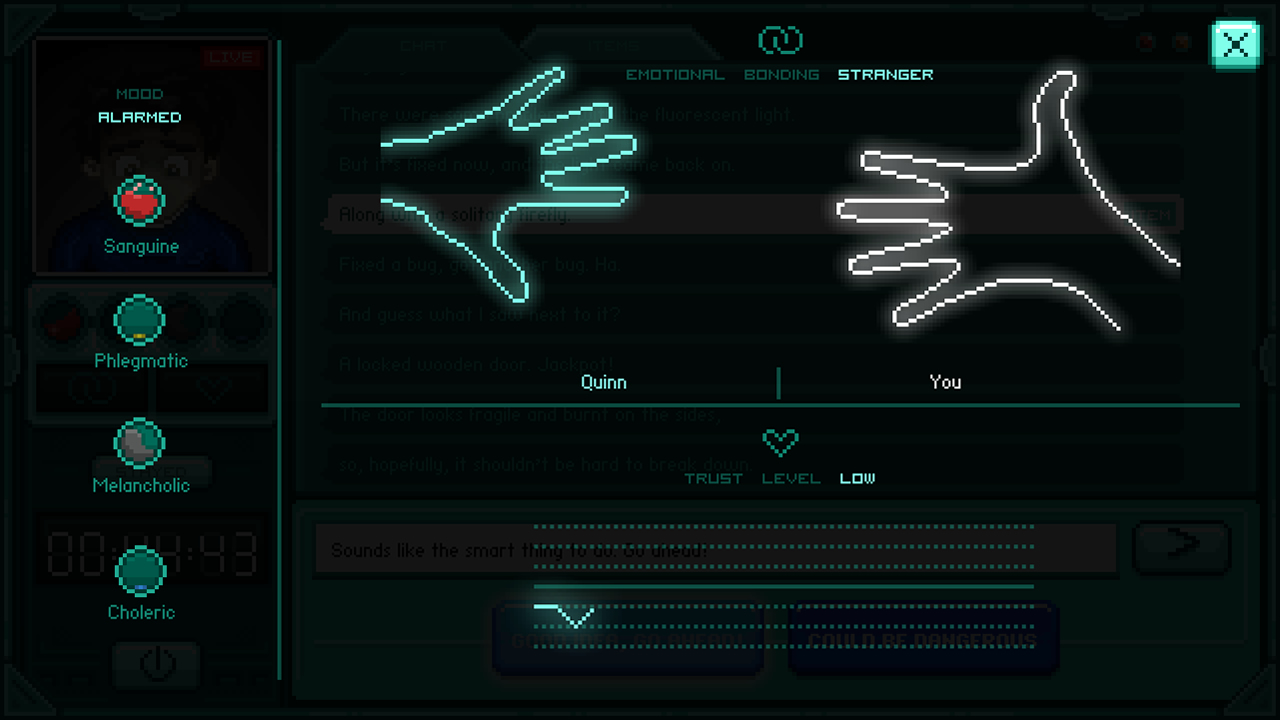 Going personal, in these six years that I have been going to a psychologist myself I wish I had had the courage to be a little like Quinn. His anecdotes go from the silliest of things to the ones that shouldn't be said to everyone due to how painful they can be but this is what the game wants the players to experience, right? To see how us humans are so fragile when we are on edge that we look for anyone to open up to, no considering the possible outcomes. While in the game I understood him for the most part, I couldn't see him angry but doing some research on the game I could find that the whole chat room and his behavior can change dramatically for the worse if you don't side with him. In the end, I'm glad I didn't experience that as my connection with him was very noble and sometimes painful. Guess the game did a great job here by making a compelling character that we can both love or hate in a matter of minutes.

Due to the real time mechanic of this game, I can't recommend it to anyone let alone if they aren't into visual novels. I wasn't actually, but the game's writing kept me up all night beating the game. Yeah, I cared about Quinn a lot as this game depicts him as anyone who is struggling with mental issues and that we can always lend a helping hand. Want to play a game that makes you a psychologist, and a person who can be a light of hope or the worst possible thing ever to someone? Then this game is for you.

As a person dealing with anxiety and depression for six years now, this game is a reminder we are haven't been forgotten and that help is out there, we just need the will to get better and a good person not only to listen but to be with us when shit hits the fan.