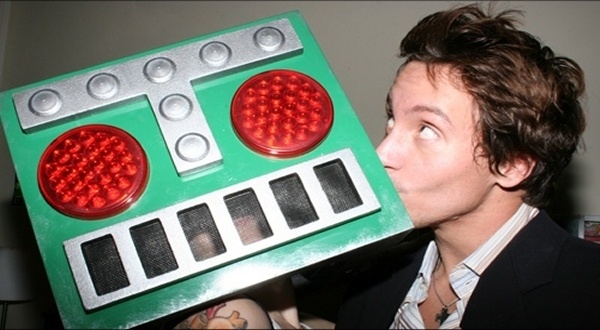 MSXdev is a long-running game dev compo for the MSX computers. The deadline for entries of the 2021 edition was the end of August 2021, and a record number of entries took part. Coincidentally, the rewards were also higher than ever before, with the reward pool exceeding 1000€ before counting in the physical rewards.

Having tried all the entries in the compo, here are ten of the games I want to keep playing (in order of registration).

Ten of my favourite entries of MSXdev'21 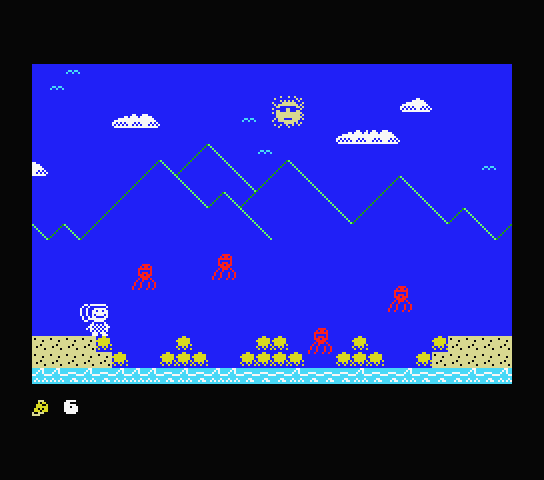 This is a very challenging platformer, made with Jonathan Cauldwell's MPAGD (Multi-Platform Arcade Game Designer). I'm particularly happy to see games made with that in the contest, as it decreases the threshold of creating new MSX games that (I believe) play faster than plain MSX-BASIC games wrapped into a ROM file. 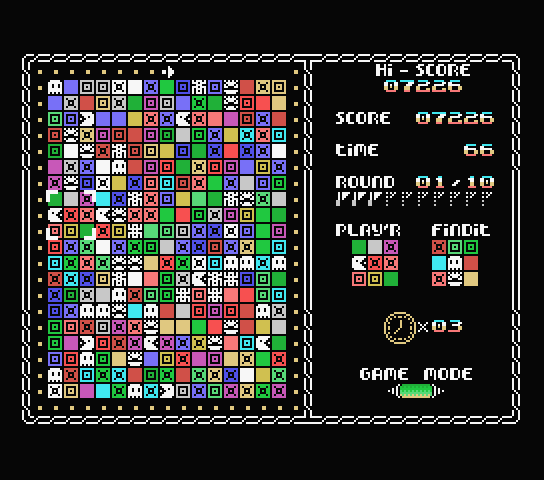 Last year had a game similar to this -- the display is filled with a mosaic of different tiles, and the player has to find the pattern the game gives as a task within a time limit. This one plays faster, is more challenging, has bonus stages and overall looks a lot better.

Most importantly, I am curious to find out how to build this kind of grid without ever duplicating the same pattern... 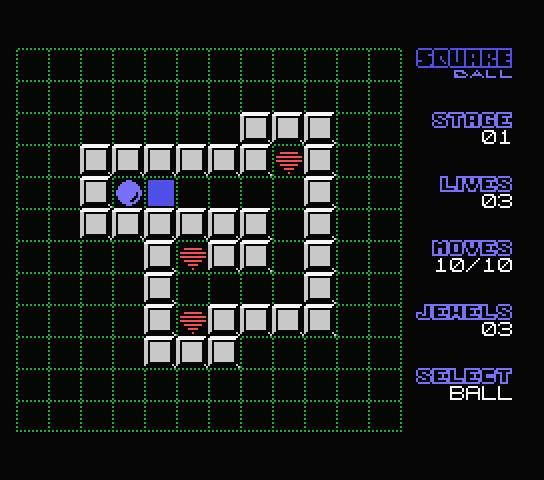 This is a bit more complex take on ice block puzzle. The player controls both the square and the ball. Both move like they're on ice, but only the ball can collect the red jewels needed to clear the level. I like how the game looks, and already the second level gets rather tough. The clear visuals also help here. 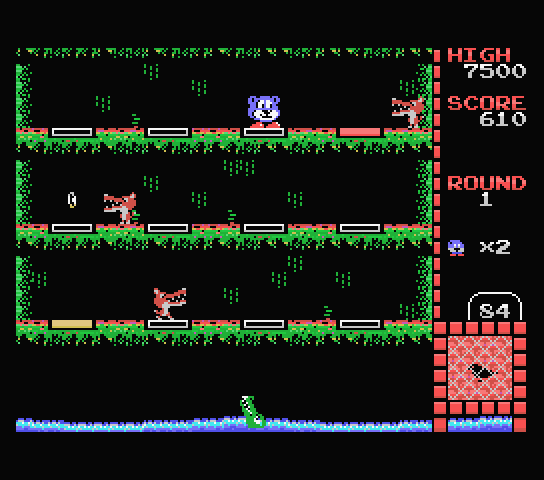 This is a good one. It has multiple levels with different rules, which alone is rather rare. It's reminiscent of Q*bert in that the player jumps from one platform to another while changing the colour of the tile. The graphics are also great, with mostly two-colour sprites in use. Due to clever planning, this doesn't result in any flicker that I've seen, and beside that, there's a lot of polish. 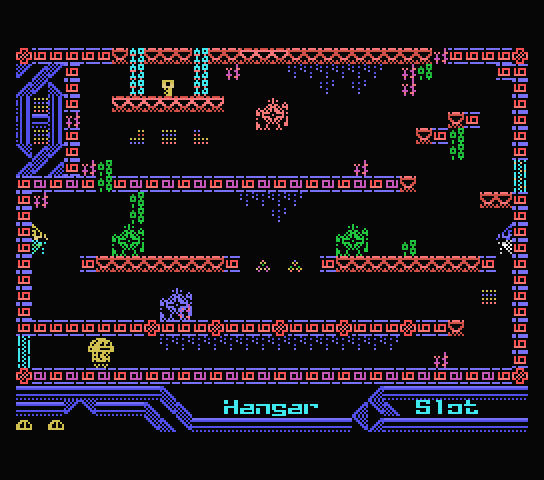 This is a series of one-room challenges. Good music, and the graphics are colourful and detailed as well. This is another MPAGD game. Again, very difficult but less so than Tortilla Sunrise, I think. The player has to collect a key to unlock the door to the next room. The player can carry only one item at a time -- the key or one of the several powerups in the game. I haven't got far enough to tell if this has more than one-room challenges, unlike Tortilla Sunrise, which allowed moving back and forth between rooms. 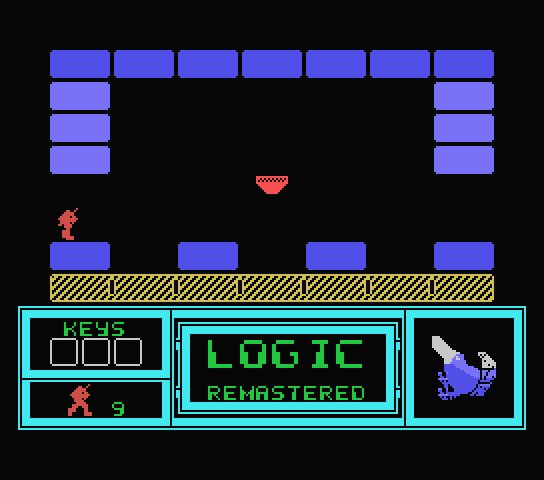 Despite its name, this is actually a platformer. Pressing down makes a low jump, pressing up makes a high jump. There are some issues with the room design: I may jump into a room so that I respawn to die repeatedly without a chance to do anything. A bit like that one trap room in Jet Set Willy. But unlike S.O.L.O. and Tortilla Sunrise, this hasn't yet been very difficult. 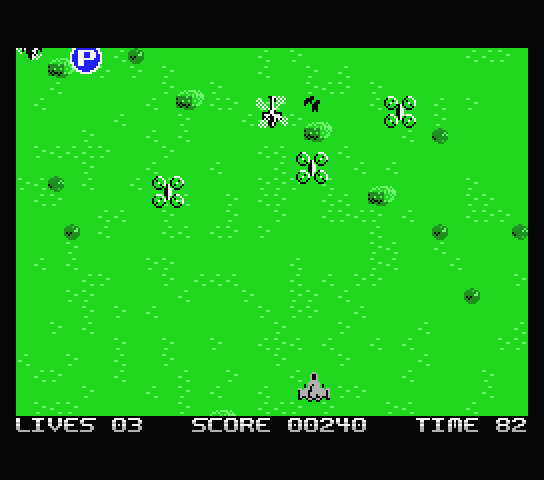 A shmup. This has only two levels, but it also has pretty good music and cutscenes. The scrolling happens in 8-pixel steps, but the enemy waves are designed in such a way that the limit of four sprites per scanline rarely causes flickering, despite the enemies and the player being made of two sprites each. I consider that deliberate and good design. 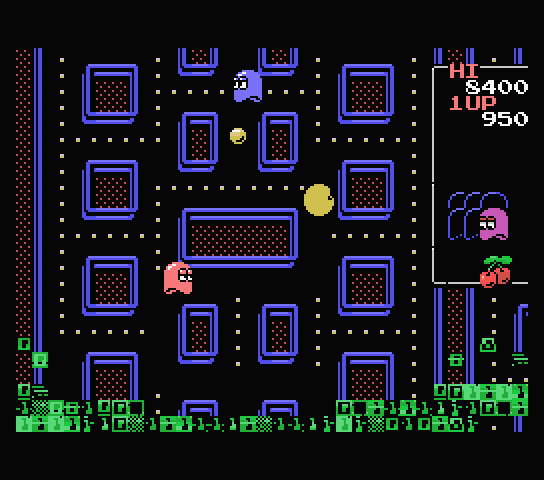 This is definitely a contender for the win. Here, the player is a yellow ball suspiciously looking like Pacman, eating small pellets and bigger pellets that allow you to eat away ghosts that also populate the maze. Pacman clone, you might think. Well, no? More like Pacman 256 demake, where the autoscrolling level is finite and goal is to eat every ghost before the level ends. The polish is again through the roof; smooth scrolling, the closer the player gets to the glitches the louder the glitch sound effects, and so on. 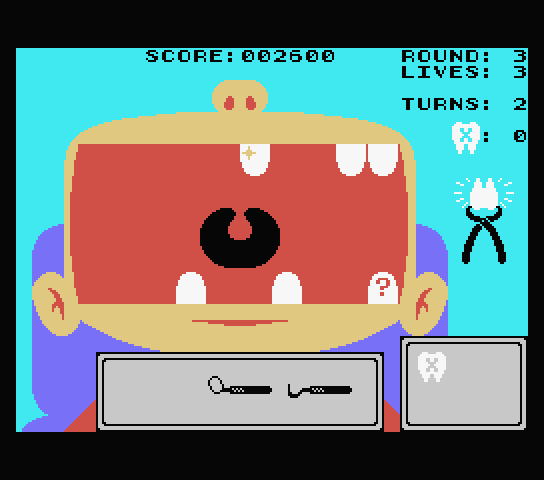 Ever wanted to be a dentist? No? Too bad! Here, you'll use mirrors, probes and logic to figure out which teeth need to be pulled out with tongs. Interesting concept for a puzzle game. 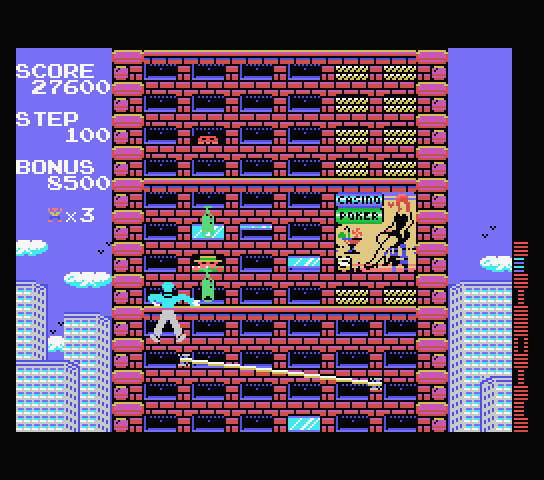 This is another well-made game. The player climbs up buildings while avoiding junk people throw from their windows and whyever they're sliding underwear and brassiere down the clotheslines, and other hazards. Although, those floors look flat enough to be crawlspaces.

Overall, I think this was a good year for MSXdev. While the winner of the last two contests didn't participate this time, there are definite highlights: Raven, PAC-01, No Back Down and Alien Attack are all top-notch games. On the next tier, I'd rank Fantastic Football, S.O.L.O. and Blockbuster. I'm not sure where Tortilla Sunrise would fall.

I think there's a simple litmus test to decide if the game is above the par or not, and that is if the game has proper background music. There are, of course, exceptions but all of the games I named in the previous paragraph have at least some kind of audio design.

You may have asked why I didn't name Fantastic Football and Blockbuster in the top-10. Well, mostly because I don't really like sports games and Blockbuster, while fun, starts up too slow. Most of the entries were platformers, puzzle games and puzzle-platformers, so Fantatic Football would've been a nice change of pace even in this list, but... this is my list.

I don't envy the jury of the contest; they have 30 days to review all these games (unless they started doing it already in advance). Since I'm not a jury member, I don't have to write this blog with as much care as they'll have to, but I did try to avoid directly criticizing games. That is also why I didn't cover all entries.

The contest schedule says the final results will be revealed on October 15th, but I think this time I can understand those deadlines being pushed a bit, if that comes to pass.

Something I consider worth noting is that there are many entries, but so many of them had the same authors. Robosoft had four games. Micha Mulder worked on both Raven and PAC-01. Under4MHz had three games. And so on. Gamecast Entertainment had also three, but two of them were disqualified. In total, there were 22 groups/individuals behind the 34 games.

Most of the years it would've been far better to have one entry polished to perfection rather than multiple entries, since the prize pool was much more limited in size. This time, I don't even know how many participants will be rewarded (well, everyone would get Blast Annual 2020 vol 2 digitally, but I was talking more about the physical and money prizes).

In the end, about one third of these games are such that I want to keep playing them (not including the two I already finished). But that's just me. Would any of you want to play any of them? Maybe not.