Not having RPG games of its own, Activision in the 1990s attempted to latch into any obscure RPG properties from Japan and support localizing it. Surprisingly, these localization efforts were highly competent but were honestly mostly wasted in mediocre games.

It might seem a bit harsh to call Guardian's Crusade a mediocre game, but in a way, it is designed that way. This is a JRPG that is designed to be a person's first JRPG, and as such is basic in its mechanics, story, style, and difficulty.

Unsurprisingly, for any experienced player, the end result is a simply boring game. 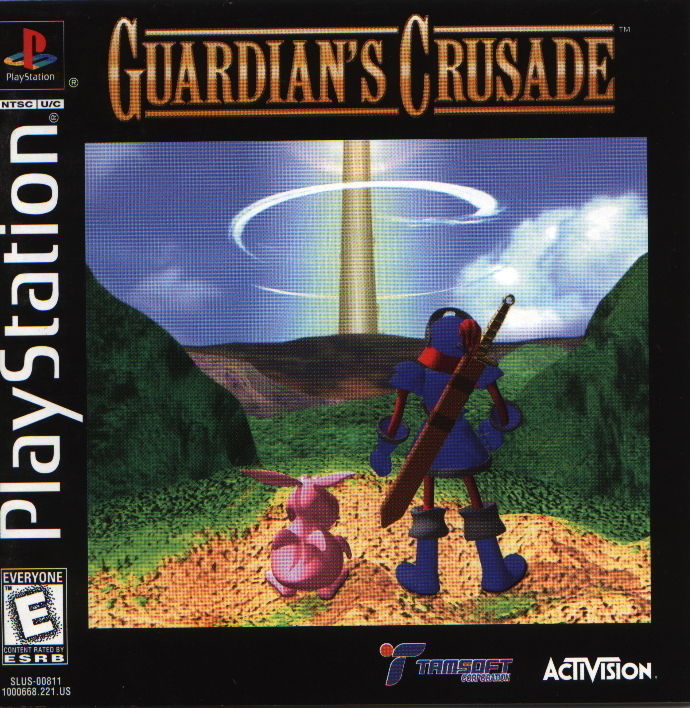 "Young man! Destiny is calling... For you to deliver... You must deliver this baby to its mother... To God's Tower..."

Guardian's Crusade story starts out simple and doesn't get much complicated as it goes on. It follows the silent protagonist, Knight, and his talkative fairy companion as they try to reach God's Tower to deliver a fat, pink, baby monster that is called Baby by default.

In their voyage, they encounter several small-town issues that they must resolve to progress, and grow to emotionally like and trust each other, which allowed Baby to transform into more powerful and useful forms in battle. 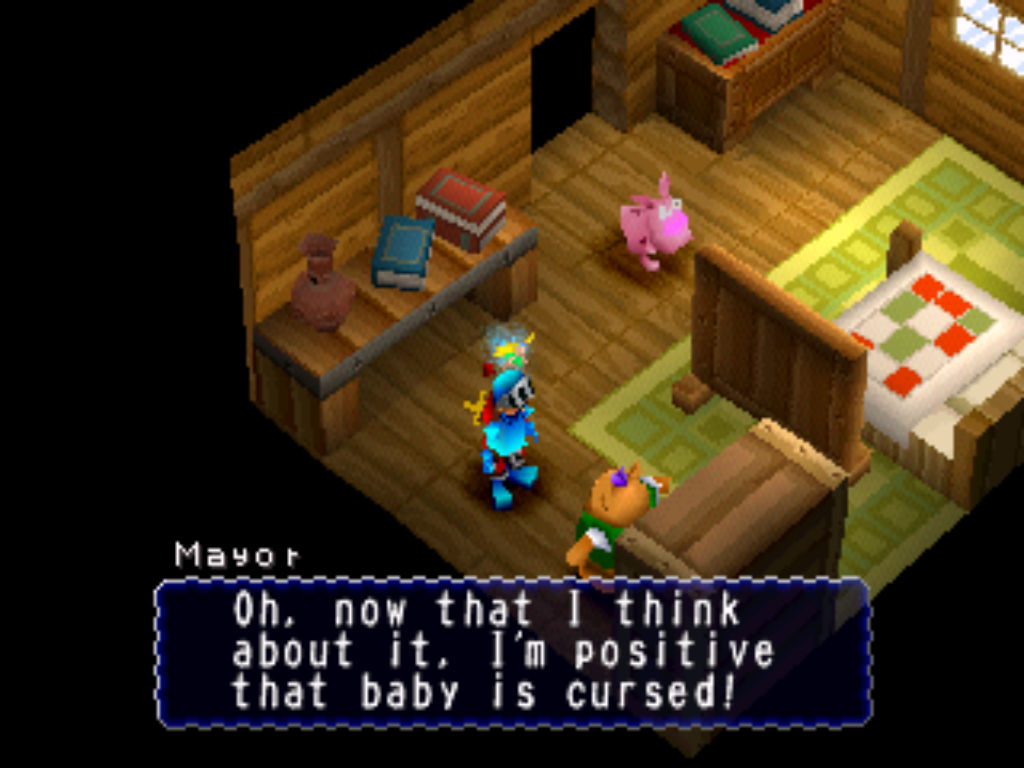 Thanks to the smart and occasionally funny localization of Activision, there is a lot of charm in the dialogue and character in what would be an otherwise forgettable adventure. In fact, the story ends up being the best part of the game. Its charm and comedic style remind me of Alundra 2 in a way.

Yet, the game struggles to sell its story in an impactful way due to the poor design of the characters, the monsters, and the world at large. It doesn't have the charm of the best JRPGs, and the story is honestly better told in other games.

What's left is a competent story that is presented in a completely forgettable package.

"If you fail, Darkness will prevail... and all that you know and love will be lost"

The game's battle system is a classic Turn-Based system with two unique twists.

First, the baby dragon can transform and auto-attack based on the relationship you build with him. This is nice, as the gameplay element follows the story, but the fact that you cannot control Baby puts a dampener on things. 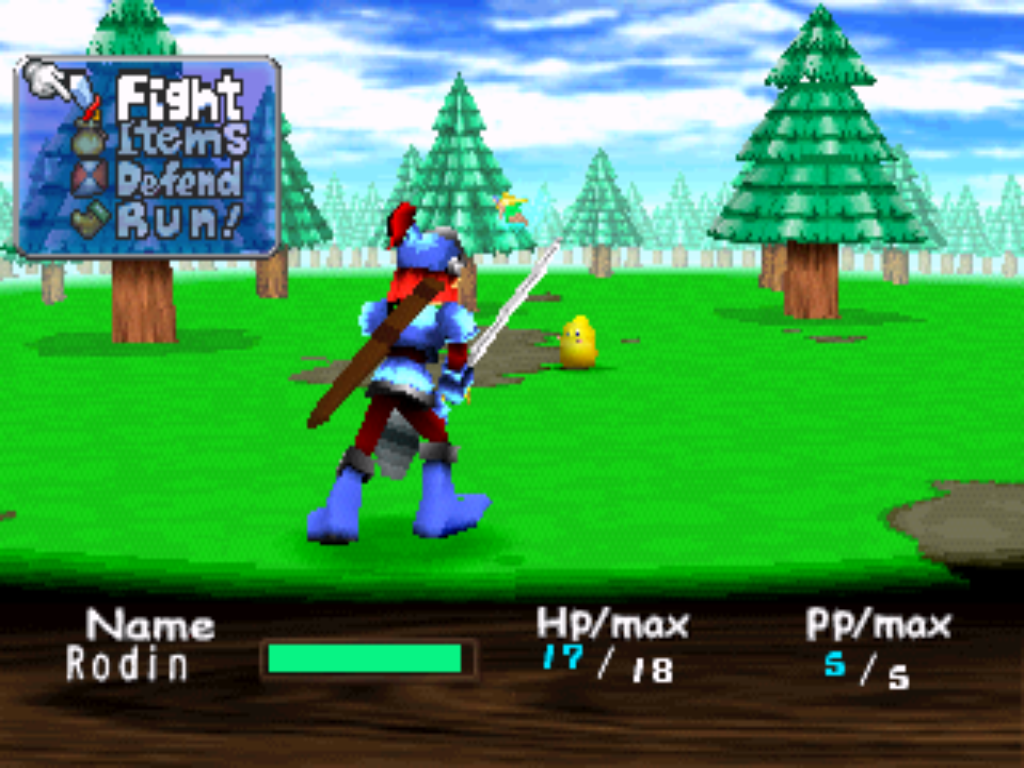 Battles are not very complex

Second, instead of magic attacks, you can summon several Toy-Soldiers in the battle that will auto-attack for a few turns before you need to summon them again. Its an interesting system that makes the game trivially easy, which is a theme throughout the game.

Basically, you are playing the entire game on auto-pilot, as there is no need to think about equipment, attack synergy, or anything else. All battles, including the boss battles, are mindlessly numb, making the interesting battle-system twerks an unnecessary distraction.

"You want to go to God's Tower? Sounds awfully dangerous"

I guess the clearest element that showcases the game's lack of ambition is its world design. Everything from the main character to the final stages is designed in such a boring way, and the early 3d polygonal graphics do not help.

Unlike the ugly but character-filled graphics of games like Alundra 2 and Final Fantasy VII, these are just completely boring stuff, which is easily apparent from the pedestrian way the world is constructed. This shows in the mediocre animations as well. 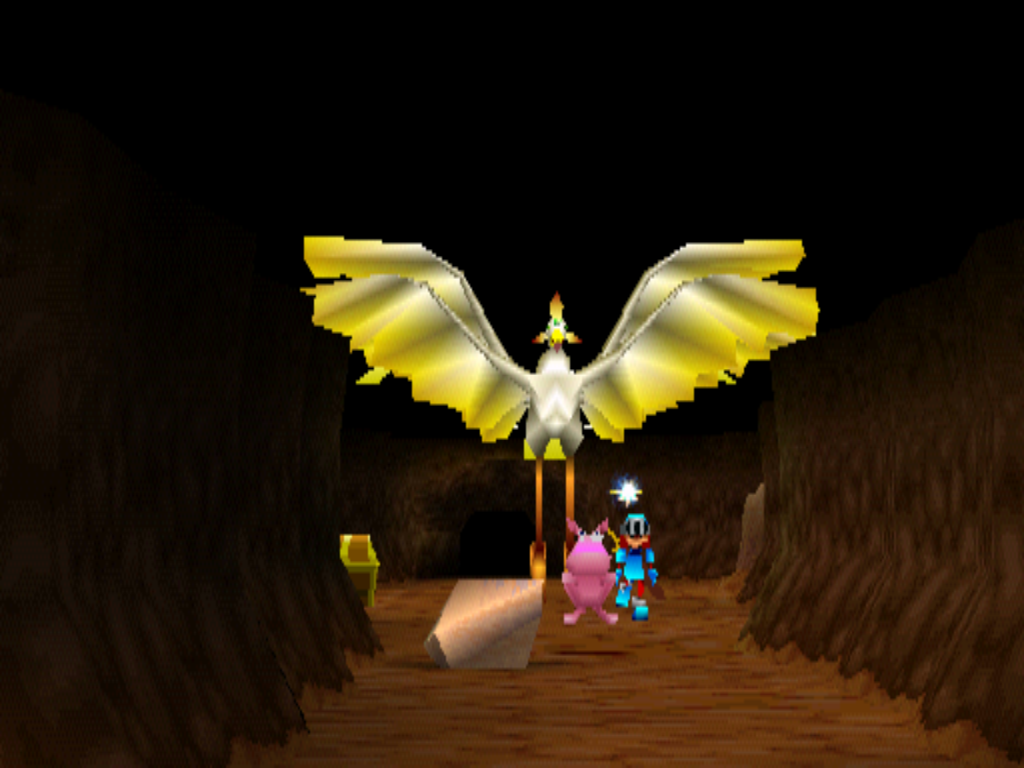 One thing that should be noted is how the entire world is almost compromised of a single dungeon with little to no loading time in between. However, that impression is soon shattered every time you go into a building and get longer load times than necessary because of that.

Similar to its graphics, the music is not anything special or particularly memorable.

Activision did not have a winner in their hands with this game, but the charm and technical competence in which they handled the localization obviously had an impact on the charming localization of Alundra 2, which is a better realization of the visual and tonal style of this game.

At least something good did come out of their experience with this game. 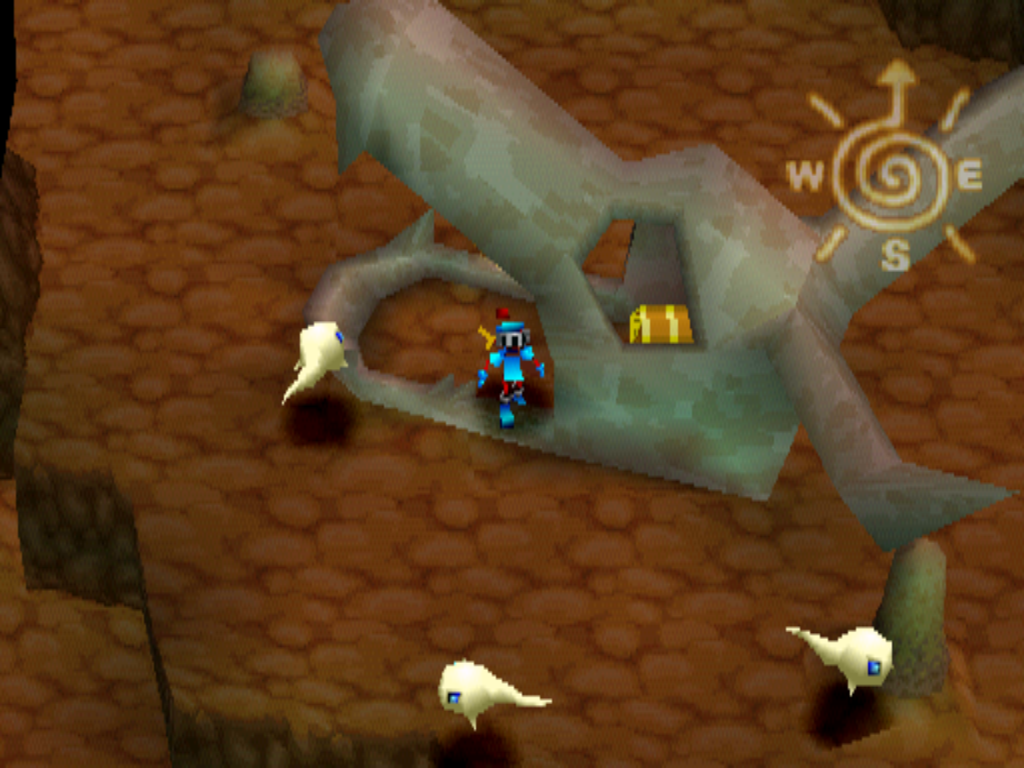 1-Press select to view the mini-map.
2-Ignore searching all barrels and boxes.
3-Use the toys in battles to make them shorter. 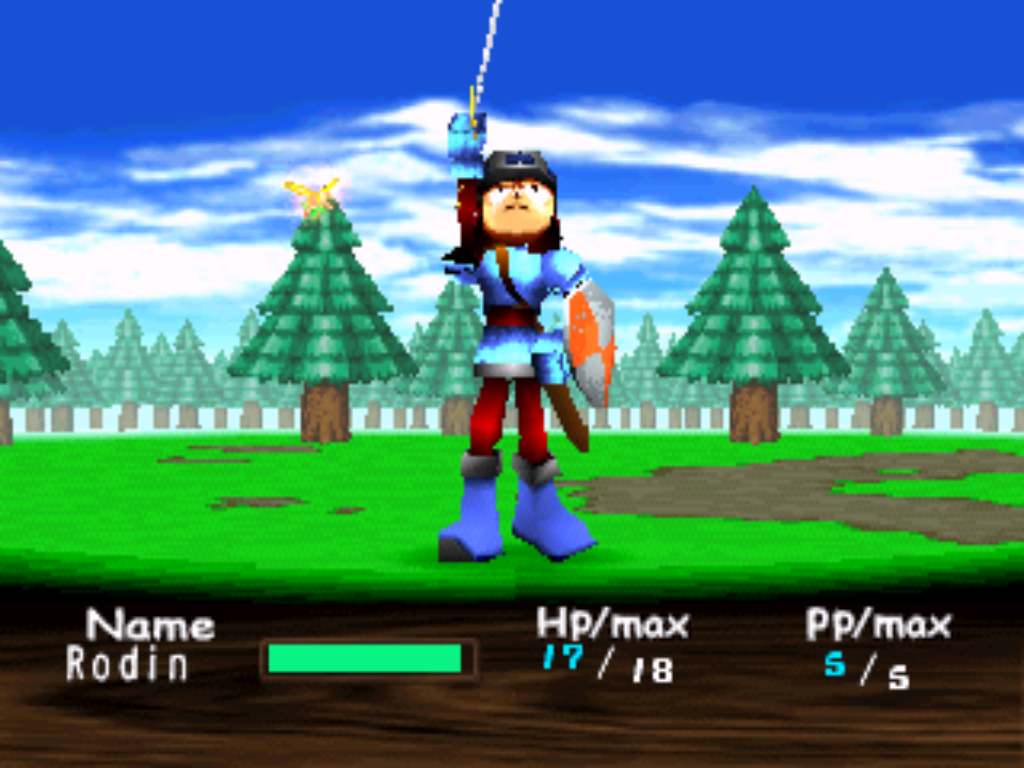 Not much to celebrate for 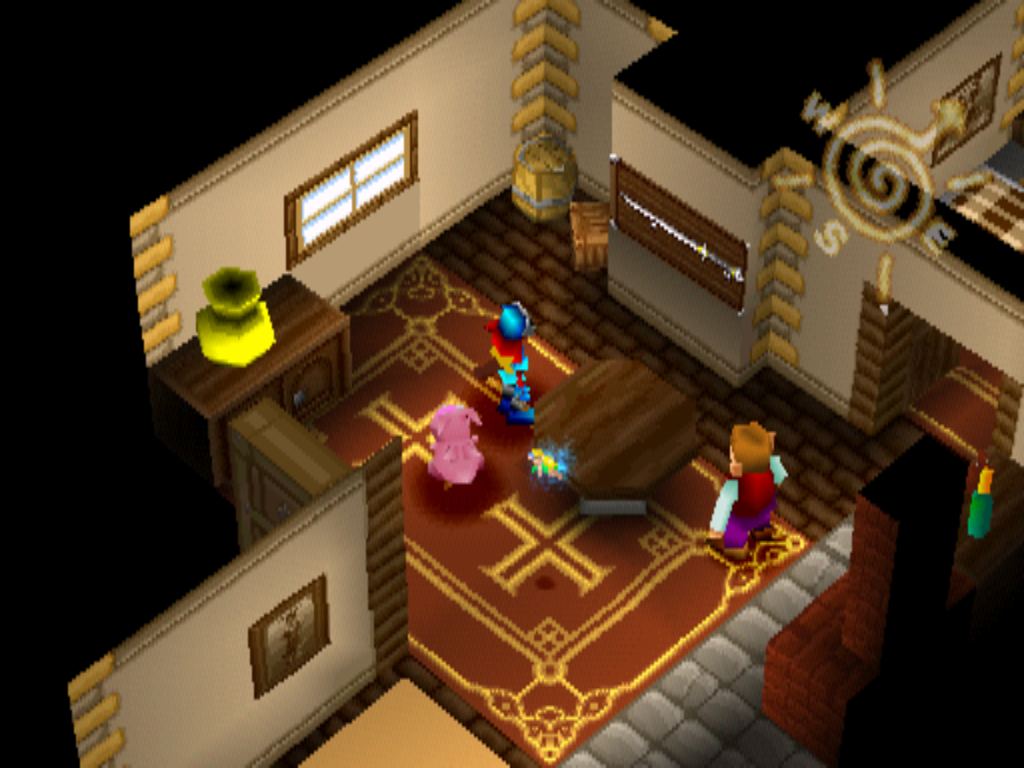 Home interiors are nice by the way

I guess Guardian's Crusade wasn't short and fun after all. At least, it wasn't fun.

The next game I was supposed to play was Chocobo Dungeon 2 which is conisdered one of the better Mystery Dungeon roguelike series spinoffs. However, I realized after playing it for a couple of hours that I will NEVER like any MYstery Dungeon game regardless of which series trappings it uses. As such, I am jumping to the next game on the list which is the extremely wacky game, Incredible Crisis.