3:12 PM on 07.26.2021 (server time)    0
Over these three days I had enough game breaking glitches to end four or five play sessions but I persevered. If you do the same then rewards await. The game is haphazardly delightful. If you've played it you know what I mean.
DAY 1
In this game, the world and enemies are a joint effort to kill you, along with other technical quirks to make survival tough. There has been plenty written on the games development decisions, videos made about it, mods made for it and I still went in with the vanilla game expecting it to be okay.
It's odd to see a game so well produced and still functional and yet there is the feeling it can come apart at the seams if it doesn't like your attitude.
Here is a snippet of what I witnessed before the game gave me control enough to walk.

Despite how it may look these guards had no music while on duty.
When the visual tour that starts the game was over and I did get to play, a NPC talked which made an objective appear on the map and I got into a banged up jungle-cruise car and drove.
The hot washed greens and yellows of Africa was lit pale against the bright daytime and I slowed to a stop within yards of where the objective lay. There was a watch tower and a pile of wreckage, laid across and stacked high as iron fender barriers. The area was sparse, I kept left, where the bushes provided cover, for the most part, not for long. I was spotted, and approached by two guards but I had strafed to the right of where I had been which was where they were headed which also was where I threw the grenade. It wasn't a huge success, because not long after it had gone off was there someone running into that very spot and gunfire sprayed between us. I brought down three more and searched all around for any wounded. I was sick, yellowed blurred vision filled the screen edges, but the camp medical compartment didn't have what I needed. All they had was a some ammo, explosives, a jeep and rocket launcher. I took the rockets, ammo and went back to my car. First play through honour kept me loyal to my own vehicle.

Maybe the designers thought they were all part of a band.
I drove to a place that objective pointed to and whatever transpired seemed to help with the sickness but that was starters luck. I also got cured by a priest because Africa.
DAY 2 I felt let free.
The day started with confident vehicle control with only a hope for the same with gun control.
I wanted to be solitary, singular, present and silent (at first) amidst nature. Me, the earth and my rifle. To thrive in this heat is to compete for better, brighter or the other. Must be a cycle of some sort. So be it and theirs.

Your free starter vehicle. Too close to reality in my case.
I drove through a checkpoint at 65mph, something I would later learn was optional to the player but should be avoided with this game. I accelerated past the first gunner who appeared to be shooting from a window inside a house but when the second spray of machine gun fire made audible punctures in my vehicle I had to exit when the black smoke eclipsed my vision. I got out, crouched, moved, turned and waited... for the enemies to expose themselves. They didn't but their gun muzzles flashed fresh fire out from the green bushes. So that was where I fired at. I moved back for distance and better cover. I never made it to better cover but two green undergrowth flairs were converging on me with bullets so I took out both of them before I got anywhere. I sat still among the greenery for a moment watching my car spew smoke where I had abandoned it and waiting for the enemy music to fade out.
I did not screenshot the sight but here is an image re-creation of the scene. 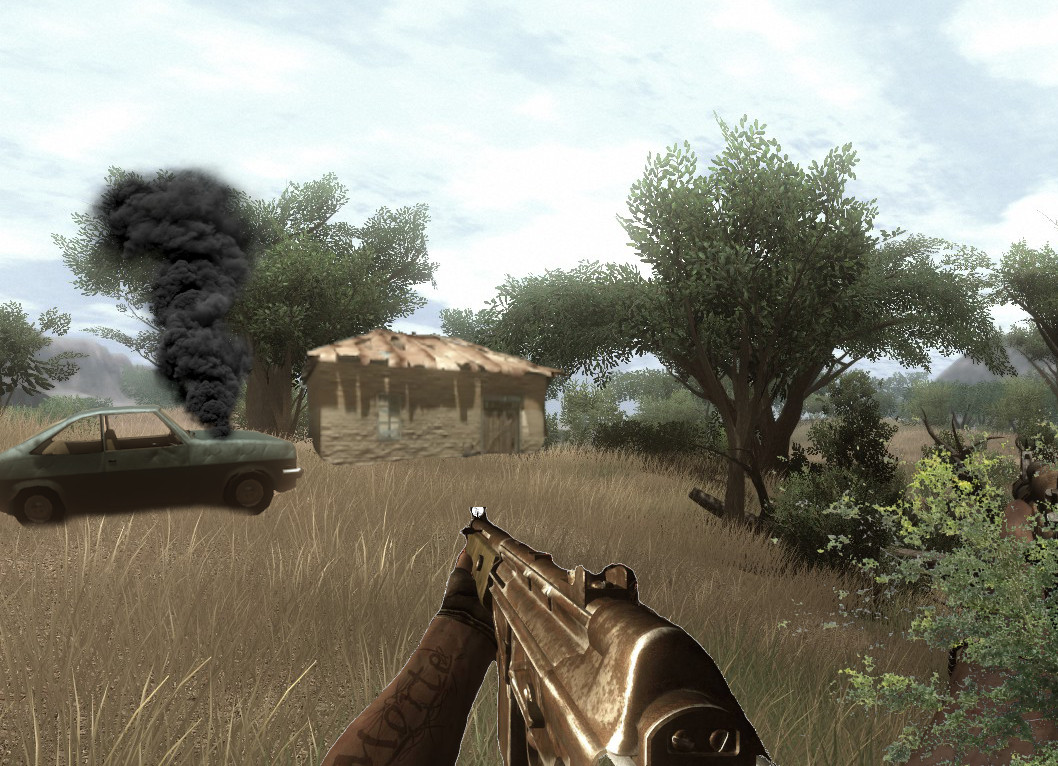 Not actual gameplay footage pictured.
When the quiet of the African greenery returned, a small notification flashed up saying 'You can now use this safe house to save'. Happy f**kin days, I thought and went and used it. When I saved and then exited, I rounded the corner thinking about car repairs and where I could find and kill for a jeep when I got shot. Gun fire was made felt and heard, it pushed out all thoughts. I whipped out a shotgun and one shot killed the crouched enemy. As I stood where I had stopped after he had died, I wondered from where he had followed me and I then knew I was going to need the realism enemy mod.
DAY 3
I got my next mission from a hovering ally who stopped and started her audio if I wasn't standing in the right position, after a reload and careful positioning of myself, eventually an objective got updated.

Don't make eye contact.
The game certainly teased my itching trigger finger and the long drive wound me even tighter. I entered the police area, a dark valley lay before me, lit by dawns early rays. Then it got lit up with fire from what felt like five different directions. I slid down a hill, wounded and unsure about swimming. I swam anyway and found some tall rocks to take cover behind but it only took one bullet to finish me off and that was when I exited the game for the next time.
DAY 3 1/2
Later that day, I got the realism mod, re-did the first mission and the first checkpoint and came back to the police valley, at night as recommended. I stabbed a lookout from behind, blew up another's boat which killed him, and then killed the onlooker. By this stage I felt like a ninja in Africa when several enemies came running down the hill in the dark where I didn't see them and a sloppy nighttime firefight ensued. I ran, crouched, fired and repeated until I was all alone again (my buddy died it seemed) and I realised the objective was still further on, bloodlust had been optional, but I had broken through and felt ready for more. 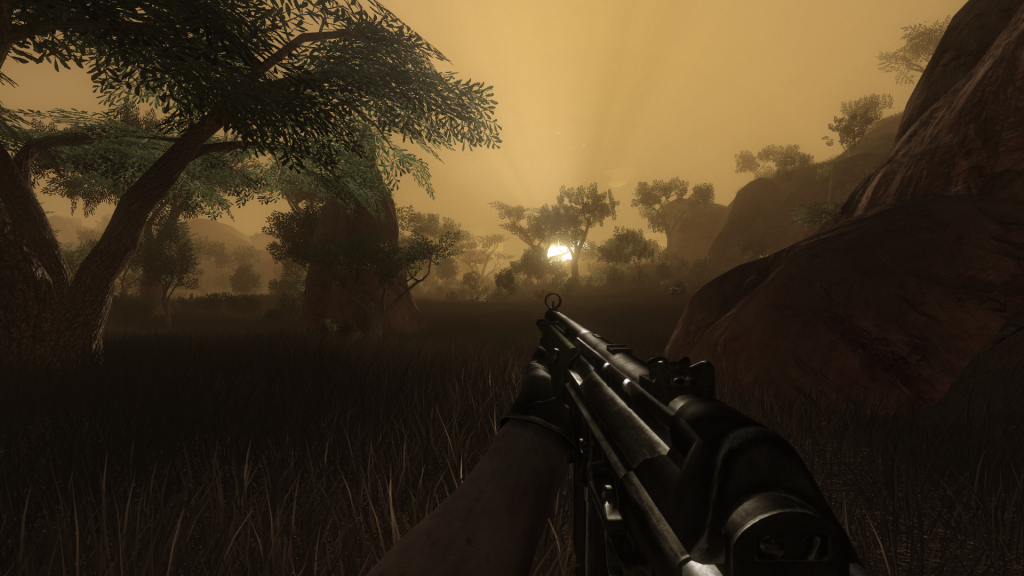 TL:DR Fun game of tough love in Africa that's worth a try. Use mods liberally.
Login to vote this up!