One of the things I like to do in my free time is to watch lists on the Internet about video games. Salt and Sanctuary came into my life last year in one of those without me paying attention to it much other that its title. However, this game kept on showing and curiosity struck: "Oh, my PC can run it. Neat" but I never played here. Enter my Vita where it was the first game I decided to play to completion and while Super Meat Boy took its place, no other game took Salt and Sanctuary's unique feeling of adventure, disgrace, and challenge. It had happened yet again: its name enamored me. This is Salt and Sanctuary.

Honestly, there isn't much to say here. The ship where you a sailing and is transporting a princess for her to get married at all costs on gets attacked by some bad guys and a monster. Simply defeat them and make your way through only to be wiped out by said monster, or not. From here on in you are now stranded on an island that only wants you dead. Between wanting to know whatever happened to the island and what exactly is going on to talk with the somewhat hidden NPCs is needed and also, another playthrough. Salt is an important factor for almost everything in this game and each sanctuary is where one can find peace amongst all the chaos. To make one's way forward is the only option.

SKA studios might have few games in its catalog but it was this one which made them known to the public. At such, the studio is composed of few individuals in the case of this game, only two took the helm. A couple, to be precise. This may be the reason why everything in this game looks so peacefully crafted despite the obvious opposite nature of the game itself. Hand drew characters and animations, superb boss design, and a scenery that speaks for itself once one finds out by certain NPCs why the island is composed by such a diverse flora. Haven't said this but the game is entirely in 2D and then again, these animations give the game a level of deep that remind of classic titles such as Final Fantasy VI. The lighting, oh the lighting is so well implemented in this game.

For a game that doesn't reveal your true name as you are a mere avatar put into the island to suffer, the only voices you'll be hearing are those of your wounds and the those of the enemies and bosses. However, whereas there isn't a soundtrack present for the majority of the game per se, is the sound design and the sound effects that really shine over here. Again, the deep that was crafted in this 2D game is so big that those tiny sounds mean life or death in most cases. For example: one can figure out can kind of enemies lurk in the next area, if there are torches turned on or whatnot. Two themes that do come to mind are the one that plays during boss battles, and the final level one. The latter is, once the games story is revealed, truly meaningful.

As said above, to move forward is the ultimate goal in this game. To this end, the controls are simple: attack, cover, roll, and jump. Following this premise to face the game's various locales and their respective bosses is to be expected, and this is where the game really shows its true potential. Did you explore enough to have enough force power to the monster that guards the exit to the next area? Will you test yourself in the dungeon to level up to the point of OP? Crafting is essential and it all takes place in the sanctuaries. For example, one can change equipment and improve one's gear as well as buy items and do other kind of customization. At this point of the game, the poetry behind the game's name plays it part beautifully because the salt that is present throughout the game and that ends up in your hands with every enemy you defeat becomes the resource to level up. So far, all of this seems simple enough: make your way through, level up, kill the boss and move on, but this game was inspired by the Souls series so, it won't be easy at all. 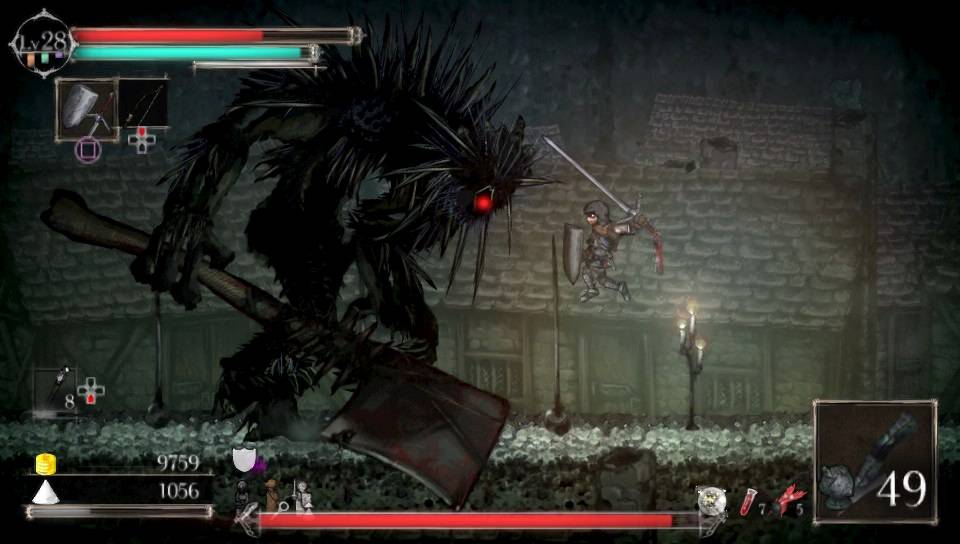 Extra input over here: this is my first Souls game and also, the first one I got a platinum on the Vita. Why? Well it turns out I love being a masochist in gaming so this game hits home. What started as a playthrough of just getting to the final boss and that's it turned out into a: "I need to know the rest of the NPCs, try those hidden boss fights, and kill that bastard at the beginning of the game" Said and done. It took me over three playthrough and 34 hours but it all was worth it.

For starters Salt and Sanctuary may seem like just another Soulslike game but in 2D trying to be relevant amidst the plethora of games like this out in the market, but it isn't. While the similarities and obvious, the end result is but a game that creates its own role and while everything is not very clear at first, the gameplay is reason alone to find out what exactly is the player getting into and most probably, fall in love with it. Truly a piece of love from gamers to gamers.