The immersive sim is a genre that can be somewhat hard to pin down. Characterized by its systems-driven emergent gameplay, they tend to be hard to market and often struggle to achieve commercial success. The "immersive sim curse" is something of a running joke among the devoted community of enthusiasts that flock to these games. In the AAA space they appear to be drying up for good, with the studio behind Deus Ex working on a Marvel property for the foreseeable future and Arkane Austin, a team with storied imsim roots, recently announcing what looks to be a co-op vampire shooter (though fingers crossed that this turns out cooler than the initial trailer lets on). And speaking of vampires, Bloodlines 2 is looking worrying to say the least.

One bright spot for fans to lay their hopes on is the emergence of the indie immersive sim. With games like Nightdive's System Shock remake and New Blood's Gloomwood and Fallen Aces on the way, a new trend appears to be taking shape on the indie scene. Can this genre find a new lease on life and break the curse for good?

Cruelty Squad, the debut FPS from Finnish artist Ville Kallio, is an indie immersive sim that revels in the very idea of being cursed. 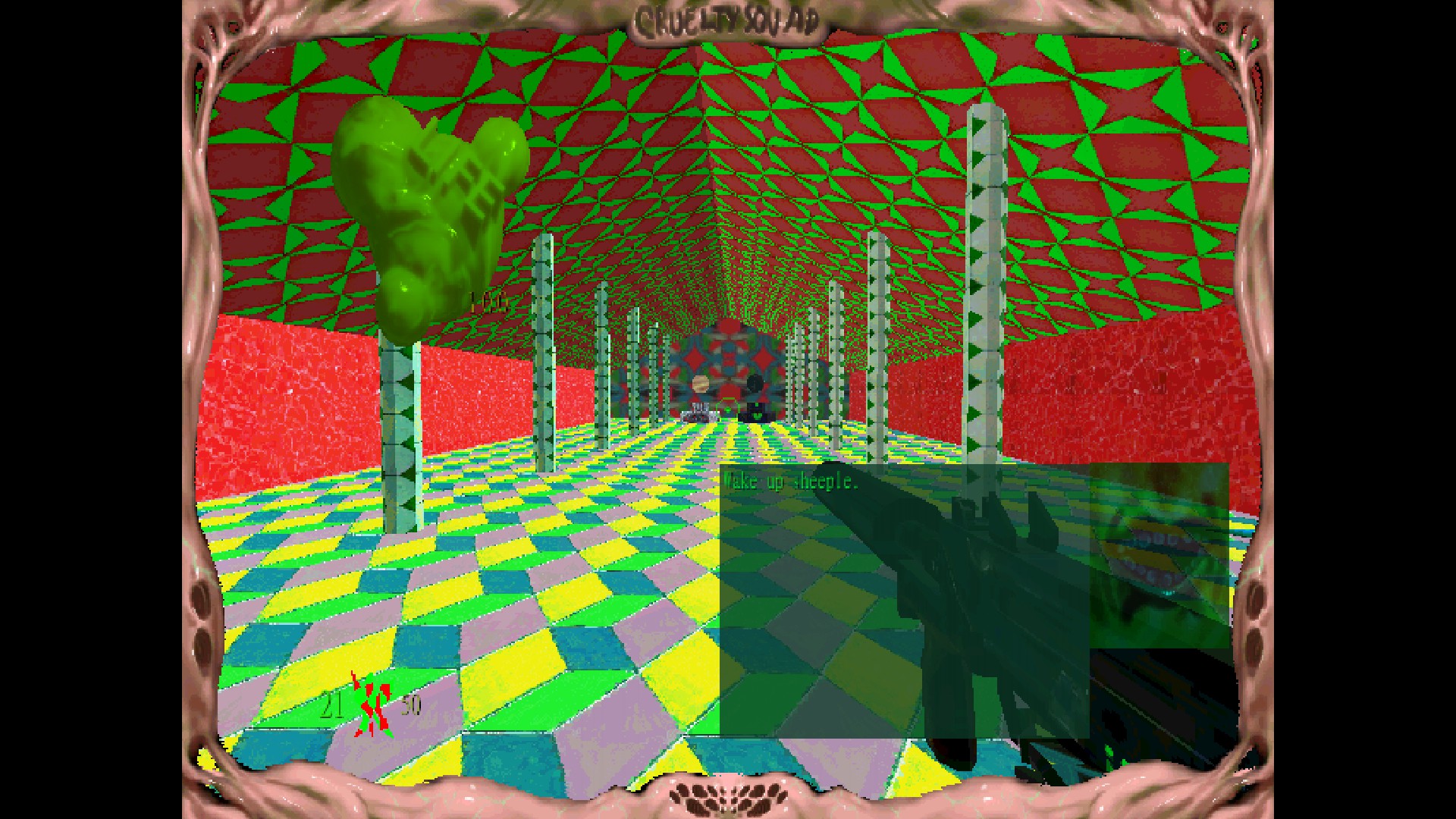 I heard the 640x480 resolution was passed down to us by God. It allows you to see the unseen.

There was something bold and exciting to me about Cruelty Squad simply in how transgressive it looks. Nearly everything about it functions as an alienating assault on the senses, as if it is just daring you to put up with its strange cacophony of colors and downright ridiculous textures. What exactly is this hideous FPS that describes itself as an immersive power fantasy simulator?

Well if you ask its creator, he might tell you it's the spiritual successor to Mario 64. If you ask players, you'll find it has been picking up comparisons to Hitman, old school Rainbow Six, and Deus Ex. You'll probably see the word 'cyberpunk' thrown around a lot in conversations about this game. It's a genre that has rightly prevailed over time as the de facto vision of near-future dystopian society. Cruelty Squad however can be more aptly labeled biopunk.

That is: a sickly, pulsating, biotech-corrupted fleshworld wrapped in an inexplicable layer of Gnostic mysticism. The world of Cruelty Squad is a deeply flawed hyperreality where your body and humanity are holding you back. The one true path to divine ascension in this world is to climb the corporate ladder. You'll find those who managed to achieve this godlike status have been stripped of their humanity, preaching their new age babble and amoral edicts in equal measure. You are helplessly ruled by the archons who serve as the authority on life and inflict the necessary levels of punishment to the lowly sacks of meat whose sorry lot in life is to do their bidding. The true nature of this world is laid bare in front of your eyes: now ascend or give in to bitter failure. 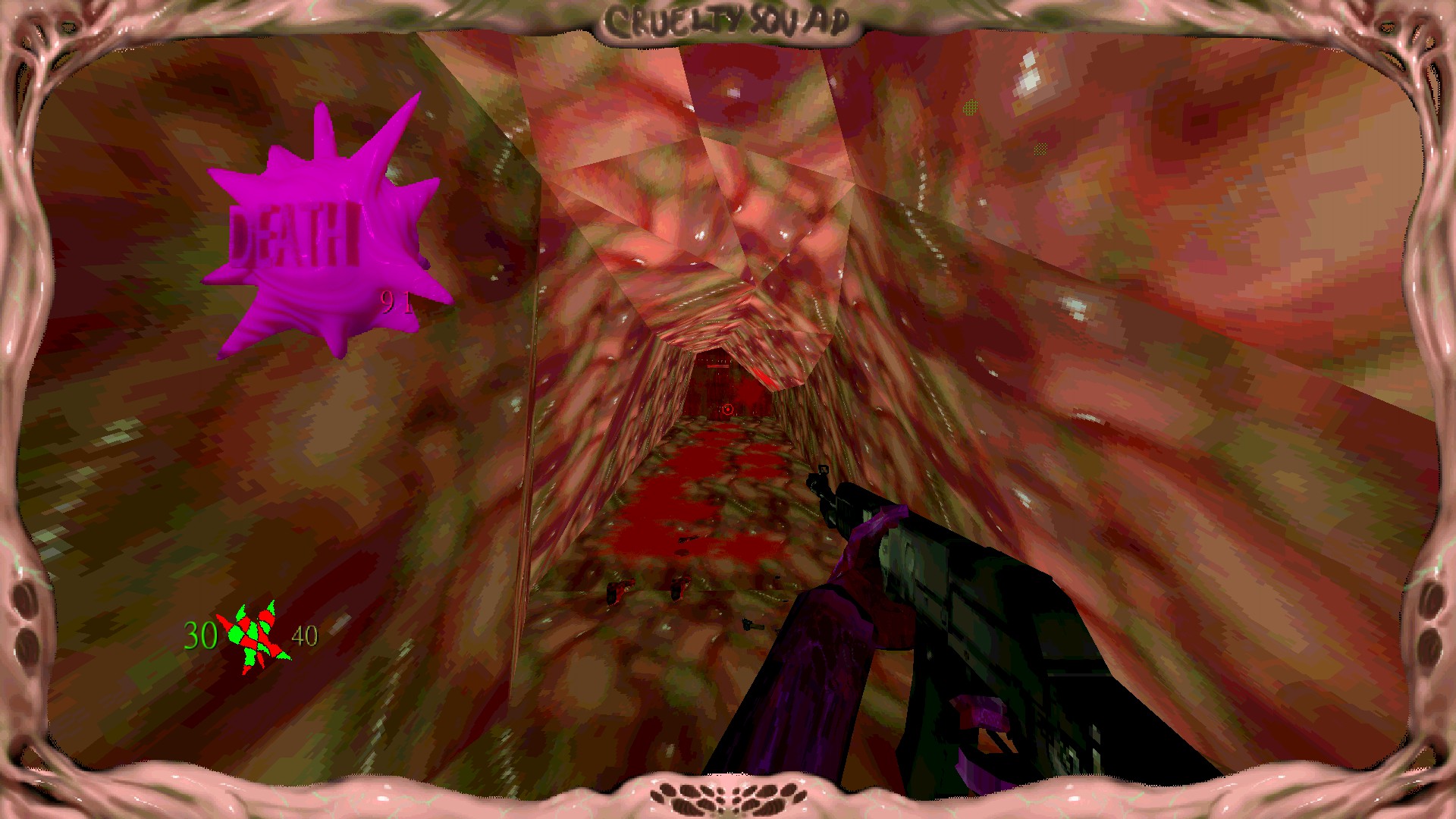 This place is full of incredible oozing and pulsating holes. Just what a guy like me needs.

You play as an unnamed empty fuck employed by corporate liquidation firm Cruelty Squad. Think of him as your standard gig economy grunt feeding from the lowest rung of the economic ladder. You are tasked with performing wetworks for a long line of powerful corporate and political players. You might find yourself aboard a sovereign cruise ship littered with tech bro biocurrency speculators whose monstrous bioslaves serve as their only companions. Or maybe you'll be dropped into a sprawling suburban shithole built on ancient burial grounds and guarded by armies of private security goons.

Your mission is clear: kill the designated target(s) assigned to you by your revolting blob of a boss. This often means gunning through a level until you reach your target, but it also allows for a healthy degree of creativity. These levels are extremely replayable, with multiple paths available and an ever-expanding toolset at your disposal. After completing your objective, it's on you to exfiltrate the level without getting killed. There are no mid-mission checkpoints or save states here, which only gives more incentive for experimentation should you fuck things up.

Navigating the meaty level design on offer is an absolute joy. If you're anything like me you'll be peeking around every corner combing for secrets and soaking in the beautifully realized garbage world. There is a lot to discover in these sandboxes. From unique dialogue to special upgrades, secret level entrances, hidden areas made accessible by an enigmatic divine tendency system, and an array of distinct weaponry which can be added to your permanent arsenal by successfully exiting the level with gun in tow.

There are also experimental weapons which interact with the world in surprising ways. A lot about this game feels like an experiment. Even your standard melee is the most powerful kick I've ever seen, instantly launching your target out of the level or perhaps rendering them to a sloppy pile of mush. You get the sense that it was done in development by accident and then left in just because it's cool. 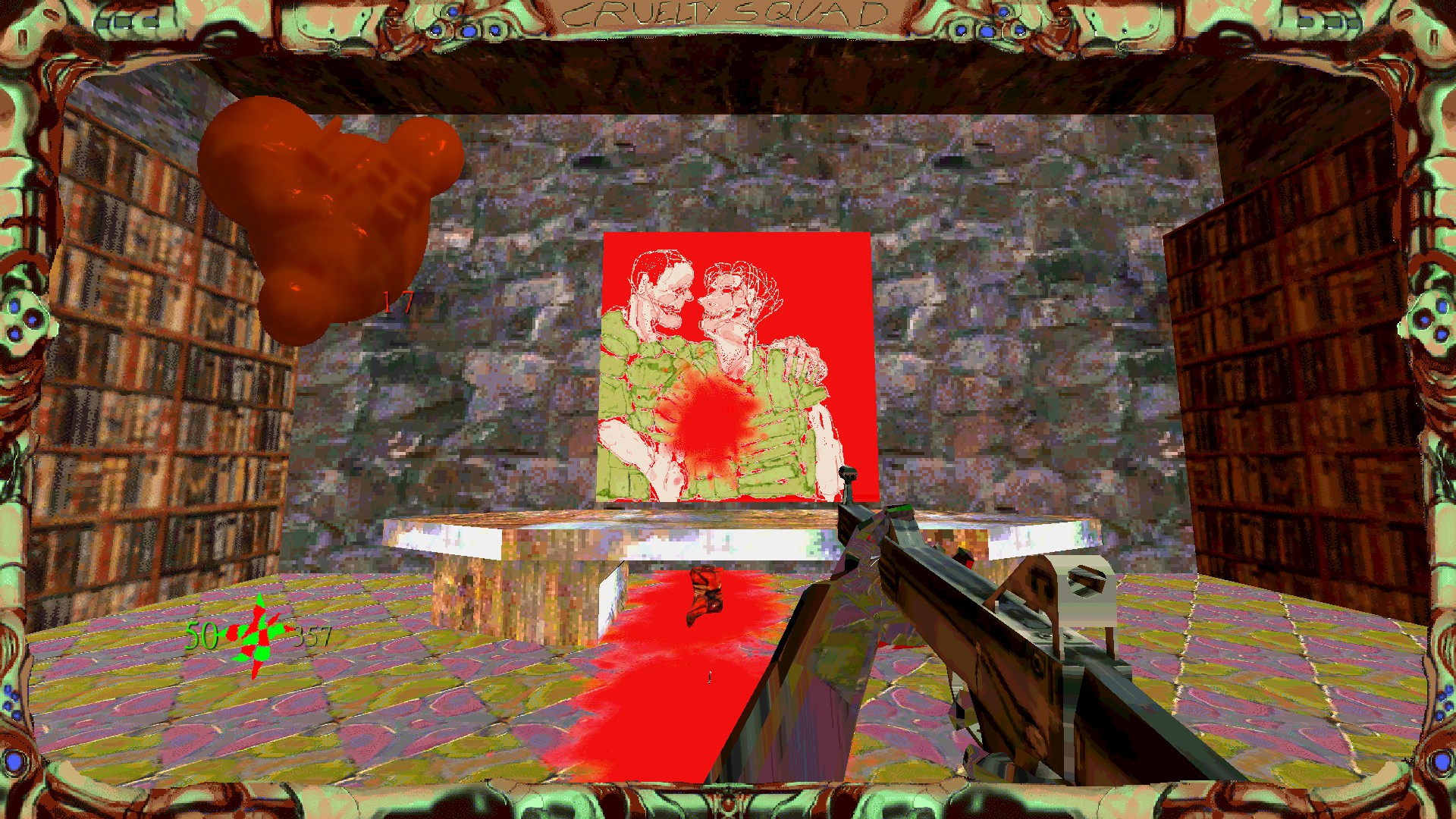 The upgrades are similarly fun and fucky. One early fan favorite is the grappendix, a level-breaking intestinal rope that allows you to grapple onto nearly any surface and swing around like a mad man. Others serve as a more modest utility, like the double jumping gunkboosters that shoot hot smelly goop out of your putrid ankle holes. Whatever upgrade you're packing into your flesh, you can rest assured knowing it will make you a more well-rounded dehumanized wreck of an efficient killer.

In order to obtain most of these upgrades, you need cash. Cruelty Squad's economy is handled in a rather creative and thematically interesting way. It's 2021, life is hell and money is fake, so what better way to carry your livelihood than to keep all your assets tied up on an extremely volatile stock-and-organ-and-fish market? Yes, this game has a stock market sim...and casual organ harvesting...and fishing mechanics. It's up to you to invest wisely in the sacred name of pragmatic economics. This feature was added into the game not long after the GameStop stock fiasco, if it weren't already obvious that Kallio gets his inspiration from the more absurd excesses of the world around him. I genuinely don't think I have played a game more in tune with its times than this. 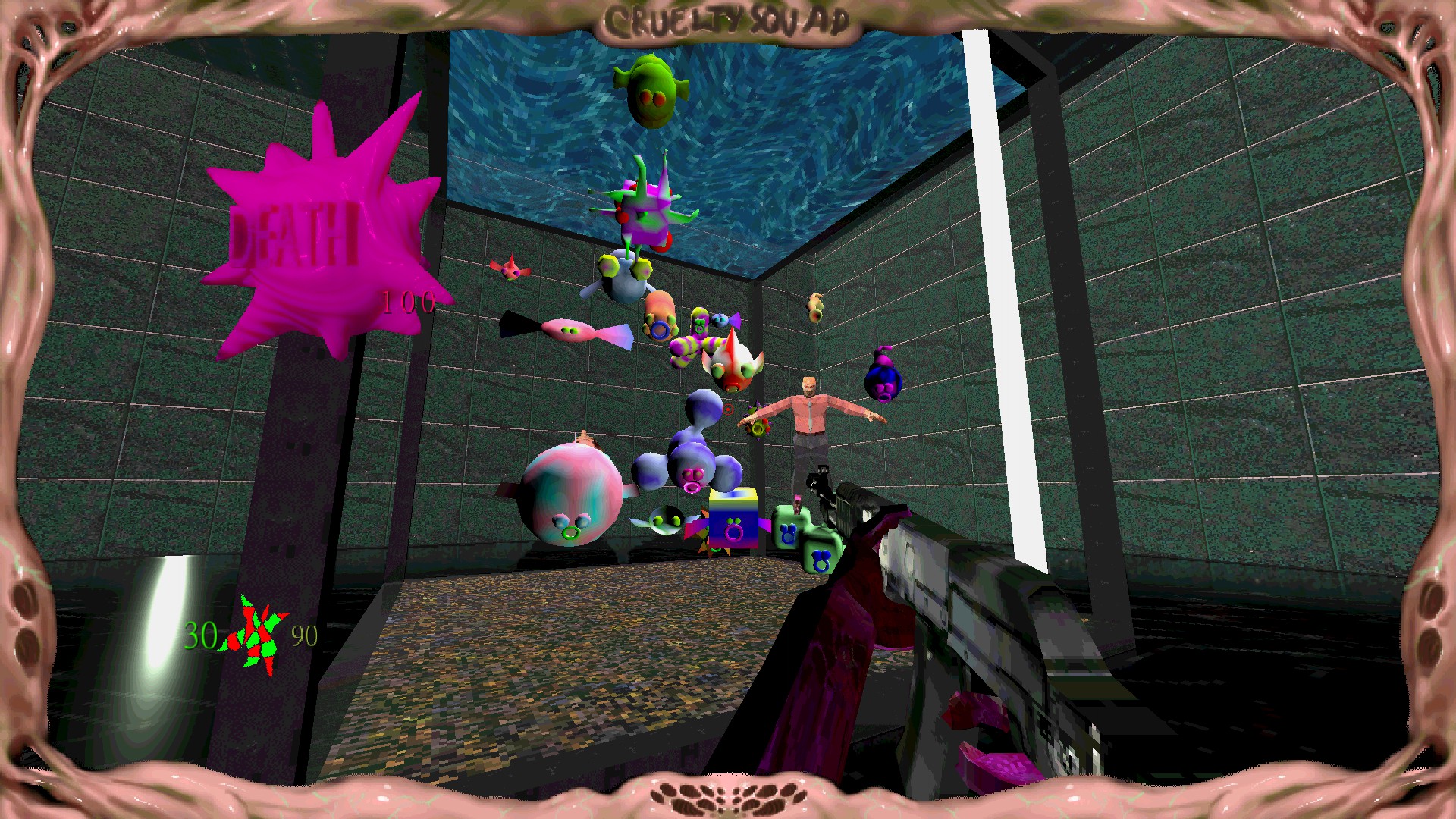 You invest in the stock market? I'm impressed.

Cruelty Squad comes out of early access today, and with it we are entering a renewed phase of late excess. It seems to be something of a passion project for Kallio, who has been slavishly updating it with generous content drops since the start of the year. I'm sure he will be taking a much deserved break, but don't be surprised if the updates start rolling in again. I have a sneaking suspicion that this game is a sorely needed outlet for the sewer of ideas and anxieties swimming around in his head at all hours of the day.

I hope it makes him into the type of person he was always meant to be: Financially successful. Desirable. Multi-millionaire. Some people are born winners (not me). The archons have willed it. Dehumanization engaged. CEO mindset.

Take it from me, or the growing community of freaks and fans cultivating around this game: Cruelty Squad is worth obsessing over. It's a game I've spent twice as much time thinking about than I have actually playing, and I've played it quite a bit. If you are at all interested in playing something genuinely different, I urge you to pick it up. It is begging to be discovered and obsessed over for years to come.

Cruelty Squad is available now on Steam for $20. As developer and self-proclaimed CEO of Consumer Softproducts Ville Kallio puts it, "please purchase if you want to support me as an artist, a human wreck, and a person of business."

My name is Tayne. I live in a shack with my large son Roy.