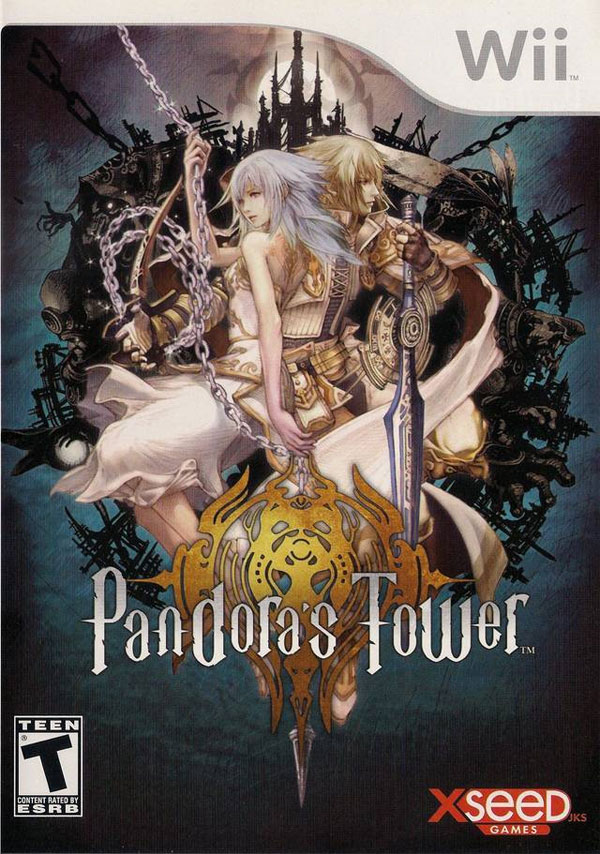 Following Operation Rainfall success to bring three Wii japan exclusive games overseas, Pandora's Tower came out as the most rare of them all, which led it to be overshadowed by its older brothers as in some places this came out in 2013. Opting for an anime like narrative of the 90s where damsels in distress were all the hype and few characters were needed, this game came to existence proving that indeed such a strategy may turn many people down but once given a chance, it shines with subtle touches that change everything. This is Pandora's Tower.

After a fabled opening that sets everything in motion despite little to no information as to why our characters were put into such an ordeal, Aeron is introduced as the knight in shining armor who sets out in an adventure. The plot revolves in doing what needs to be done in order to save Elena, a singer who has been cursed with a decease that will slowly but surely turn her into a monster from the inside out. To save her, Mavda and her husband (who is practically a giant pot with a face and arms hanging on Mavda's back) aid our protagonist with magic and by sharing with us of a tale that can befall from time to time, this being the curse that has befallen our dear Elena. Not taking any chances as our damsel's body is deteriorating, Aeron goes to where he is asked to: The Thirteen Towers in order to defeat some monsters called masters, retrieve their flesh and feed it Elena to cure the curse. This isn't something to be done just once, however, as the quantity of the tower implies more master flesh is needed to fully cure the subject. To go to each tower is what our hero needs to do to put an end to the victim's suffering, or is it? As the story progresses, curious findings are hinted and/or revealed to confuse the player. One just needs to remember the first task at hand and move forth. If not, be ready to witness different endings and not the true one. 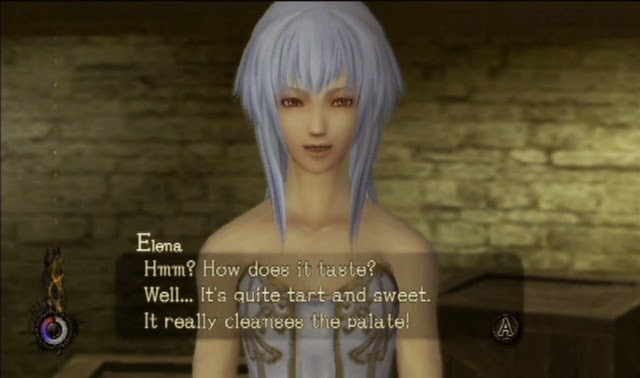 Talking to Elena reminded me of the beauty of innocence.

Ganbarion was a video game developer unknown to me until I played this game, and that is because they had only worked in games adaptations from anime, hence the heavy Japanese influences. Having said that, working with realistic graphics was new ground to tackle for them and given the hardware limitations of the Wii by a game released after 2010 for such console, I can say they nailed at giving their best. Granted, there are blurry textures here and there and some frame rate drops during some combats and even during story segments are they happen using in-game engine graphics. There are hand drawn story cut scenes as well that only adds to this game's beauty. As stated before, few are the characters we are going to encounter during this adventure and so the detail they expose is actually good to look at not because of the beauty they can represent (yes, that giant pot is cute) but that actually they go with the game's atmosphere. Elena is a beautiful girl you don't want to be turned into a monster, believe me. And even still, her beauty shines amongst it all. Sadly, there's no camera control which hurts the game a lot.

In 2021, Xenoblade Chronicles had me introducing 'Best Voice Acting' for my Retro GOTY Awards and just like that, Pandora's Tower is the reason why 'Best Sound Design' has been introduced as well. Seriously, to compensate the lack of beings interaction in this game, the sound designs for every movement is done so well that each travel to a tower feels very much so: adventuring into the unknown with only our footsteps, hits taken, jumps and whatnot that we are faced with. And if that wasn't enough, the voice acting fully embraces the fable nature of the narrative with Elena being this innocent yet flawed girl moved by love, Mavda being this sage whose sarcastic input is very much needed and Aeron, who despite doesn't say much, his will is there. 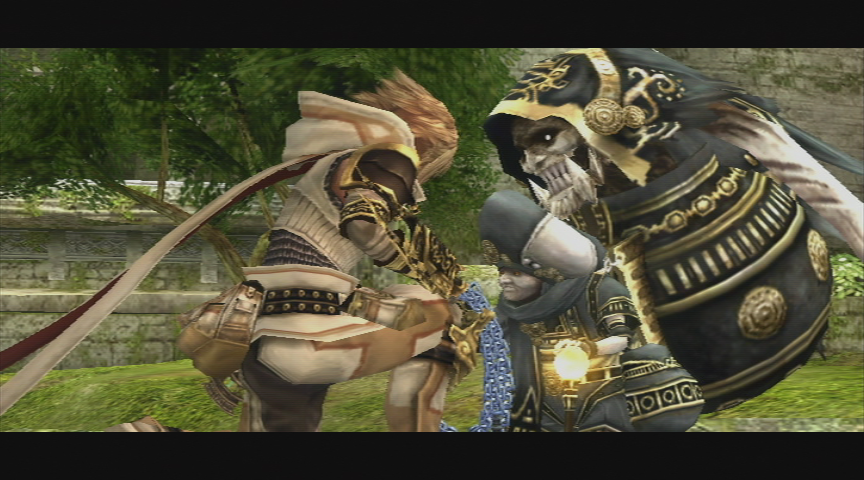 If having a game that relies on proved tropes to work turning people down wasn't enough, its gameplay may be yet another reason why this happened. Pandora's Tower is a mix of platforming, action adventure, dating sim, and time management. Weird, right? I thought so too and yet, the game switches itself gracefully between each section leaving only the time management mechanic present throughout. For starters, going into towers to defeat monsters while making our way through would seem the best thing to do and actually the only thing needed to continue the story, and while this is indeed correct, it is not everything. Mavda says that the bond between Aeron and Elena must prevail and be strong amidst all odds, so taking care of her needs more than feeding her automatically each time a master is defeated.

Here is where the dating sim takes place. Bearing in mind that as time passes Elena will be becoming a monster, one must visit her before the indicator turns blue (she has transformed) to feed her and spent some quality time with her. Seems simple in theory but in practice is a whole new story. One cannot stay with her for long as interactions are limited (pretty much like in real life that one cannot do the same thing with one's partner repeatedly day after day as love would fade) such is the same in this game. Thus, back to exploring we go. Fast travel is an option but it's locked to the use of items that aren't easy to find or create, making our time management within the game a real challenge. Will we forsake Elena's wellbeing following our mindset that she will recover either way after eating the master flesh, or will we visit her often so that she doesn't feel alone in her despair? Though choice, indeed. 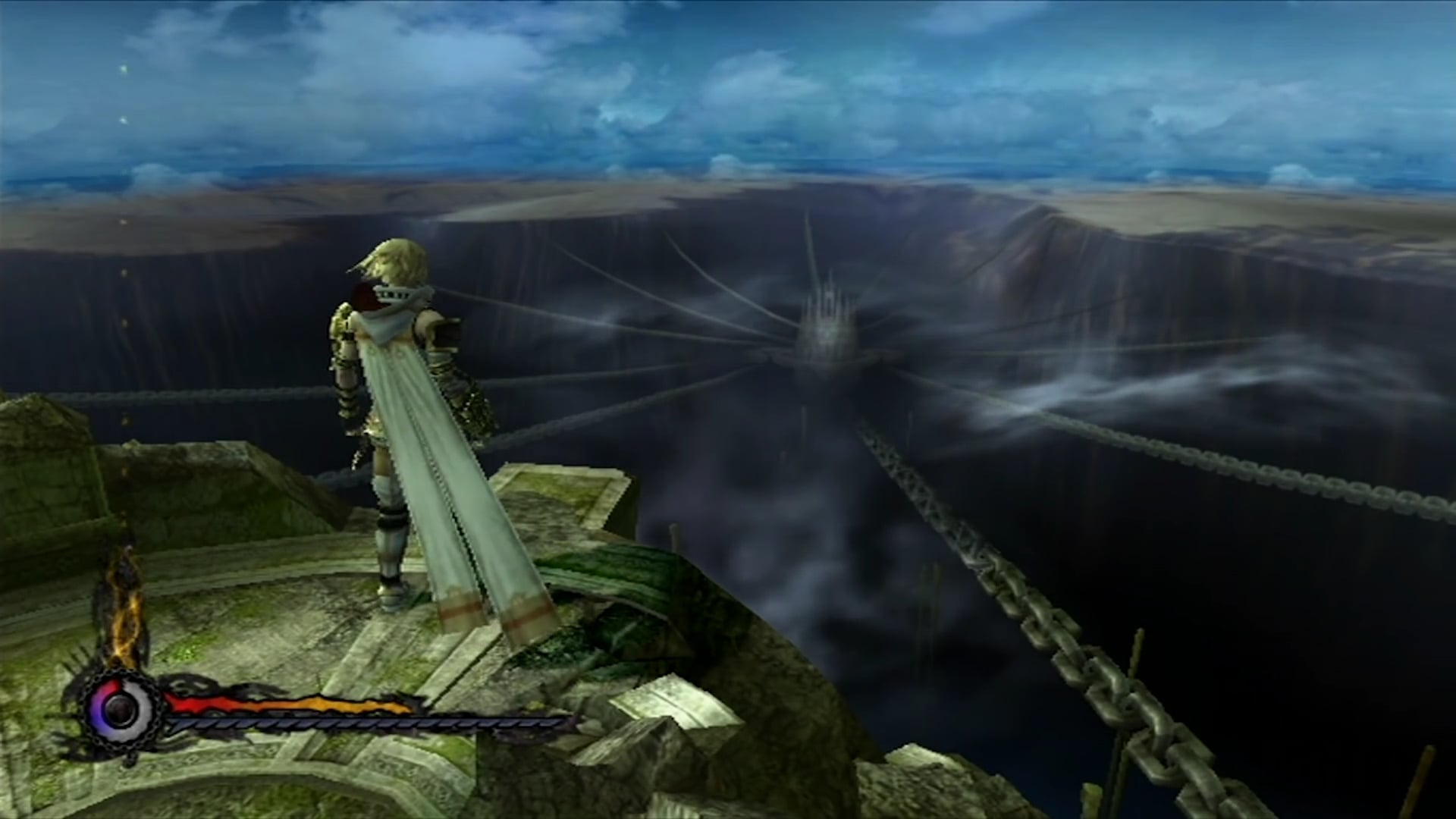 As for the remaining gameplay elements such as platforming and action adventure, both are done beautifully. Each tower has their own puzzles and platforming sections to solve in order to reach the master, but there is a twist. One needs to unlock the entrance to each master lair by destroying chains spread throughout the towers, as only making our way through to said lair won't mean anything if the locks are still there. Combat is short and simple: just beat the hell out of enemies or steal their flesh to feed Elena but be mindful of your equipment as it deteriorates over time forcing you to go back to go and talk to Mavda to fix them, while doing some shopping and crafting if necessary. I can say that time management blends with object management here, and it works just fine. As for the masters which serve as this game's boss battles, here is where the gameplay shines best. Using Aeron's signature weapon which is a chain, one must hurt these monsters for them to reveal their flesh prompting us to swing our Wii remotes to grab it and then pull it out at full strength. Yes, there is a gauge that tell us the amount of life we will deal them so the more the gauge is filled, the greater the damage and as such the satisfaction of pulling our hands in the real world. This makes the boss battles the most desirable moment of each tower like: How will this battle be? As each battle feels like a final boss one due to their originality, execution, and lasting appeal. Marvelous. 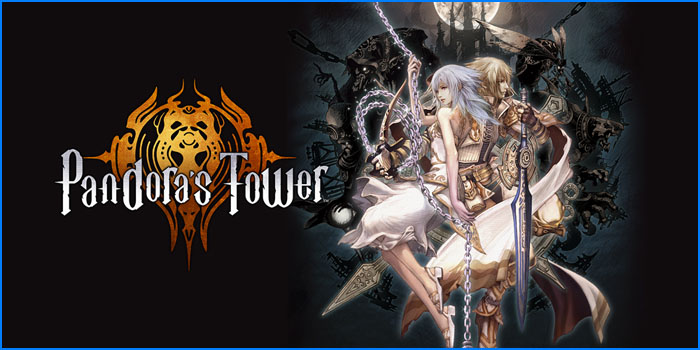 Being this the first game Ganbarion released trying to do something new and original without forgetting their cultural references, Pandora's Tower is affected by the team's vision. Affected I say? Yeah, but not in a bad way because this game serves as yet another reason not to overlook any kind of art from any medium due to the background they might have. I, for one, don't like anime that much or when any culture clouds a product too much making it hard to grasp for the general public. Such is not the case here. Take Dragon Ball (anime), and Parasite (korean movie) both products of their culture that went all out to deliver a message they believed only meant something for their demography but that actually applies for everyone. Pandora's Tower did just that, relying on working Japanese tropes to remind us of the importance of love, loss, and acceptance. Available on Wii, and on Wii U through Virtual Console.