Valkyria Chronicles was exceptional ....for me 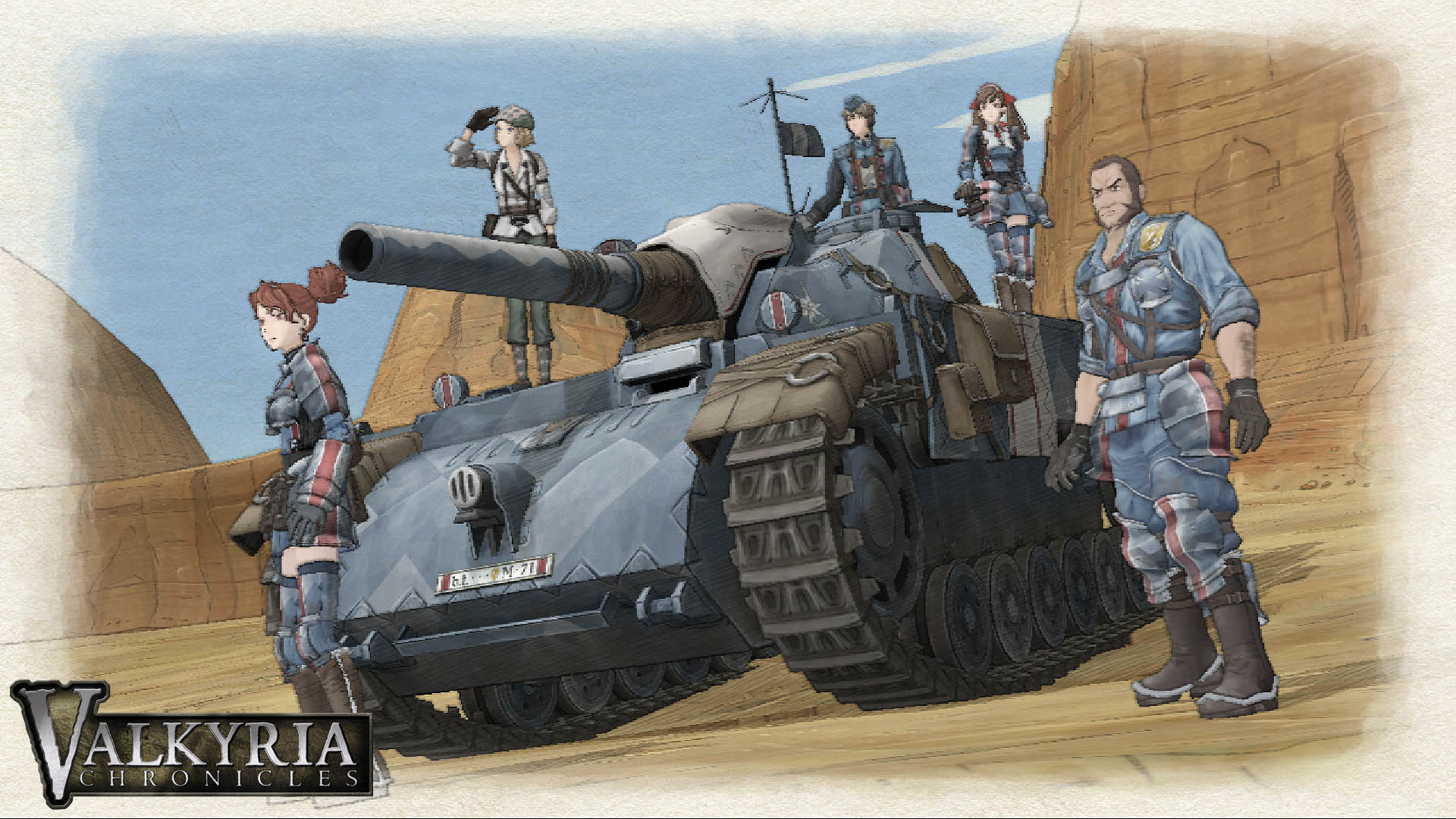 Have you ever played a game in a genre that you've had no natural draw towards? Either a new genre or one you never found any joy or progress in. When you gave a game a try because it looked like the right aesthetic for you. I was lucky to rent Valkyria Chronicles and it wasn't my choice, the sibling who I have to thank for the arrival of this game knows the debt I owe them. I was the only one playing it after the first day it arrived and I was still the only one playing it a week later after I had extended the renting time. A joyous week of commanding a squad through every explosive battlefield until the 25 hour mark wrapped it all up. The reason I bring this up is because I had several fist pumping moments of success while playing this game. No one else was there to see them. I have since bought a capture card.
You see strategy games are not my thing. Mainly due to being bad at them. I will try out SRPG's, meaning I've been burned at Fire Emblem and with RTS's I've been laughed out of the room in C&C:Red Alert. But with Valkyria Chronicles I could tell from the outset, that someone like me could progress. This was a game that seemed to blend turn-based tactics and real-time strategy effortlessly, or just the way that I wanted it at that time. A top down tile-based tactics game this was not. 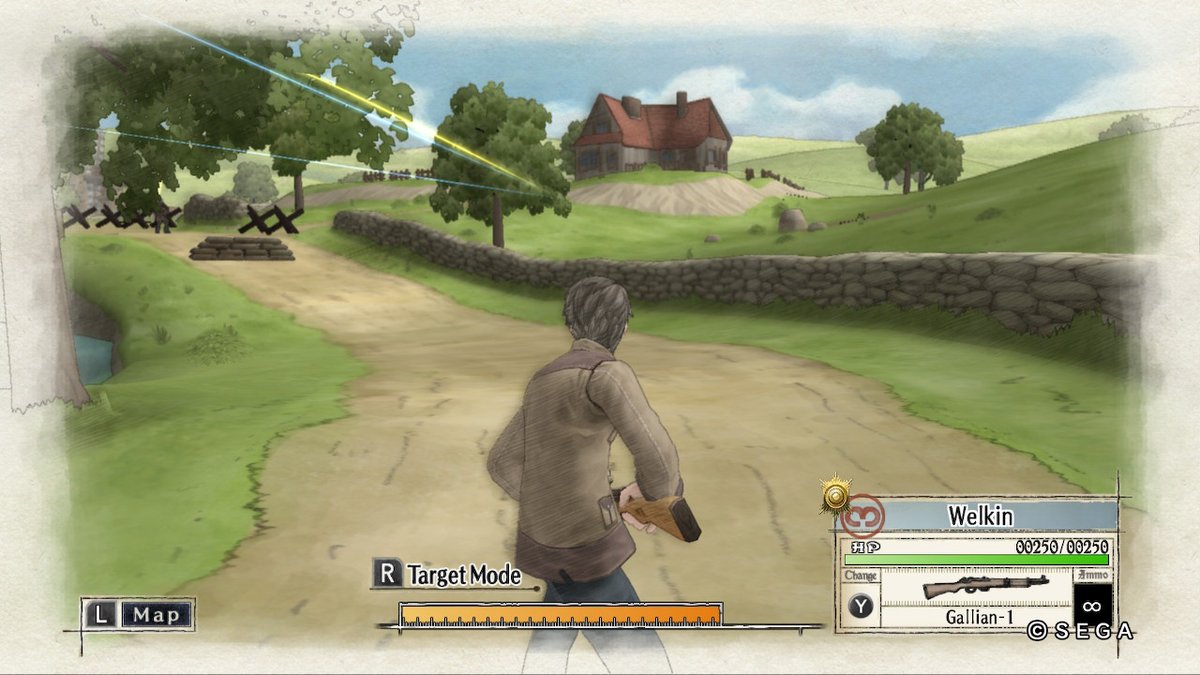 Before this game, all that I had experienced was Advance Wars and while I loved that game, I never got even half way through the single player campaign because at the time it proved too much for me. There are many I'm sure who could debate the game doesn't build upon anything already done in this genre but this was, for me, the perfect transition into 3D real-time strategy combat I needed.
There had been little pieces that had already peaked my interest. I'd always wanted to play Valkyrie Profile on the PS1 but localization was my barrier (unrelated series, but I didn't know at the time). The cover art and screenshots showed an anime & comic book influence but with a more gritty wartime setting that was closer to our own world than the high fantasy settings of others. All of these things had nudged the game onto my radar and about 8 months after release it fell into my playstation by itself and I fell head first into what it had to offer. To say it was accessible was an understatement. 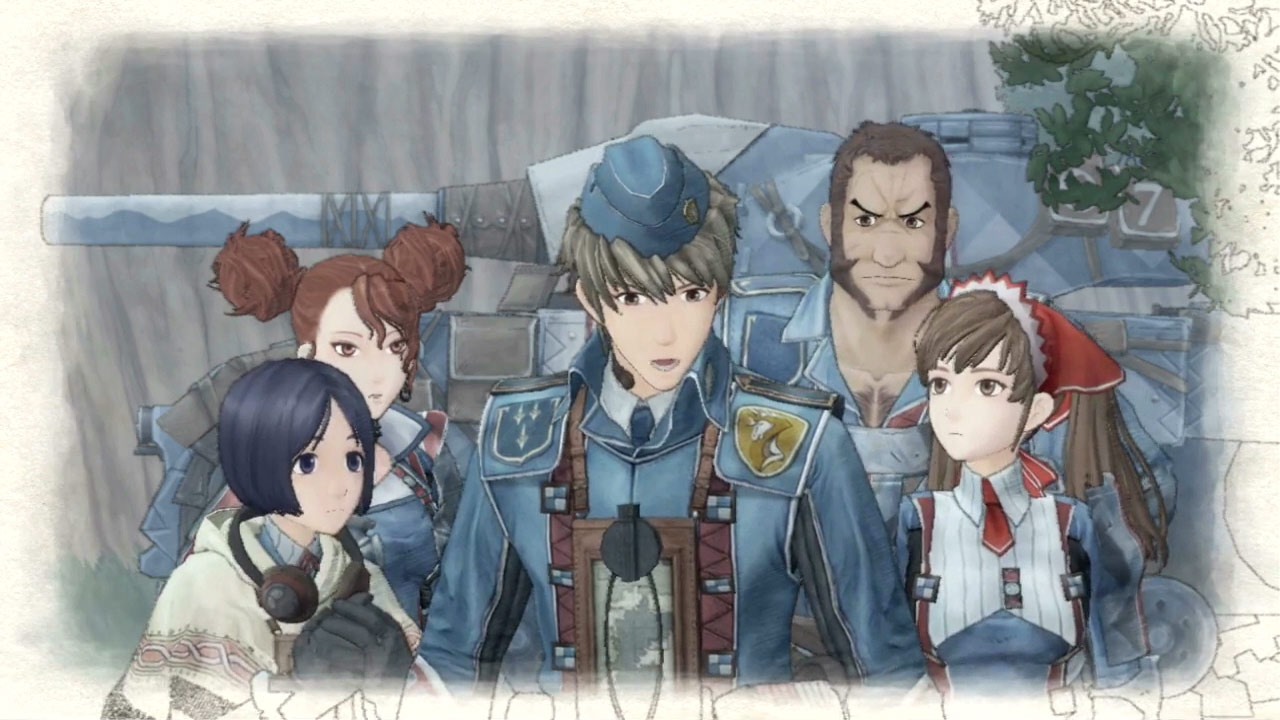 I was a stubborn and pretentious gamer in my teens and believed tedious gameplay was worth the time and chewed fingernails to see the story wrap up. But the story was not the highlight here, it was serviceable with characters interacting to expected degrees, a plot with political and anicent magical ideas along with racial segregation. You follow Welkin as he commands a tank and Squad 7 off to encounter romance with betrayal and high stakes where you appear as an underdog in a massive nationwide conflict. Here was a game that made all these story things appear trivial because I was having too much fun with the game. The overly emotional cutscenes never annoyed me, the crazy anime trappings never took me out of the experience, even the more grounded and toned down war story with only a pair of magic superhumans should have been the story I was looking for. However, all of these things were eye pleasing icing but they did not invest me further. I was always happy to get to the next battle, outsmart the next challenge and adapt to the latest mechanic. Sometimes a story event would happen and the greatest reward was that it had an effect on the gameplay. I always thought an engaging plot was the way to my heart and continued investment if the game's genre was not my natural playground. Here I found a shorter runtime compared to other, similar games, to be refreshing, the focus on the core playable characters carried me along the story, all so I could get to the next mission which much to my enjoyment gradually got more intense, wartime and challenging as the game progressed. One particularly memorable mission being late in the game where you are pinned down under fire and you have only an overturned railcar as your source of cover from the shower of bullets aimed at you. I soon became adapted to the games third person shooting, learning where to put the retical where I was soon almost always being rewarded with a loud *ping* of having scored a headshot. I wish I could have seen myself play this game through my family members eyes, it was engagement like no other. I had some serious closecall victories that only I witnessed. 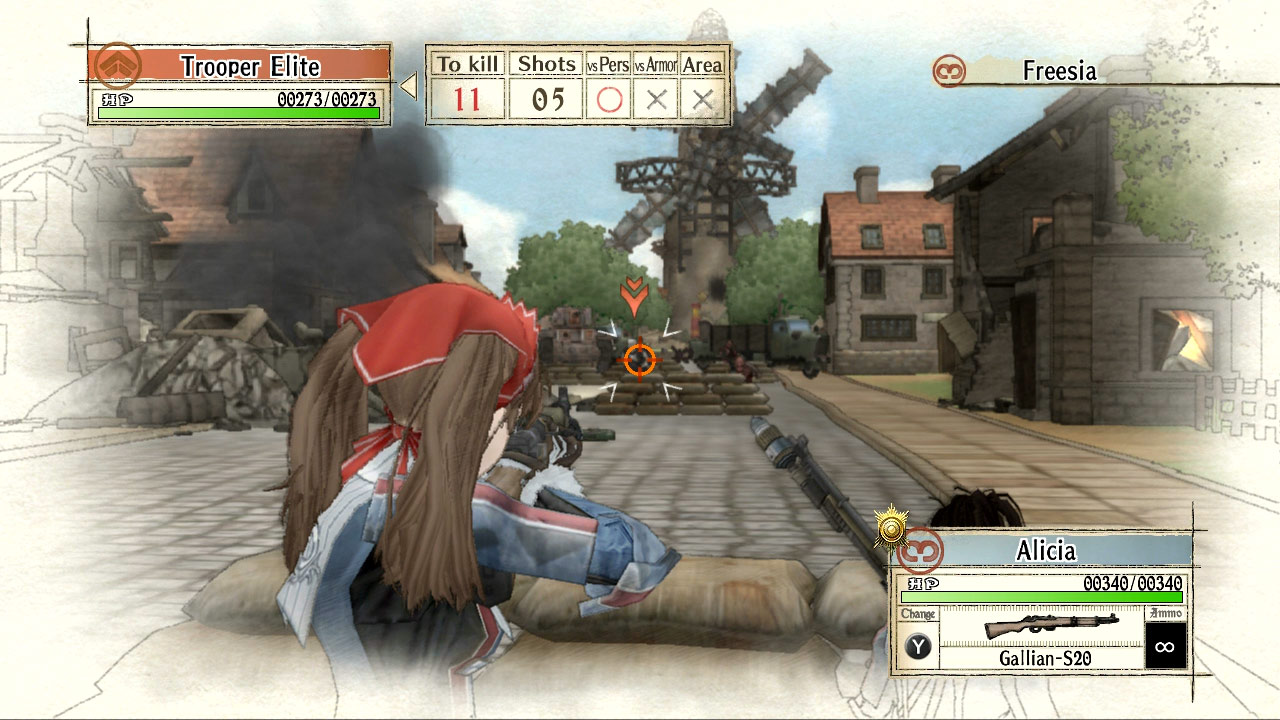 Distance portrayed may not be accurate in support of text.
There is always a hefty amount of things to learn in a new tactical/strategy game, I assumed this was expected and I didn't and still don't mind that. But with this game I never felt I was learning, there was a gradual introduction to them and usually accompanied by a practical tutorial to help you quickly catch on. And when I say practical I mean it.
Foot soldiers equipped with rockets that could destroy tanks if you got behind them to hit their radiator, hiding behind friendly tanks as cover from enemy fire, mow down enemies with the same tank and snipers with limited walking space so you should keep them close to camp while popping in and out of cover. Sending in reinforcements who could resupply your troops, heal others and rebuild barriers. A well placed scout soldier adding extra damage via counter attack was always satisfying. Outside battle you can apply upgrades to make your tank bigger, better and badder. These real essential battlefield mechanics were what I had been looking for. I enjoyed learning everything, probably because it was simplified. I saw a Steam review describe it as a 'casual' SRPG. We all know we have the potential to learn, if only the time could be found or interest triggered and this game filled me with confidence and made me feel like a force of nature on the battlefield. The right amount of planning mixed with a do-as-you-learn approach. The game does offer some help with things like your turn not always ending with your action, allowing you to retreat back to cover and forgivable aiming with grenades and tanks explosives. 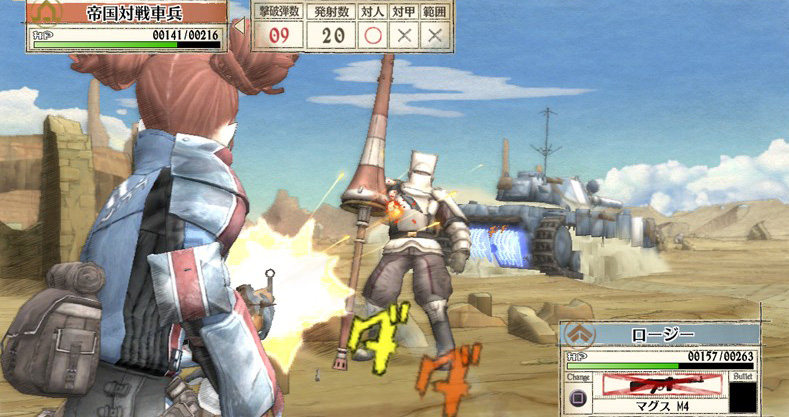 This was a time when the jury, by which I mean me and a few skater friends, was still out and uncertain about shooting mechanics joined with RPGs or how it could ever be everything we thought it could. Here was a damn good compromise the way I saw it, even if you didn't pull the trigger when you were not a sniper. I somehow got a lot more kickback here than in Mass Effect 1.
I like any game where I feel I'm getting better at, or made feel that and here the difficulty felt well balanced for a newcomer. If something went wrong for you in a battle, you could be sure it left an impression for you to not let it happen again. Losing a tank means game over so you know not to rush things. There is a higher difficulty mode if or when I really want to be put to the test. I have not tried this harder difficulty but since this game has never left my mind, I expect now would be the best time to return there. I hear the Steam version includes DLC so that worked out nicely. 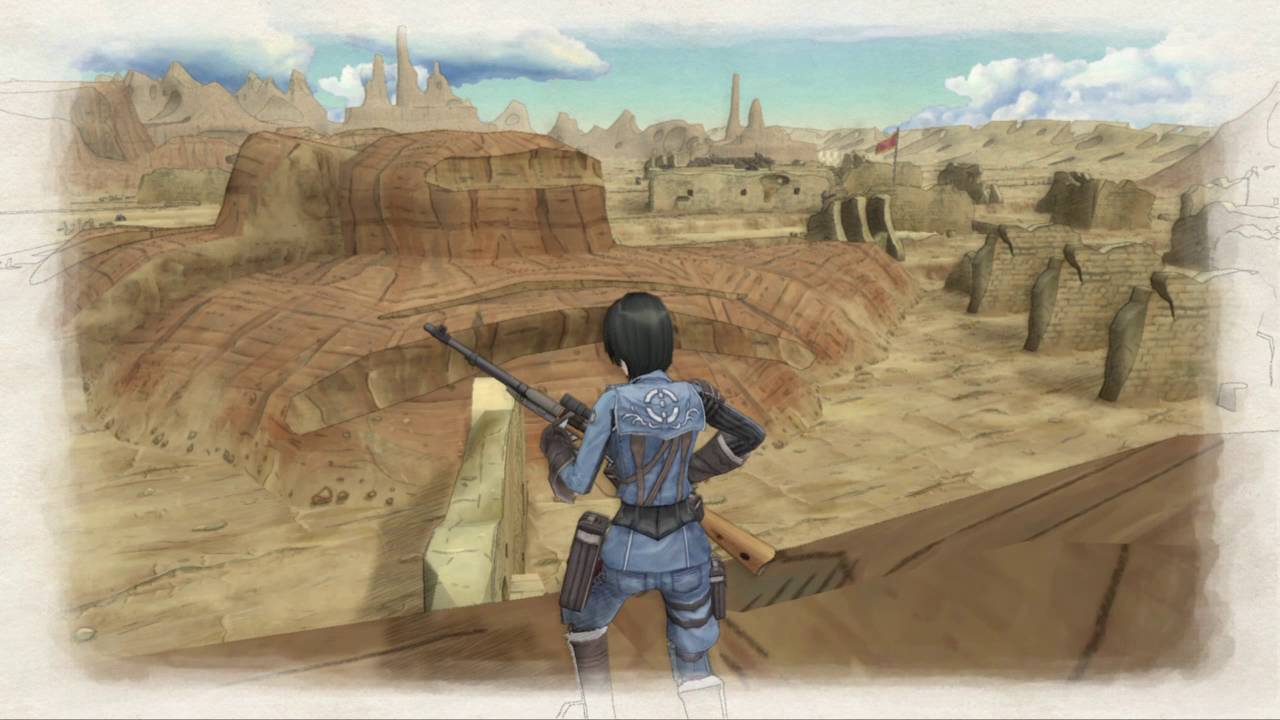 The world has settings like underground mines, countryside fields with windmills along dirt tracks, ruined wartime towns, desert trenches with sandbags piled up for cover and one mission in a freaking city street that plays more like directing traffic (but fun). Very few people believed me when I explained I was not playing this game for the story. If the game ever got repetitive, I never noticed. Sometimes I get immune to having too much of a good thing and it takes a slapdash sequel to show that to me.
I own the sequel for the PSP and have played it but it did not stick in my memory, all mechanics were well recreated on the smaller system and while it did give me more of what I love it did not have the creativity, variety or scale of its older brother - I hear the class additions are included in the fourth game which is good news. I will someday venture into the other entries, in fact any encouragement to keep playing is welcomed. 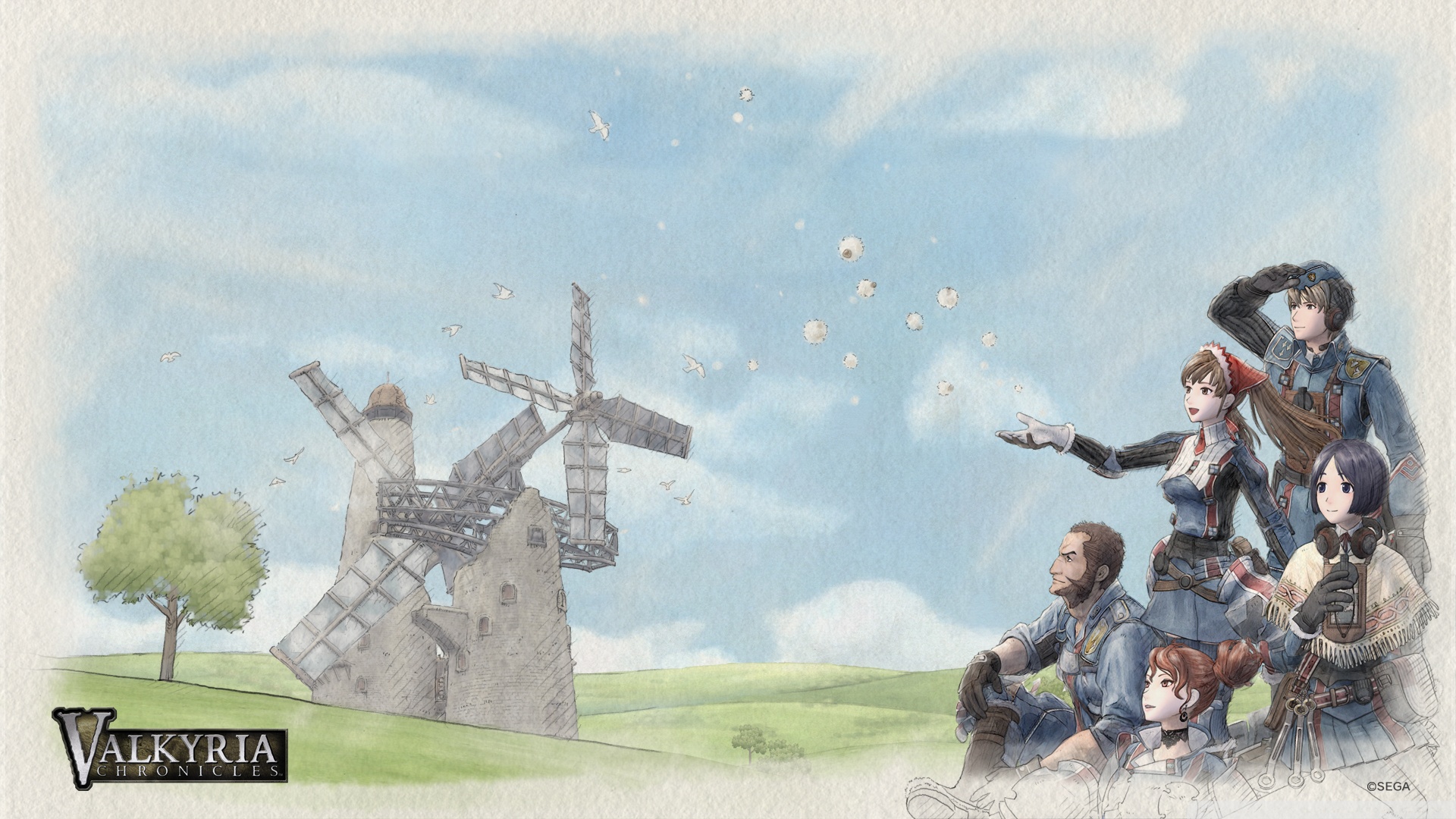 With a great wealth of games available in our modern times, more than the human lifespan, or so my games library tells me, we can easily dip into a new genre that we never imagined ourselves enjoying. We may even tap into new skills that had laid dormant, we just needed the right guiding hand game.
I am still lacking in a skillset for strategy games to this day but for a short while I knew there was one game where I felt like a pro. If that was the game's intention by design then good job. That Galia anthem helped too when the tide of battle had turned in your favor.
I can only hope that games like this one continue to be made, those that try to blend two genres and fans expectations are met somewhere in the middle. Drawing in gamers who otherwise would have kept safely within the comforts of genre borders. I'm certainly glad this game came along and showed me to not always choose so wisely.
Login to vote this up!