Captain is Dead, the Steam version

If you've followed my qtoid posts in February, you may have noticed me frequently posting about Captain is Dead. As a Star Trek fan that this game introduced into boardgaming, I have something of a soft spot for it.

Captain is Dead is a boardgame kickstarted in 2014 by JT Smith, Joe Price and The Game Crafters, later picked up by AEG and now available digitally as a standalone app by Thunderbox Entertainment. I'll describe the game first, and then look at the app. Spoiler alert: it's kinda lacking.

The premise of Captain is Dead is the title. The spaceship has lost its captain, there are hostile aliens attacking the ship and the jump core is busted. Yes, "jump" and not "warp". These small differences don't really hide what the word is really supposed to be. If you want to watch a short video summary of the rules, you can watch The Rules Girl's video on the boardgame, or read on below.

The game is a cooperative game where the players have to repair the jump core before the aliens overrun the ship, the ship is destroyed or the alert deck runs out. The alert deck is used to throw something harmful at the players after each player's turn.

I've seen the game compared a bit to FTL or maybe Space Crew -- the players move around the ship and use the various starship systems in the rooms they are in. Say, on bridge, the players can strengthen the shields. Engineering, repair the jump core. Science lab, research anomalies (debuffs that stick around until they've been researched) and buffs.

Nearly everything the players can do is dependent on a ship system being in working order. Move from one part of the ship to any other with only one action point? Better hope the transporters are operational. Trade skill cards with another player who isn't in the same room? You'll need the comms system for it. And so on.

I've bought the game three times now -- the Kickstarter version (and two expansions for it), the AEG release and now the Steam app.

If the players aren't familiar with the game previously, they can play through the tutorial. There, the narrator from the Stanley Parable plays the "omnipotent, intergalactic space wizard" with more than a passing resemblance to Q and guides the player through the basics. (One recording of the tutorial is on YouTube here; length 20 minutes.)

The boardgame's artstyle works well in the app; low-poly, no shading, bright colours and all style. The characters are animated 3D models, so it's not only static imagery or 2D animations like in Wingspan. 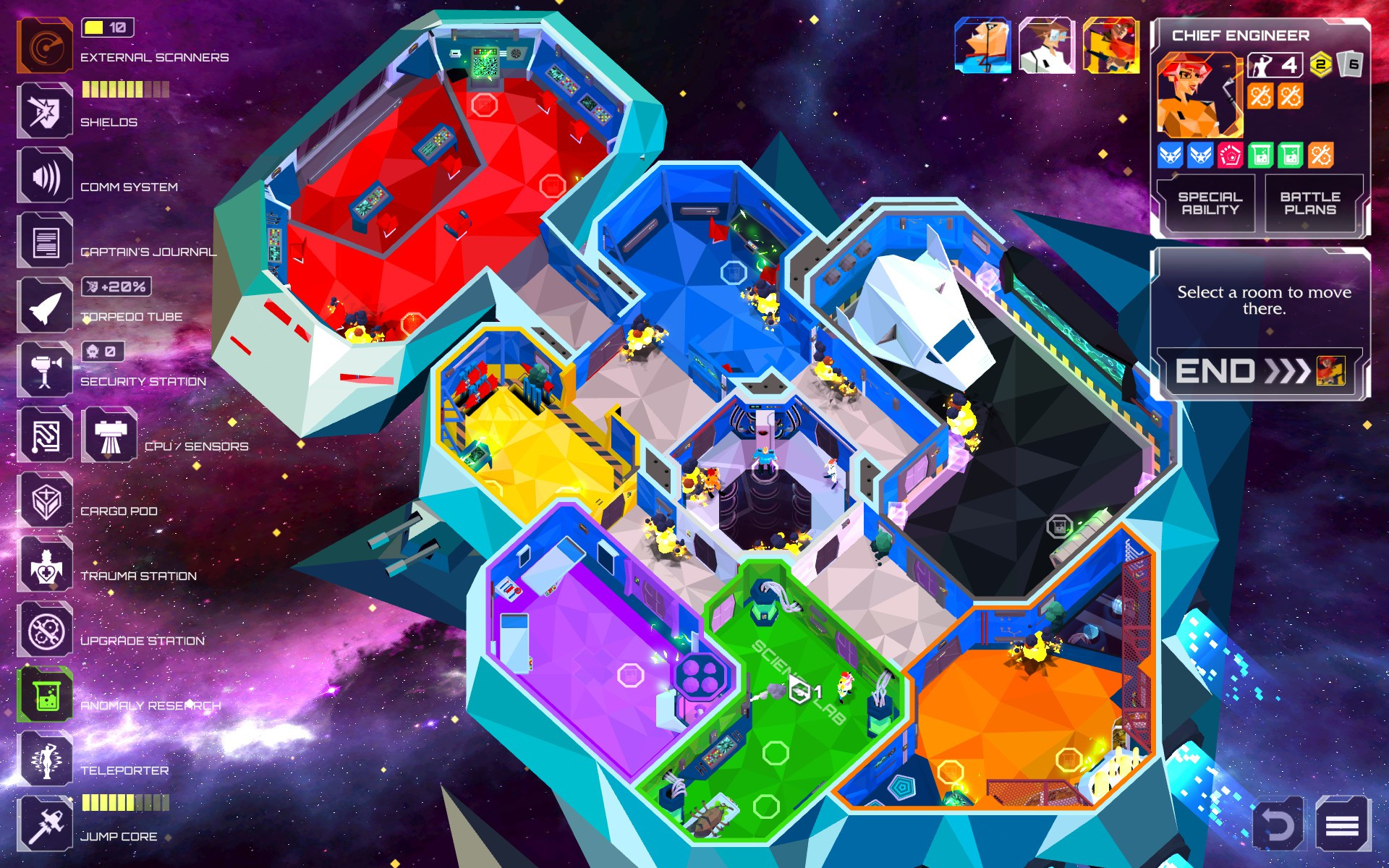 Unlike other images on this page, you can open this image in a new tab to see a bigger picture.

The players are scored at the end of the game, which is something the original game didn't do. Although, I have a hunch the style ranking just displays the number of different skills used, and style points can't matter an iota when your spaceship was destroyed. 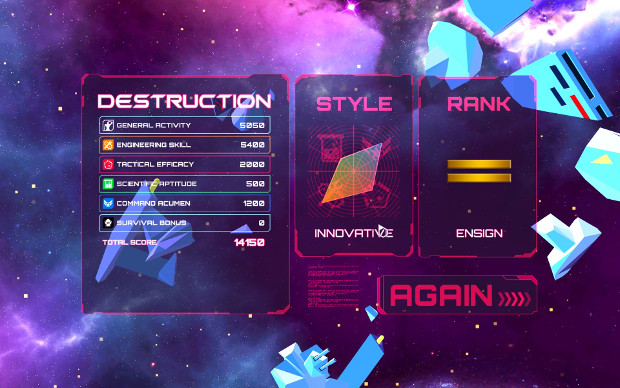 The game's UI, though, is too busy. The bright colours become a bother when I'm looking at ship's subsystem X and the key information there is shown in a different spot than on subsystem Y. This actually relevant information is as such less accessible. 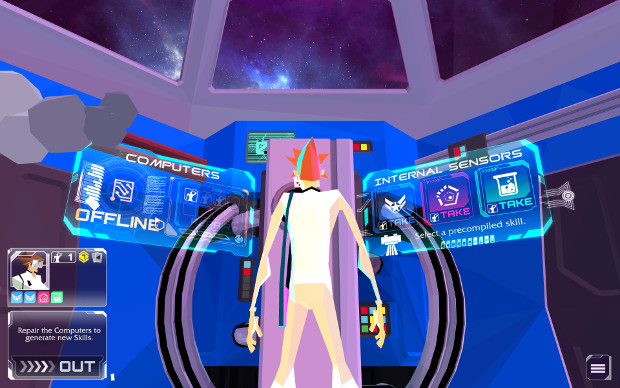 Ensign at the computer core. 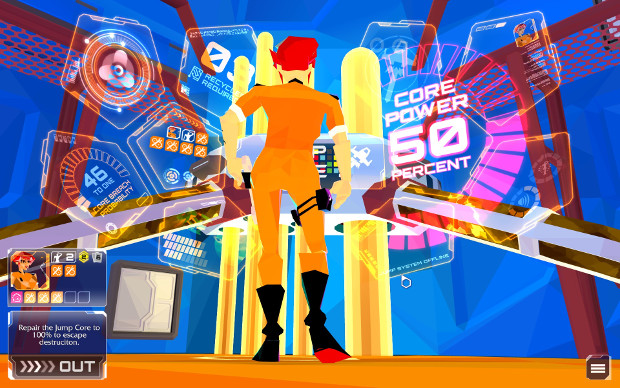 Chief engineer at the jump core, ready to repair the core a notch -- if you can spot where to click.

With many rooms having multiple ship systems, using a system takes many clicks: once to zoom in on the room, click once over a round circle to choose which system to use, then click to actually use the system after checking the skill and action point requirements. The computer core's CPU and internal sensors are the only exceptions to this. Oh, and the character walks to the appropriate terminal in each scene, and I haven't spotted a config option to skip this animation.

The app doesn't have all the character classes either, but only 7 of the 18 the original boardgame in 2014 had. So no hologram (think ST:VOY), no janitor (think Roger Wilco in Space Quest), no scientist. It's been said more classes will be added as free DLC, but since I'm looking at the game as it is right now, I ignore such statements. The classes available cover all ranks: admiral, soldier, engineer, cyborg, councellor, ensign and crewman (redshirt).

The final issue, though, is a doozy: no proper online multiplayer. The game can use Steam's remote play together, in which case only one copy of the game should be enough, but this is hardly ideal. I haven't used this feature before, but as this involves streaming the graphics data over to other people, which makes for a lot of spent megabytes if you got a data cap. The game has no information the players should keep hidden from each other, so that point isn't as much of a problem. Solo players can also play multiple characters, and considering the game gets easier with more players, I'd recommend it for two players as well.

It's been a few years since I last played Captain is Dead, and with the ongoing pandemic, it looks like it'll stay unplayed for longer still. The lack of some of our "favourite" characters (i.e., the ones that made the game easier, such as the scientist) is a negative, the lack of proper online multiplayer even more so.

Honestly, I can't decide if I should recommend the Steam app or not. The tutorial can be watched online if you're into the narrator of the Stanley Parable, the game is faster and easier to set up than the actual boardgame, but it's also lacking in the number of features the original game had (characters, house rules, ...) and missing the online multiplayer that should be a given for a digital boardgame that isn't a solitaire.

If you still need more info (after -- yikes -- 1000 words written in this blog), there are a number of videos on the original boardgame from Rahdo and many others, or you can check the game's BoardGameGeek page.