Sleeping Dogs is a crime sandbox game developed by United Front Games and published by Square Enix in 2012 for PC, PS3 and Xbox 360. It later recieved a definitive edition for PC, Xbox One and PS4 in 2014. In the city of Hong Kong, undercover police officer Wei Shen returns to his old neighbourhood in order to join up with the Sun On Yee triad. After surviving an introductory hazing, he is accepted and begins his struggle to undermine the triad from within. 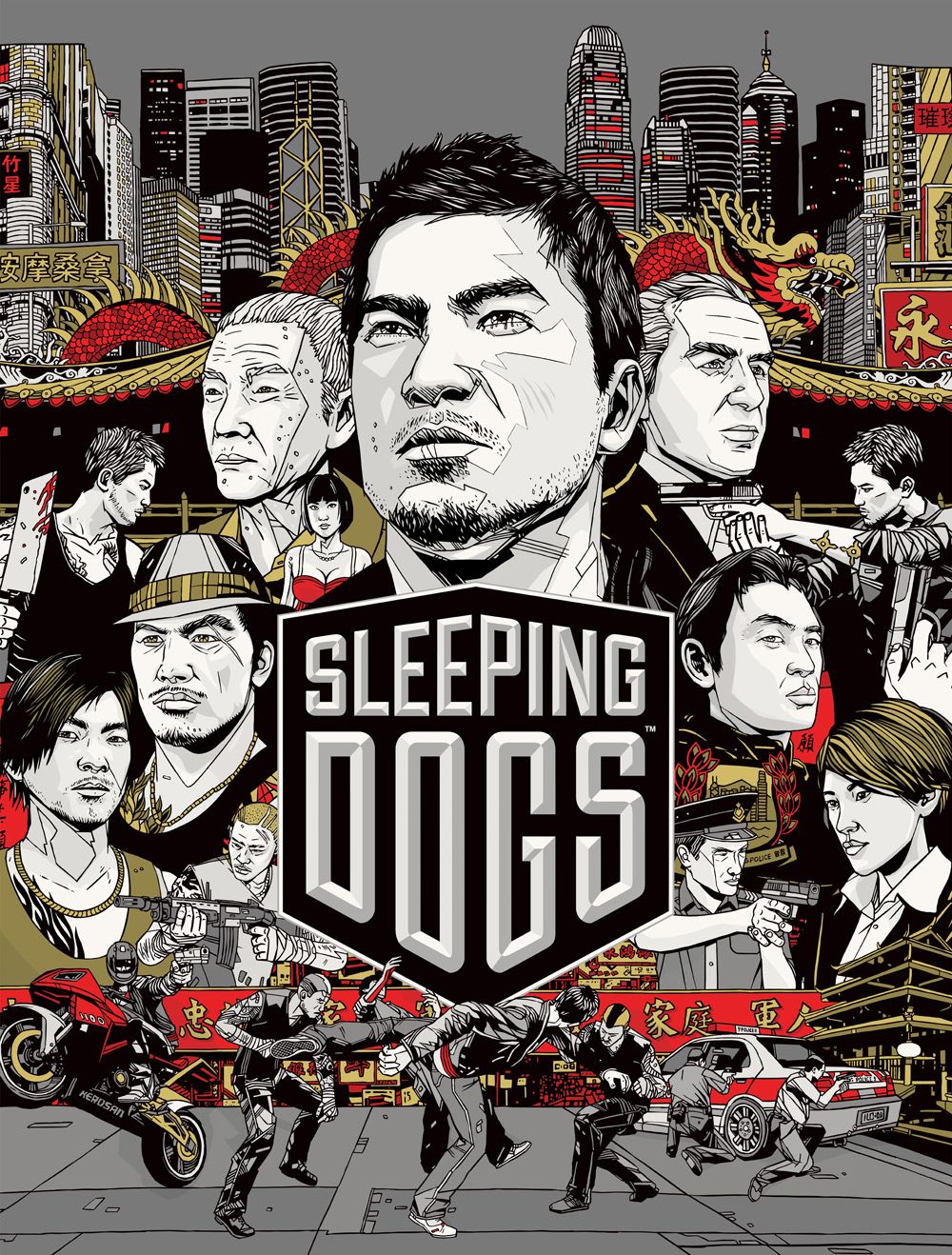 I've had the game described to me as "every single Hong Kong action movie at once", which I think is a suitable moniker, even if I'm not very familiar with the genre. Our main character Wei does justabout everything you'd expect a Hong Kong criminal to do, even if he's undercover police.

He threatens people in market stalls, kidnaps people, shoots other triads while speeding along the streets and gets into rooftop chases. It's some nice flavouring not often seen in games, so it gets points for that. But when you look past all that style, you start to see some cracks in the narrative.

The central focal point of the game is Wei trying not to lose himself to the the triad he's attempting to bust. It's composed of a lot of his old acquaintances, so it doesn't take long before he gets attached and starts having doubts about doing things the proper way. It goes about how you'd expect, with a lot of betrayal and street justice.

But in order to maintain the mission-to-mission pacing, cutscenes are very short. For the more random criminals you have to work for that's fine, but there are quite a few triad members that get too little screentime for how important they are to Wei. The game is really missing some "heart-to-heart" moments that don't take place during a driving section. The game rubs up against the idea of crime being a bad long-term investment, but I think it could have been explored a little better.

And it's not like the game is lacking in budget to make that happen, as there are multiple cop cases you have to solve as part of the main story, but they really don't add much beyond gameplay variety. Come the end of the game, it loses steam in spite of the heightened stakes, which is backwards. All this tells me is that for the last act to land better, the game needed better direction and writing leading up to that point. The final boss is obviously scum, but I didn't hate him as much as I should have and that's disappointing.

Something Sleeping Dogs has over GTA is the addition of a proper melée combat system. It may be a counter-based melée system taken straight from Arkham Asylum, but it's pretty fun nonetheless. Wei has an attack button that can be held to launch finishers through a very linear combo system, a counter to nullify incoming attacks and a grab that lets you get in close for a throw, grab-combo or an environmental attack.

There's some other stuff (like a dash attack, a super meter that heals you, weapons and special attacks that make people dizzy), but it never gets very complex. Thanks to the addition of specialized goons (grapplers & block-happy brawlers) and my own ineptitude it was somewhat challenging in spite of how simple it is. Though if you engage in the side activities, you're gonna end up doing more fighting than is fun in my opinion.

There's also gun combat, which is the part of the game I like the least. It's not fair to judge the game against proper third-person shooters and it's certainly better than what I remember of GTA IV, but I still don't like most firefights. Beyond activating slowmotion when jumping over cover (or after decking people in the face) and being able to shoot blindly from cover, Wei doesn't have any tools that put him above the platoons of guys you have to shoot your way through. As such, if you don't want to get shredded by automatic gun fire, you're basically gonna have to take potshots from cover using some mildly inaccurate weapons, which gets old quick.

Swerving from the worst part of the game, let's talk about the best part of the game, the representation of Hong Kong. The murky streets of the city provide an excellent sense of mood come nightfall and aren't half-bad during the day either, especially with the correct radio station on. You've got vendors trying to sell you crap (like temporary buffs, decorations or clothes) every other block, chicken trucks alongside sportscars and showy architecture not far from legions of fishing boats.

It's a good space to engage with the various foot and car chases in, which make sure you're exploring most of the city. As you do, you can find health upgrades, statues to trade for kung-fu lessons, boxes full of money and clothing plus security cameras you can hack to bust drug dealers.

But in order to wear the showy clothes and buy the fancy cars, you need to earn Face. Face is earned by doing side missions of varying types (short favours, races, fight clubs) and grant you tertiary upgrades. I didn't do all of the side stuff due to the aforementioned loss of steam in the back half, but it's still pretty varied stuff.

There are actually multiple progression systems in the game outside of leveling Face. The semi-hidden statues unlock new moves and shrines unlock more health. But the Triad and Cop stats are the most interesting. During most missions, you can earn both cop and triad xp, but the way you do it provides a fun little dichotomy.

Triad xp is earned by being violent in a varied manner, which slowly fills up one of 3 triad sigils as a sign of you proving your worth to other triad members. Cop xp on the other hand, starts at 3 sigils and deducts points for every mistake you make (failing parkour, destryoing property, harming innocents), so the only way of getting max xp is to not make any mistakes, which perfectly encapsulates the duress Wei is under during his undercover mission through gameplay. In the end, it doesn't amount to much (there are a lot of small cop missions that hand out xp), but it's a neat touch nonetheless.

Included with the definititive edition are two small DLC campaigns. And when I say small, I mean that they're both under two hours unless you partake in some meaningless collectibles. And sadly, I don't think they're good enough to warrant their short runtime.

I had high hopes for the first one, which is about a non-canon invasion of Jiangshi (Chinese hopping vampire zombies) in Hong Kong. But all it amounts to is a pretty bland ghost story that serves as an excuse to fight all the people who died in the main story again. There are some new mechanics in play for dealing with the undead invasion, but it's really not that interesting. And as soon as I was tired of it, it ended without me feeling like anything worthwhile happened. Say what you will about Yakuza Dead Souls, that game at least knew how to end in a satisfying manner.

The second one starts strong, but it just feels like a leftover police case that got turned into DLC. And since it's police-centric, your grab attacks are replaced with a taser and handcuffs, which limits your combats options. With the taser, all you can do is shock people to damage them slowly and the handcuffs are only good for finishing off people at low health. And for being centered around a doomsday cult active during new years, it was oddly plain. Frankly, I should have just stuck with the main game and done a few more races instead.