One common mistake used when discussing the Clock Tower series is to claim that it is a derivative of the Resident Evil games, which is false both from a chronological and gameplay perspective. This series actually started on the SNES, and it plays nothing like Capcom's marquee franchise. For starters, this is an Adventure-Horror game with point-and-click gameplay.

However, it is true that the first game on the PS1 owes much of its success to the interest in Survival Horror games that was generated by the first Resident Evil. I can't imagine many of those who punted on the looks and feel of this game were left satisfied. 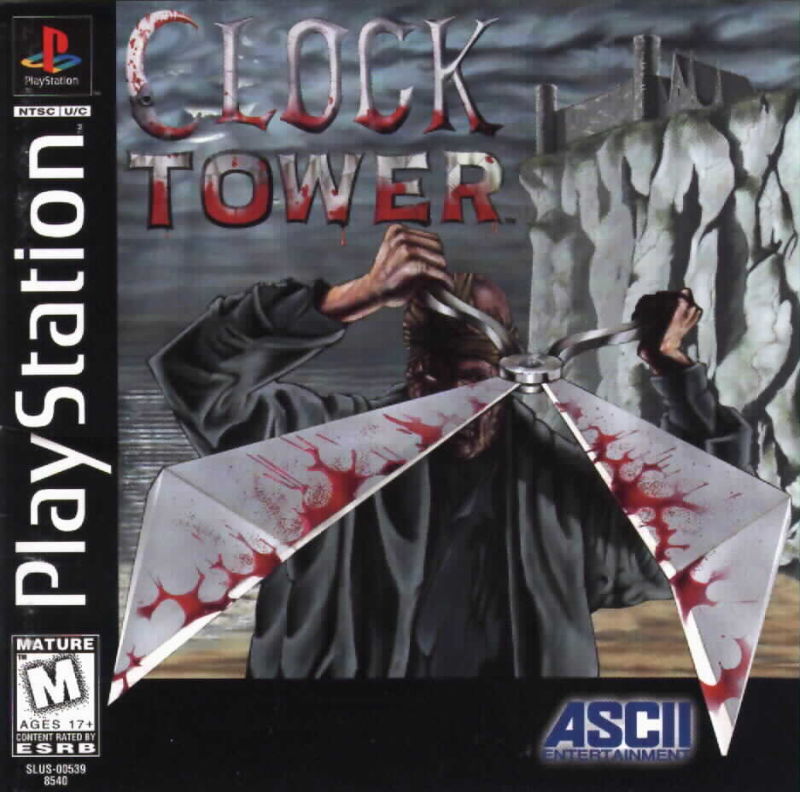 "The giant scissors once again search for prey. A trail of horror stretches across Europe, from Norway to England"

Nominally, the story is a continuation of the events of the first SNES game. In that game, an orphan girl, Jennifer, survived the brutal attacks of an almost supernatural murderer. This Jason-inspired murderer uses giants Scissors as a murder weapon and is therefore dubbed Scissorman.

In this game, you get to choose to follow the story of either Jennifer or her guardian, Helen, as they stumble into yet another Scissorman murder spree and try to survive it or to destroy him. Based on how you progress through the game, the items you find, and the clues you gather, there is one of five endings available for each character, of which only one is unquestionably good. 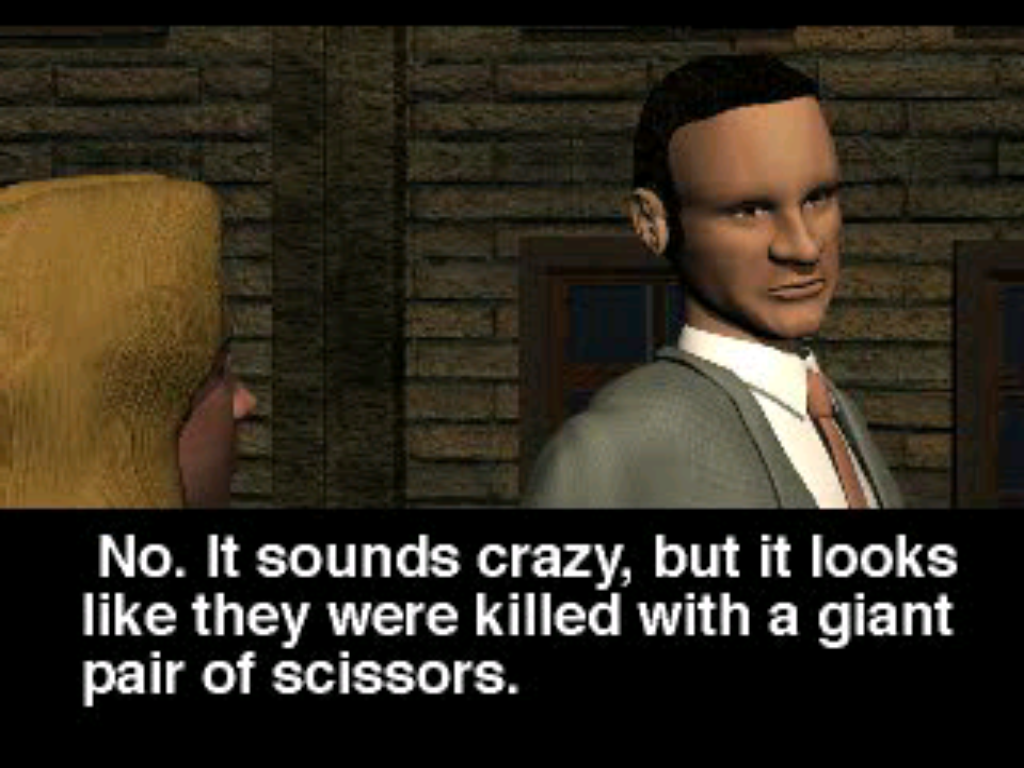 While the set-up is unoriginal, there is no excuse for the weak story and dialogue at play here. Generally, you expect some seriously good dialogue and exposition in any decent point-and-click game, but we get little of that here. This is made even more obvious by the inconsistent use of voice acting, which is available in some scenes only despite the entirety of the game's dialogue barely being 5 pages long. Naturally, this doesn't allow any of the game's characters to be properly developed at all.

What is worse for me is the lack of any interesting lore or background documents you can sink into, something that should be standard in any decent Horror game. While the opening cinematic and exposition dialogue hints at an interesting backstory for Scissorman, none of that is explored with any rigor in the actual game.

"Who will make it through this game of murder alive?"

There are two parts to Clock Tower's point-and-click gameplay mechanics. First, there is the tried and true area navigation and clicking on everything to get info and items. Here, you are expected to read the clues provided by the game to know where to go next and how to use the items you gather. Unfortunately, with such a blurry environment, it becomes very easy to miss vital points which may require you to backtrack for a long time or miss the best endings.

The poor pointer is more critical in the second part of the gameplay. In both random and set-points, Scissorman bursts into the scene and you go into escape mode. Here, you either run and find a hiding space (which Scissorman my uncover and kill you) or find a one-use weapon in the environment to knock him out for a bit. Of course, this can get difficult if your eyes can't distinguish the details in the environment. Still, these sections are usually the best thing the game has to offer. 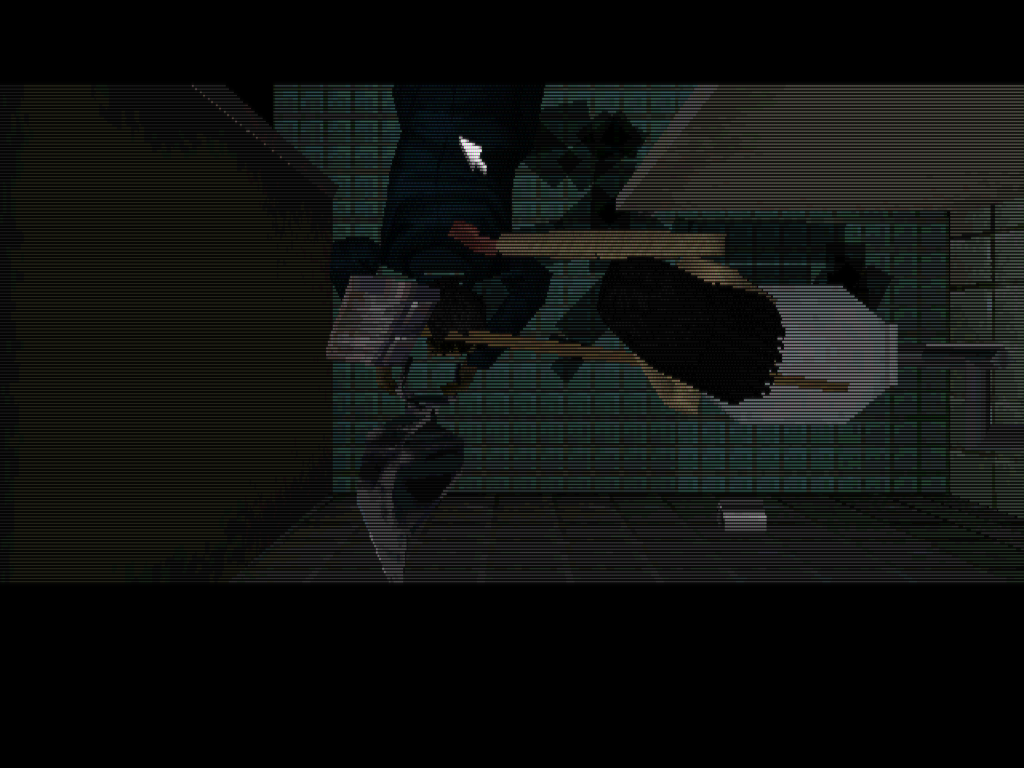 Being an early 3D point-and-click game, Clock Tower was clearly at a technical disadvantage since interactions are barely noticeable in an early muddy 3D environment. This, coupled with an honestly unresponsive pointer meant that playing the game was frustrating most of the time.

Thankfully, the game is mercifully short. In fact, there are only three scenarios, with only the third one providing any semblance of complexity (or atmosphere). I guess that encourages replaying the game to get the better endings (since you also unlock hints along the way).

"What in the #@%! is going on? We haven't even solved the last case yet and now another mass murderer?"

This is the first game made by Human Entertainment that utilizes 3D graphics, and it shows. You can even compare it to the 3D images made by the same studio later and you will see a massive difference (check out the fight scenes in Vanguard Bandits).

As such, the poor character design and animation can be excused and is even somewhat charming in its own historical way. In fact, some effective jump-scare moments manage to land despite the ugly graphics. Unfortunately, the gameplay, which depends on clear visual cues, suffers because of this. 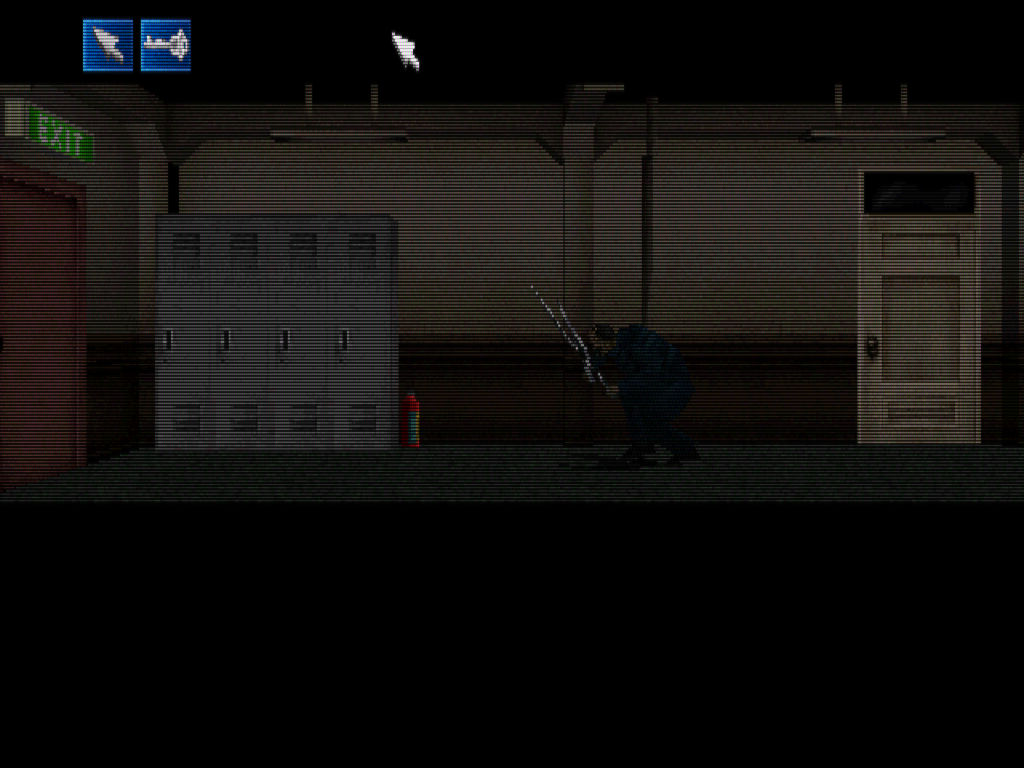 The game has some seriously low visual fidelity

One time, I accidentally clicked on a wall while Scissorman was chasing me, and lo and behold, I clicked on a crowbar I used to bash him on the head. I had no idea there was a crowbar there and couldn't identify it when I loaded until I squinted for two minutes at some black spot.

As for the game's audio, the voice acting is competent but is not always present. And the music is mostly atmospheric but with a catchy and interesting main theme.

The best use of audio is reserved for Scissorman, whose theme plays just before he burst into the scene (during the random moments not the scripted ones), and then he starts chasing you while clanging his giant metal scissors. That clanking sound informs you how much time is left until the bursts into the room and is a constant and welcome source of tension.

Clock Tower is a game that doesn't have a good story, isn't very fun to play, and offers little in terms of production design. I struggle to come up with a reason why anyone would want to play this game nevermind actually enjoying it.

Yet, for kids especially kids playing together, I imagine them having a blast whenever Scissorman bursts into the scene and having a laugh when they fail to evade him. As an adult, I a not having a blast repeating the last 15 minutes because I couldn't see the thing I was supposed to click half of the time and randomly dying the other half. 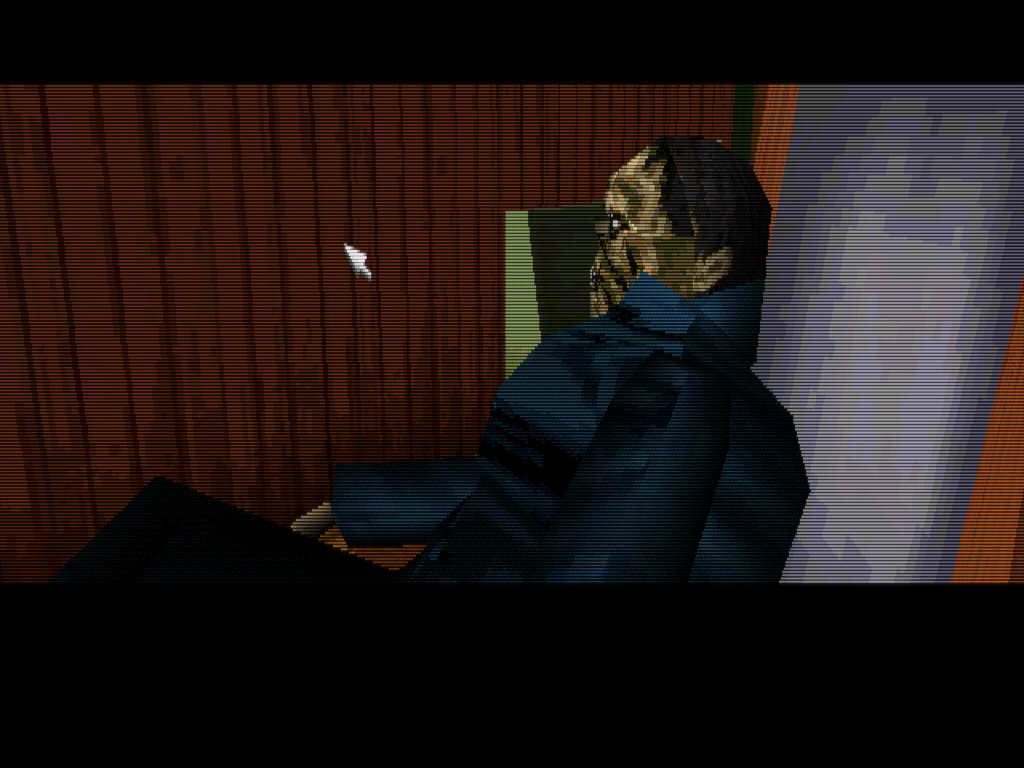 1-Click on everything with an activity mark to get info and items.
2-Some items you get early on are necessary to get the best endings in the last scenario.
3-You need to remember where you send the statue at the beginning of the game.
4-There are two protagonists, Helen and Jennifer. To choose Helen, speak to Harris only one time the first time you see him in the prologue. Otherwise, speak to him twice to choose Jennifer. 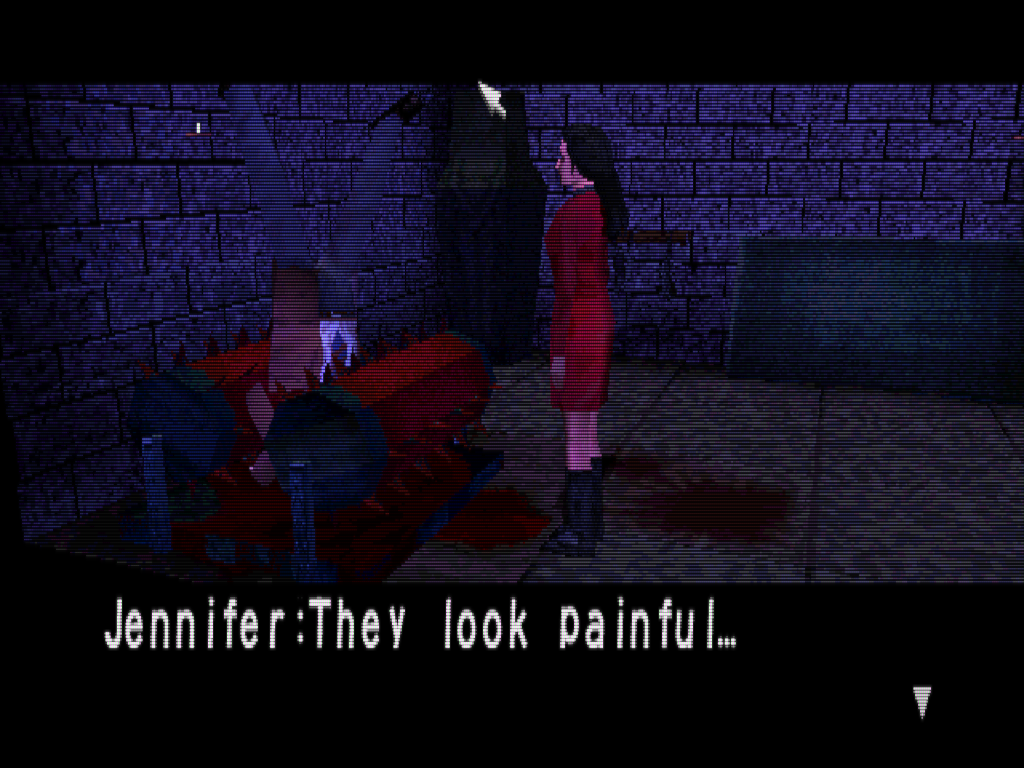 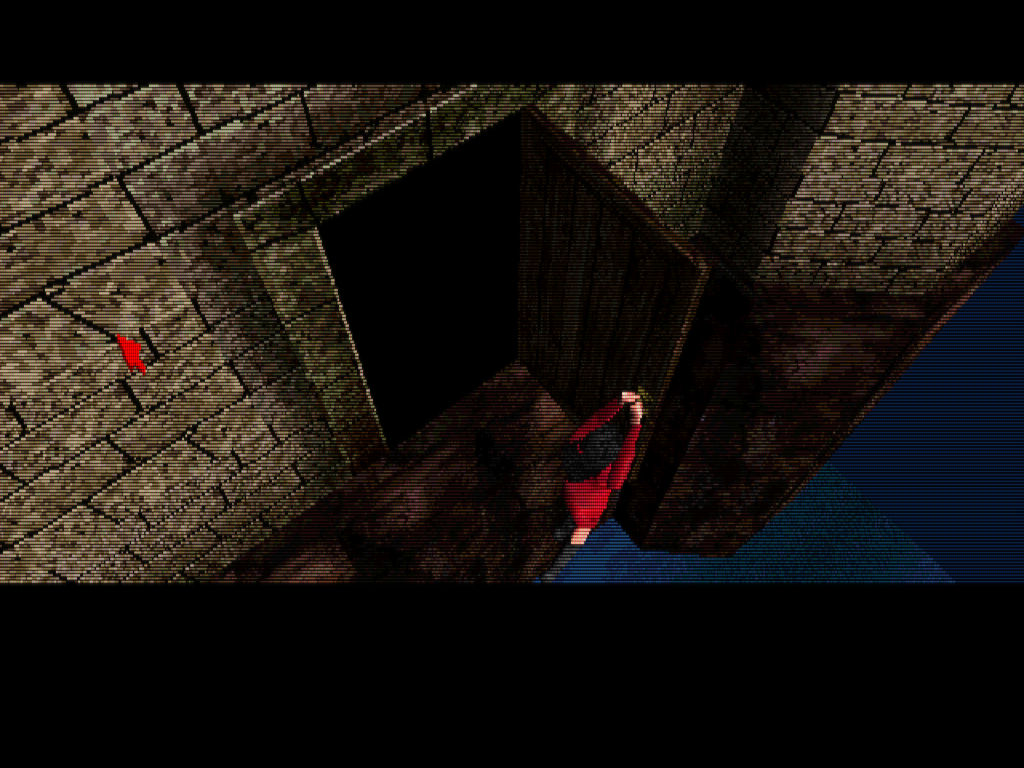 I remember my cousins telling me that Clock Tower was an interesting and "REALLY SCARY" game when I was young. Right now, I disagree on both counts. However, they may have been speaking about Clock Tower II: The Struggle Within, which I am supposed to review next.

If I find Clock Tower II to be as bad as the first game, then I will skip reviewing it, and you can consider this review to cover both games. If that happens, then I will love directly to game #62 in the addendum list, Saiyuki.