Tomb Raider (2013) is a third-person shooter action-adventure game developed by Crystal Dynamics and published by Square Enix in 2013 for PC, PS3 and Xbox 360. It also received an enhanced port on PS4 and Xbox One in 2014, plus a port to Shield TV in 2017, whatever the hell that is.

The game is a reboot of the series starring a fresh-faced Lara Croft going on her first big archeological adventure. Lara and her expedition are on the hunt for Yamatai, an island kingdom in the Dragon's Triangle outside of the coast of Japan said to house the remains of Sun Queen Himiko. But as soon as they find it, a storm sinks their boat and Lara finds herself alone on the harsh island. Determined to find her friends and escape, Lara gathers her courage and fights through the legion of cultists who have made the island their home. 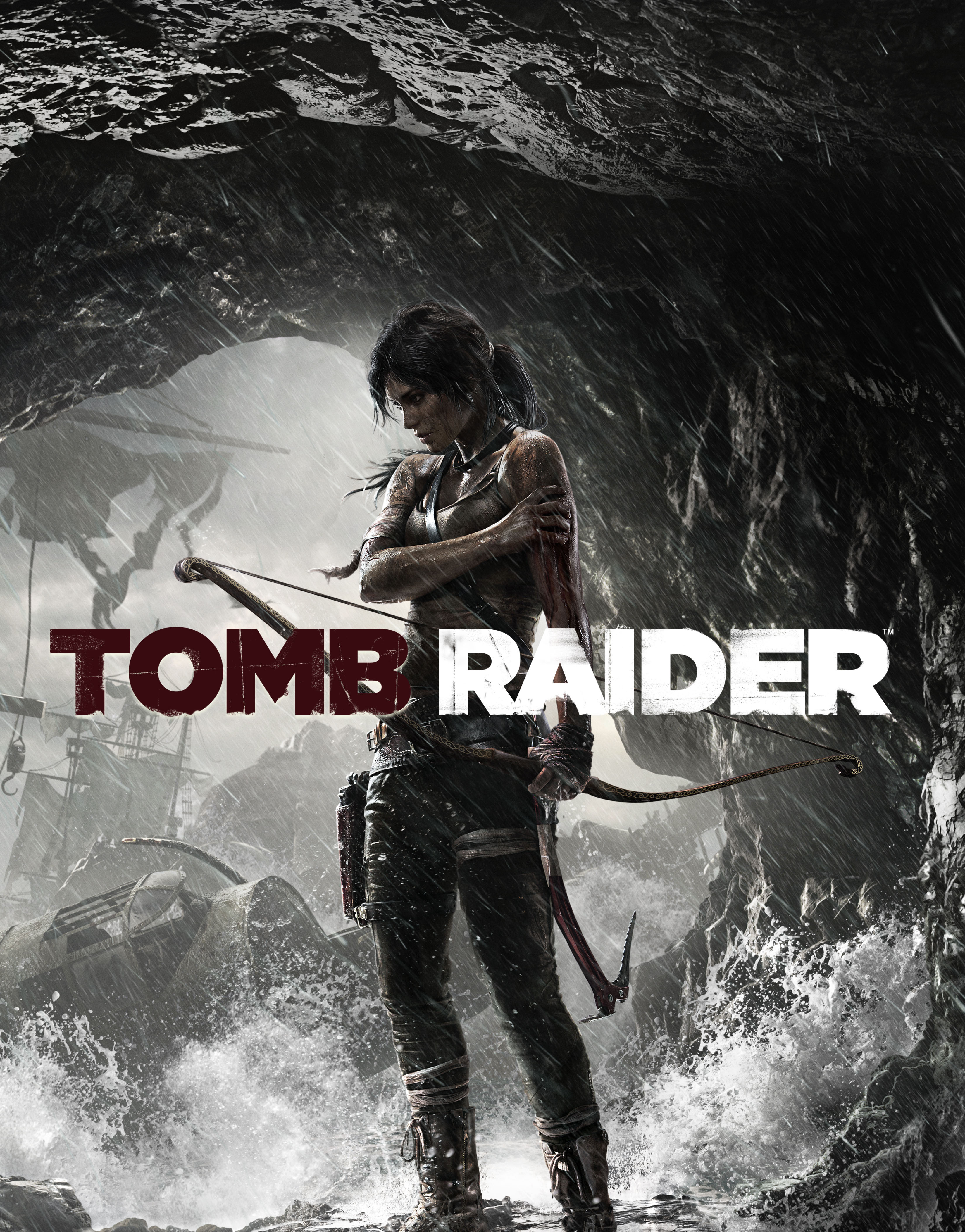 A Survivor Is Born (And Abused)

Being an explicit origin story for the titular character, 2013 presents a very different Lara compared to the cocky sunglasses-wearing tomb raider of the original series who roundhouse-kicks people in the neck and rides up elevator cables with one hand. Even compared to the more mellow Lara from later titles, this one is considerably less pulp-y, though she still manages some incredible feats. Said feats often being framed as something very harrowing and barely survivable (like climbing a radio tower) instead of being just another thing she can do without exerting much effort.

On the topic of violence though (or in this case, action-hero killing sprees), 2013 does a somewhat better job of handling it than its contemporary Uncharted does by actually adressing how fucked up it is to kill people en masse. Lara is forced to kill to protect herself, which does the poor woman's psyché no favours. But as soon as it's time for shootbangs, it's basically dropped for the rest of the game and you can kill dudes left and right without complication.

I understand why they went for human enemies, but the awesome moment of empowerment you get when she gets the upper hand on the cult in the lategame doesn't swing as hard as it should. I think the cultists would serve both the gameplay and the story better if they were less common and more of a threat, as it would sell both their rabid nature and Lara's inexperience better.

The story at large is where the game falters moreso than with its main character I'd say. The idea behind the story itself is fine for this sort of game, but it feels slightly padded as characters are somewhat slow on the uptake, though there is a reason for that. What really grinds my gears though is the way the crewmembers Lara brought with her are used throughout the game.

The game commits what I consider a major writing sin by starting in medias res without a good hook. Instead of having a pleasant intro where you're introduced to every supporting character properly before everything goes to shit, you're thrown head-first into the exciting part with only mediocre character interactions and a less-than-ideal video flashback to give you an idea of who everyone is.

Let's take Lara's friend Sam for example, the game's damsel in distress. Obviously, Lara cares for her a lot given what she goes through to save her (so much so that you wouldn't need to change the story much to make them lovers). But me as a player has no idea of why she's worth all that. There are some journals to stumble upon in the game (some ancient, some current), one set of which is Sam's. But it just wasn't enough there for me to latch onto anything. For as much flak as I give Uncharted, those games at least have the decency of characterizing people properly. If the two characters represented some interesting clash of ideals that brought them closer together I'd be so much more on board.

Overall, I quite enjoyed the adventure, warts and all, but given what I've heard about the sequels I'm not sure if this direction was the right choice. You simply can't have Lara dive through the air shooting dinosaurs while doing sick flips in this continuity without a lot of games bridging that gap. I love the old characterization, but getting there from here is an A to B to..X to Z process. So obviously they needed to go somewhere else. But the things I've heard were not kind about the direction they took the trilogy. Probably gonna explore that evolutionary dead end at a later date.

A Cornered Mouse Sure Can Shoot A Lot of People

Continuing with the Uncharted comparisons like the hack that I am, I have to commend 2013 for being so much more enjoyable to play. Something as simple as Lara being able jump higher and course-correct in mid-air (plus dodge-roll further and faster) does wonders for the kinesthetics. Whereas Drake's movement is stiff and realistic, Lara can bounce around Yamatai without a care in the world and it feels great. And you're not even confined to ledge-climbing hell as often!

But the good stuff doesn't end there, as the combat is a lot of fun too. In what feels like a direct answer to my critique of Uncharted, 2013 has much shorter gunfights and lets you carry around all your weapons at once. This does mean that it's basically impossible to run out of ammo, making the game quite easy, but I'd rather have it like this instead of the cover-humping you have to do to survive in Uncharted. Still, an alternate mode with more restricted ammo would have been nice to sell the survivor angle more.

That way, you'd be incentivized to make use of the game's stealth system more. While simplistic, I still found it engaging to try and pick off cultists silently with Lara's awesome bow before they caught on. Alternatively, you can oftentimes blow up explosives to cause chaos and then dive in with shotgun in hand to engage in close-quarters combat. There's even a nice little dodge-counter system that's used to dodge a melée attack and then trigger auto-aim as a reward.

I wouldn't say it's a unique, nor properly balanced combat system, but it does so much right while controlling so well that I just don't care.

To cap off its Hat Trick against Uncharted, 2013 does not only have better climbing and combat, but also a more interesting world to explore. Instead of being an incredibly linear romp, Tomb Raider is divided up into a linear set of small but often wide areas filled to the brim with goodies to find at your leisure.

Progress through about a third or maybe half of the game's areas is non-linear to some degree, meaning you can carve your own little path through them. Helping this is the game's moderate level of metroidvania-esque progression, which doles out equipment that widens Lara's set of abilities or makes them better to allow for easier backtracking.
I'm particularly fond of two areas which, when properly explored leaves you with these amazing spider webs of rope that go up and down everywhere, which can be used to speed through the area you've slowly been exploring through up to that point. Interconnected verticality rarely gets the love it deserves, so I'm glad it was thrown a bone here.

Then there are the tombs, which is where most of the game's puzzles are sectioned off to. While just the game's tutorial puzzle runs laps around the braindead exercises present in Uncharted, the tombs are where the real fun is. While a few are simpler than I'd like, there are still a fair few very enjoyable "setpiece" puzzles with unique gimmicks that you need to figure out. They aren't Zelda dungeons, but damn if it isn't satisfying to get to the treasure chest at the end and get some tomb raidin' done.

The collectables range from treasures (which Lara offers some flavour text for), the aforementioned journals, plus some GPS caches and area-specific secret objectives. I like the first two, but the other two aren't as enthralling. The caches give out crap XP and only by collecting every single one in the game will you get a proper reward of any kind. The secret objectives grant good XP if you complete them fully, but they're the only collectible that doesn't show up on treasure maps, meaning you really need to comb an area through to find them, which can be quite difficult given the verticality.

And due to how the upgrade system is balanced, you barely have to complete any secret objectives to learn every skill, nevermind the best ones, if you just collect the treasures and find the journals. The skills you can learn don't change the game massively, and the further you go on, the lamer they get. I assume this was done to make the game easier to complete for people who don't care for exploration, but exploration is implied by the game's title, so I think the player should be expected to do more of it than this.

The weapon upgrades are more interesting, as the salvage needed is more restricted than XP. I actually had to make some small sacrifices to get the upgrades I wanted, which felt very rewarding whenever I unlocked a new set of upgrades to pick from. Come endgame, you'll be running around with a very respectable and somewhat ridiculous arsenal, but the way it's slowly ramped up makes it work.