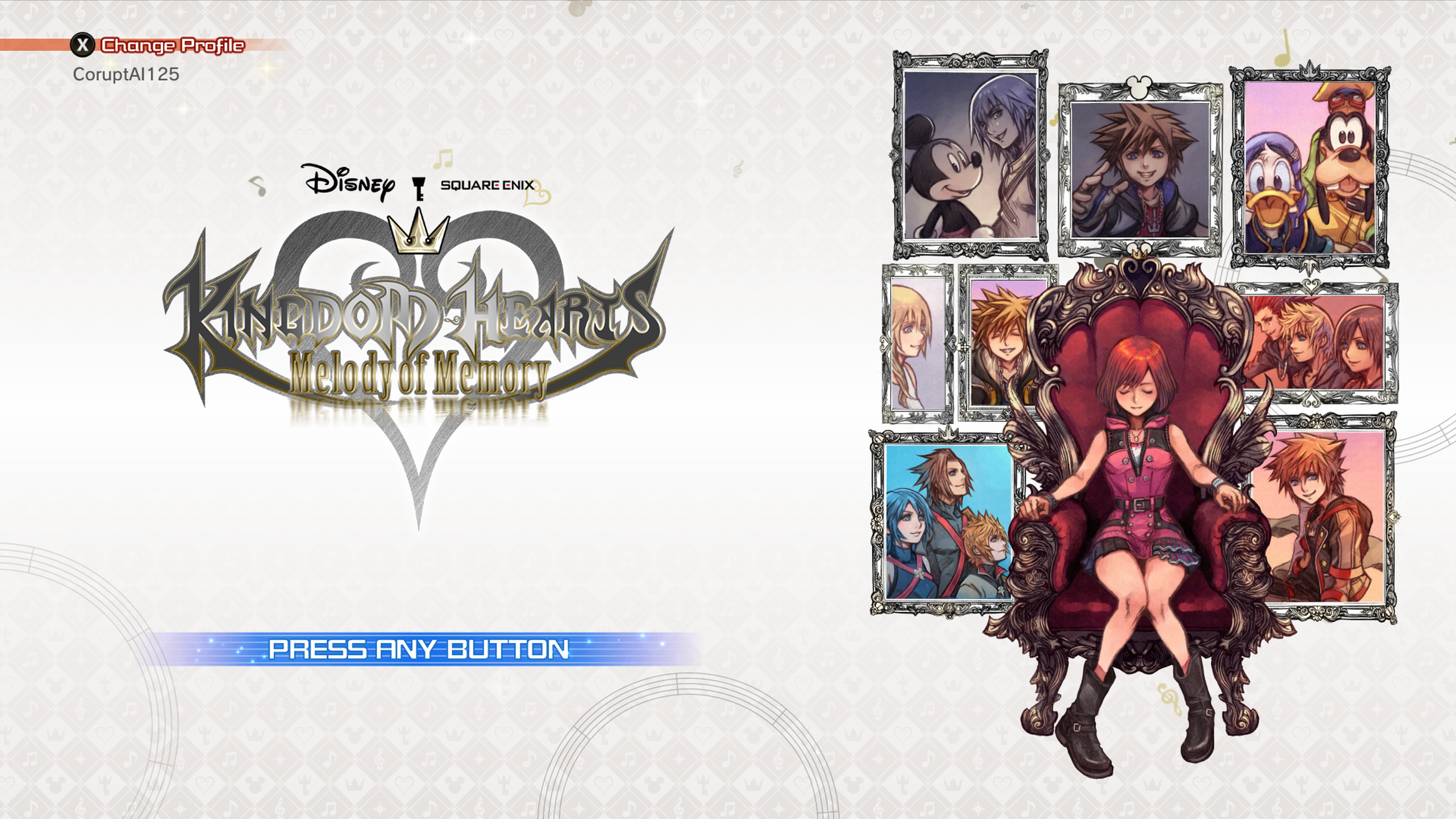 When the pandemic started, I thought I'd write my ass off. What else did I have to do? I figured I'd finally jump in full force instead of my usual dip of the toe. Instead, I've basically done nothing but pull my hair out and completely destroy my already fragile sleep schedule. It's been rough, but also I've been immensely lazy. I'm hoping to change that, starting with this little piece on the newest entry in the Kingdom Hearts franchise. God help me. 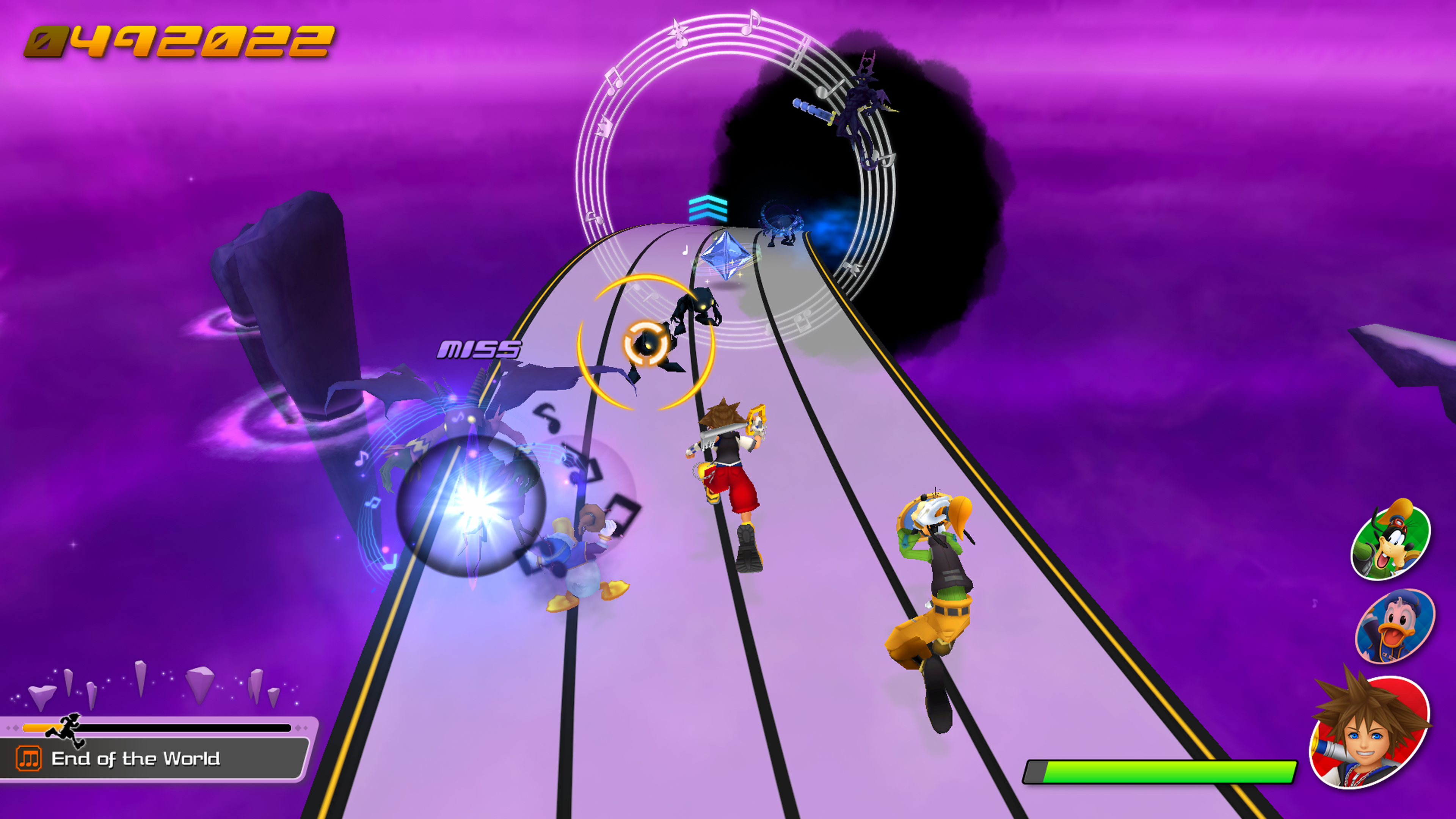 Melody of Memory feels very disjointed. You'd think explaining how a rhythm game works would be simple, but this is Kingdom Hearts. Nothing can ever be easily explained, even the purely mechanical elements. For some reason, there are actually 2 different core ways to play, split between standard tracks and the more cinematic "memory dives" and boss fights. Yes boss fights, because why the fuck not. In the standard tracks, you play on 3 "lanes" with a 3 person crew, and you destroy enemies in time to the beat of the song. One might come to the natural conclusion that each lane is a button, but no. In reality you often play large chunks of the game with one button, hitting enemies in any lane. The other attack buttons only come into play if 2 or 3 enemies appear at the same time. Outside of that, you also have a dedicated jump button to hit airborne enemies and you can hold that same button to glide and collect airborne musical notes. The way it's all laid out on the screen looks extremely hectic at first, but once you get a few tracks under your belt it's quickly becomes second nature. 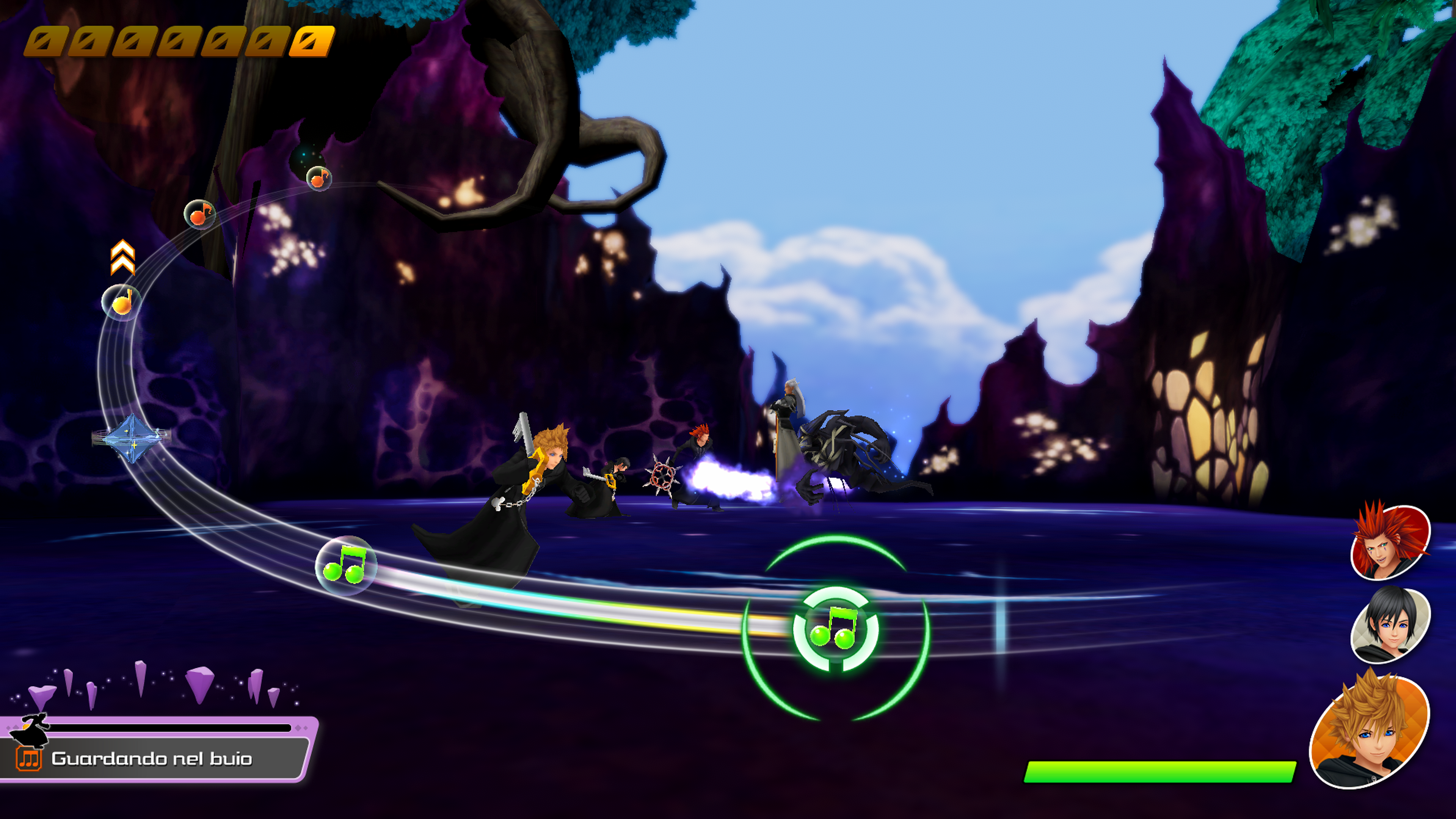 There were plenty of times in the game when I was totally in the groove, playing to the beat and absolutely feeling myself. It was a trip down memory lane, and it was sensational...when it worked. I had a lot of issues with "note" placement and timing, which is pretty much the main thing you'd hope a rhythm game would nail. Often I would find enemies and obstacles that seemed randomly placed, totally off pace with the music. It destroyed any sense of flow, and it's impossible to forgive. The game has 150 tracks, which at first glance is a pretty crazy amount, but a good chunk of them were definitely given the short end of the stick. It becomes especially noticeable in the memory dive tracks. This group of songs includes most of the big tracks people know: Simple and Clean, Sanctuary, Don't Think Twice, etc. You play these tracks in a completely different manner from the standard, and it sucks. The glide and jump notes are gone. Instead you have notes you have to hold, and you need to flick the stick in specific directions in addition to the standard button pushing in time with the music. It definitely fits into what I would consider a more standard rhythm game mold, but these tracks seem to suffer the most from odd note placement. I want to sing along and really immerse myself when I'm playing these marquee hits, but instead I find myself cursing the strange off beat notes that constantly fuck things up. 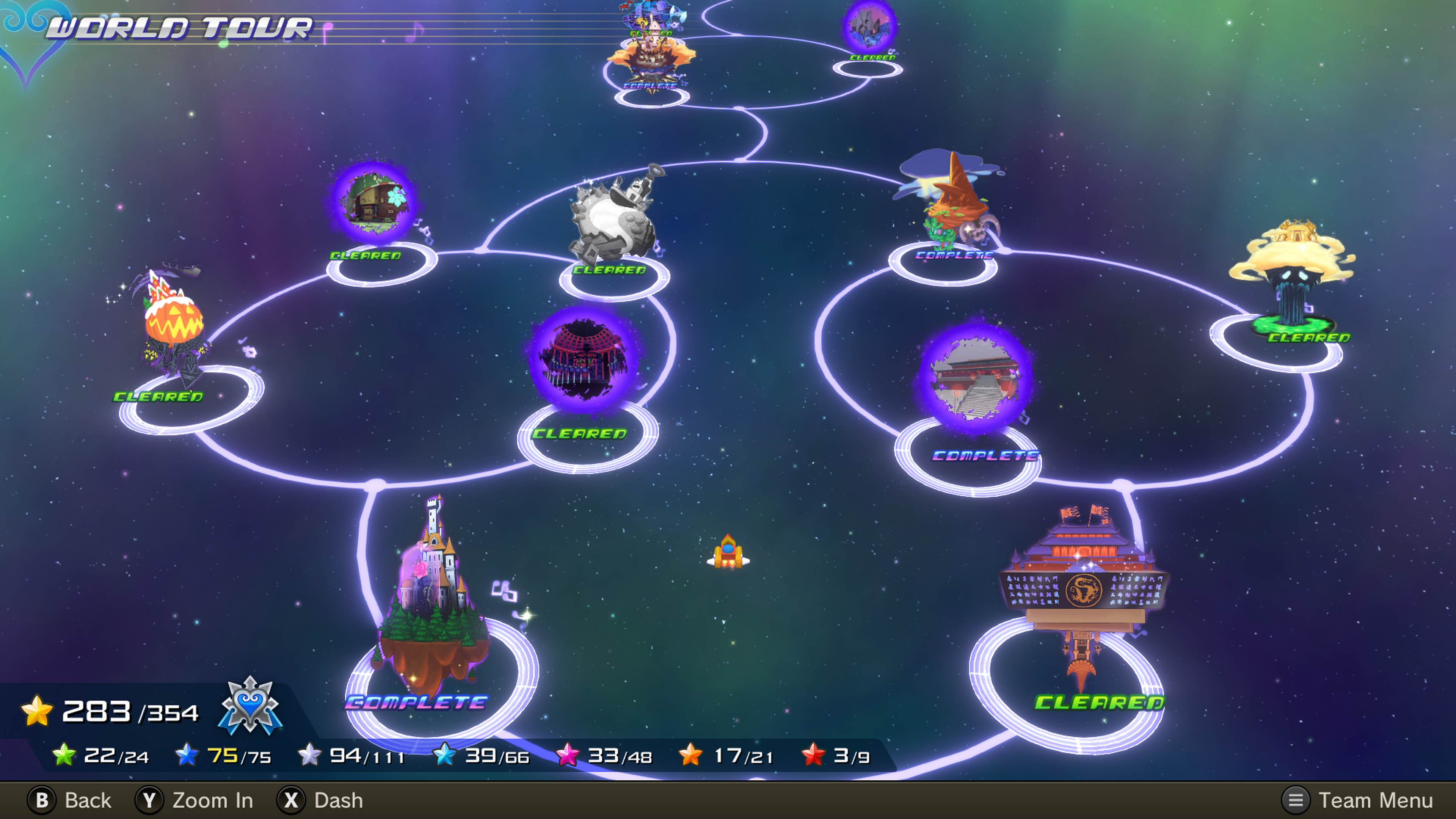 Of course, since this is a Kingdom Hearts game, it also has a story, one that is absolutely critical to the overall plot of the series. Sure you could google the 15 minutes of cutscenes at the end and get the gist of it, but where's the fun it that? Instead why not play through over a hundred tracks that cover the complete Kingdom Hearts chronology in order, starting with the 2002 original. I may sound a bit facetious, but I actually greatly enjoyed the story mode. It features Kairi as a narrator reflecting on past events, and isn't a bad refresher course. In fact, it really made me want to replay the series again from square one, which is an absolutely insane idea that I hope to make reality in 2021. Each track in the story mode has 3 semi-optional challenges that get you stars. I say semi-optional because there are gates with star requirements that you need to unlock to advance forward. These requirements are always pretty low, so even if you are a terrible player like myself it's easy enough to get by, but they provide a challenge if you're looking for one. The biggest problem lies in the Kingdom Hearts 3 section of the story, which is basically non-existent. Each world gets a single track at best, others are skipped completely. They're also all in the memory dive format, meaning the quality really take a dive towards the end. You do get Let It Go in the Frozen world though, so that's something. 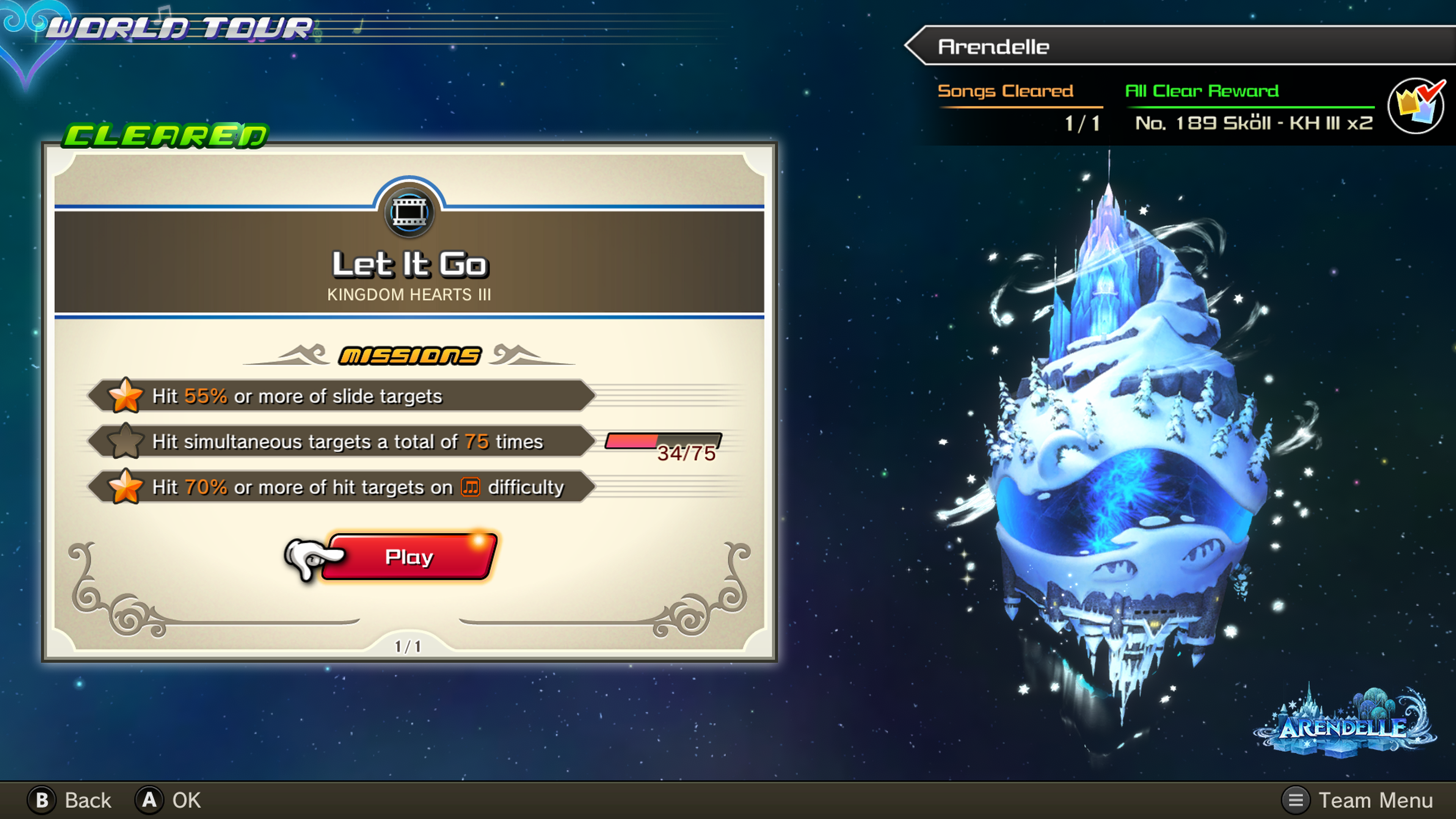 Rounding out the package is a versus mode that you should never, ever touch. I played one match against a human opponent and about 20 against the AI solely because there was an achievement for doing so and I have a problem. I hated pretty much every second of it. It really seems like it was thrown in just to tick off a box. The long and short of it is this: you and your opponent play the same song and whoever has the higher score at the end is the winner. The twist is there are "trick" moves you can deploy to hinder the other player, and they're complete bullshit. What trick you do to your opponent is random, you just fill a bar as you hit notes and hope you get something that will fuck the other guy over. In my experience with the AI they almost always got the most annoying and frankly impossible to overcome tricks. Imagine playing along to your favorite Disney tune when suddenly the notes disappear and you have absolutely no way to see what the hell is going on. It literally makes the game unplayable for fairly long chunks of time. There are other tricks that do things like miniaturize enemies or make hit targets flicker, but they're so easy to overcome they make little difference. All you can do is hope the bullshit tricks come up in your favor, otherwise you're fucked. It's that simple. 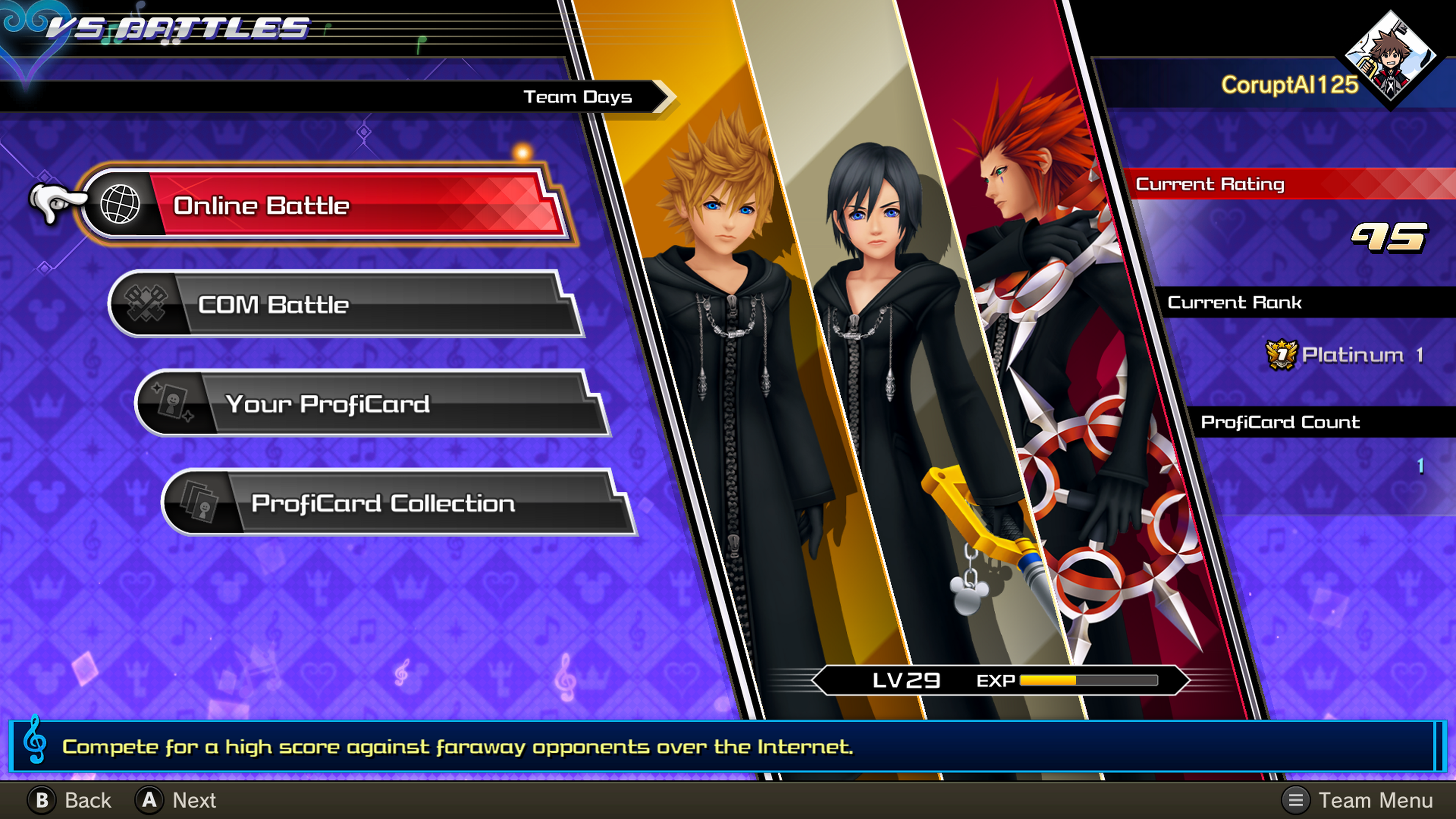 I suppose I should mention there is a co-op mode, but it's local only and I have no friends. Also there's a pandemic going on so I've got nothing on that front. 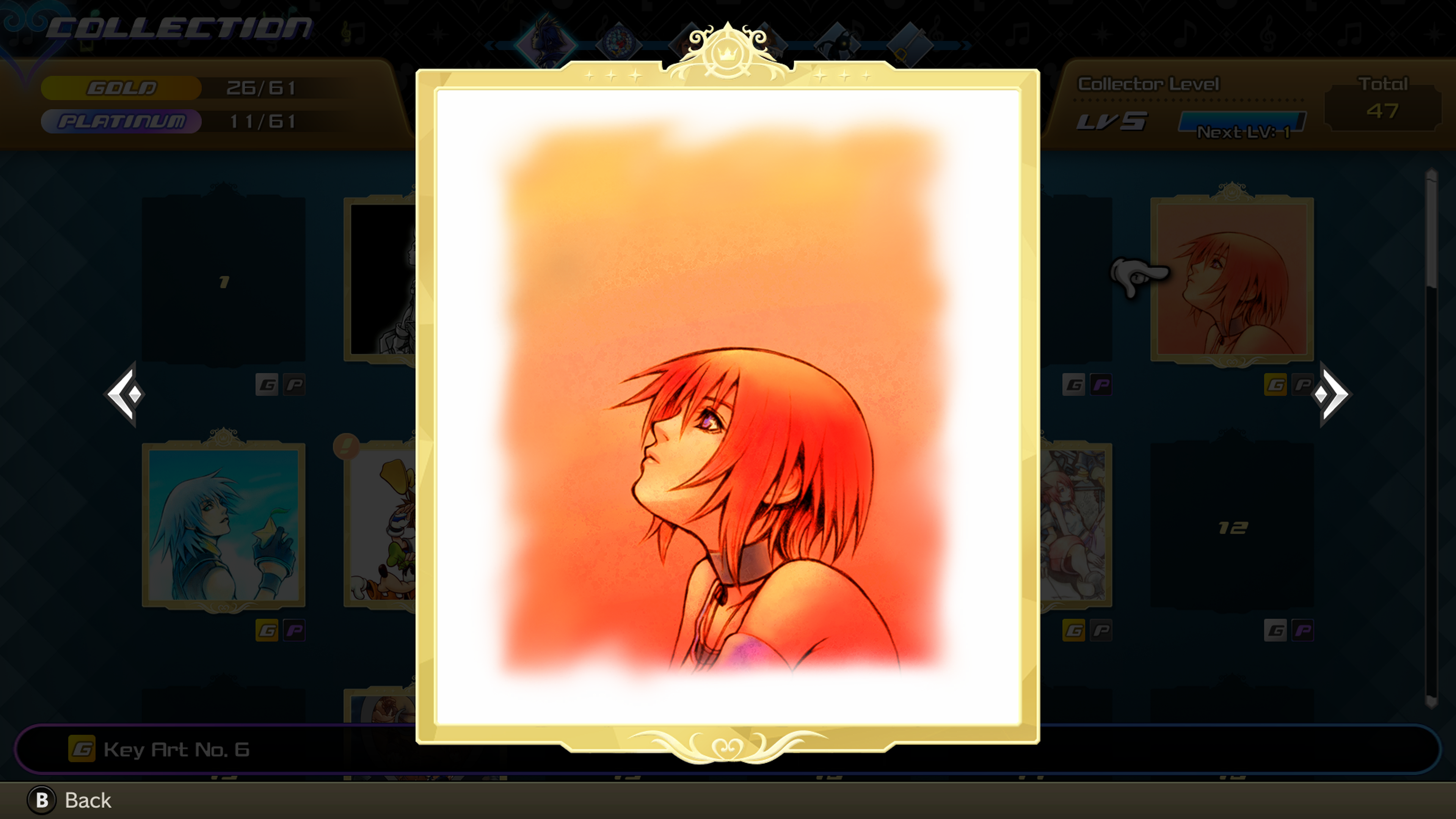 As I type this conclusion I feel like I've perhaps been a bit harsh on MoM. I have a lot of issues with it, and yet I've spent the last few days trying to get full chains on proud mode. I keep coming back, even though there really isn't a tangible reason to do so. There are unlockable art cards I guess, but I don't really care about them. What I do care about is reliving my childhood through music that is deeply ingrained in my psyche. As I play Simple and Clean and sing along for the 9th time I still feel a little joy, which is so rare a thing to feel in the year of our lord 2020. Sure it's frustrating sometimes, but for me there's a personal connection to the source material that makes it worthwhile. I can't imagine many casual fans will really get anything out of this, but I also can't imagine many casual fans bought this at full price on release. If you're a big KH fan like me you've probably already beaten the game and have since been complaining about Nomura doing Kairi dirty again. If you're somehow on the fence, I'd say wait a little while for a sale. Just know that the experience you're getting relies heavily on nostalgia, and maybe isn't the best based on merit alone.