Emergent gaming has been around for a very, very long time. The concept of getting a perfect score or beating a game as quickly as possible are examples of emergent gameplay types. For this month’s band of bloggers prompt, I had Dark Souls 2 in mind when I suggested it. There are a ton of ways to approach the Souls games, from making it to the final boss and seeing an ending to defeating all of the bosses, to defeating all of the bosses while also completing all of the character-specific side quests. Those are weak challenges though when compared to tackling the game nude and while dual-wielding knives or shields or using a Miracle build. Before I really get into this, I should note that I’m playing Dark Souls: Scholar of the First Sin, but for the sake of brevity I’m just going to call it Dark Souls 2.

Then there’s my pet project Dark Souls 2 run: I’m doing a genocide run. At first it seems obvious; Dark Souls 2 is about murdering monsters anyway so certainly what I’m doing is either redundant or just playing by the rules anyway. This is very much a pet project that I play around with every so often when I don’t feel like actually playing a game. Before I talk about my emergent gameplay challenge, let me give a little bit of background on why I have to do this with Dark Souls 2.

The Dark Souls series heavily features tough mobs of monsters, giant monster bosses, and platforming elements. Bonfires are used as checkpoints throughout the trilogy; they can be rewards for beating a boss or rewards for making it through difficult gauntlets of enemies. Dying in Dark Souls sends you to the last bonfire you rested while taking away all of your souls (currency), humanity (if applicable), and some HP (if applicable). Dark Souls and Dark Souls 3 requires players to improve their strategy, change their tactics, or try going someplace else if you keep dying in a specific place. Dark Souls 2 does something a little bit different: if you kill an enemy then die or use a bonfire, that activates a counter within that or those enemies. Once that timer hits 0, then it will no longer spawn into the level no matter how many times you die or use a bonfire. Dark Souls and Dark Souls 3 also feature enemies outside of bosses who don’t respawn, but in Dark Souls 2 it’s possible to permanently “kill” almost every enemy in the game.

Here’s why I’m calling this a challenge run: in order to make an enemy stop spawning I need to clear out an area and rest at a bonfire between 12 and 15 times depending on the area. There are some areas where that’s much easier than others, but by the fourth or fifth time the routine has trivialized the challenge of a first or second run. Another factor that’s been trivializing the difficulty of this run is just how overpowered I’ve become. Even before taking on the first boss, my player character was close to or just over level 100. I was capable of using large, heavy weapons, but I was also capable of using dex-reliant bows, pyromancy, and magic. My genocide run of Dark Souls 2 isn’t so much a struggle of myself verses the game, but rather myself verses myself.

If this challenge run sounds tedious to you, then you’re absolutely right! Playing Dark Souls 2 like this does get to be tedious; the first couple of times I clear out an area could be harrowing if I’m up against a trash mob, or dealing with hazards that I’m not completely familiar with. The following several times are still engaging too since Souls combat is generally engaging. The most tedious way to clear out an area is to do so from a distance with a bow, but it’s also the safest way. By the time I know I have fewer than 5 runs to go though, before enemies stop spawning, is when I start wondering how much longer it’s going to last and my interest wanes.

There’s another factor that I wasn’t expecting when I started this run. It may not actually be possible to completely despawn every enemy in Dark Souls 2. In the outskirts of Majula, there’s a large stone slab which can grant players access to the Covenant of Champions. Joining this covenant would make my run impossible, so I’m ignoring it. In the Grave of Saints and Halls of Pharros, there are caves I can enter that are shaped like a rat’s head. This signifies those areas as being the territory of the Rat King. I haven’t joined its covenant, so maybe that’s why (after clearing those areas and resetting at a Bonfire over 50 times), enemies continue spawning in.

There’s another area where I’ve noticed enemies continuing to spawn even though I’ve cleared it over 20 times; There are a couple of rooms in Drangleic Castle where, if you kill an enemy inside of those rooms, their souls will power a Golem which activates a switch. One of them is near a bonfire and a King’s Door, the other is near the twin Dragonrider boss room. I assume the enemies respawn in these areas because enemy souls are required to solve a puzzle. If those enemies permanently despawned, a player could be soft locked and unable to complete Dark Souls assuming they don’t join the Covenant of Champions or use a Bonfire Aesthetic. I plan on joining the Covenant of the Rat after I kill Darklurker to see if that will make enemies stop spawning in those areas, but that’s not going to be for a while. I’m also concerned that the fog area in the Shaded Woods will keep spawning ghosts but a part of me wants to give that area up altogether. I also have no plans on clearing out DLC areas. 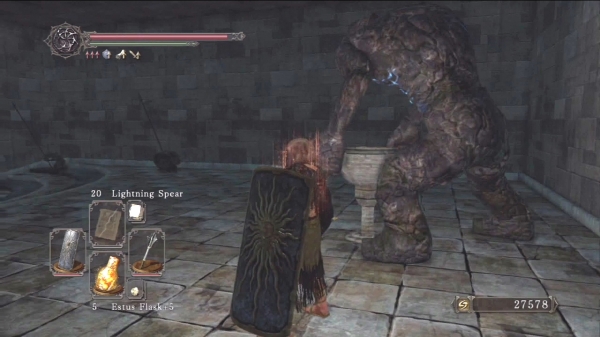 (These guys stumped me for a bit on my first playthrough, not gonna lie)

At the moment my genocide character is at level 178, and after 69 and a half hours I’ve cleared out Things Betwixt (including the Bonfire Keepers), The Forest of Fallen GIants (except post King’s Ring areas and Giant Memories), Heide’s Tower of Flame (I don’t think I’ve killed the Covenant of Blue recruiter yet), No Man’s Wharf, The Lost Bastille, Sinner’s Rise (Except for The Lost SInner), Huntsman’s Copse, Undead Purgatory, The Gutter, Black Gulch, Brightstone Cove Tseldora (up to the Congregation“boss fight”), Drangleic Castle (up to and slightly past the Twin Dragonrider boss fight). I have a long way to go to kill the rest of the game, and I’m taking this challenge very casually. I’m thinking of uninstalling Dark Souls 2 for a while so I can install a thing or two from my backlog. The high that comes from realizing an area is clear is great, but I don’t want to completely burn myself out. I’m also aware that I’ve probably taken this challenge farther than most people likely would have had the patients to.

So what about you? Have you tried a challenge run of any of the Souls games? Are you judging me for not doing something more interesting? Let me know or tell me about your own emergent gaming challenges! Just remember to tag your posts with either #BoB, or #Bandofbloggers when you do!