The Joy of the Sonic Hacking Contest

It's that time once again, folks. Sonic Hacking Contest 2020 is almost here and I am very excited for it!

You might be wondering: "Kazama, what is the Sonic Hacking Contest? What's so great about it?" Well, I'll tell you, good sir!

The Sonic Hacking Contest is a contest where the Sonic community show off their latest romhacks and mods based on the Sonic games from retro Genesis games, to the modern ones. The entries are submitted to the judges for evaluation and they'll be awarded based on the quality of the romhack or mod. The contest has been active since 2002, and this year is their 18th entry in the series.

I've experienced various Sonic romhacks in the past. I remember the first romhack I played when I first got into emulators and roms back in the early 2000's was a romhack called Sonic Gaiden (the 2003 romhack, not the Sonic Mania mod). I had so much fun with that game. But looking back at how far we've come with Sonic romhacks, the quality improves overtime. That goes the same for the PC mods for modern Sonic games as well.

When redhotsonic released a trailer for the Sonic Hacking Contest 2020, I was impressed at what I saw. There were a lot of romhacks and mods that I was looking forward to this year.

Now for the contest itself: SHC2020 has two different entry categories: Contest and Expo. Contest entries are self-explanatory, while the Expo entries are based on fun entries. Think of them as For Glory or For Fun. The reason why they are separated like this is because of what happened with SHC2016 in which there were a lot of entries that were left unfinished or filled with an abundance of joke hacks, leaving the judges frustrated. In other words, it was quantity over quality.

As for the contest entries, the judges introduced three separate categories based on the entries submitted: Retro, 2D PC, and 3D. All of them will be based on what the judges like, what the community like, and other special awards such as the Polygon Jim award for example.

I have a couple of favorite Sonic romhacks and mods that I've seen and played from the contest. Here are some of my favorites:

This year's contest has a total of 41 Contest entries and 29 Expo entries, bringing it a total to over 70 entries overall. I'm not going to list every game here, but I'd like to talk about what I'm most excited for. I think the ones to look out for this year are:

And of course when there's the Sonic Hacking Contest, there's going to be streamers checking out each entry. Here's a list of streamers that will be participating next week:

Lastly, the other best thing about the contest is the memes. Oh my god, the memes for the contest are hilarious. Most of them are based on what we see on the streams. For example, when I was watching Somecallmejohnny's stream for Day 4 of the SHC2019 showcase last year, there were several memes based on CodenameGamma's Chat vs. Sonic Mania, and it was hilarious. Here's one that IanBough created last year: 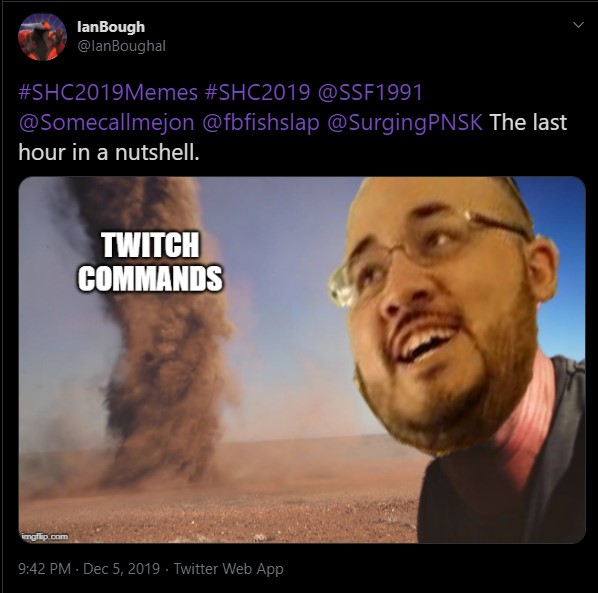 But yeah... I can't wait for SHC 2020 Showcase next week. The Sonic hacking and modding communities are creative when it comes to creating these romhacks and mods for existing Sonic games. And I think this year might be its best one yet based on the qualities of the game shown in the trailer. Aside from the new entries, I also want to see returning ones just to see what kind of improvements were made over the previous year.

If you guys have the time, please check out SHC 2020 all next week. If you want to try these games for yourself, I'd recommend using Kega Fusion for the retro games, and also Mod Loaders for the PC ports of existing Sonic games. And if you haven't yet, please give a follow to Sonic Hacking Contest on Twitter because these guys have been keeping the community strong for years.