Crusader Kings II was one of my most played titles from the past decade.  Originally released in 2012, Paradox Interactive supported their popular grand strategy title for 6 years with over a dozen expansions, offering new game mechanics, systems and playable rulers.  Almost a decade later, a new ruler is crowned.  But as any fan of the series knows, successions are not always smooth, and Crusader Kings III, while making great improvements, still has ways to go before it reaches the heights of its predecessor.

Those familiar with strategy games like Civilization may be used to controlling kingdoms and countries over centuries of in-game time.  The Crusader Kings franchise differs in that one controls a medieval dynasty, and once the character you are playing dies, whether be from old age, disease, or a more nefarious reason, you play as their heir.  In fact, calling Crusader Kings a grand strategy game is a tad misleading.  Yes, there are a plethora of strategic systems to toy with, but at its core, Crusader Kings III is a role playing game.  Each character is given traits, that they are either born with or develop during their lives, that shape their personality and the decisions they make.  For example, my King of Ireland was deceitful, cruel and was taught ways of intrigue during his upbringing, so while playing as him, I decided to embroil myself in court intrigue, conspiring against my vassals and punishing those who opposed me through plots of extortion or murder.  His son was a strong, kind and religious man, with an upbringing spent developing his martial ability.  This character I played as a gallant crusader, who desired to uphold chivalry and gain glory leading his armies personally.  This is where the game is at its best, when one embraces the character they are given and tries to play as them as best they possibly can.  This is not always the best if you want to min-max and build the largest, strongest possible kingdom, but as someone who has put hundreds of hours into this series, trust me in that playing this way will burn you out quickly.  Crusader Kings III also introduces the stress system, which encourages making decisions in line with character traits and punishes one if they make a choice out of character.  You can murder someone as a kind, pious character, but they will recieve a tremendous amount of stress from their guilt of the decision, and will likely suffer a mental break, which can give them bad traits and severe health penalties.

Skill trees are a new addition, which allow your ruler to focus on learning new skills from specific lifestyles

One of the prevailing narratives about the Crusader Kings series is that they are very difficult to figure out, partly due to the complexity of the game’s systems and mechanics and partly due to the opaque nature of the beginning tutorial and further in-game explanations.  I had no issues jumping into Crusader Kings III, but I am sure that new players will initially struggle to grasp the enormous amount of information thrown at them when they begin.  It still is a game with a steep learning curve, but when comparing this tutorial to that of its predecessor, III does provide more guidance as well as information explaining concepts that will only be novel to returning players.  Don’t know what a demesne is?  One can simply click that or any other term for a useful explanation. 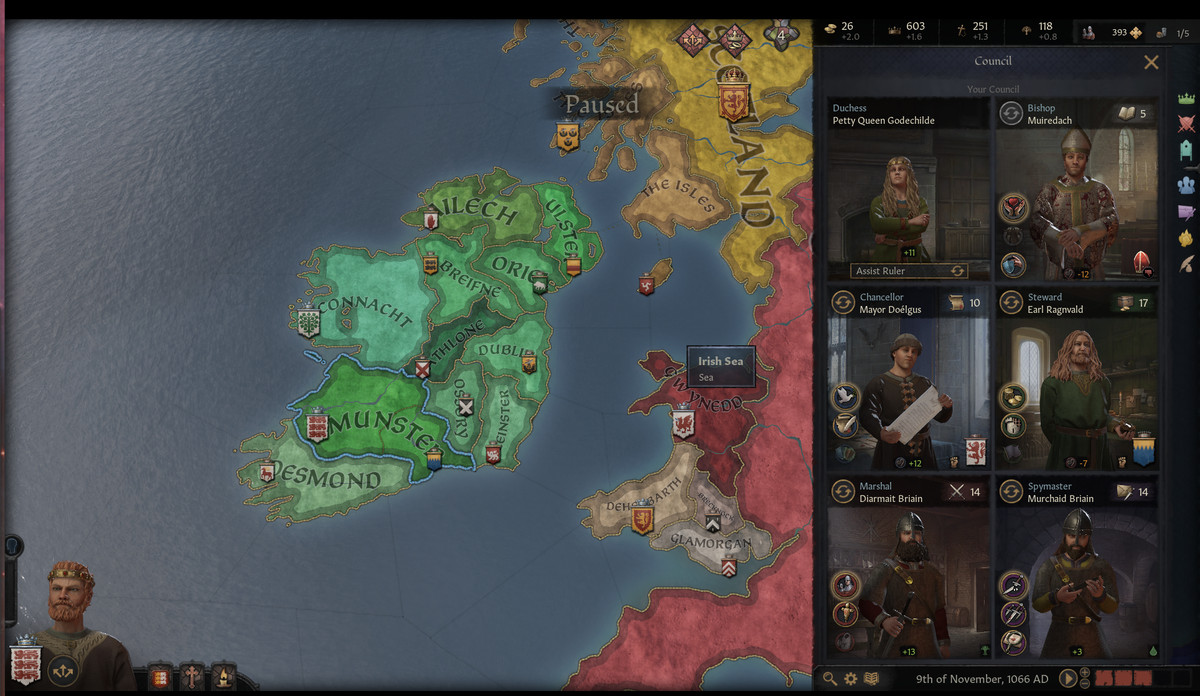 As for the additions themselves, they are instantly noticeable.  As much as I loved Crusader Kings II, even I could not deny that the character portraits representing in-game rulers were excessively, and often - hilariously - awful.  With this new installment each ruler is depicted in unique, expressive 3D models.  It’s a simple and obvious change, but it does wonders to enhance one’s role playing experience.  A new mechanic, hooks, allows you coerce those who owe you a favor in devious ways.  These are similar to “favors” from Crusader Kings II’s Conclave DLC, but allow for more flexibility.  One can use blackmail, fabricated lies, or even their own allegiances to “hook” one’s subjects into doing anything from accepting marriage proposals to declaring war on a neighboring vassal.  Religion also received more customizability.  Player created custom heresies mean you can branch off and create modifications on the traditional dogmas of the time.  Subtle changes like the role of women and sexuality are on the table, but one can go absolutely crazy with some truly insane choices like adding ritualistic cannibalism or mandatory nudity to one’s newfound faith.  There’s a great deal of customization here.

We are early in Crusader Kings III’s effective life cycle.  We can expect years of updates, expansions and bug fixes to build upon the current foundation to make this game even better.  But going off what we have in front of us now, I would be remiss not to mention the flaws that are currently present in this state of the game.  These may be fixed in a short time, but they did affect my experience.  There are ways to exploit the game that honestly should not be possible.  It is too easy to horde your entire kingdom's holdings, to the point where one becomes so powerful that negative vassal opinion modifiers do not matter.  I expect this to be ironed out in short order.  In general, hostile schemes are far too easy to execute, especially seduction.  This mechanic was fun in Crusader Kings II, but having every single child secretly being a bastard as a result of broken AI seduction isn’t realistic or fun.  Warfare is largely simplified, removing naval levies combining your forces to one location, called a rallying point.  This is an overall positive and removes the excessive micromanagement that was necessary in II while controlling large armies.  However, the lack of a tangible navy - armies can embark on water for a small fee at any time - does make it a bit too easy for the AI to escape to sea whenever your army corners them, which is frustrating to deal with and not particularly realistic.

The in-game map is more realistic than ever, but clicking on some of the smaller barony icons can be difficult

And another, unfortunate yet predictable downside to Crusader Kings III is that while there is much to do, it does feel like a step back in some respects compared to Crusader Kings II with years of expansions and updates supporting it.  Many additions were carried over, such as the council from conclave, lifestyle perks and skill trees and perks from way of life.  While it is miles ahead of vanilla CKII and probably a better game than CKII now, it is lacking in flavor in both the lack of random events and little touches like the screaming sound bites after a character assassination or the sound of gold clinking after paying a bribe, which are inexplicably absent.  They are small touches, but they are noticeable.

Despite a few hiccups, Crusader Kings III is a worthy sequel to one of the most ambitious strategy games of our time.  I have no doubt that I will soon put hundreds of hours into this game, and with numerous expansions and support on the horizon, we have likely only seen a sliver of this game’s potential.  Even still, that sliver is a worthwhile experience and one that will keep me, and any strategy fan looking for a deep experience, engaged for hours on end.