Ghost of Tsushima Review: Freshness in a Spoiled Genre

Stale is a word that could best describe the current state of the open world genre.  Within the past decade developers have been told that more is more, and more stuff to do means more fun for the gamer.  An established formula has long been established, with side diversions such as outposts to clear and random collectibles to gather.  Ghost of Tsushima is a game that does little to subvert genre conventions.  Players control Jin Sakai, a samurai who explores the island of Tsushima and fights to free his island from the invading Mongol horde. Clearing camps, finding collectable vanity accessories, and climbing shines - the game’s version of the ubisoft tower that uncovers large swaths of the map - these are all on the menu.  If you have personally grown tired of this genre, this might not sound particularly appealing.  However, I found that improvements made to the established formula elevate it to the best of its contemporaries.

Ghost of Tsushima succeeds firstly in nailing its setting.  Feudal Japan is recreated in exaggerated splendor, and getting fully immersed in this world is where it really shines.  Rather than clutter the screen with quest markers and objectives, the natural world is Jin’s guide, and following the path of the wind, birds and foxes will usher players to their next quest or secret.  It’s a small touch, but it's much better than following glowing footprints around.  The amount of quiet downtime the game allows is exemplary, and Jin can visit hot springs, compose haikus, and climb shrines, which are worthy diversions that do not involve constant combat.  These tranquil distractions bring character to the island, and do wonders for the game’s sense of immersion.  Ghost of Tsushima gives you time to breathe, and the game is better for it. 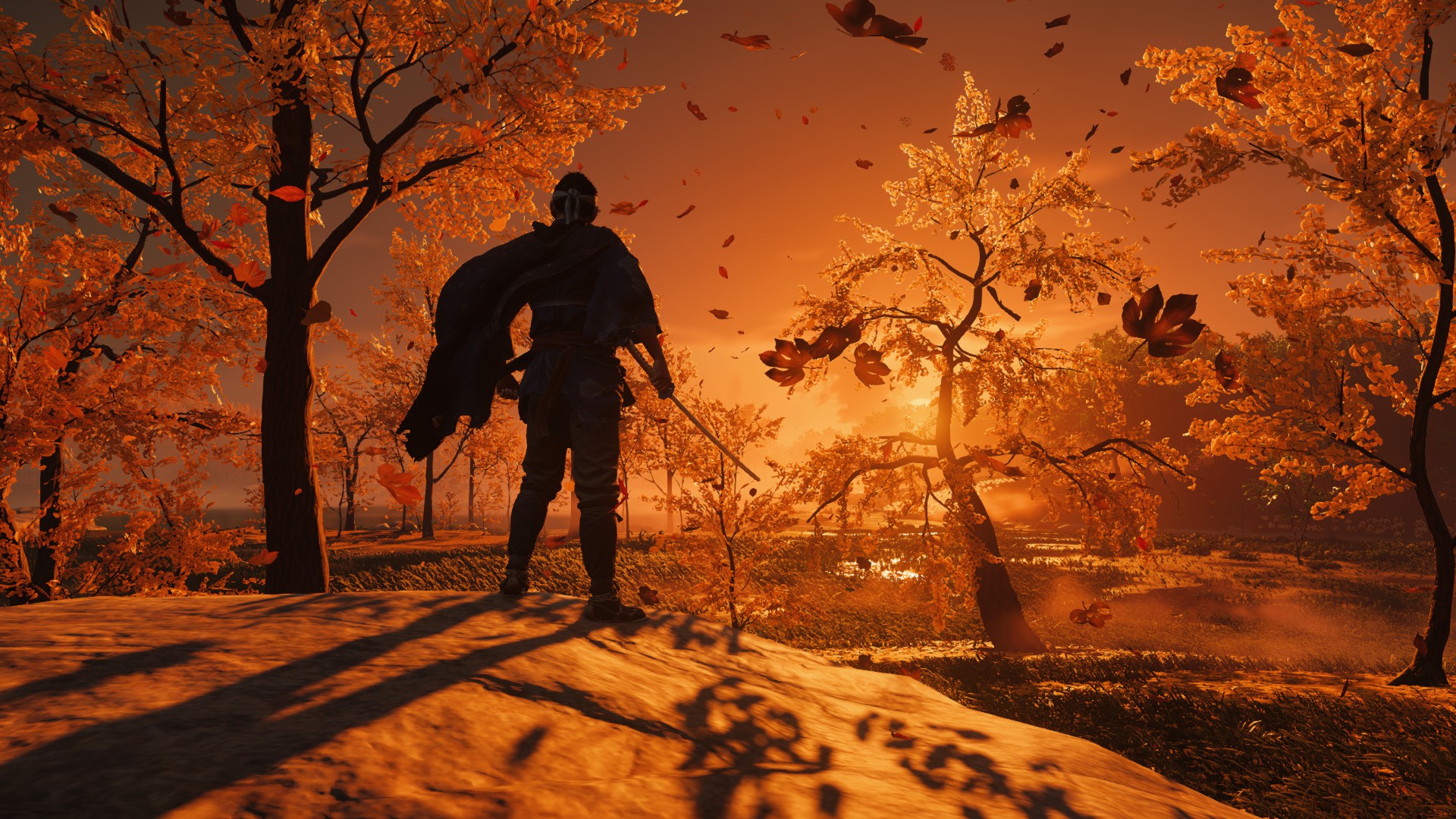 The island is divided into three zones, and the game follows a three act narrative structure which begins with aiding and recruiting allies to help you overthrow the invading Khan, and ends with liberating mongol occupied castles in intense, cinematic sieges.  While to some the gated structure to the world map may feel restrictive, each section is big enough to enjoy on its own, and unlocking each new section provided a sense of newness that can be easily lost in many open world games.  Enough cannot be said not just about the graphics, but most importantly the art design.  They did a tremendous job of making Tsushima a fantastical world to explore.

Gameplay is simple, but satisfying.  There are two distinct styles of combat in Ghost of Tsushima, the Samurai style, and the Ghost style.  The path of the samurai is seen as noble, while the sneaky tactics of the Ghost as dishonorable. However, players can choose to be as sneaky or as loud as they please, with no story repercussions based on player agency.  This is nice from a gameplay perspective, but I wish there were more significant story changes based on player choice, as certain story beats do not make sense if one sticks to a certain playstyle.  Jin’s uncle reprimanding him for using dishonorable ghost tactics will leave some scratching their heads if they have chosen to play as a righteous samurai.

As a samurai, Jin can switch between 3 sword stances to counter the different combatants you will encounter, akin to rock-paper-scissors where one stance is weak to certain enemy types and strong versus others.  This keeps combat fresh, and adjusting between different stances introduces some visual variety to sword fights.  You have two attacks, a parry and a few limited combos, but despite the relative simplicity, attacks are weighty and satisfyingly animated.

While one can engage in combat as a traditional samurai, one can also engage in less honorable tactics, using stealth, trickery and cunning to defeat foes as the “Ghost”.  This style of play is what you may expect from a third person action title.  You do a lot of hiding in grass, using tools like the blowdart, bow, and lures to distract and quickly dispatch enemies.  While enemy behavior is not incredibly complex, one is given enough tools at their disposal to enjoy their time as “the Ghost”.

The story in Ghost of Tsushima is by the numbers, but for the most part executed well.  It’s a very serious tale, but I enjoyed the themes of loss, honor, and familial duty that are pervasive though the “Tales of Tsushima” which are side quests that flesh out the island.  While some quests can get stale quickly, specifically those that fall into tired structures such as “liberate X villages”, the majority of quests not only offered unique gameplay experiences, but also always introduced new lore or character development towards either Jin or his comrades.  This is a game that is enhanced by its side content, and shines compared to other games that include missions detached from the main narrative and exist to pad the game to fulfill some qualifier.  In an open world game, this is critical, and I can honestly say that Ghost of Tsushima’s intertwined narrative between main and side missions is some of the best I’ve seen in the genre. 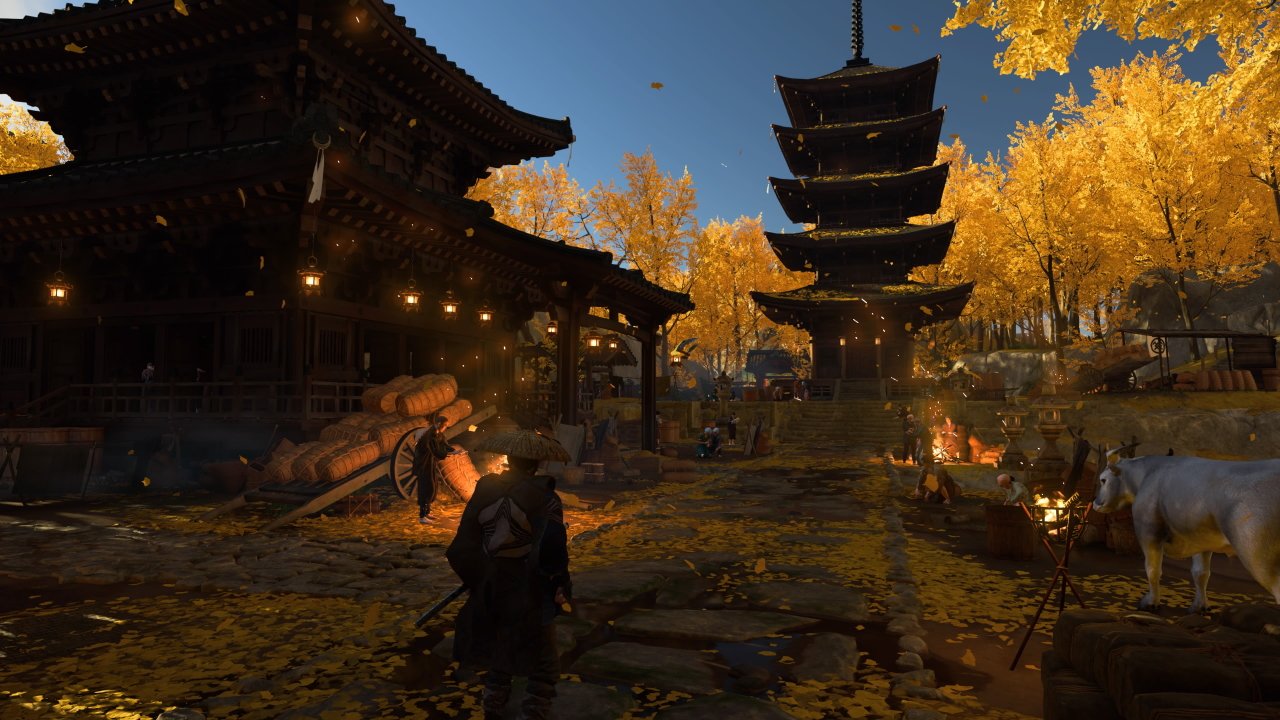 While Ghost of Tsushima isn’t the most innovative game, I was taken by the comprehensive finished product and how unfatigued I felt even at the end of my first 50 hour playthrough.  Perhaps the biggest praise I can give the developers is that I just enjoyed the game, which is not something I find myself saying often anymore about open world games.  There’s tons to do, but not bloated.  It’s a simple game, but not boring.  And while there may not be something you can point to in Ghost that moves the genre forward, sometimes just being a good game is enough.  Ghost of Tsushima is a great open world experience, and I recommend it to even those who may feel burnt out of the genre.