In many ways, Matrix Software's Action-Adventure games were invariably inspired by and compared to The Legend of Zelda series. In fact, the original Alundra was heavily inspired by A Link to the Past both in its look and structure.

Carrying on, you would guess that its 3D sequel would be inspired by Ocarina of Time. Yet, that's not the case, as Alundra 2 attempts to basically be a 3D looking top-down Action-Adventure game.

In that departure (which didn't age well), and in its more lighthearted story, the game was a disappointment to fans of the original. Yet, despite its shortcomings, and because of some of its quirks, I actually think that this game was unfairly rated at the time. It' a really charming game that I would remember long after I forget the original. 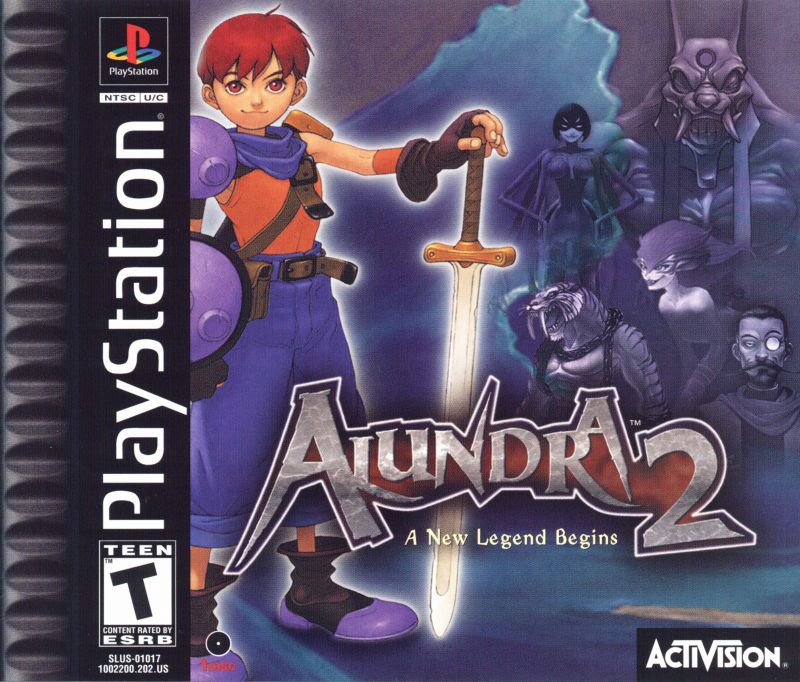 "My father, the king, is missing and Baron Diaz put a wooden puppet in his place on the throne"

To start, this game has nothing to do with the first Alundra except the name and the genre. The story is very different, focusing on a more humorous and lighthearted tale. In many ways, the story is the opposite of the dark, serious, and somber tone of its predecessor.

This has probably upset fans of the original, who see this game's story as childish and filled with cliches. Yet, in the context of the time, where many games were attempting to tell edgier and ore serious stories, this was actually against the grain. Also, the game's story wasn't filled with cliches as much as a celebration of them. 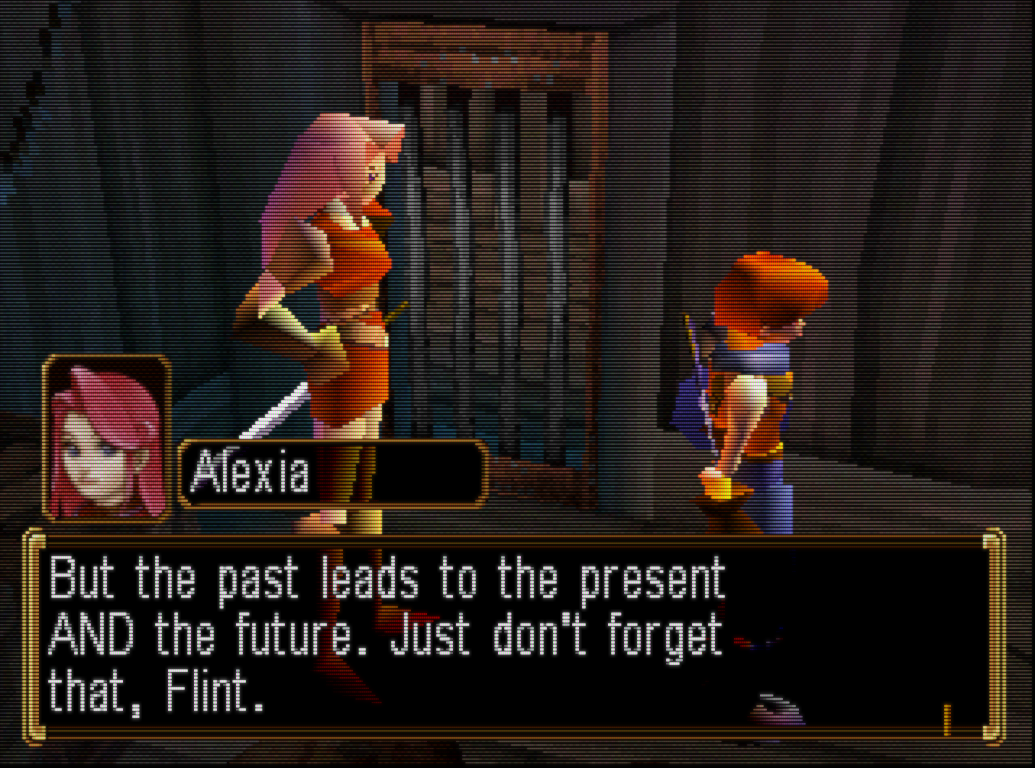 The princess (who is taller than the main hero) isn't simply a damsel in distress. Also, the amount of times you get imprisoned is surely a riff on the old JRPG prison escape cliche

I can't say this enough, the story is fun, charming, and downright funny; relying upon and succeeding in using a lot of slapstick humor. The irony is that game's central conflict has a rather dark edge to it. Right at the start of the game, a giant clockwork key falls on a giant whale corrupting it with dark magic, and the whale suddenly transforms into a mechanical monstrosity. Soon, you realize that the sorcerer Mephisto is planning to use such key (in smaller sizes) to control and enslave many humans.

Aided by princess Alexia, who is not a damsel in distress (for most of the game), you embark on a fun adventure to figure out what is happening. Unfortunately, the game's second half is not as engaging as the first, focusing more on humor than more solid characterization. 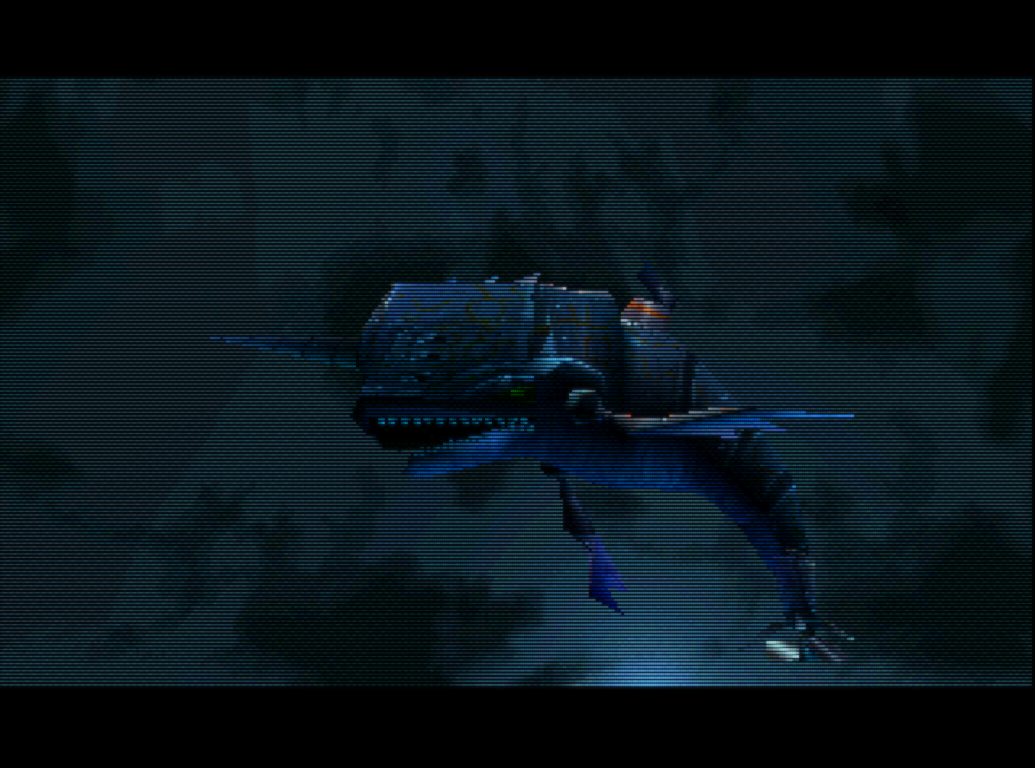 Here is the mechanized whale (which you will meet later)

Still, with a solid supporting cast of misfits, which includes a dysfunctional pirate family, the game always takes the chance to get a laugh. Sometimes, that happens even at the game's darkest moments, all the way up to the climatic end of the game.

"Aaah, the children of the crown. I thought you were just a child's game but such an imminent threat calls for an imminent response"

Following the Zelda formula but without much of an overworld, the game consists of several puzzle-heavy dungeons interspersed with some light combat. Instead of tools and weapons that you gain in each dungeon, you get access to four elemental rings with limited direct involvement in puzzles.

Like the first game, platforming has a big role in a big number of puzzles. This fine for most of the game, but sole late-game puzzles are very unforgiving in their demands with a lot of wasted time being the punishment for failure. 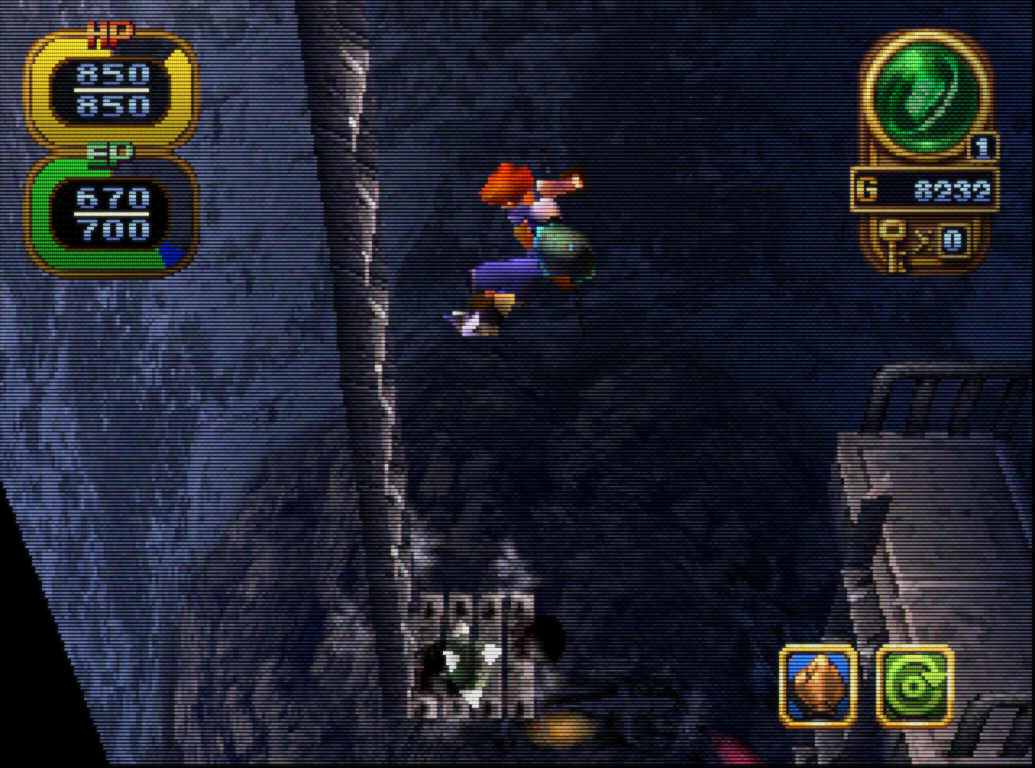 Missed a jump? Now do it all over again

Generally, the game loop is fine. Combat is straightforward and starts to open up a bit more with more magical elements and combos that you unlock, but it is not a strong point of the game. That's made apparent with the game's bosses, who are more puzzle focused. Like the game's puzzles, the bosses require a lot of action gameplay, but actually figuring out how to hit the bosses is more of a puzzle than a direct battle.

Basically, your enjoyment of the game depends on how much you enjoy solving light puzzles with some light platforming action. Of course, this doesn't mean you won't be frustrated by some of the game's more obtuse or precise platforming puzzles.

"You know what I think about heroes? They make a nice lunch."

Outside of dungeons, the game has some light roleplaying problem-solving in several locals along with a good number of mini-games and distractions. Unfortunately, despite the charming NPCs, there aren't many side-quests to speak off.

In fact, one of the game's best storylines (the story of Pierre and his wife) would have been a sidequest in any other game, but Alundra 2 just had to include it in the main story for its comedic value alone. 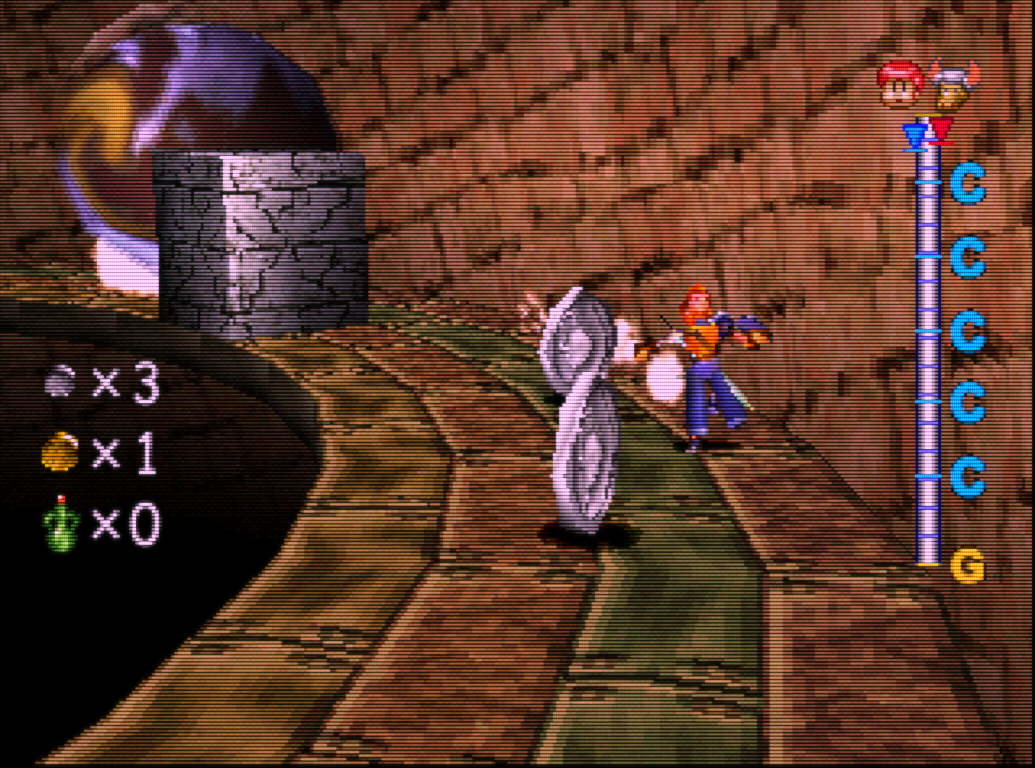 There is also a variety of one-off game modes

Without much story content to tackle outside of the critical path, you have to make do with a big number of silly minigames that hide puzzle pieces, life containers, and magic containers as rewards. One of the best distractions is the bullfighting mini-game which serves as a reliable money generator. You don't actually do much in the game except bet on bulls (its just an RNG game), but the cinematic introducing the game is really funny.

True, few of these mini-games are actually fun, and there is nothing much to do in the cities but looks for a few puzzle chests, but these do add a lot of character to the game, especially when you meet crazy NPCs like the Cow Princess of Toledo or the greedy child merchant (who you can royally cheat).

"I know I'm a good actress, but this is ridiculous! Did you forget my beautiful face?"

So far, I have been mostly positive about the game, but here is where my main point of criticism. No matter how you look at it, Alundra 2 aged in an exceptionally ugly way.

While the in-game 3D graphics aren't so bad, they are zoomed-in to a ridiculous degree, which has both visual and gameplay implications. You feel like the camera angle should have been more isometric than top-down. Still, the graphical engine doesn't show its entire limitations in actual gameplay.

That's exposed during the game's many in-engine cut-scenes. Here, the graphics morph into an indistinguishable polygonal soup, where character faces contort with no control, and the 3D shapes start tearing at the seams. It looks ugly, there are no two ways about it. 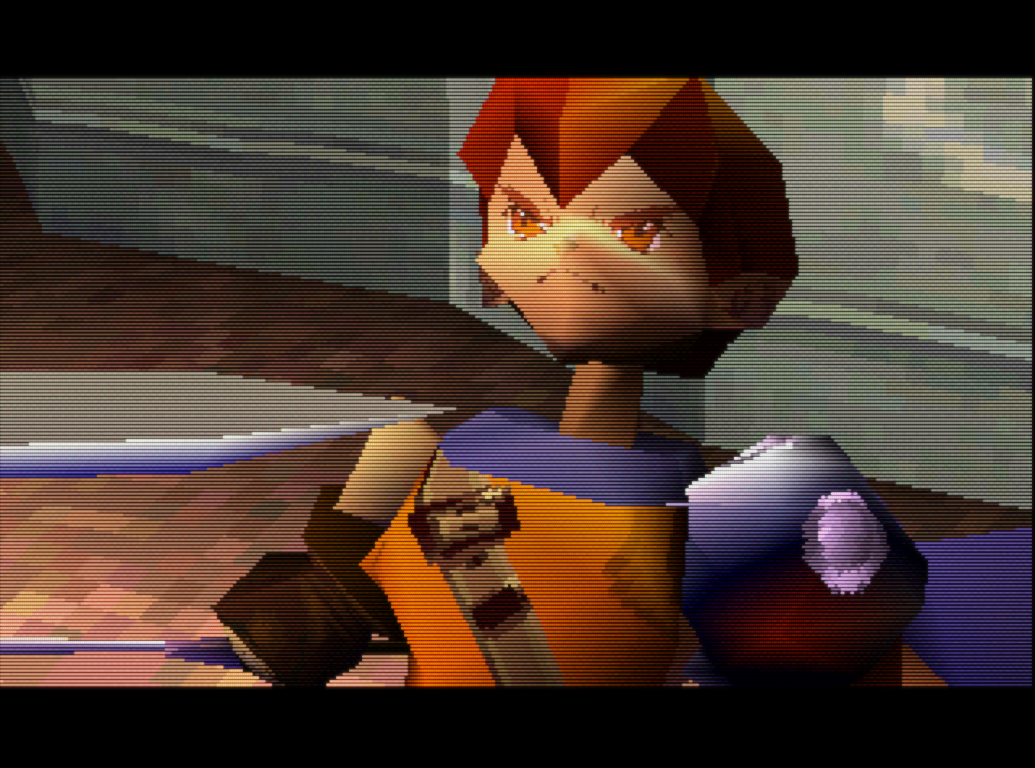 Is this supposed to look human?

Yet, even at its ugliest, Alundra 2 somehow is still charming. That's because the scene direction is masterful. Through its exaggerated movements and slapstick comedy, the characters are able to express a range of personalities that their distorted graphical representation cannot. Scenes are constructed in a way that works beyond the game's graphical abilities, and it would be nice to see how it would look like in a later generation.

This is aided by mostly solid voice acting, with only the occasional awkward delivery, which is surprising for a PS1 JRPG (guess the Activision localization delivered). I think that's because the over-the-top delivery works for this crazy cast of characters.

One element that is slightly disappointing is the game's soundtrack, which is not nearly as unique and interesting as the first game. I think that's because of this title's more quirky nature which didn't gel with the more atmospheric and mysterious style of the original's compositions.

I am struggling very much in giving a final rating to this game. In one hand, I feel that the game was unfairly criticized at the time for being a goofy departure from the original's somber story. In the other, the game' graphics didn't age well and it has some of the same gameplay issues as the original.

As such, I am basing my final judgment based more on feeling than observation, and I feel that Alundra 2 is, despite its flaws, a more charming and memorable game than the first. Yet, due to its 3D graphics didn't age well and they bring the game down. 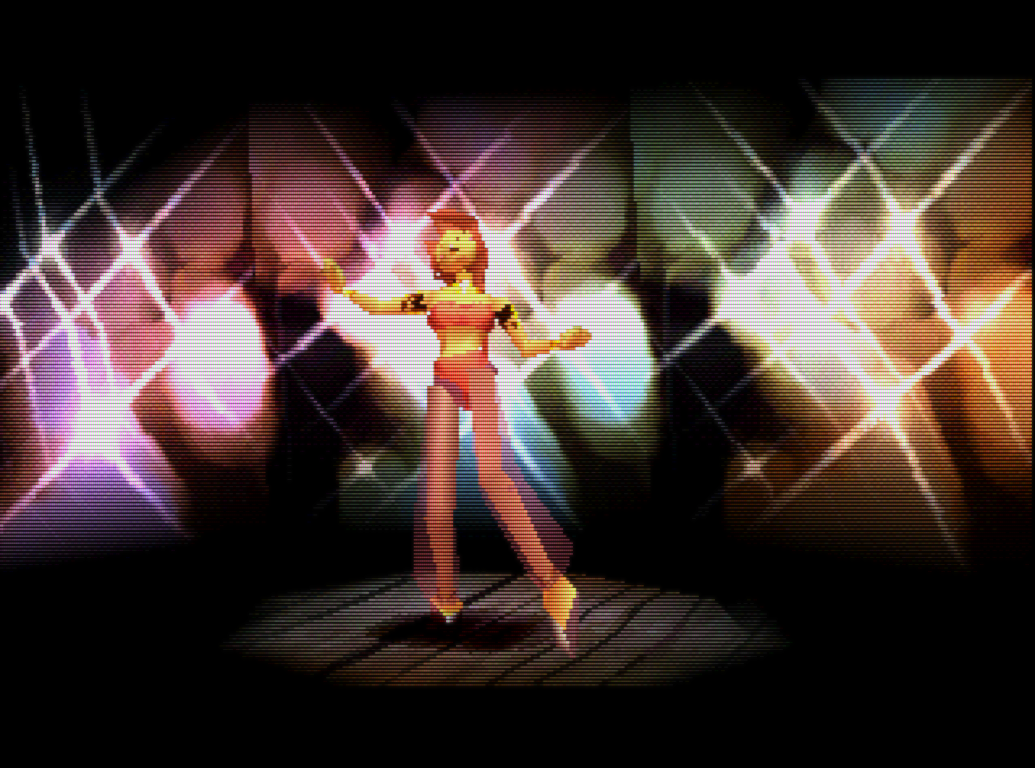 I think this is supposed to be sexy...

1-Collect puzzle pieces and give them to Jihan to unlock more combo moves (Getting to level 3 is a must).
2-Utilize the Bull Fighting game to get money, which you can then use in a late-game island to buy a very useful attack ring.
3-Talk to NPCs to figure out where to go next.
4-The green magic ring allows you to hover in space, which is useful to wait for platforms to get in place.
5-A lot of puzzles require some platforming skills, so get practicing early.
6-Your running jump covers a lot of space, learn to use it.
7-Platforming works in set levels, so you can't vertically jump over two blocks. 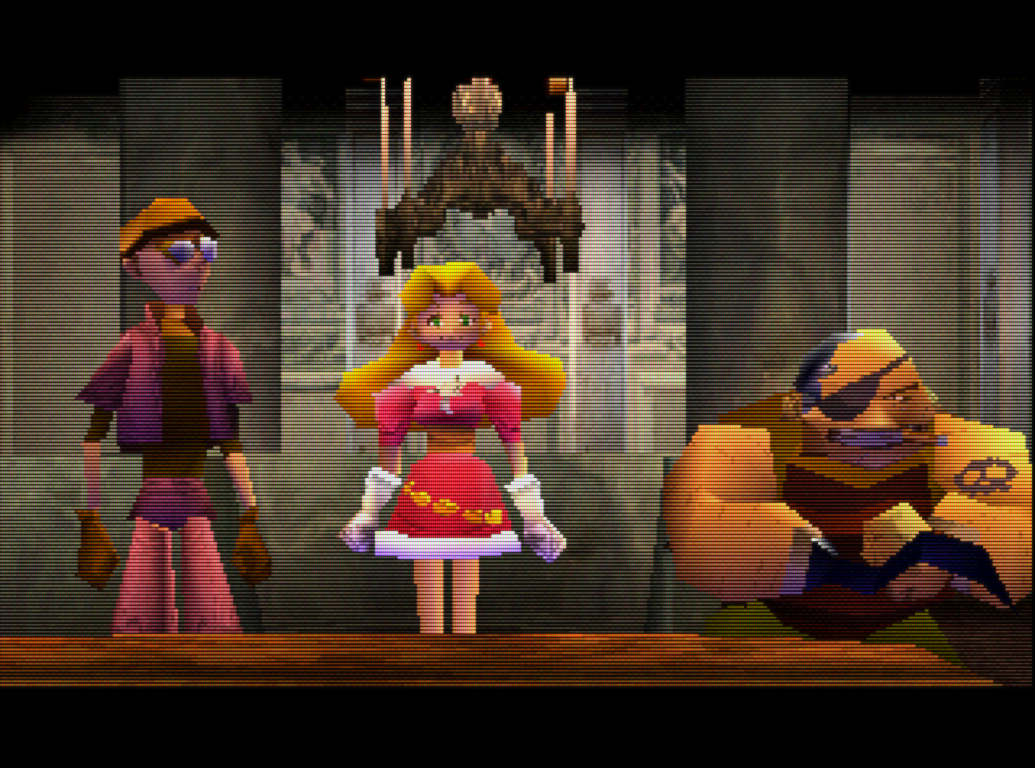 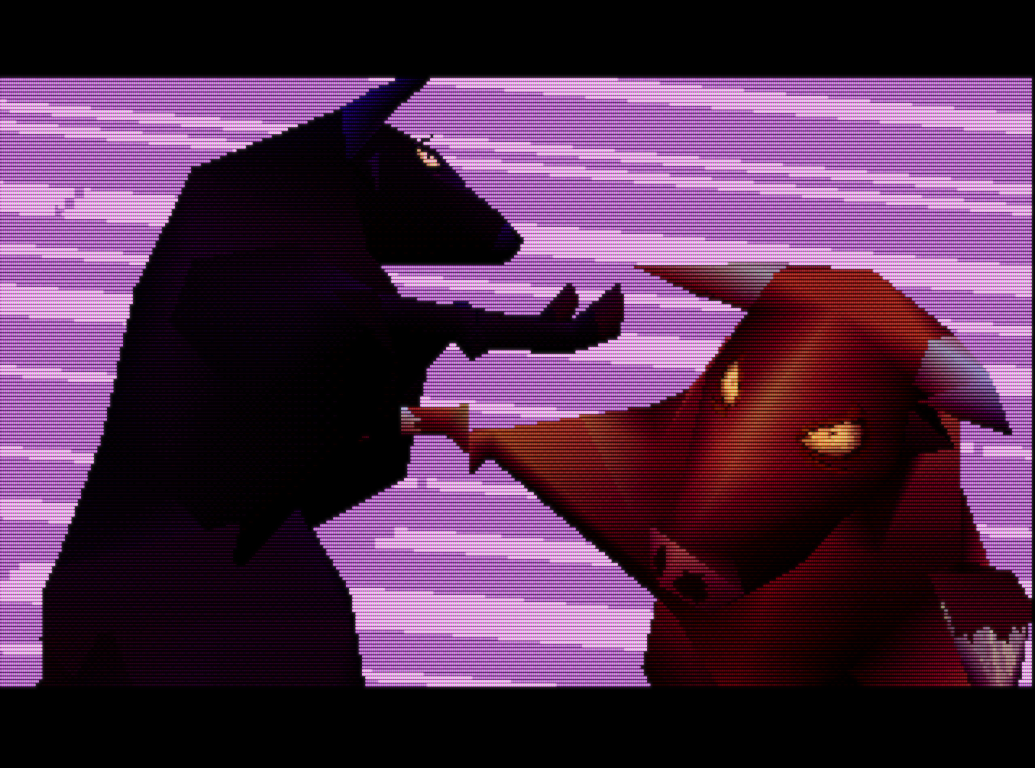 Enjoy your downtime with some LITERAL bullfighting

I enjoyed both Alundra games, and even if I prefer the second one, I recognize that it aged poorly and consequently may be less fun to play than the original. However, if you are willing to look beyond the game's aged graphics, then it is a fun and charming game with classicly hilarious Japanese comic sense.

The next game in my review series is Star Ocean 2: The Second Story at #78. Originally, I wasn't going to review this game since it was remastered on the PSP, However, I noticed that there wasn't a consensus on which version is better, so I am giving the PS1 version a shot.