Ape Escape is a 3D platformer developed by SCE Japan Studio and published by Sony for the PS1 in 1999. It was also remade for PSP in 2005. The game begins with an amusement park monkey named Specter getting his hands on a Peak Point Helmet, which raises his intelligence. Armed with his new perspective, Specter mounts a monkey insurrection against humanity by giving his fellow apes helmets as well.

He seeks out the inventor of the Peak Point Helmet, the Professor, and assaults his lab. In doing so, Specter activates the Professor's Time Station, which sends Specter and his monkeys back in time with the intent of changing the course of history in favour of monkey-kind. But it just so happens that the Professor was visited by Spike and his friend Jake during the attack. The both of them were caught up in the time warp and separated, with Jake ending up brainwashed by Specter. So it falls on Spike's shoulders to catch all the monkeys wreaking havoc across time and rescue his friend. 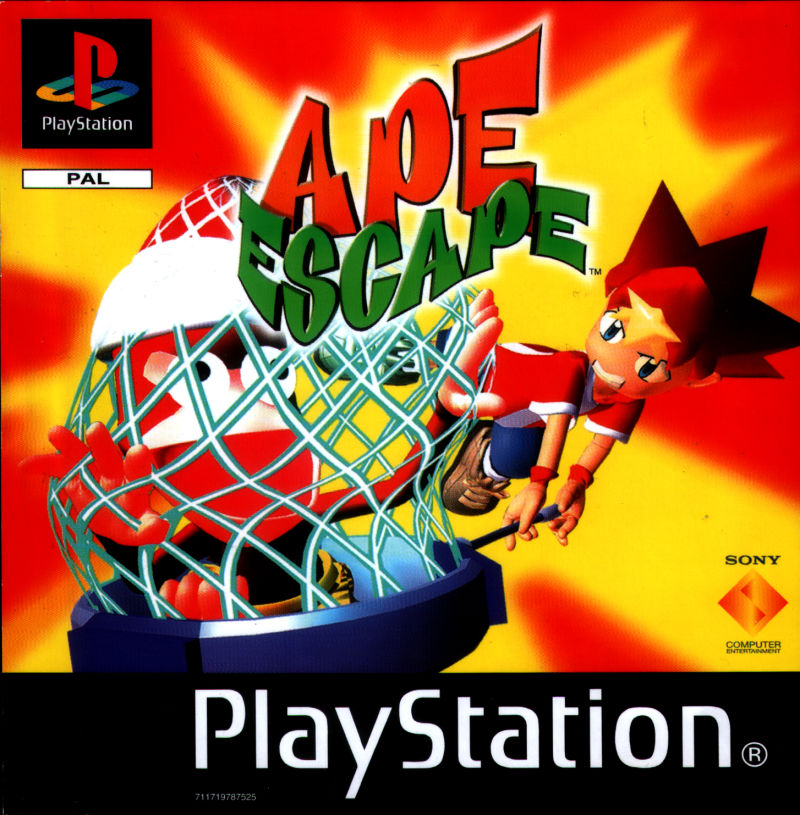 Now, it's obvious that the plot of Ape Escape exists merely to justify a varied set of levels where you get to catch monkeys doing weird stuff. But I still find it worth talking about, even if it's quite a mess.

The first thing of note is that there are four (!) different English localizations, a US one, a UK one and different US and UK ones for the PSP version. What kills me is that none of them are truly superior in my opinion, as they all have their strengths and faults. The original two have really shoddy voice direction, making certain characters feel off. Not to mention the choices done for the casting. US Specter is incredibly whiny compared to his suave UK counterpart. And don't even get me started on whatever the hell happened to UK PSP Specter. When it comes to our main character, UK Spike can't act for the most part compared to the US one, though I still prefer the UK one in gameplay.

The US PSP version has the most competent localization, but I don't like the Spike provided by Richard Steven Horvitz, especially during gameplay. It's a very...nasal performance. Across the four dubs, there is a good cast, but you just have to pick your poison and live with it.

The story is also poorly paced, with a lot of it being back-loaded. After the initial cutscenes, it takes quite a while for the story to resume. Not to mention that it feels like there is material missing, as the game starts droning on about "true strength" in the last level, which feels really forced. The game tries to draw a parallel between Spike's "everyman abilities" and Specter's helmet powers to make some sort of point, but it doesn't really land. 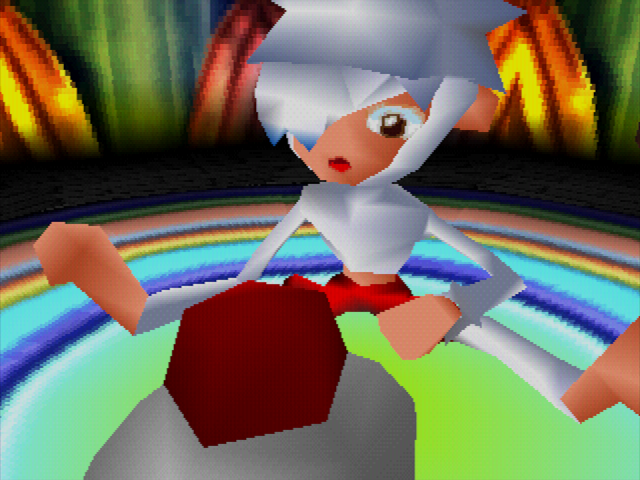 Still, in spite of all that, I think the last chunk of the story is really rad, as Spike and Specter have a decent dynamic. The game treats itself rather seriously, which somehow works. It's like there's this tiny bit of 90s mecha anime injected into the game just because. Hell, the whole series has a bit of mecha influence in it.

The complete story package isn't really good, but most of the pieces are there at least. If only Sony would remake the damn thing again and give us a definitive version of the story.

Ape Escape's claim to fame within the annals of gaming history is its required use of dual analog sticks. It was the first game to require a Dualshock controller and has a unique control scheme to reflect that. Spike's movement is tied to the left one, but the right stick is used to control the various gadgets he has at his disposal.

It's a bit to get used to, but it works rather well, save for how awkward it is to move while crouched. I'd have preferred the option to toggle crouch on and off. The swimming is also a bit clunky, since you dive by pressing a stick.

Now, with all that in mind, I can't for the life of me understand why it was decided that the game should be ported to the PSP, a system infamous for it's lack of a second analog stick and secondary shoulder buttons. The PSP control scheme just barely functions, but one of the gadget buttons had to be sacrificed in the process, making it so that you have to go to your gadget menu to swap shortcuts more often. So let's just ignore the PSP version and focus on the intended PS1 experience. 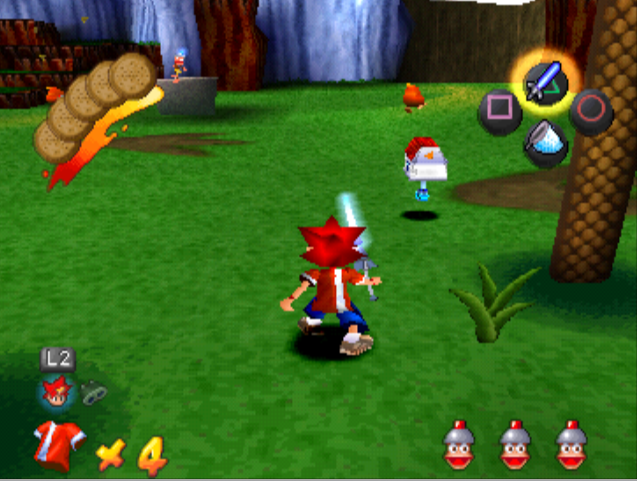 Running around and using the gadgets at the same time works well, giving you a lot of precision when trying to attack enemies or catch monkeys. The actual platforming is a bit slow for my taste, as Spike loses a lot of momentum through his double jump. Thankfully, there is a flight gadget available to let you correct mistakes before falling to your doom.

The monkeys (and the catching thereof) are the highlight of the game. They are what amounts to a combination of advanced enemies and unwilling collectibles. It's such a genius idea. There are a lot of variants with different stats and equipment, some of which act like mini-bosses or hidden secrets.

They have so much personality and are a blast to outwit, since you can use a mix your favorite gadgets and stealth to catch them. The stealth system is simple, but surprisingly solid. Monkeys who are calm can be snuck up on, but must be hidden from whenever the light on their helmet turns yellow and they look around. But they are not to be underestimated, as some of them are heavily armed and can wreck you really easily.

There are also a pair of vehicles to use for some sections, a tank and a boat. The tank is fun, since each stick simulates a tread and it's heavily armed. The boat is less fun, as each stick controls Spike's arms and need to be moved in unison to row properly. I find it difficult to move with grace to this day. Just getting off the thing can be awkward and is partially to blame for my thalassophobia, I'm sure. The giant fish in the game are freaky bastards to a kid, I tell ya. 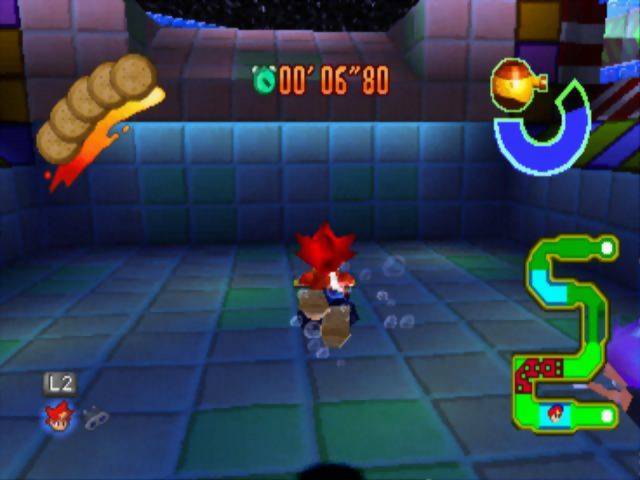 With all of time being available, the game's levels are quite varied, spanning from the age of the dinosaurs to modern day. While initial levels are small, the game quickly delivers dense levels full of branching paths with monkeys everywhere. Thankfully, you are provided with the Monkey Radar just as the levels start getting complicated, making it unlikely for you to get stuck. Of particular note are the "boss" levels, which are gigantic (mostly) interwoven levels filled with more monkeys than usual. They are a real treat to explore, especially the last one, which builds tension really well as you ascend it.

Another thing that really elevate the levels (and the game as a whole) is the incredible soundtrack. Shying away from standard music styles in platformers at the time, most songs have a very high BPM count, making them very energetic. But beyond that, they are just very diverse and memorable. The main theme and final boss themes in particular are excellent.