Alundra is widely considered a spiritual sequel to the great Genesis game, Landstalker. Yet, other than the clear A Link to the Past (ALttP) influence, the game is nothing like it.

It has a much more serious story, and the gameplay loop is now even closer to ALttP. In fact, if you want to consider this a "Zelda clone", then this is clearly one of the darkest, and best of "the clones". 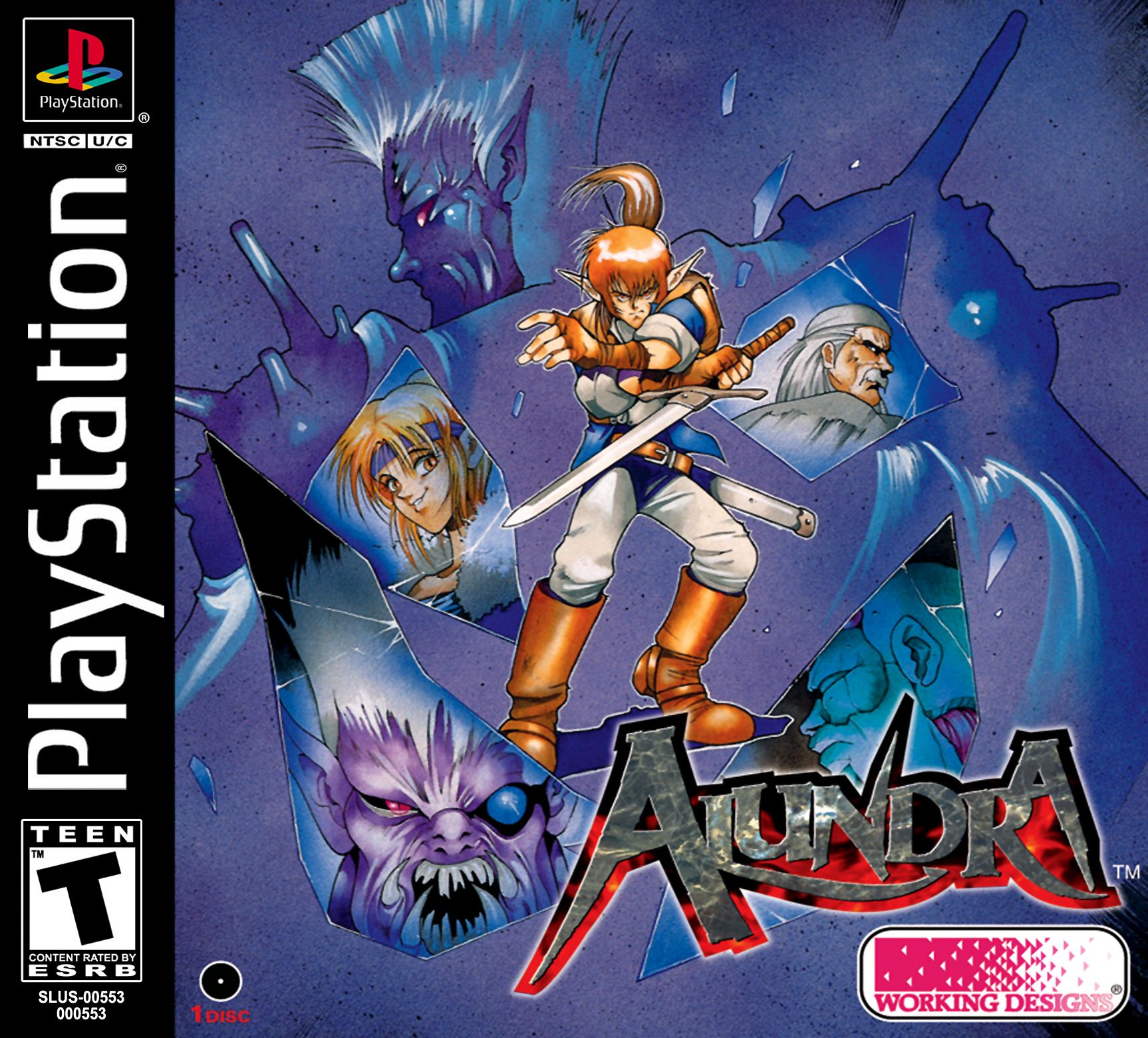 "A legend is written of a boy with a mark in his forehead. He is said to be at once blessed... and cursed... granted the awesome power to enter the dreams of others as they slumber"

The story is front and cent in Alundra. Starring the titular character, the story starts with his sea voyage going awry and washing ashore next to the village of Inoa. Somehow, this village is finding itself as the forefront of the resurrection of the evil god, Melzas, and Alundra is thrust into the role of the village's savior.

While the story may nominally about saving the world from Melzas, it is made more intimate by its focus on the village of Inoa, which is one of the most unfortunate places in gaming history.

This small hamlet is beset by misfortune from the start of the game. Since destroying their religious idols at the order of the king, they have lost their creativity and started having disturbing nightmares. Nightmares that would cause great misfortune if Alundra, who discovers that he is a "Dreawalker, couldn't enter and save the villagers. However, the game isn't afraid of getting dark, and you discover the limits of your efforts as you fail to save some villagers. 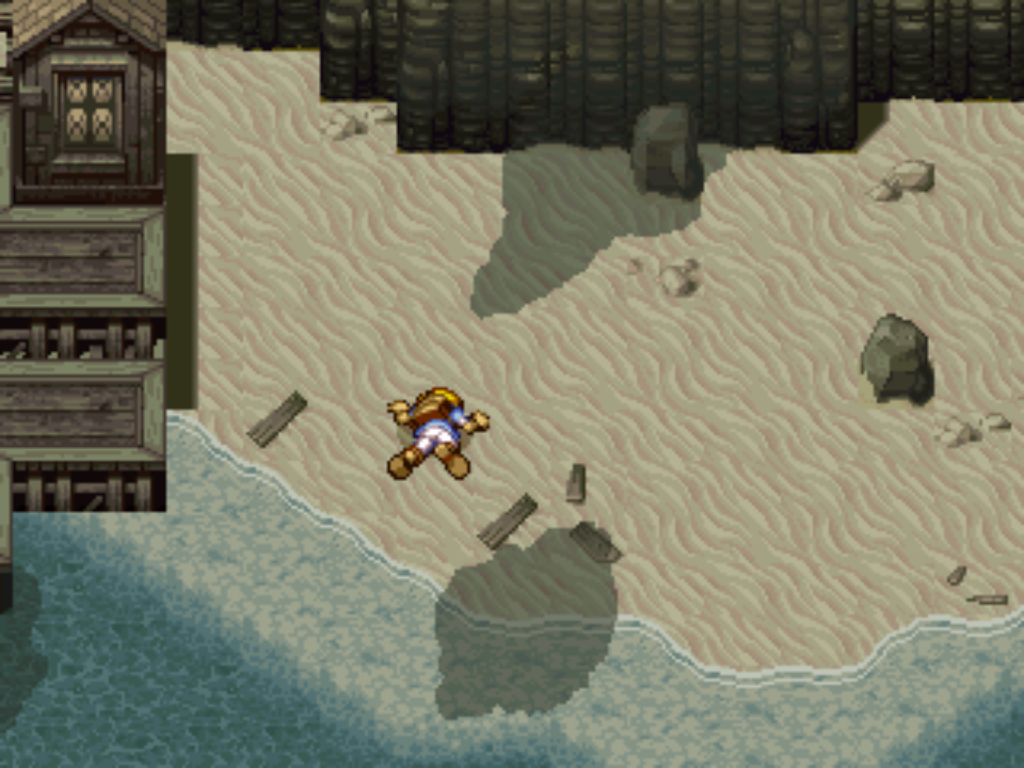 Like many JRPGs, the hero finds himself washed ashore in a strange land, not knowing what to expect

Emotionally, that's a bit draining, since the game does an effective job of making you care about the characters through extensive dialogue and smart and consistent characterization. I found myself caring about most of the villagers in Inoa, and that's mostly helped by Working Design's excellent localization.

Let's get this elephant in the room over with right now. Working Design's localization ingests its own brand of humor into the game, which works fine sometimes, but is sometimes terrible and distracting in noticeable ways (Bonaire's entire dialogue is cringe-worthy). However, the dialogue flows well and the story is well-told.

Overall, Alundra has a great story by the standards of the time that is still good today. It's not afraid of going to dark places (too depressing at times) and is thematically interesting. The village of Inoa becomes a believable place that you care about, and that's a huge success in my book.

"You make me laugh feeble one! No one has the power to stop me now! Especially not a miserable human"

Soon after you begin the game, you realize that this is heavily inspired by ALttP but with the crucial addition of a jump button, which makes a crucial difference. Namely, the fact that there a lot of platforming challenges in addition to the expected puzzles and combat set-pieces.

The main gameplay loop consists of going to dungeons and getting a pivotal item or information that unlocks the next dungeon. Most of the time, this item is something that expands your arsenal of tools, but rarely is the item incorporated in the puzzle-solving in the same way as the Zelda series, which isn't necessarily a bad thing.

Puzzles vary a great deal, but most are slight variations of sliding block, stair-making, puzzle-platforming, memorization, with some interesting and thematic logical puzzles. It's refreshing that the game is genuinely challenging, but it sometimes veers dangerously into being more annoying than difficult. For instance, there is a significant number of platforming-puzzles that punish you greatly for failing a jump by not only repeating the entire puzzle but also going back to an earlier room in the dungeon. 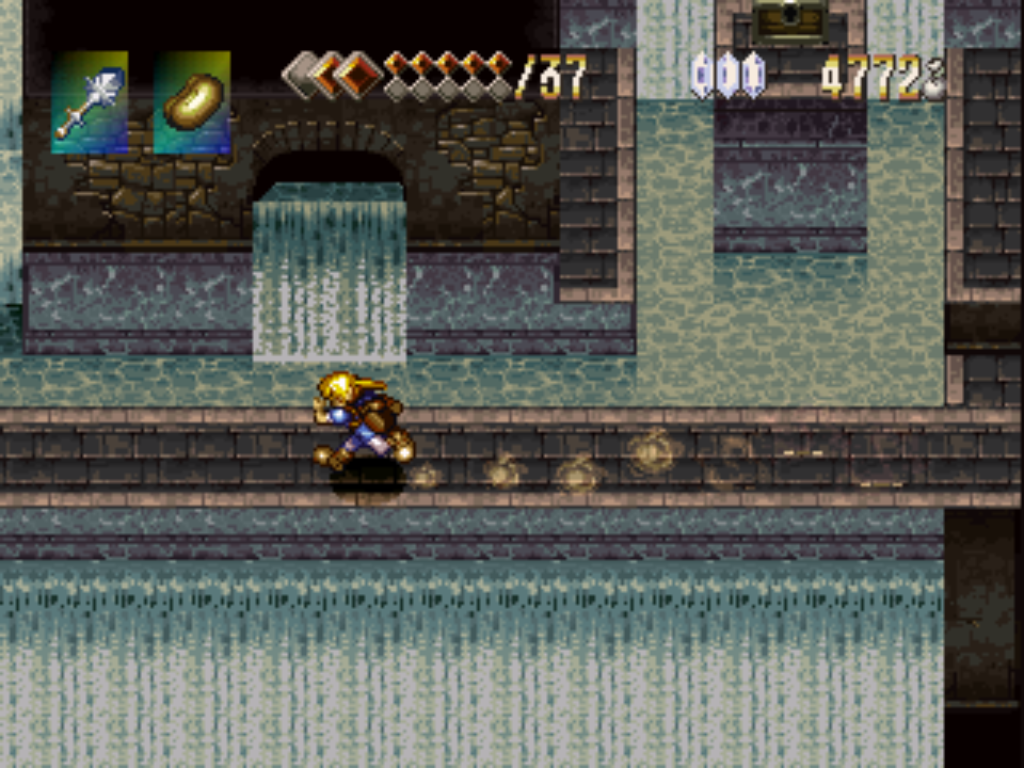 I must have run through this corridor at least seven times

The only reason that this isn't a deal-breaker is the fact that is just too many good puzzles countering the bad. Ironically, this then develops into a negative of its own.

Simply put, Alundra is not a short game. It has nearly twenty dungeons, and these aren't short dungeons at all. Honestly, the game would be a bit better if each dungeon was slightly shorter, leading to a tighter experience.

Still, the dungeons and puzzles within are overall of high quality despite the occasionally annoying platforming challenges. Of course, they are made better thanks to their thematic relevance in the story, especially the dream sequence dungeons which are a highlight of the game.

Other than puzzles, you will spend the majority of your time fighting the game's various enemies and bosses. Initially, with just a dagger in hand, the combat is a bit tedious. However, as you gain more powerful weapons and equipment, the combat does open up more.

Previous damage sponges become manageable, and you start having more ways to deal with bosses, including magic spells that are unfortunately exclusively useful against them (thanks to a limited magic pool).

The consistent acquisition of equipment and power-ups is consistent with the themes of the game, and you feel you are getting closer to being able to defeat Melzas with each completed dungeon. However, that power comes at a cost. 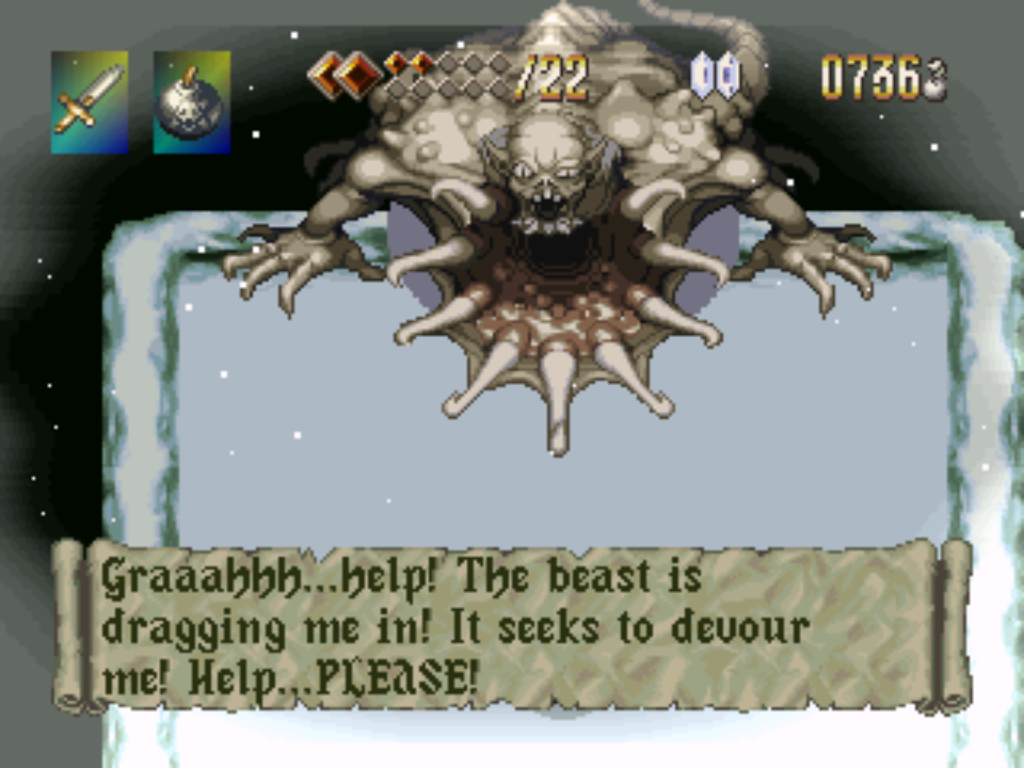 Can a hero save everyone?

Naturally, there is the actual time and adventuring cost in conquering the dungeons, in addition to the necessary exploration to find life vessels and gilded flacons (which you trade for useful items). Yet the more potent cost is the lives lost in the village of Inoa, with each life reminding Alundra and the player of the necessity of success.

This dramatically comes to head against the game's many bosses, which are mostly good despite some of the later one devolving into long fights with damage sponges. At that point, you should have the tools, equipment, and resolve to handily defeat any foe.

"Creation and invention are part of being human... and so is dreaming. If we deny ourselves the right to dream, we deny our own humanity!"

If not for its excellent graphics, none of Alundra's story or gameplay ideas would fully carry through. Thanks to its conservativeness in using 2D sprites, the game ended up aging gracefully. It looks like one of the best SNES games but with even more additional graphical effects that give it an extra oomph.

Supporting its smart use of graphical style is some quality sprite-work and character design. It's nothing that is truly inspiring, but it works very well overall and is great in motion. Especially when combined with the gritty character art.

One thing that may be criticized is the muted color palette, but I think that it fits the mood of the game which is more somber than your typical Action-Adventure game. 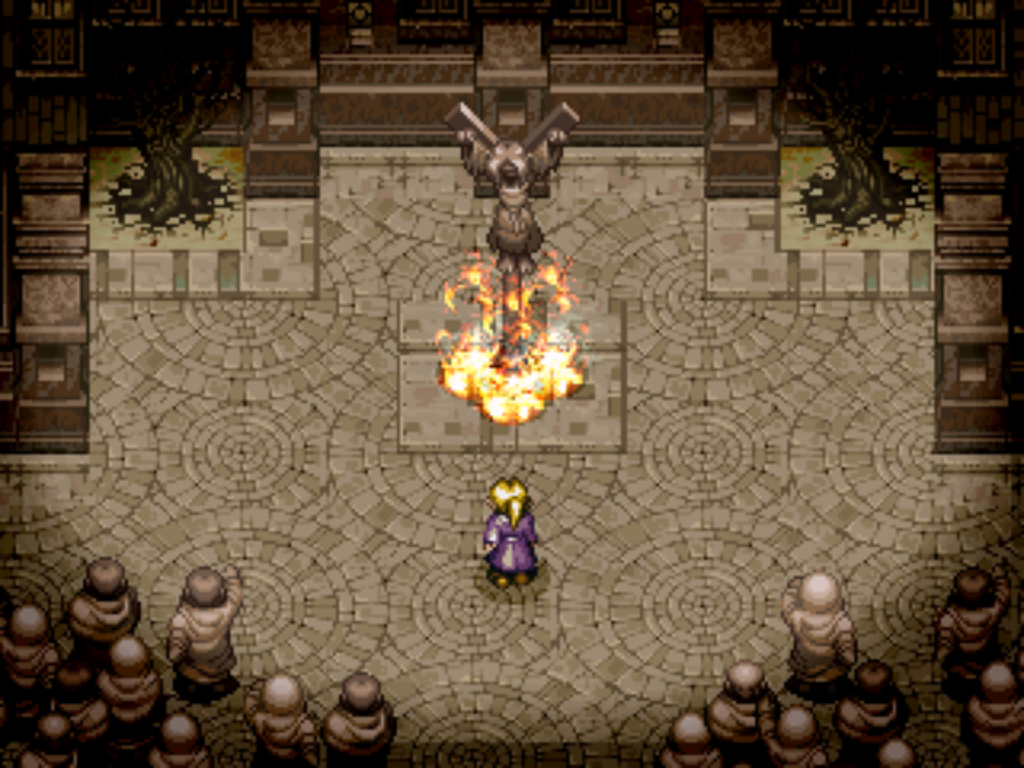 That sombreness is needed to tell such a sad story

That's made more obvious by the soundtrack, which is highly atmospheric and chilling in tune with less uplifting melodies. At first, I didn't care much for the soundtrack, but it quickly won me over as it effectively underlined the story and welded well with the graphics.

Even the "Village of Inoa" theme which I initially disliked became a favorite of mine as it ironically contradicted the tragic fate of the village in its jazzy tunes. However, it's not my favorite tune, with that being a contest between the dungeon themes: "The Lizardman's Lair" and "The Child's Dream".

On all counts, Alundra is a very good game that nearly reaches greatness. I think that with a little more polish in its dungeon design and platforming gameplay, this could have easily been one of the best PS1 games.

As it is, it is a very good Action-Adventure game with a uniquely somber story and surprising depth and complexity to its narrative, which manages to shine trough mostly good gameplay that is occasionally marred by excess in difficulty or length. 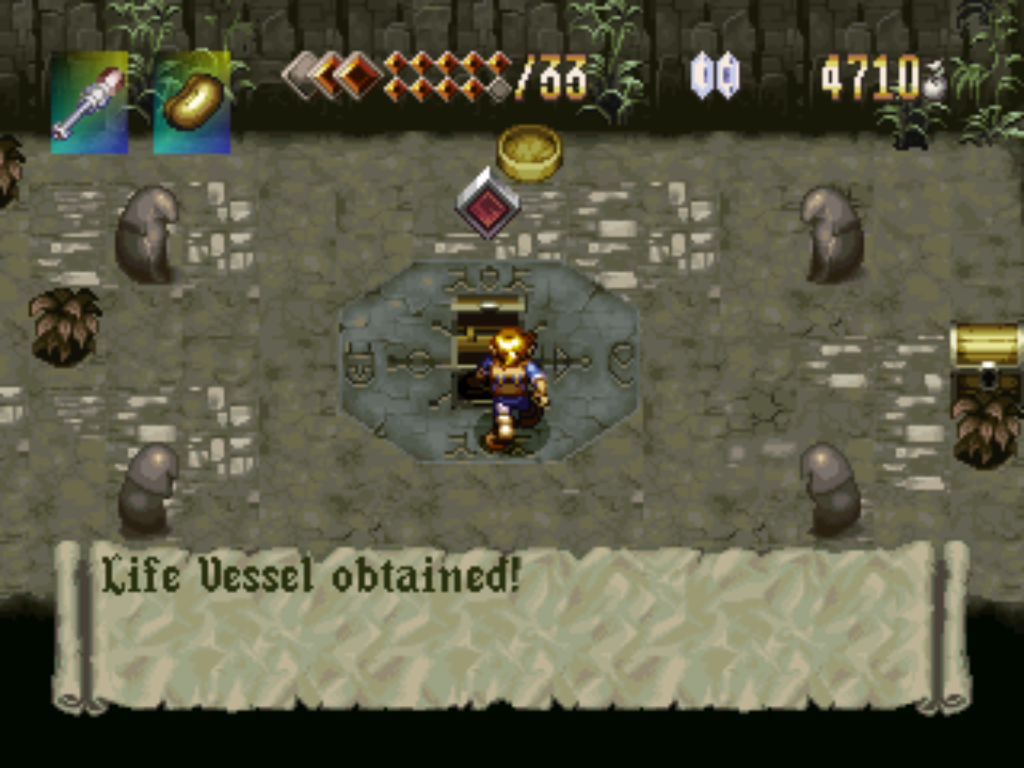 1-Explore the world and dungeons thoroughly to find life vessels and gilded falcons.
2-Gilded falcons can be traded for more life vessels and useful items.
3-The fortune teller can show you what you need to do next.
4-Spells should be conserved to be used against bosses.
5-Anything you can carry and throw without it breaking can be used as a step ladder.
6-Do not underestimate your jumping ability and the required platforming skill in some segments.
7-Jump into chimneys if you don's see smoke coming out of them.
8-It's a good idea to get the items from the Fire and Ice manors (in that order) as soon as you can.
9-Some thorny bushes that you burn hide passages. 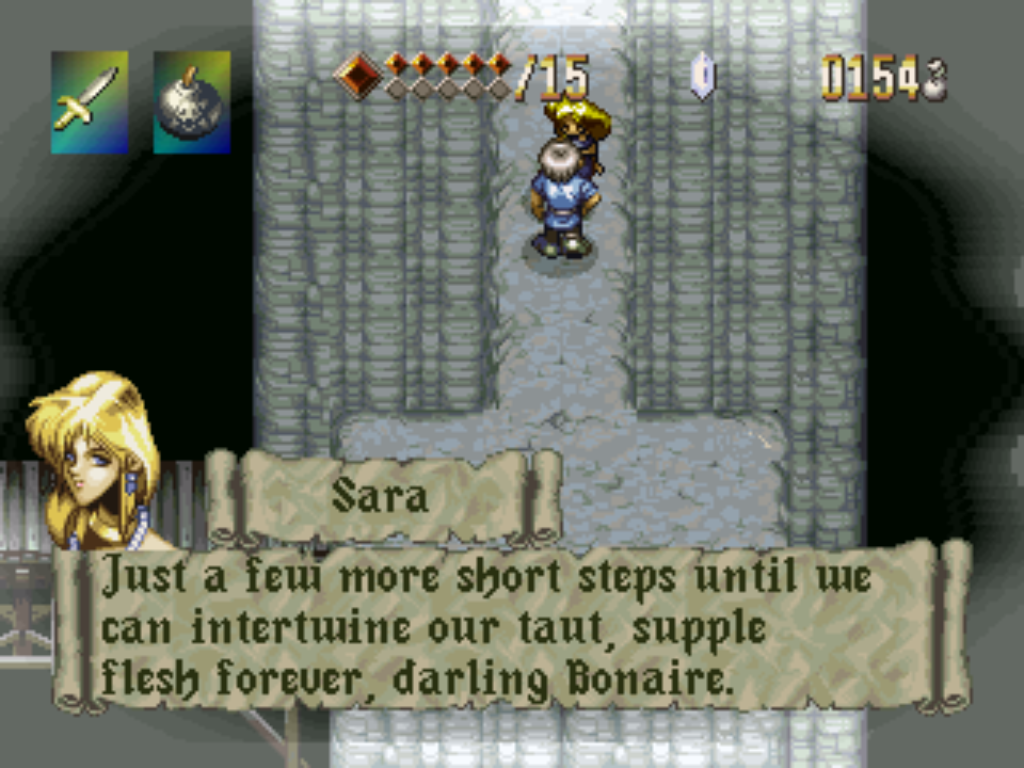 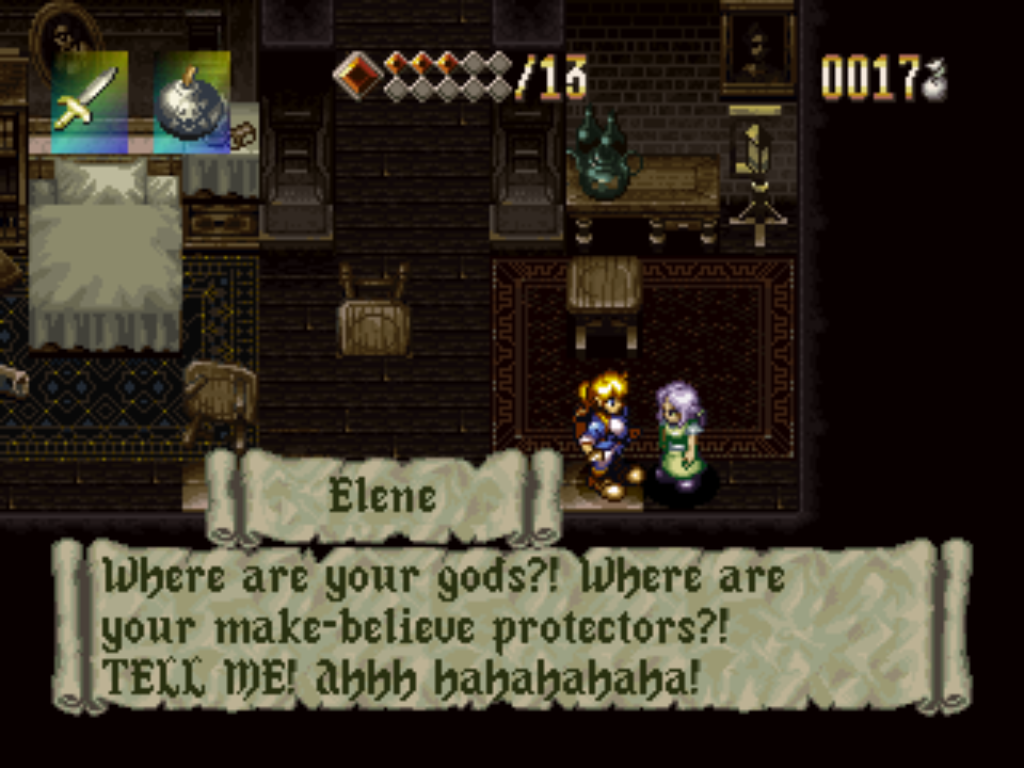 The story goes deep into the meaning and pitfalls of faith

Alundra easily becomes the first game in my PS1 reviews series that I wholeheartedly recommend anyone plays. It is seriously one of the best ALttP clones I played, and I don't mean that as an insult.

Next in my schedule is Alundra 2, which is supposed to be the Ocarina of Time that follows the first game. From what I have heard, the game doesn't succeed in that, but I trust this team's pedigree enough to know that it will at least be an interesting game to play.