While they are not a very well-known developer, Treasure managed to carve a well-regarded niche for themselves. They are known to make all kinds of solid action shooters from Shmups like Radiant Silvergun to Run 'n Guns like Gunstar Heroes.

As such, fans of the developers know what to expect here, and Silhouette Mirage mostly delivers in that front. It has a great shooter foundation and adds into it a unique color-coded shooting mechanic in addition to a funny story and charming characters.

Yet, several minor shortcomings add up to detract from the final game, holding it back from being on of Treasure's best, erm, treasures. 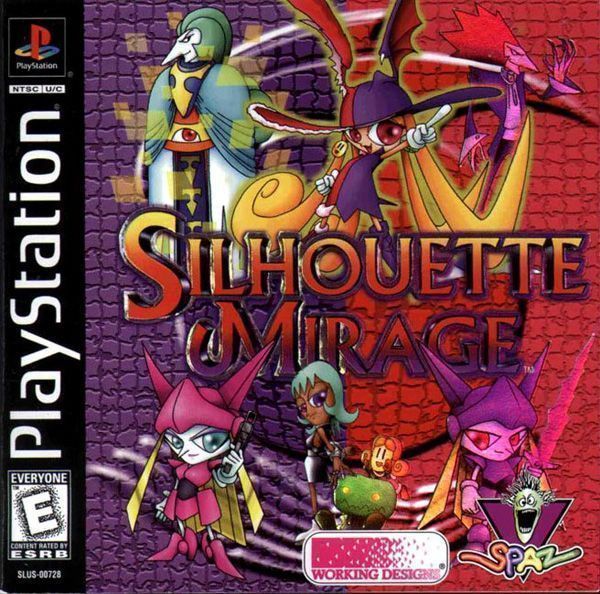 "I was created to be the messenger of Justice"

Past Treasure games did have the semblance of a story, but none had any extensive dialogue that fleshed it out or much of character interactions. That changed with Silhouette Mirage and Working Designs excellent localization, which make a cohesive story with honestly some good and funny dialogue. 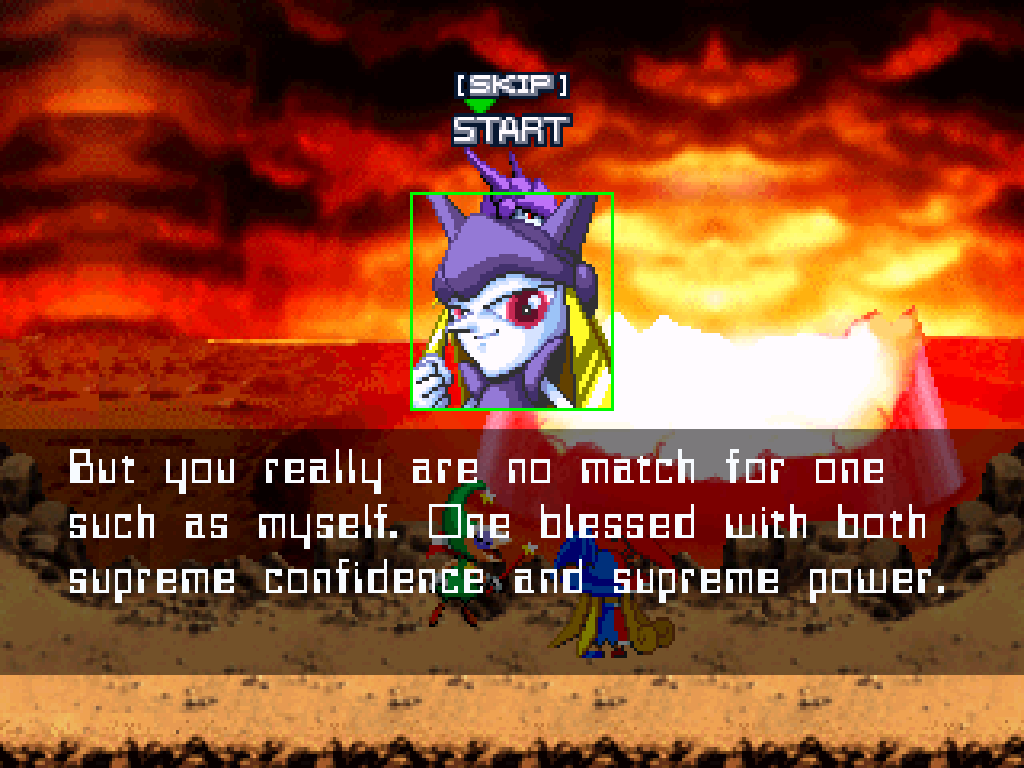 While the main story is nothing to write about, especially with its weird and confusing conclusion, the journey is some seriously funny and charming stuff. All the enemies Shyna encounters have some funny dialogue that fits very well with their visual design. Also, the story progress includes some over-the-top set-pieces that are straight out of 90's anime shows.

This level of charm and hilarity was never approached in previous Treasure games and is actually one of the best attributes of Silhouette Mirage, and this has a lot to do with Working Design's excellent localization as well.

"Ha? It looks like you really screwed up baby! You 'ave stumbled into my messed-up lit'l world, an' we're on the attack!!"

Even if it has a good story, a Treasure game still lives and dies by its gameplay, which is expectedly good here, but with some serious caveats.

Silhouette Mirage is a regular2D Run 'n Gun game on the surface with obvious inspirations from Gunstar Heroes. Shyna has access to several weapons (most which are useless, but more on that later) but also has several other options as well. She can slide beneath enemies, dash around a lot, triple jump, grab enemies, and even throw them around. Mechanically, the game can play almost exactly like Gunstar Heroes but in a different setting.

However, what sets this game apart may is its color-coded attacks mechanic that is an obvious precursor to the legendary Ikaruga. Enemies in the game come in two attributes and can only be damaged by the opposite attribute. For instance, "Silhouette" enemies can only be damaged by "Mirage" attacks, and the same goes for bosses (some which can also change their attributes). 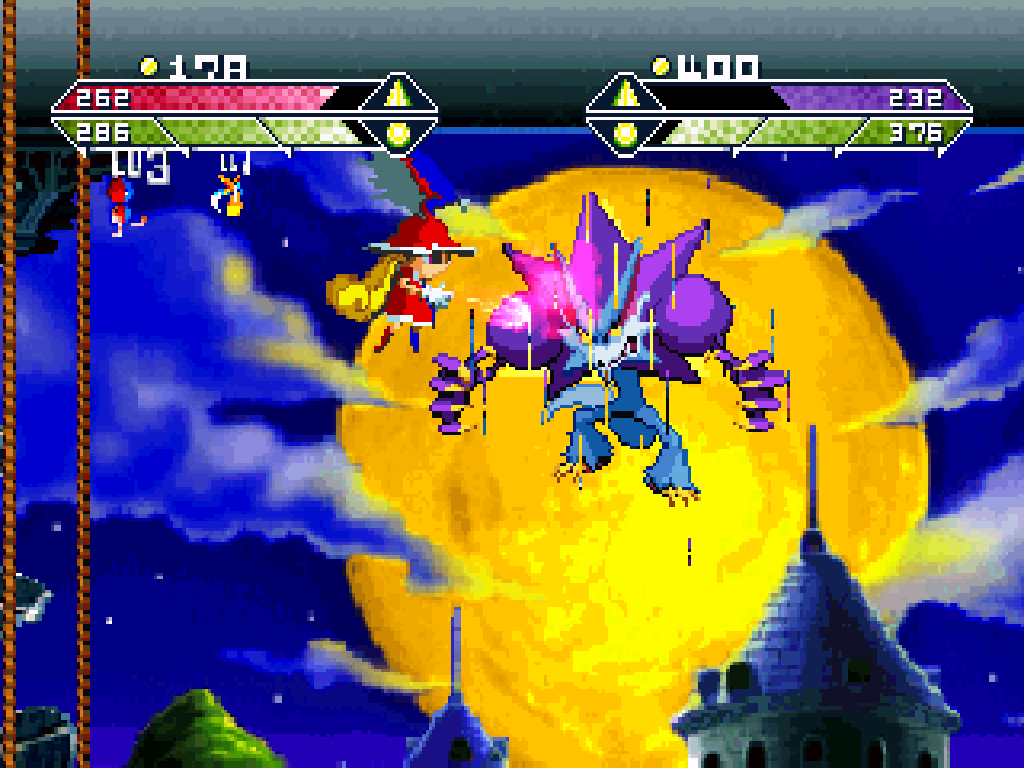 Even bosses have attributes

Unlike the latter Ikaruga, the attribute switching here isn't done through a simple button press. Instead, Shyna's attribute is governed by what direction she is facing. You see, having both attributes in her body means that each attribute occupies half of that body vertically. So, if she one direction, only one side is shown and she starts shooting with that attribute.

Obviously, this opens up a unique tactical dimension to battles where you try and push enemies (or throw them) towards the end of the screen facing the correct attribute, which is fun in the beginning but grows annoying later on. Thankfully, shooting enemies with the same attribute is not useless as it both reduces their attack power while recovering some of your spirit meter.

It would have been better to change attributes with a button press (which is available but require a lot of spirit power to use).

With its solid action-shooter gameplay in place along with its unique hook, Silhouette Mirage is all about providing varied scenarios to test the player's mastery of those mechanics. True to Treasure's usual style, this leads to a larger Boss to Pawn ratio than any other developer.

These bosses are all great fights.

In fact, they are so great that Treasure believes you will want to replay the game four times to fight all of them (to see all endings). Unfortantnetly, this leads to Treasure making some questionable design decisions that downgrade your first playthrough so that it can justify subsequent ones. 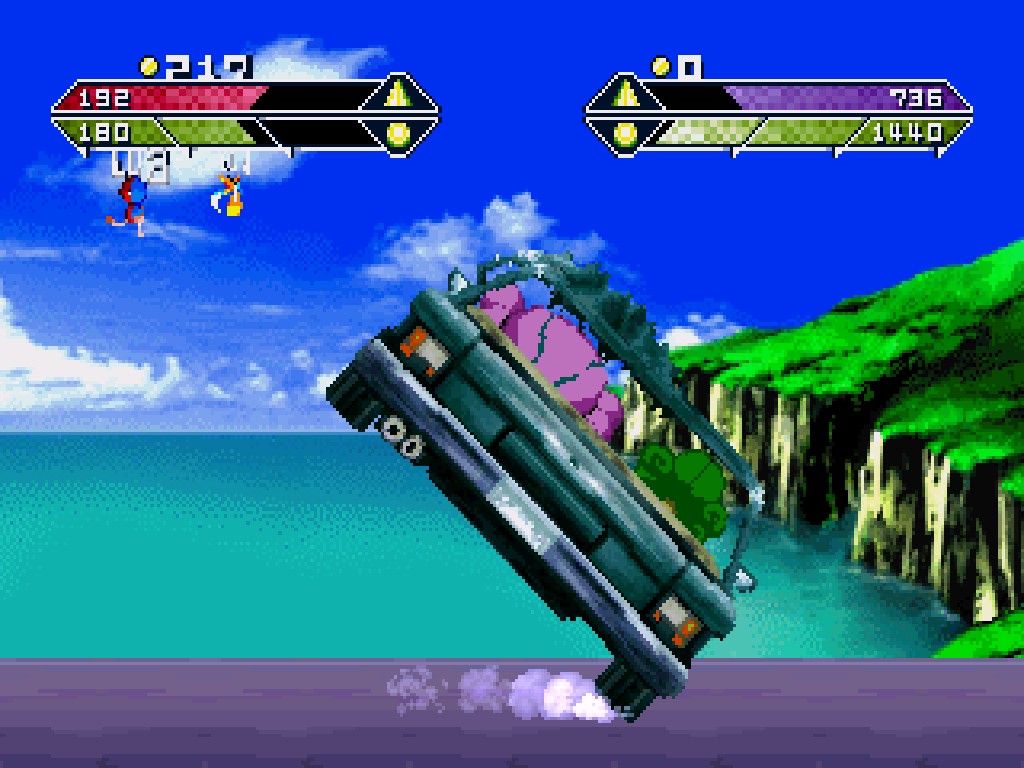 You can only drift so much before you get bored

For instance, buying different weapons is very expensive, which means that you will most probably only have two or three options for the entire playthrough. This is due to money being locked down behind an annoying "cash bash" mechanic. Still, if you persist and get enough money to buy different weapons you will only realize that all but one of them is significantly inferior to your basic shooter.

Honestly, it can be said that the game is worth playing through twice. However, there is really little variety between each playthrough as the game only diverges in the final level. By the third time, it justs gets too slow and boring for a Treasure game.

"Two attributes... just like me... but I'm cute and kind and strong and smart and sweet and humble"

I think the only reason that the game's writing landed as well as it did is because of the amazing personality of its graphics. Drawn expertly in 2D sprites, the game graphics showcases Treasure's usual cartoony style that belies its deep and difficult gameplay.

Characters are uniquely drawn in a style similar to early 90's kid's anime, and that translates to some of the ridiculous animation (one guy slashes an ENTIRE BUILDING IN HALF). Of course, the graphic aged very well and still looks great today. 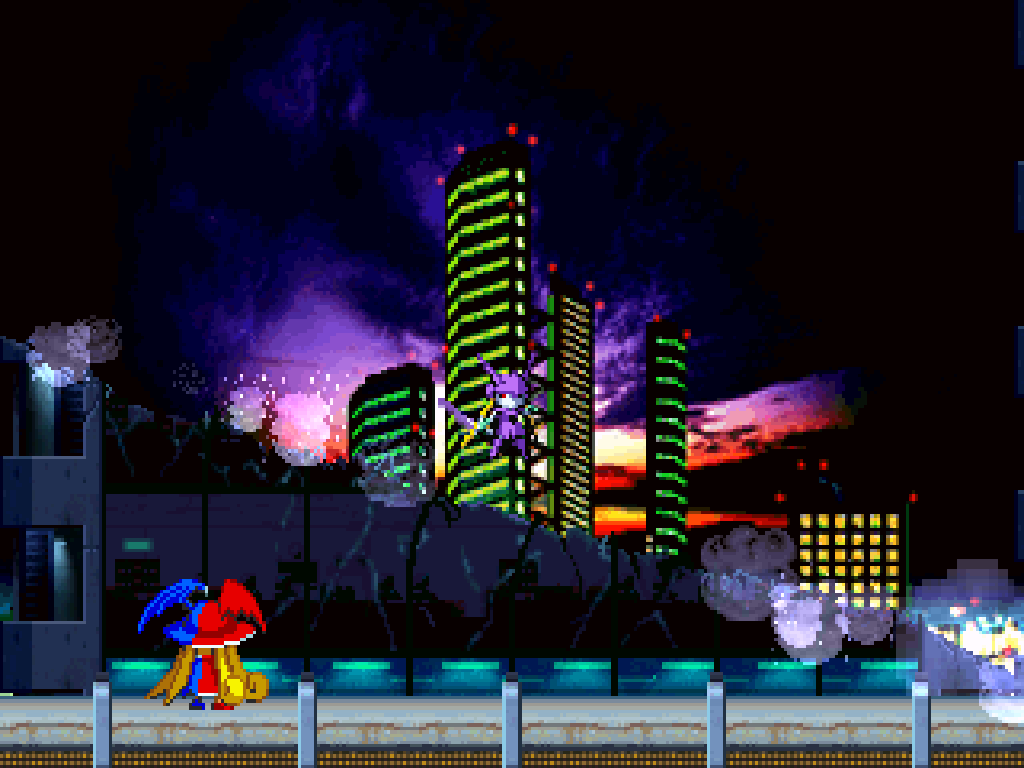 That's especially the case when you consider how well the game behaves even when there is a lot of things going on screen, which you need to pay attention to decide which attribute to use (and which side to face).

Thankfully, the sound effects help make things clear without being annoying at all, and as such, they don't mask the game's quirky and funky soundtrack Truth be told, this is not among Treasure's best OSTs but it actually fits the game very well.

Only later, when the stakes are much higher, the soundtrack goes for a generic evil-sounding style that doesn't fit with the upbeat nature of the game.

Would Ikaruga exist without this game? I think this is an important question to consider when discussing the legacy of Silhouette Mirage. It is true that its signature mechanic may have inadvertently lead to an unwelcome slowdown of its gameplay, but that mechanic was simply a brilliant idea.

You may wonder if the reception would have been different if attribute switching was done with a single button press. I think it would have improved the game a bit, but then we would focus on some other minor issues.

For whatever reasons, Silhouette Mirage is a good Treasure game with some a heap of minor things holding it back from being one of the studio's best games. 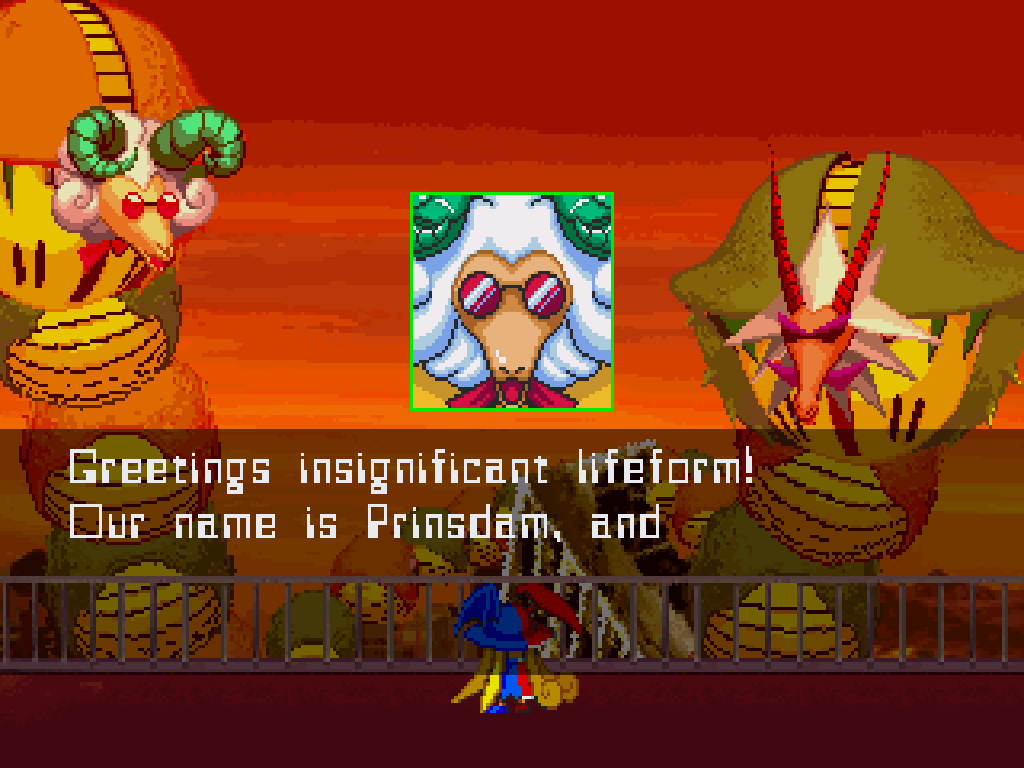 1-Don's depend on switching attributes with spirit power, it's not a valid strategy.
2-Don't neglect grab attacks as they can set up small enemies for the attribute that damages them.
3-Also, when grabbing enemies, you can bash them to get cash (most viable way of getting cash).
4-Slope are not stable ground, you might slip into enemy fire if you are not careful.
5-You basic weapon (Sarusa) is the most useful so focus on upgrading it. 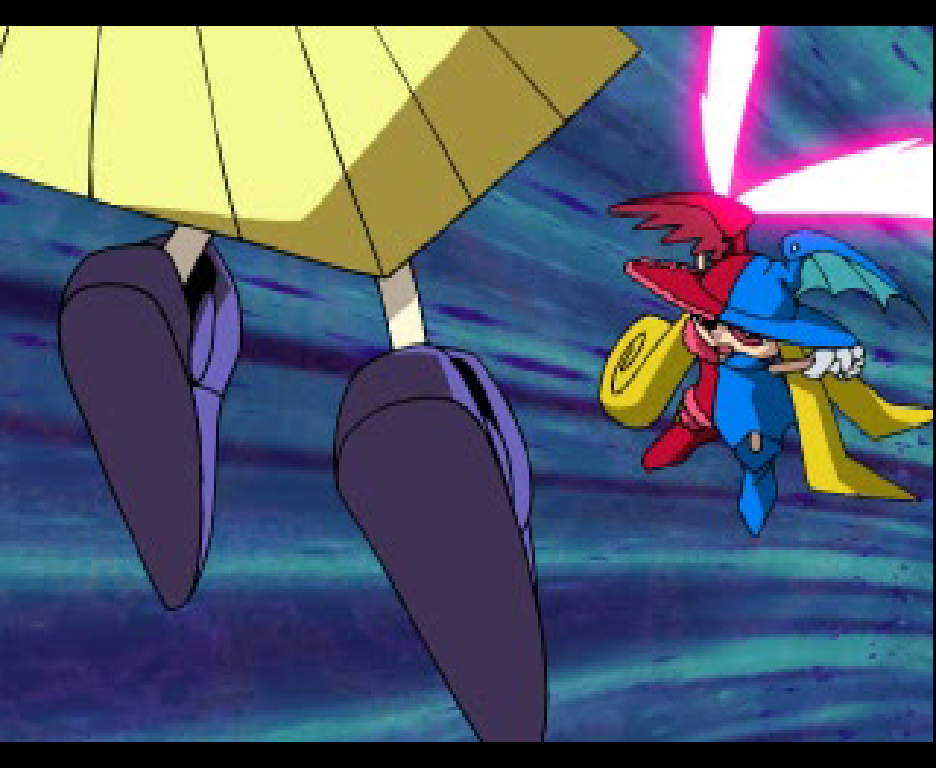 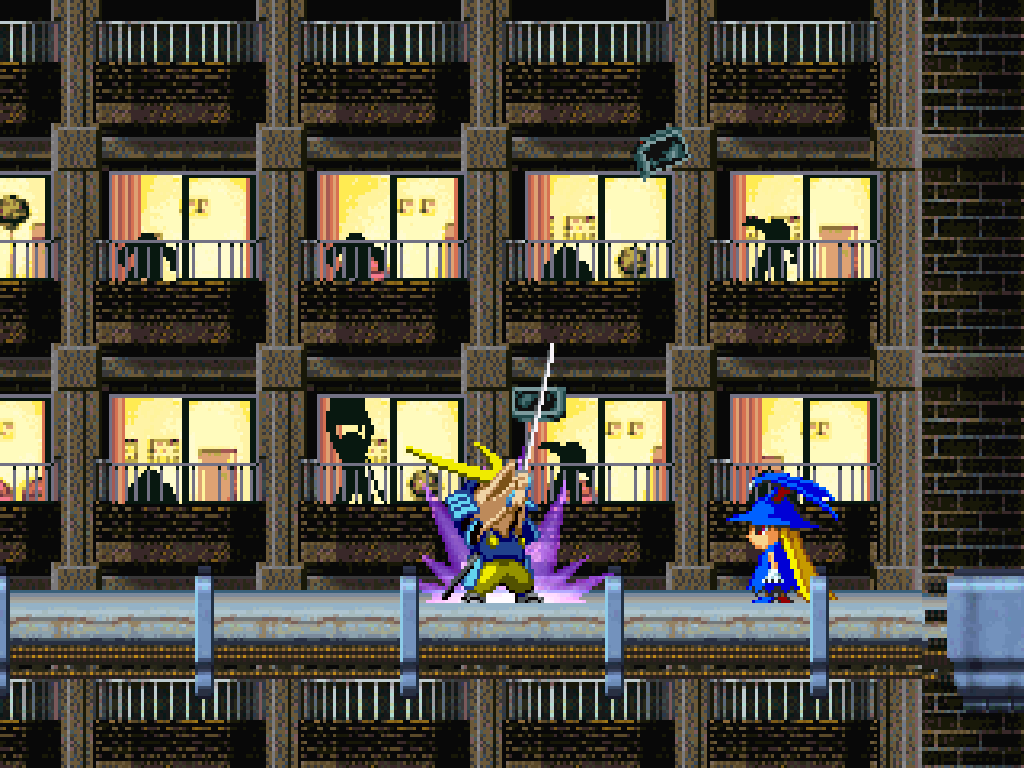 I haven't played all Treasure games, but I think I rank this one above Alien Soldier on the Genesis and under four other games which I gave 8 or higher. I think this actually will be the last Treasure game I play for a while, at least until I finish my PS1 reviews.

Next in my review list is a report of the top 90-81 games on the Retro Sanctuary list. After that, I am going to start reviewing games from the "Additional List", starting with Tail Concerto at #A75.