Of all the video game mascots born in the 90s, Gex has always been the one that most embodied the spirit of the decade. With his sarcastic humor and misuse of parody as a style, he was as obnoxious a 90s star as you can get.

Other than the character himself, the games he featured in were not unique, even if they were not actually bad. The first 2D platformer was a competent game that played well on the Saturn at a time where 3D platformers were ugly as sin.

Enter the Gecko was Gex's first foray into 3D platforming, and it works well. However, I am not sure "well" cuts it when there are so many better platformers than it. 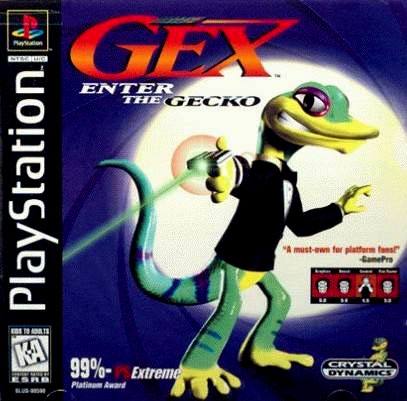 "Looks like I am heading back to the Media Dimension. It's gonna be deja-ouch all over again"

Enter the Gecko (Gex 2) starts with a short CGI movie informing the player that Gex had to go back to the "Media Dimension" to defeat Rez, his old foe, all over again. Instead of crafting its own world and identity, Gex relies on parodying the TV focused popular culture of the day, and the Media Dimension serves as the hub area before he goes into each TV parody.

While there are multiple levels, they each are split between one of six themes: scary movies, cartoons, prehistoric movies, Kung-Fu movies, space, and something that resembles Tron. In theory, these locations should be a form of parody or humor, but I simply don't see enough wit in the design to illicit any such humor. What these locations do provide is varied, if not particularly impressive, visual motifs.

So it is left to the wise-cracking gecko to carry the game's comedic chops, and the best you can say is that he tries very hard, and that the game is proud of that effort. 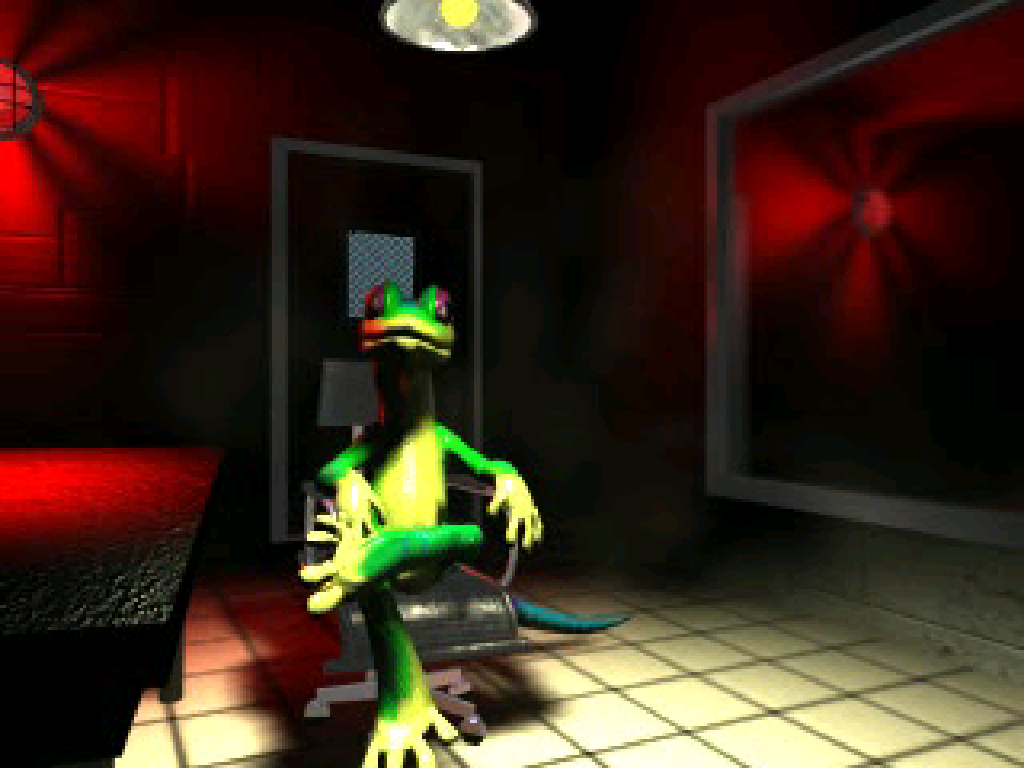 A James Bond parody, so original

Touting over 700 unique catch-phrases as a selling point, the team apparently green-lit any phrase that they could, never stopping to ask if they should. While the comedic value of each utterance by Gex is debatable, the obnoxiousness of it is overbearing.

Still, that's actually the point and design of the character, and much of what he says is designed to elicit an eye-roll. Thankfully, the PS1 version has that 700 samples to choose from, so it rarely gets extremely repetitive.

Playing it on the N64 with its reduced audio capacity (which allowed for only 100 voice sample) must have been extremely grating.

"Aaah, to see the world as Keith Richards does"

Jumping into a 3rd dimension in 1998 meant that Gex 2 already had a bunch of reference games to look at. Super Mario 64 and Crash Bandicoot both preceded it by nearly two years, and other 3D platformers were released as well. In an already crowded genre, there is little that Gex 2 to separate it from the crowd.

Gex's main tools are his tail, tongue, and ability to climb walls. The tail is just another twirling attack that is somehow much less useful than Crash's twirl, and the tongue is very much under-utilized. Needing a separate button to activate, you imagine it would be very useful. However, you only use the gun to swallow health or power-up flies in a frankly redundant action. To be fair, the tongue itself automatically activates as a hanging mechanic to compensate for the game's wonky jumping.

Wall climbing is where the game's most unique mechanic, and it isn't utilized enough to be ground-breaking, nor is it abused to the point of distraction. 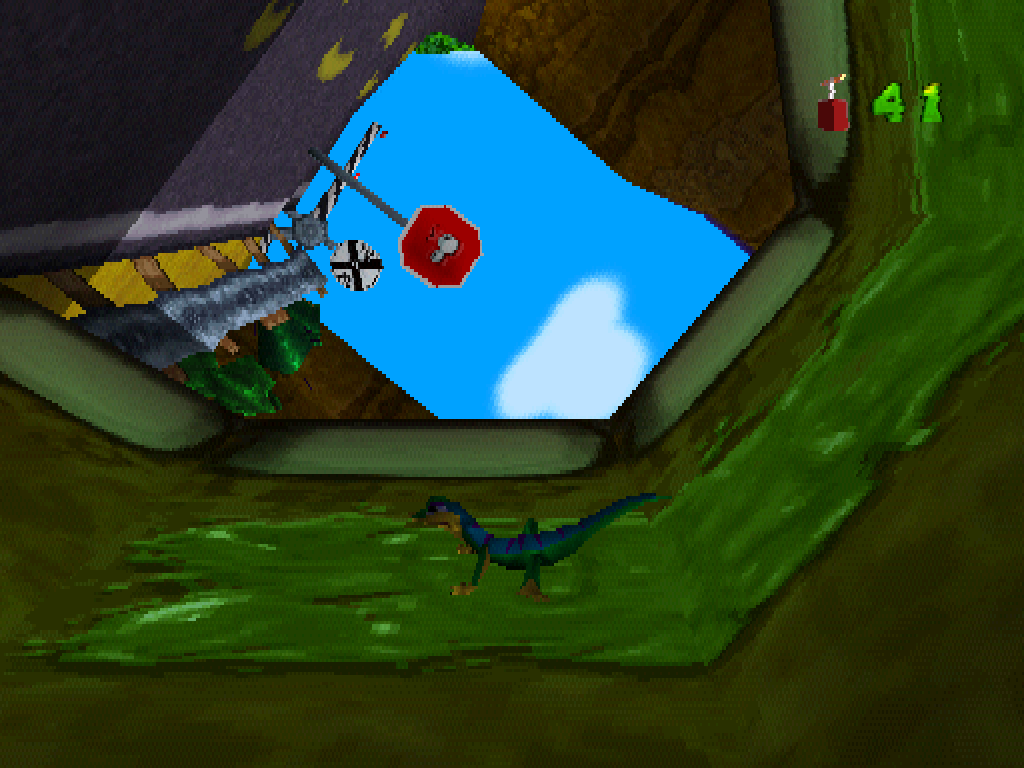 One thing the game does well ,but not well-enough to avoid all issues, is with its camera system. With three camera control options, the game seemingly avoids all the issues related to 3D platforming auto-cameras. However, the game still wrests control from you even in manual camera mode, and the game is at its worst when you wrestle with the cameral for control.

Damn it, just let me control the camera myself in manual mode.

"I will beat this level, but in an hour, I will be hungry for another"

The goal in each level is to get to the Red Remote at the end of each area. Most levels have more than one remote, each being in a different part of the level, while some ask you to find four or five collectibles before the Red Remote shows itself.

As the game progresses, the levels become harder and more interesting. Ironically, once the game itself becomes more interesting, you start getting bored of the reused assets and one-liners (even if the level itself changes).

Also, each level has one-hidden remote, and another that you get by collecting 120 "coins" in the level. These hidden remotes unlock some bonus stages, but that went beyond my engagement with the game.

Initially, I thought that all levels will require revisiting the same areas to get all Red Remotes. However, most levels actually have entirely separate areas dedicated to each one.

To progress and reveal more levels, you need to both find enough Red Remotes to unlock later areas as well as fight some really basic bosses. Except, that is, one excellent boss which you fight like in a monster movie. 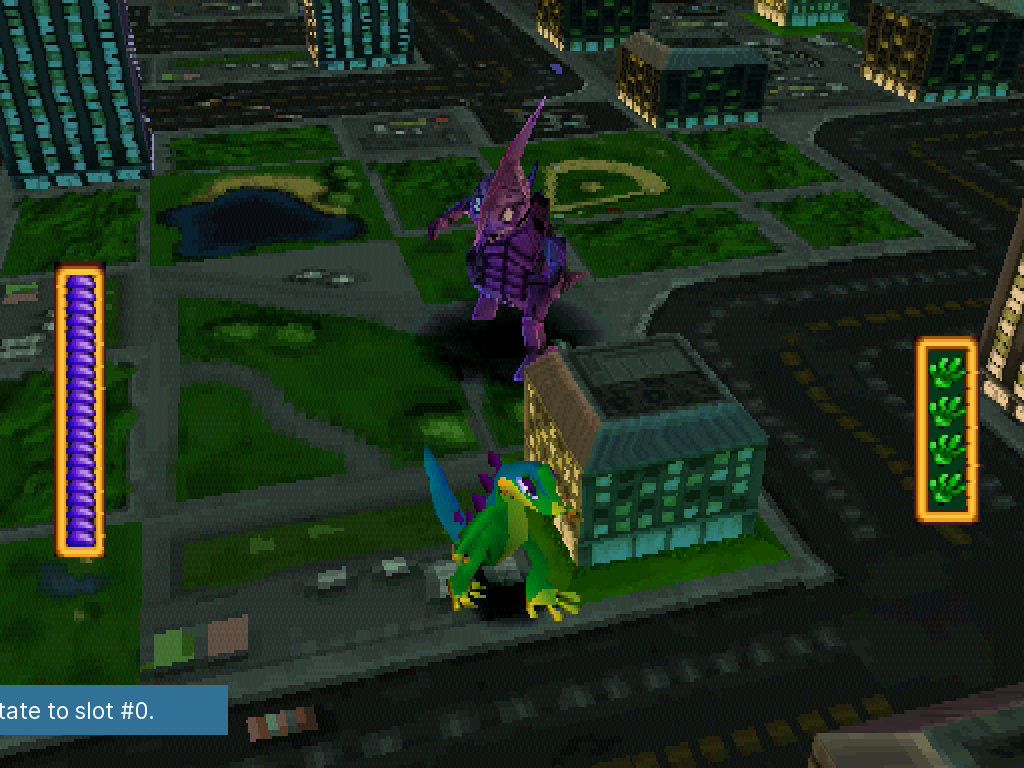 Now this is a boss fight

"It's all in the tongue baby!"

By the time they made Gex 2 Crystal Dynamic were already highly competent with 3D graphics through their experience with the Tomb Raider series, and it shows here. Gex himself looks great and animate really well, and the world's graphics are very good from a technical point of view.

Overall, of the six themes, four work really well while two have some issues. The Cartoon theme is ugly for most of the level, and the space theme is barren beyond reason (except in its great background art). 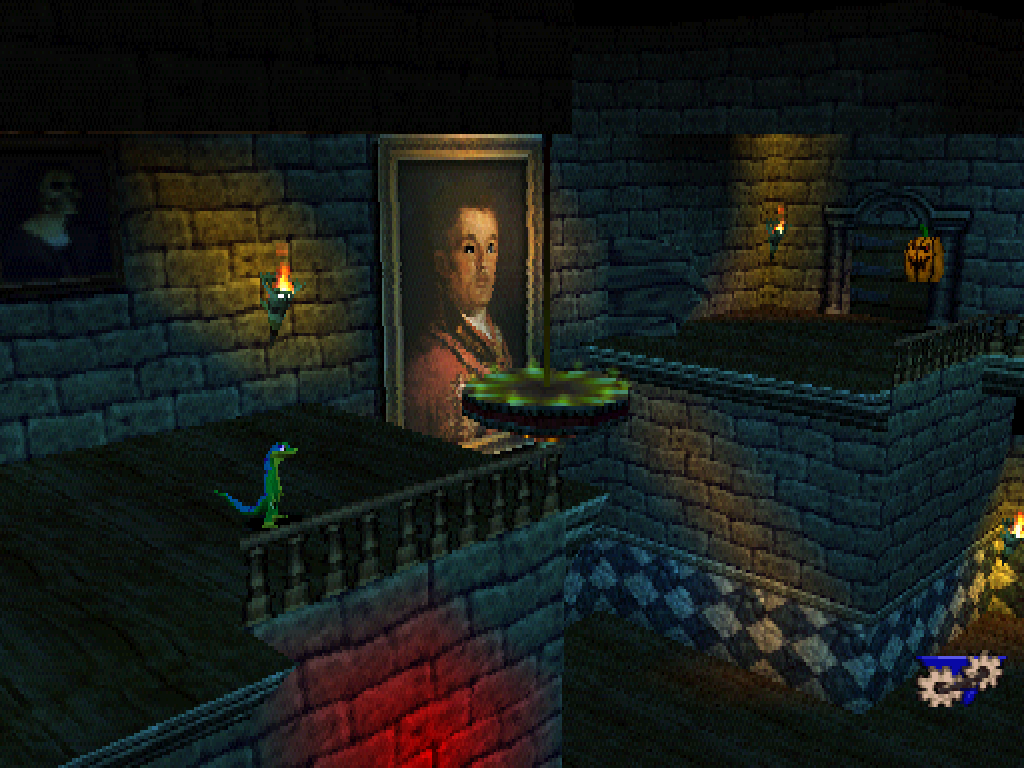 Is that painting looking at me?

It's in its sound department where the game truly falters. Beyond the obnoxiousness of Gex's one-liners, the voice acting is good. However, when you combine it with repetitive and annoying sound effects, the result is something else. The beeping sound that rejects your assertion of camera control is the icing in the terrible cake.

Unfortunately, the soundtrack does nothing to take command of the situation and instead is a mishmash of unattractive tunes and noises that is outside the norm in 3D platformers. This is surprising when you consider the soundtrack for the first Gex game was actually decent.

There is little, other than the terrible sound effects and weak soundtrack, that is seriously wrong about Gex 2. It looks good, and plays well most of the time, and has a bunch of varied levels with the rare instances of interesting mechanics. 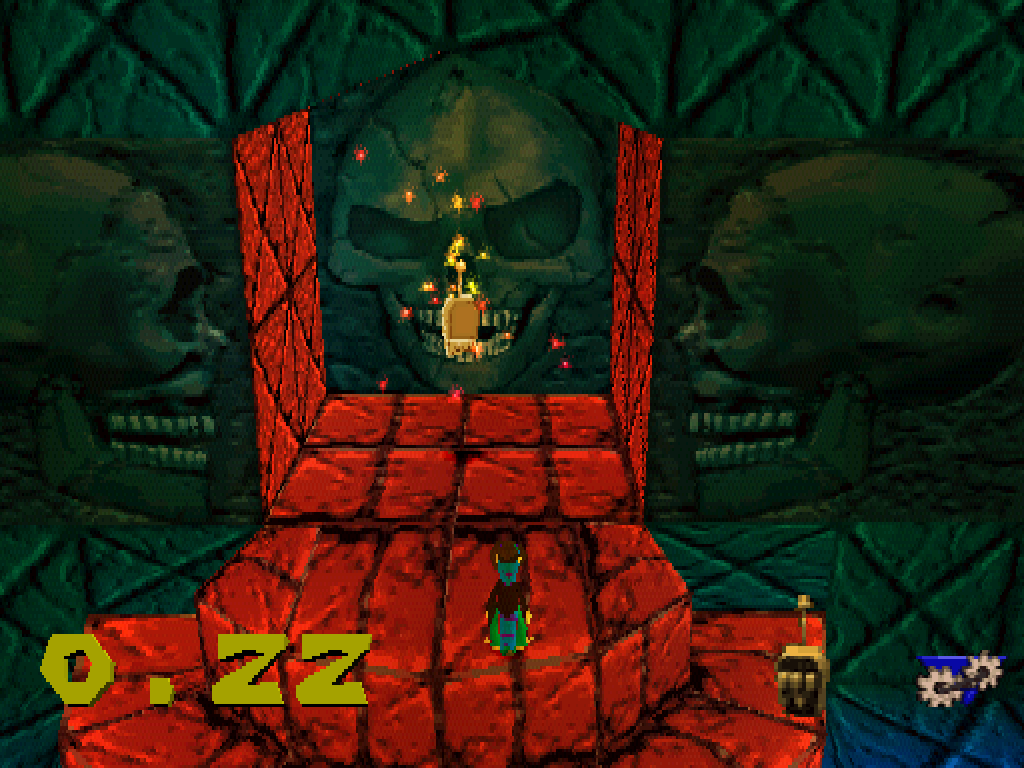 1-Collect enough (120) tokens in each level to find a bonus Remote.
2-Use the manual camera control mode.
3- Each time you go into a level, you can only get one Red Remote. 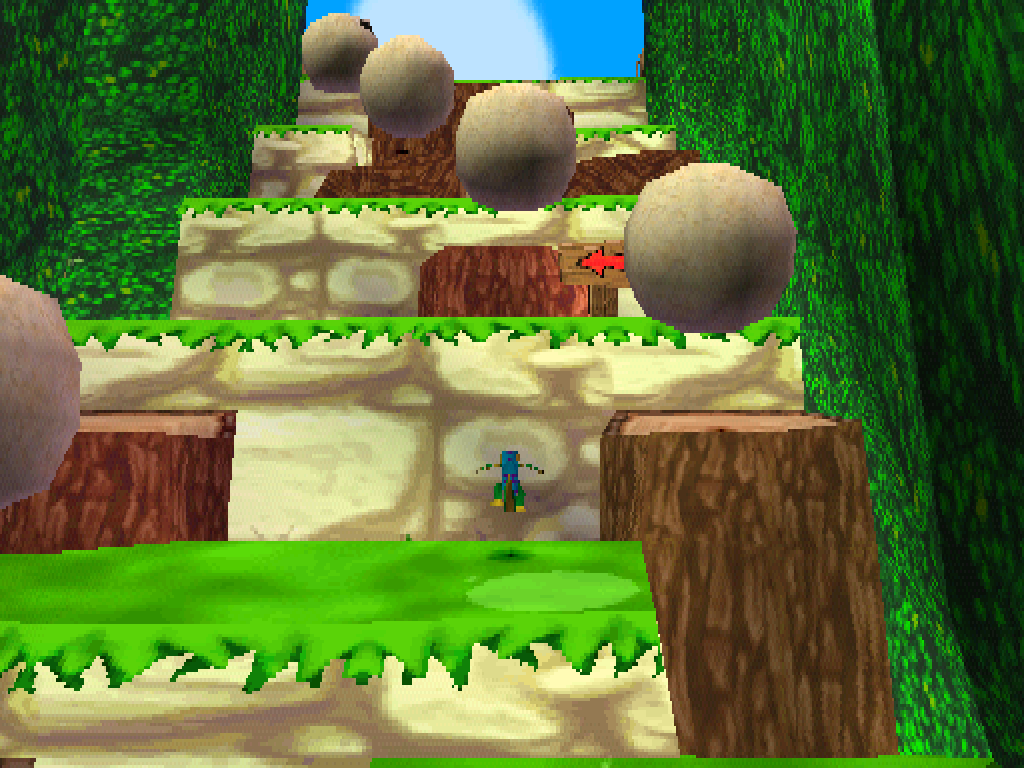 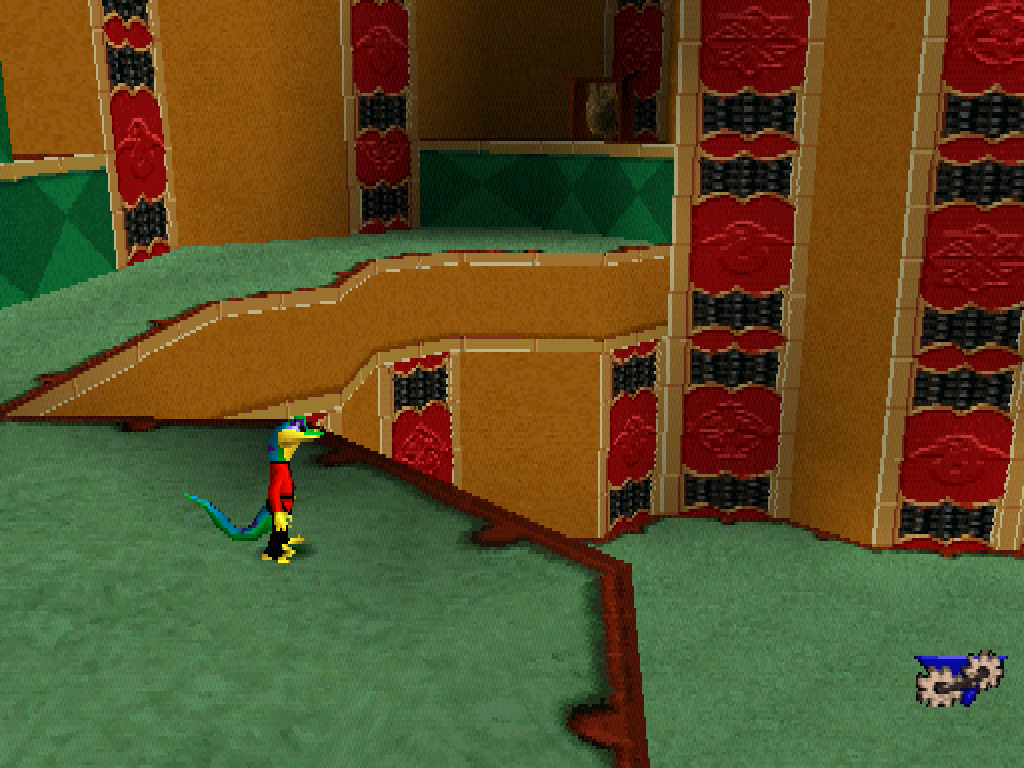 Last time I was here, I was dressed as a women

I know that I played one Gex game as a kid, but I wasn't sure which, but now I know that it isn't Enter the Gecko, which would have been something I would have enjoyed then, but not so much now.

The next game in my review list is Gex 3: Undercover Gecko, which is the game that I probably played (but not completed) as a kid. I will play the game, and if I see any improvements on Gex 2, I will continue playing and review it as a supplement to the list. Otherwise, I am moving on to Vanark, which is at #97 in the Retro Sanctuary list.