Disruptor is a competent Doom-like FPS with little to deviate it from the scores of such games. It is worth remembering only as a footnote in the development history of Insomniac Games, which started with this unremarkable game and then went on to become a powerhouse developer. 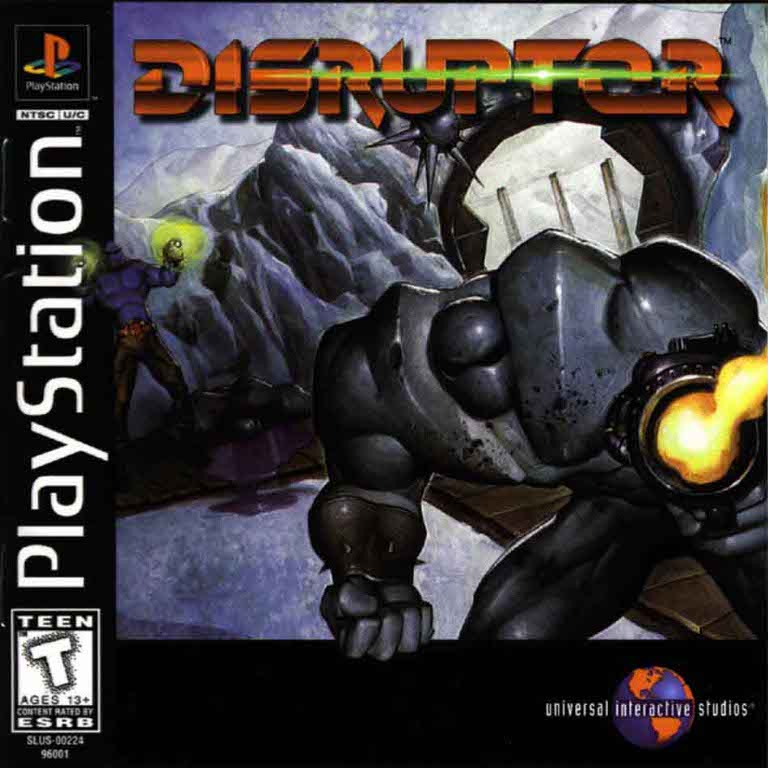 Games in the 5th generation started to have more of a narrative focus, and games like Disruptor could not avoid having a story. This time, the story is revealed through poorly acted FMVs before any mission. To be fair, maybe it is not fair to comment on the acting ability of the cast since the stilted dialogue with its insanely high catch-phrase to exposition ratio wouldn't be flattering to any actor.

The basis of the genric story is that you are one of a special corps of soldiers who can control Psionic abilities "which can be surgically embedded in 10 minutes". As such a soldier, you go into several generic missions in a generic world using generic weapons and abilities.

Storytelling shouldn't be focused only on a threadbare narrative but should be part of every facet in the game world's design, in order to have a visual narrative that is oftentimes more important in videogames.

As a Doom-style FPS, the gameplay is focused more on movement than aiming with vertical aiming being locked, so there is no need for camera control. Instead, you will need to strafe around enemies, escaping their shots as if in a Bullet Hell game.

The speed of movement and the firepower options you have is very good. It is a fluid system, with many different weapons useful for different enemies and circumstances. 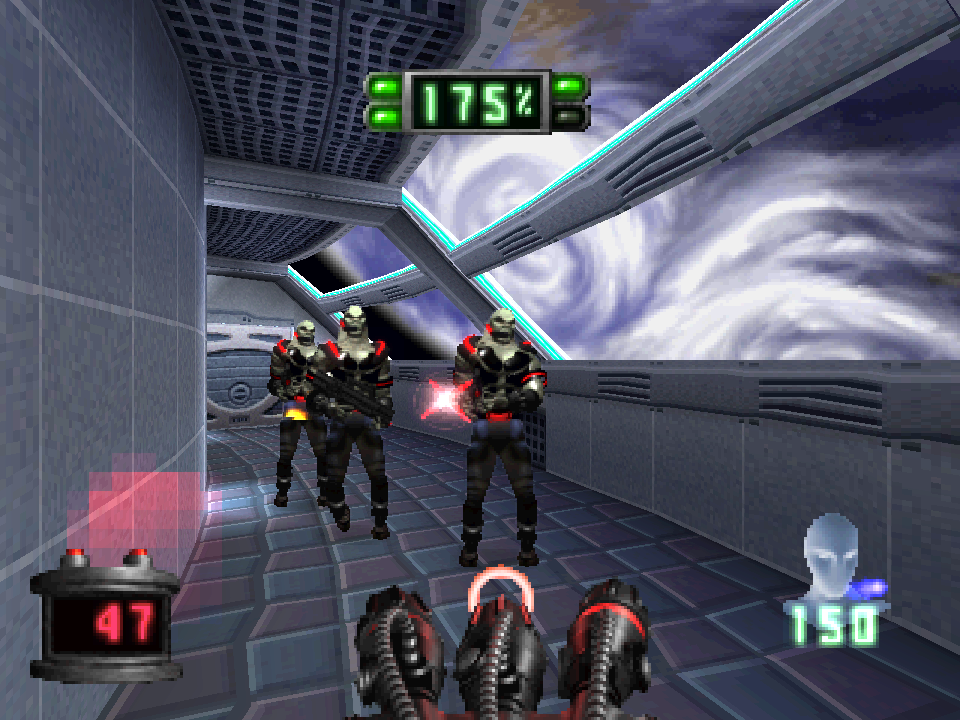 Why need three barrels though?

The best thing about the gameplay is the Psionic abilities you slowly unlock as you progress the game. While none are big game changers, acting morel like secondary weapons than an all-powerful tool, they do add a different layer to the combat and level progression.

While ammo and health are uncovered by exploring the levels, there are no pick-ups for Psionic abilities. Instead, you must use a "drain" Psionic attack on an enemy before dispatching them and causing them to drop more energy. This adds another resource management element to the gameplay that keeps it from getting comfortably boring.

"You call healing from a psionic implant a vacation"

Of course, you are still bound to be bored by the game's lackluster levels and lackluster mission design. While each mission nominally has a different objective, all are linear affairs with the same gameplay loop with one or two exceptions.

For instance, one level attempts to force a full-utilization of Psionic powers only to cave in at the start and offer weapon drops. Of course, that's the correct decision to make since Psionic powers are not balanced to be your primary offensive force.

Overall, I was very bored with the game by the end, which is mercifully not too long. I think that the length is actually decent considering the standards at the time.

"You will be facing organic enemies this time. So hunt for the Phase rifle and cook them until they are well-done"

Graphically, the game was originally designed with the 3DO in mind but soon migrated to the PS1 when that console proved to be a dud. I don't know how it was supposed to look on the 3DO, but it looks decently find on the PS1.

It's not an ugly game, but it is soo unremarkable to look at, that you may actually wish for it to have any unique ugliness to it. The graphics are well-done, and the effect sprites are well-drawn, but there is little visual consistency in the world, so much that every level looks like it came fro ma different Doom clone. 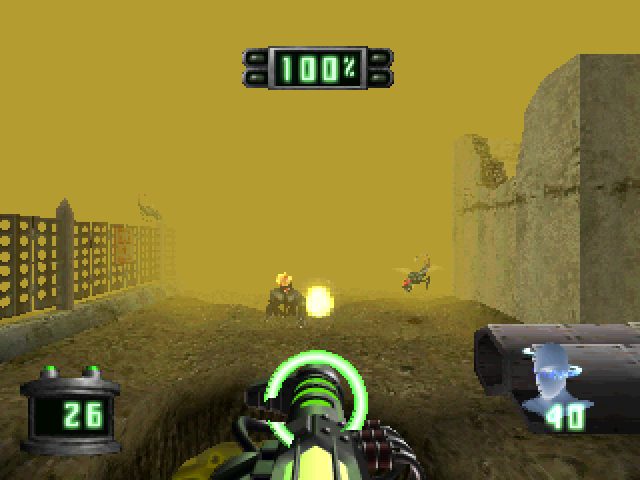 This is fully encapsulated by the boring FMV scenes, which could conceivably be the work of an amateur middle-school film fan.

Ironically, the music is where the game excels at, and due to an excellent soundtrack. While the soundtrack itself is good, the way the music changes throughout the level, depending on the gameplay context, is actually foreshadowing future music design in FPS games.

As an unremarkable game, made by a studio that would become an excellent studio Disruptor proves that great things can indeed start from humble beginnings.

Also, to be fair, a competent Doom-like game in 1996 was a rarity on the PS1, and maybe that's all the game need to be highly regarded at the time, while it is merely a historical footnote today. 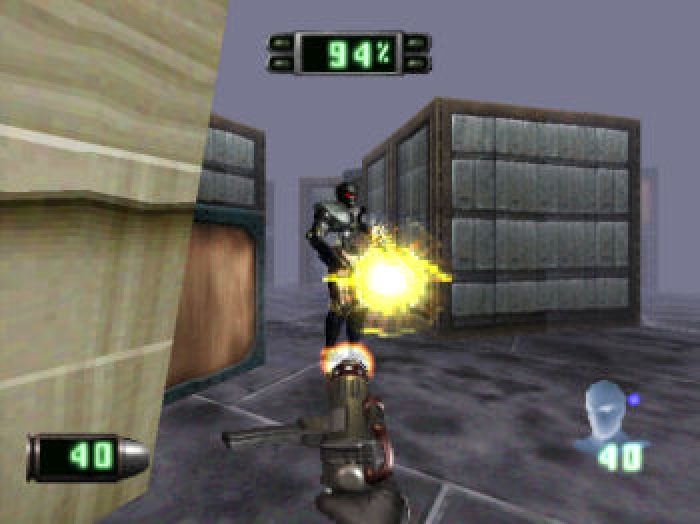 1-To make sharp turns, strafe in the opposite direction of the turn while making a turn.
2-Mix weapons and Psionic abilities for maximum efficiency.
3-The drain Psionic ability can help you recover some Psionic energy. 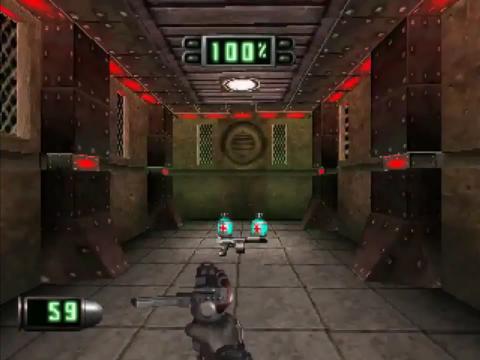 Man, I (the actual person and not the in-game avatar) need some health pick-ups

We begin the PS1 reviews series with a game made by Insomniac, the newest studio acquired by Sony and a studio that has shown consistent quality over the ages. If anything, Disruptor
proved they could make a competent videogame, even if there is nothing on Earth that should compel anyone to play it.

Next in the list is the first 3D game for the quintessential 90's mascot character, the ever-obnoxious Gex. The game being Gex: Enter the Gecko which sits are #98 in the Retro Sanctuary list.