I haven’t played many visual novels. Having only played a few to the end, my experience is rather limited. They were the more exploratory sort like the Ace Attorney games, 999, and Zero Escape: Virtue’s Last Reward. Having decided I wanted to broaden my experience with more visual novels, I decided to buy the original Steins;Gate. Having heard praise of this VN and the fact that it was on sale when I bought it, this was the perfect opportunity to dive in. Will my attempt to learn more about VN’s be an enjoyable experience or would it be something completely different? 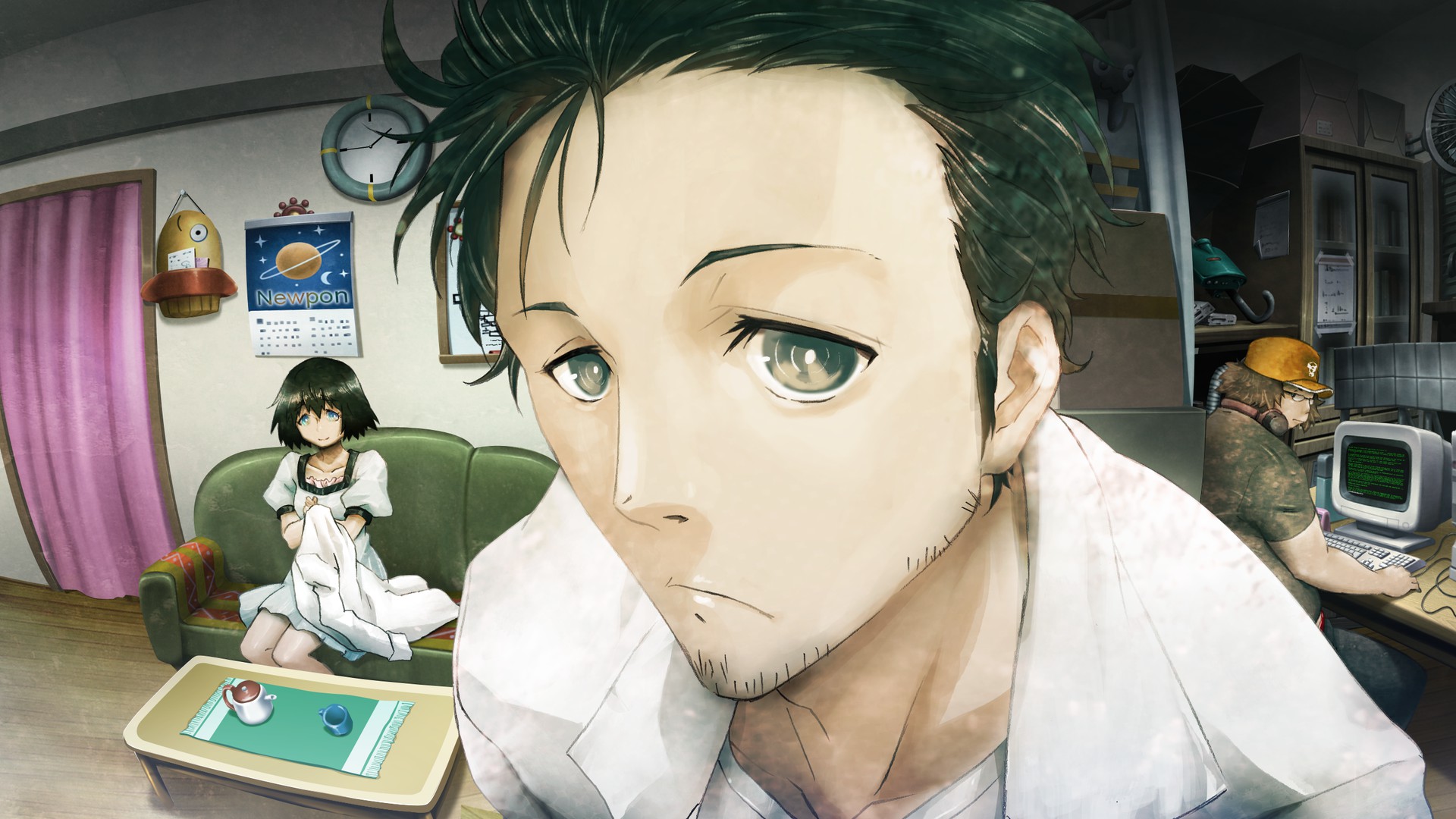 Steins;Gate is a science fiction visual novel originally developed by 5pb. and Nitroplus. Its story is an interesting tale about college students who accidentally discover that their malfunctioning microwave could potentially have the power to interact with space and time. Now they must solve the mystery of how and why it does that. Its main protagonists are Rintaro Okabe, aka the egomaniac mad scientist Hououin Kyouma; Itaru “Daru” Hashida, perverted super hacka; Mayuri Shiina, cosplay designer; and Kurisu Makise, neuroscientist genius. 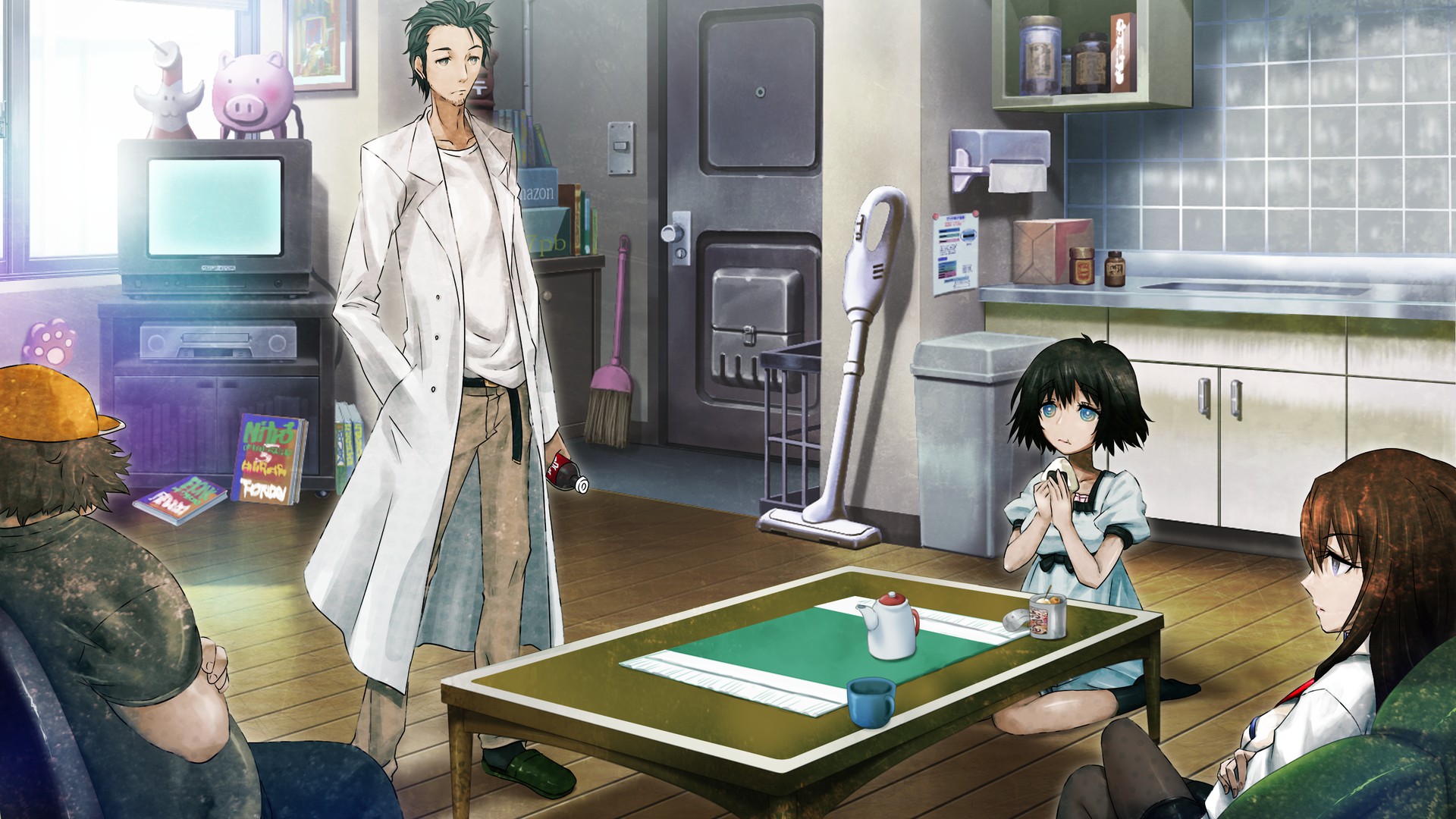 I wasn’t sure what to expect from Steins;Gate’s gameplay, so it came to my surprise how less interactive it was compared to its contemporaries. There was no exploration and no investigating your surroundings. So around two chapters in, I quickly learned that this would be a VN in a very traditional sense and you know what, that’s okay! The gameplay loop is a pretty simple one.

The story unfolds in a linear fashion, where most of the time all you would really do is press A to progress the story, which makes turning on auto dialogue a blessing. Words that are important to remember are highlighted as a tip and are added to your tip list, a menu where you can look it up its definition. Normally in VN’s your interactions with NPC’s determine one of multiple endings. What makes Steins;Gate different is the Phone Trigger system, where all of your dialogue choices with NPC’s take place within text messages on your cellphone. Most of the time, you are able take out your phone, see your inbox and outbox messages, your email contact list, and change your phone settings like the background and ringtones. With the exception of one character, NPC’s will often text you offscreen and there will be a few highlighted words you can select that will determine what kind of reply you will give. 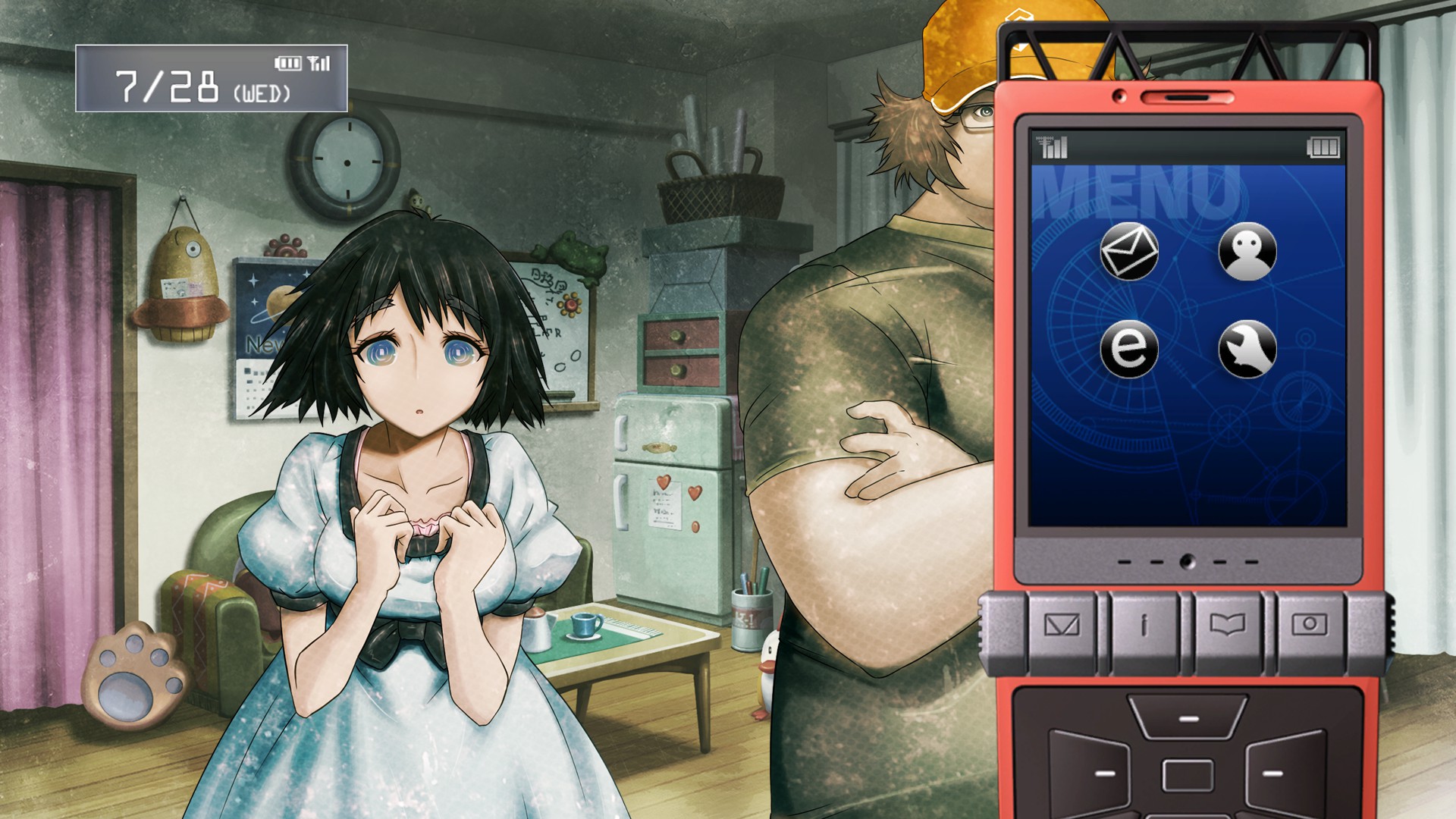 This was a very cool way to handle dialogue choices and I’ve never seen anything quite like it. The downside to this is that it will be very apparent that you will not be interacting with NPC’s that are in front of you. After accepting how Steins;Gate will work as a game, I decided to change focus on what really matters: Its characters and story.

This is where I think Steins;Gate falls apart. 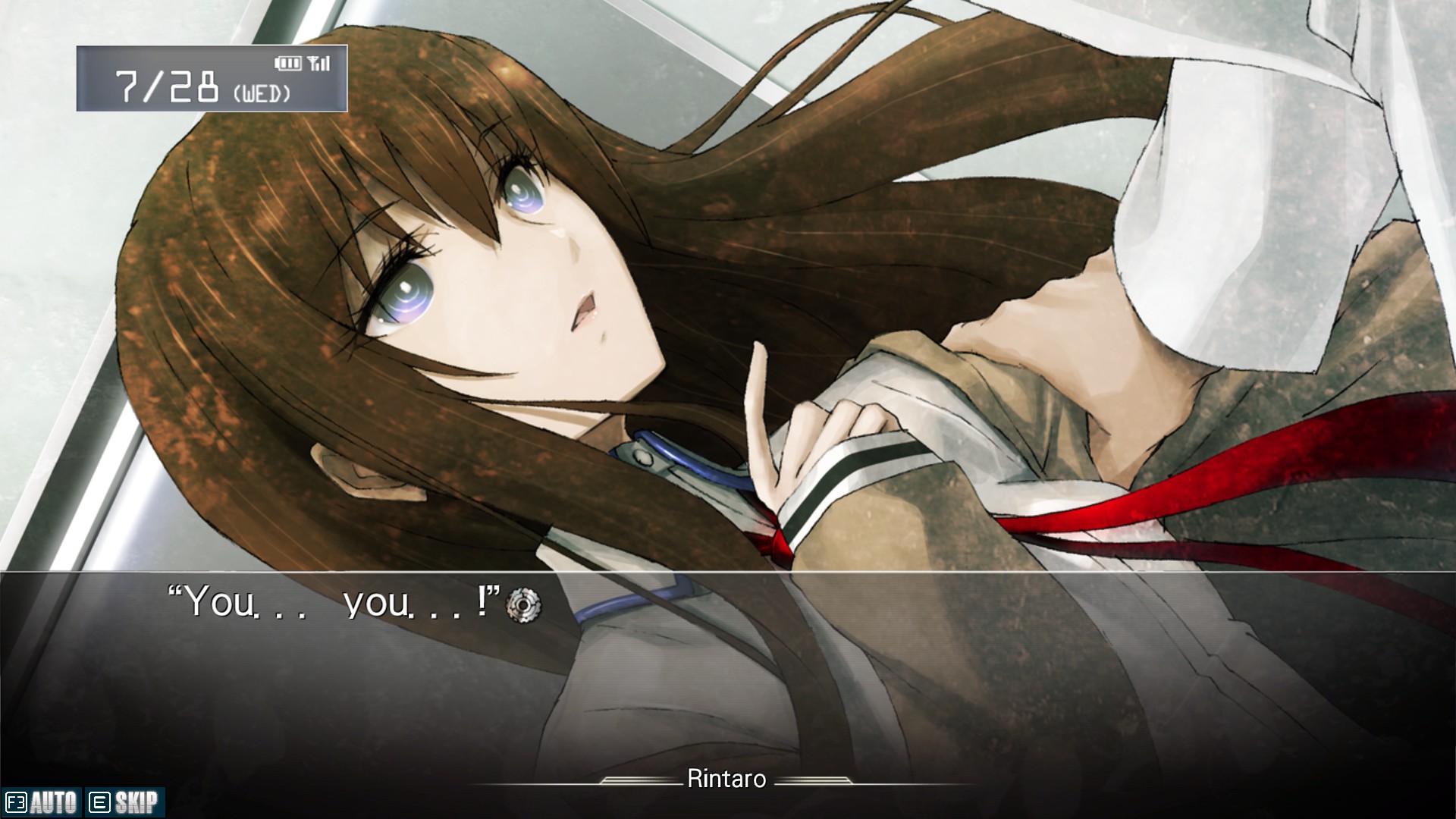 A story is only as good as its characters. If you can’t enjoy its characters, you can’t enjoy the story as a whole. Steins;Gate has a really cool sci-fi plot that is soured by its own protagonists. To be more specific, Rintaro and Daru. Both of them are terrible characters who have really aggravating personalities not just to other people around them, but to each other as well. Neither of them really changes as a person for most of the game.

To start, Rintaro is a rude, egocentric person who always talks about subjects he knows little about. He loves to play up his alias mad scientist Hououin Kyouma whenever to whoever he can. This is an obvious attempt at comedy and would be fine if he didn’t do this ALL the time. His antics always comes off as an asshole, especially towards Kurisu Makise. He talks down to her so much because of his insecurities towards her that she has resorted to just ignoring his immaturity. It would’ve been fine if some characters would willingly play along so you can get that they’re in on the joke but they don’t. Everyone’s frustration towards him only adds to my frustration. Whenever a serious plot development seems to raise stakes, Rintaro ruins it by being Hououin. It is also very unfortunate to say that he behaves this way for about 85% of the game. Having to wait that long for him to finally understand what’s at stake is, in my opinion, really bad writing.

Daru is pretty much the same way. He is a pervert and stays that way until the very end. He gets no character development at all and his sexual harassment behavior never truly gets addressed, only tolerated. Like Rintaro, the serious scenes involving him are ruined by his behavior. Daru finds Rintaro’s acts annoying and Rintaro responds the same way.

My frustration with these two characters has severely hurt my enjoyment of the game. They are perhaps the worst characters I have had the displeasure of knowing by far. And it is because of this, I will no longer continue playing it for other endings.

I wanted to play more visual novels and even though I had a bad experience with Steins;Gate, it won’t stop me from trying out others. It is such a shame that for a game with a promising story, its characters fizzled it out by the end.

- THE FUTURE IS YOURS!

Hey heys! My name's Parismio, great to meet ya. I'm a Dtoider who's been around for good while now. I'm into all sorts of gaming: Consoles, handhelds, and PC, the Ngage. Not a big fan of extreme fanboyism but when I show love to a platform, I love to show it the max! Note that I do like to change my avatar like every few months or so but starting from this bio I'm gonna put my past avatars up here in case y'all wanna see what I used to use or wonder who the hell I am. My last ones were: 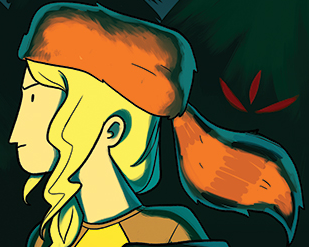 So hey, if anyone is interested in trying to friend me online, you can find all my gaming contacts in Dtoid's Master Gamer Contact List created by our dear Robo Panda Z:
https://www.destructoid.com/prepare-to-friendship-dtoid-s-master-gaming-contact-list-376128.phtml

So feel free to hit me up anytime y'all wanna get chummy. I may not be able to play with y'all at times but if you message me , I won't hesitate to at least message back. So that's me and I'll see you on the far side!