It is frankly surprising that Sega did not launch the Saturn with a Sonic the Hedgehog game. It becomes scandalous when you realize that the only Sonic game made for the console was outsourced to another company that naturally botched the job.

The reason that Sega did not bother developing a game for their biggest mascot is that the Sonic Team was making NiGHTS into Dreams, a game that would then go on to be a commercial and critical success.

Yet, in hindsight, while Sonic heralded the unlikely success of the Genesis, NiGHTS had no such effect on the fortunes of the Saturn. More important to this review, I don't think the game was ever a true killer game for the Saturn. 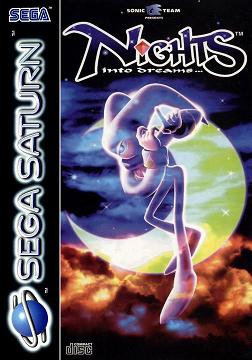 The development of NiGHTS is a microcosm of Sega's development philosophy during the Saturn era; to simply transfer the Arcade experience into home consoles. Besides the gameplay elements that I will discuss later, this also translates to a lack of a narrative focus in their games.

In this case, there are CGI scenes at the beginning and end of the game that does a good job of explaining the basis of the story. However, besides those two videos, there is no attempt in-game to flesh out the world or characters, relegating all the story bits to the game's manual.

Since I am not reviewing the manual, I must refer to what can be understood from the game itself. 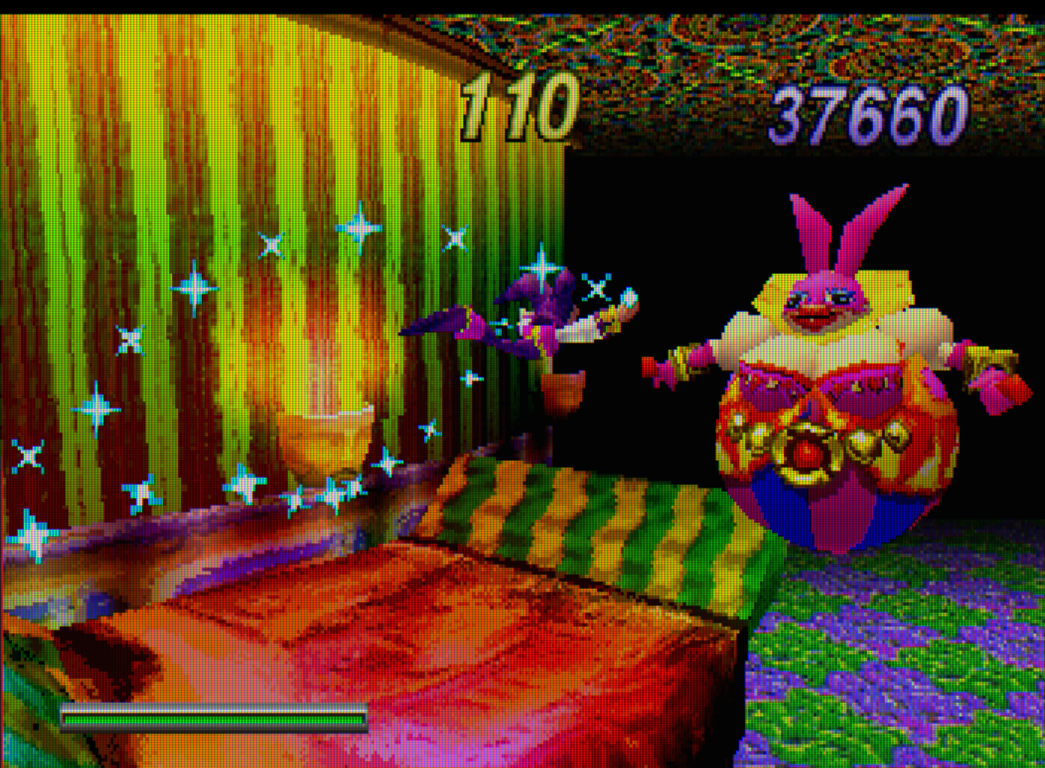 Which can be nothing much

Two children with anxiety regarding a coming musical audition and basketball match go into a dream world when they sleep. In this dream world, they lose four important orbs, then they transform into the titular Nights character and retrieve those orbs. Each of the game's seven stages is divided into four short parts where you get the orbs, and then you have to fight a nightmarish boss at the end.

Honestly, I don't think it was going to be hard for each stage to have half a minute introduction explaining what is it that you are supposed to be doing or just attempt to give the world some character. Especially when the overall design of the world does not sell a cohesive story (unlike Sonic)

The second part where the game is based on the Arcade experience is in its focus on scoring and replayability. No matter how you cut it, seven stages are very little compared to other games being released on the PS1 and SNES at the same time.

However, Sega's idea was to provide a unique and fun action mechanics that would get you to replay the levels, again and again, having fun in both beating your previous score and in mastering the game's mechanics.

This is the same philosophy that propelled the Sonic games, and it works well here for those who will greatly enjoy the game. 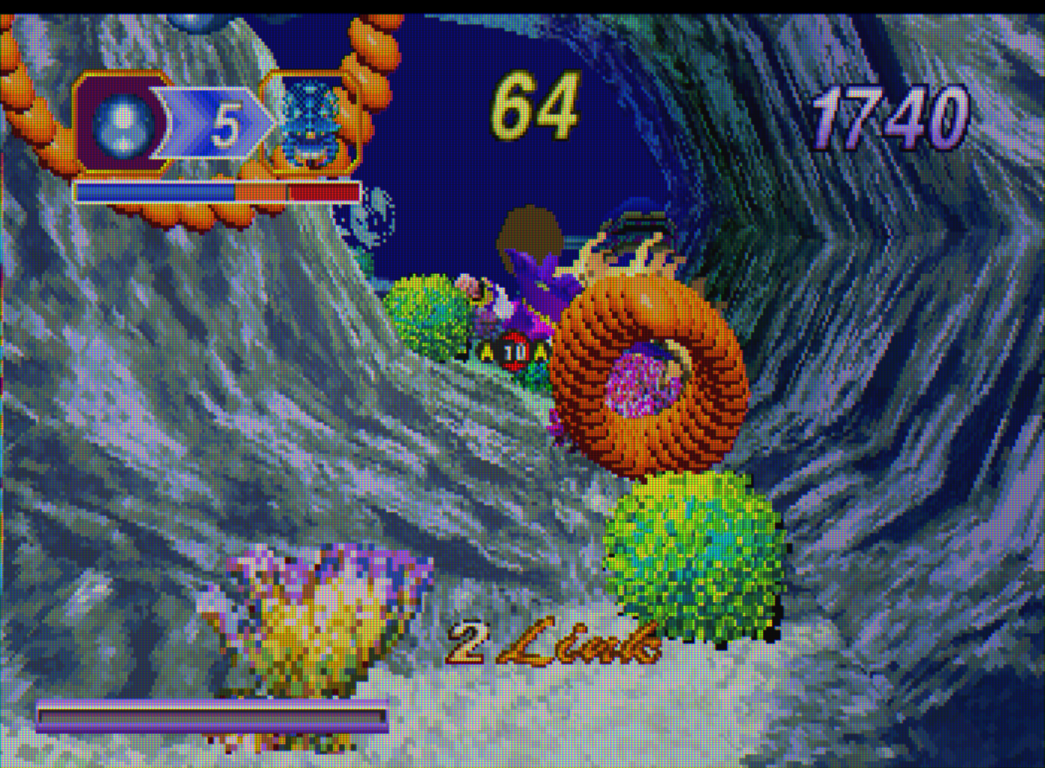 Or you will quickly get bored

The mechanics are truly unique, as gameplay is entirely focused on flight. As Nights, you mostly fly in a 2D plane (with an occasional shift in perspective that works really well), and you can freely go up and down and lop around. Your basic moves consist of an air dash and acrobatics that are there just for style. Once you get used to the gameplay mechanics, you realize that there is a lot of depth here.

In each level of a stage, you must gather at least 20 blue orbs to get the main objective orb. The levels rarely have serious hazards. Instead, there are a bunch of stars you can collect, rings you can fly through, and springs that increase your speed. The focus is to be as accurate and fast in flight as you can to get the best score.

While in theory, the Arcade style does work for NiGHTS, I don't think its unique gameplay style is as fun anymore, not to the extent that I will ever want to replay it.

The most surprising thing about NiGHTS is how its graphics did not age terribly, especially when compared to other mainly 3D Saturn games. It is obvious that the Sonic Team used all their graphical wizardry to make the game, which does look occasionally beautiful and vibrant, even in today's standards.

Even the CGI movie's quality is forgivable given its age and its effectiveness at conveying the story and emotions.

True, there are the occasional technical hiccups, but the game performs really well most of the time. Its graphical problems are not technical in nature but are rooted in design. 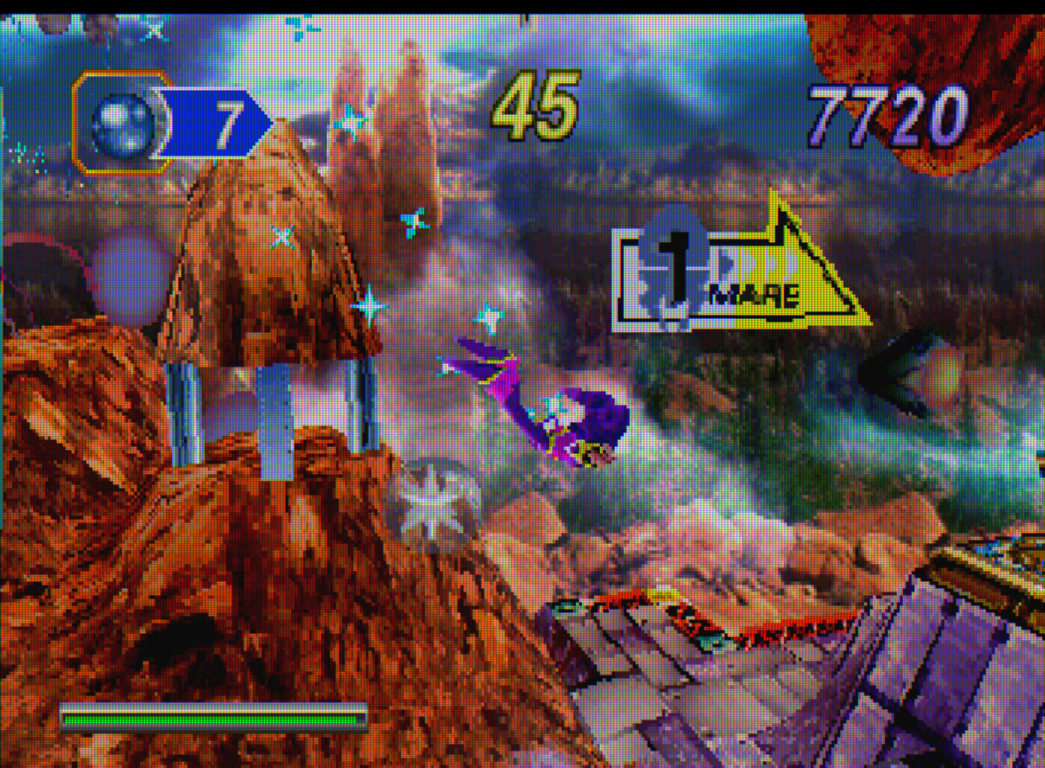 It looks better in action

Simply, from the main character to the enemies and bosses in the game, I simply do not find any of them attractive or well-designed. In fact, the best quality they have is a certain cohesion in their creation, which makes them cohesively awful.

The same cannot be said about the soundtrack, which is technically strong and a joy to listen to. Since there are only a limited number of stages, the soundtrack is as such restricted in scope. Which is a shame, since its probably the only unblemished part of the whole package.

I even liked the cheesy end-credits song.

As a replacement to Sonic, it was bound that NiGHTS would sell highly for the system. However, I don't think it brought people specifically into the console's eco-system, nor do I think that it is equal to the blue rodent's style or substance.

It is simply a unique action game that encompassed the limited and flawed design philosophy of Sega at the time. 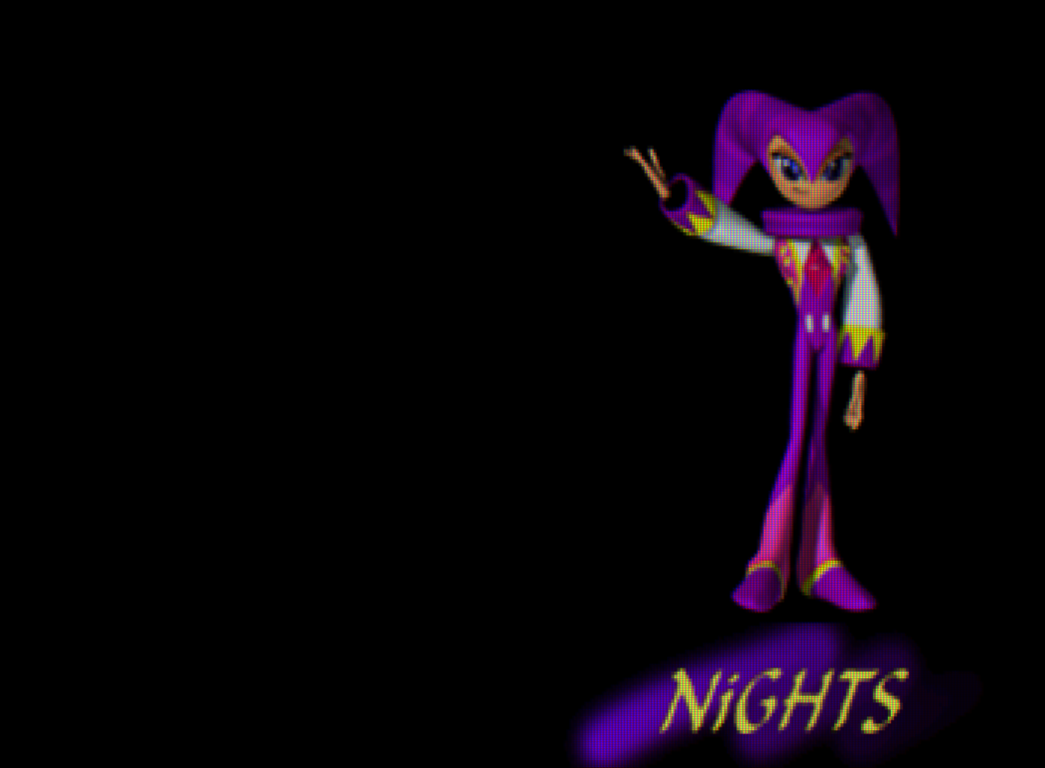 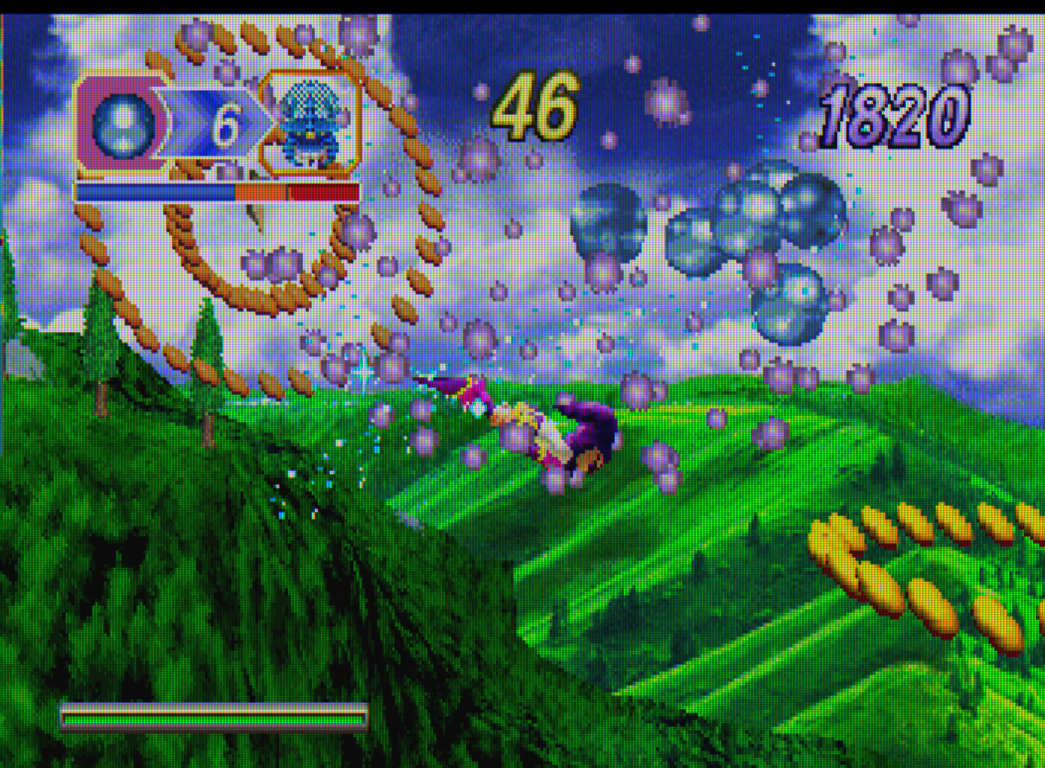 Man, these still images do not flatter the game

1- Loop around items to get all of them in one step.
2- You can use the shoulder buttons to do acrobatics.
3- Immediately attempt to get the 20 blue orbs in each level.
4- You need to get at least a grade of C in all six levels before you unlock the final seventh level. 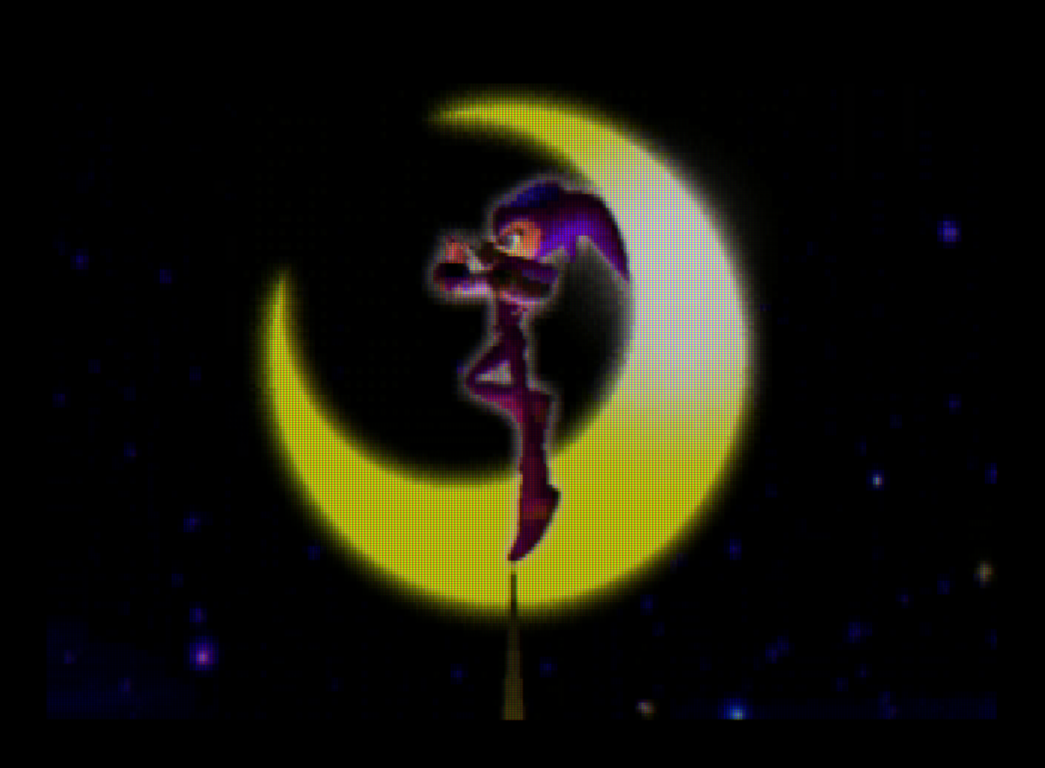 By hook or by crook, Sega will make this an iconic image

The next game on my review list is Panzer Dragoon II Zwei, which sits at #4 in the Retro Sanctuary list. I will play the Panzer Dragoon (which has been recently remade) first, and I may review it, just to have some context regarding the supposedly hugely improved sequel.