PopoLoCrois is a JRPG developed by epics inc. and published by SCEI, Agetec and Marvelous for the PSP in 2005-2006. It's a compilation of the earlier Japan-only PS1 games based on the anime of the same name. The story follows Pietro, the young prince of the titular kingdom who embarks on multiple adventures to save his land alongside a sizeable cast of colourful characters. 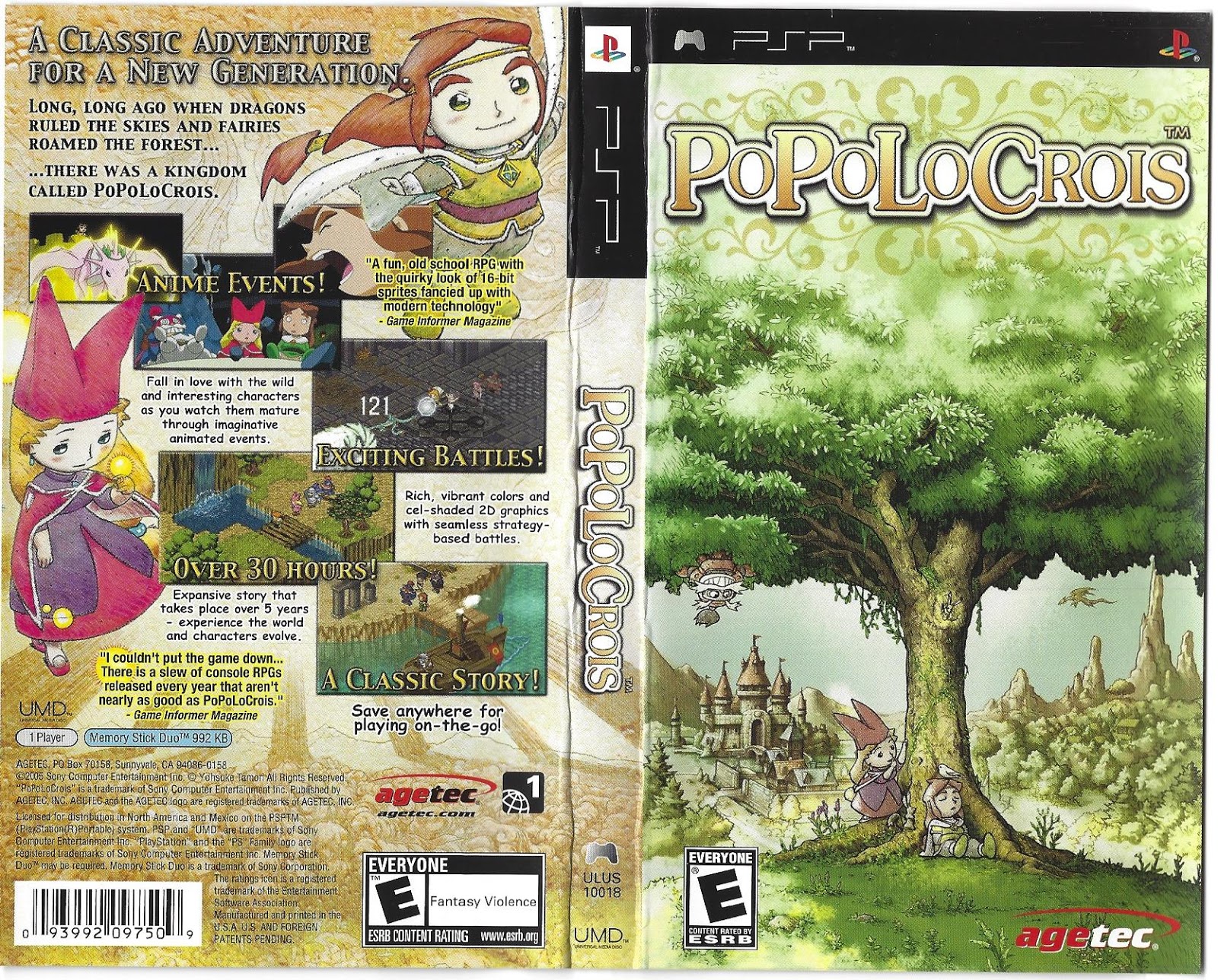 This Is The Story of Prince Pietro & Pals

The easiest way of explaining the story and setting of PoPoLoCrois is to say that it's a fairy tale filtered a bit through JRPG conventions. It reminds me a lot of Chrono Trigger and Dragon Quest, but it doesn't feel entirely derived from those games. It goes in hard with the fairy tale aesthetic, even going so far as to have a lot of scenes shown through narration and a minimal amount of detailed pictures, just like a story book. There are a nice amount of anime cutscenes present as well.

As an extension of this, the actual story is also structured like a fairy tale. Pietro's adventures take him through a bunch of varied places, but beyond the more central locations, you really don't get to spend a lot of time in many of the game's areas. You could easily summarize the events of the game like a fairy tale using a minimal amount of detail, so I think they succeded in their vision for the story.

As a result, the story isn't really that interesting, since the characters are drawn with such a wide and simplistic brush. Characters are always exactly what you think they'll be at first glance. Not to mention that it's very much aimed at children. But goddamn if it isn't the cutest fucking thing told through sprites and text boxes!

The game is simply brimming with detail and charm. There are countless sprites of weird characters in the game, the areas are varied and the whole thing is just full of life. I'm not sure if I've ever seen better spritework than this, at least not to this scale. The game even goes so far as to have a few shows you can watch that only exist to excuse even more unique sprites and animations!

It's a weird concotion, at the end of the day. I didn't care for the story, but the world itself was so engaging and the pacing so quick that I was still entertained the whole way through. It's this perfect combination of music and art that elavates the story beyond its means.

Focus On The Grid To Win

Keeping in tune with the story, the combat is incredibly simple. So much so that I'd argue that the game works as an excellent introduction to the genre. The game even sets party members to automatically take actions for you unless you disable it. It does leave things kinda braindead for veterans, but again, the pacing is good enough that you never get bogged down by fighting. You even get a spell that shuts off random battles pretty early on.

Once a battle triggers, the overworld gets turned into the battlefield, but unlike in Chrono Trigger, it doesn't happen at designated points, nor does the topography of the area get ignored. Combat takes place on a grid and the grid overlaps with the actual map, meaning that a character's ability to move and attack is heavily influenced by where you're fighting.

Once a character's action bar is filled, their turn begins and you can move them a set amount of squares and attack (using a regular attack or skills that cost MP), focus attack for a turn, use an item or run away. Depending on what angle you attack from, you can deal extra damage, but that holds true for enemy attacks as well, so it's important to not leave someone's back open.

Focus takes a turn, but increases attack power and allows for team-up attacks. Said team-up attacks being very hard to figure out, since two party members need to stand in very specific positions before it'll trigger the prompt. And even if you figure out a combination, you can't ever review it in a menu, so you need to remember it. And even if you do, their usage is limited, since they can only be used once per battle and do not scale like the rest of the skills do.

The foundation here is pretty good, especially for teaching a younger player concepts like positioning, status effects and buffs, but all that goes out the window since the game is so unbalanced. I say that because focused attacks are incredibly powerful and a lot of skills hit wide enough that you can trample a whole party of enemies at once with it.

As a result, in close to every battle, I made appropriate party members focus at the start, eat a hit or two and then just end things immediately afterwards. From beginning to end, this was combat. Bosses have large enough health pools that you can't just kill them instantly, but they still didn't put up much of a fight.

I shouldn't harp on the combat so much since it's obviously meant to be easy, but even so, it should get harder as the game goes on and not reward a singular approach to this degree. It was still fun to shred through combat encounters like that, but the game should at least make me break away from my attack algorithm once or twice. Gotta stimulate that there grey matter somehow, you know?