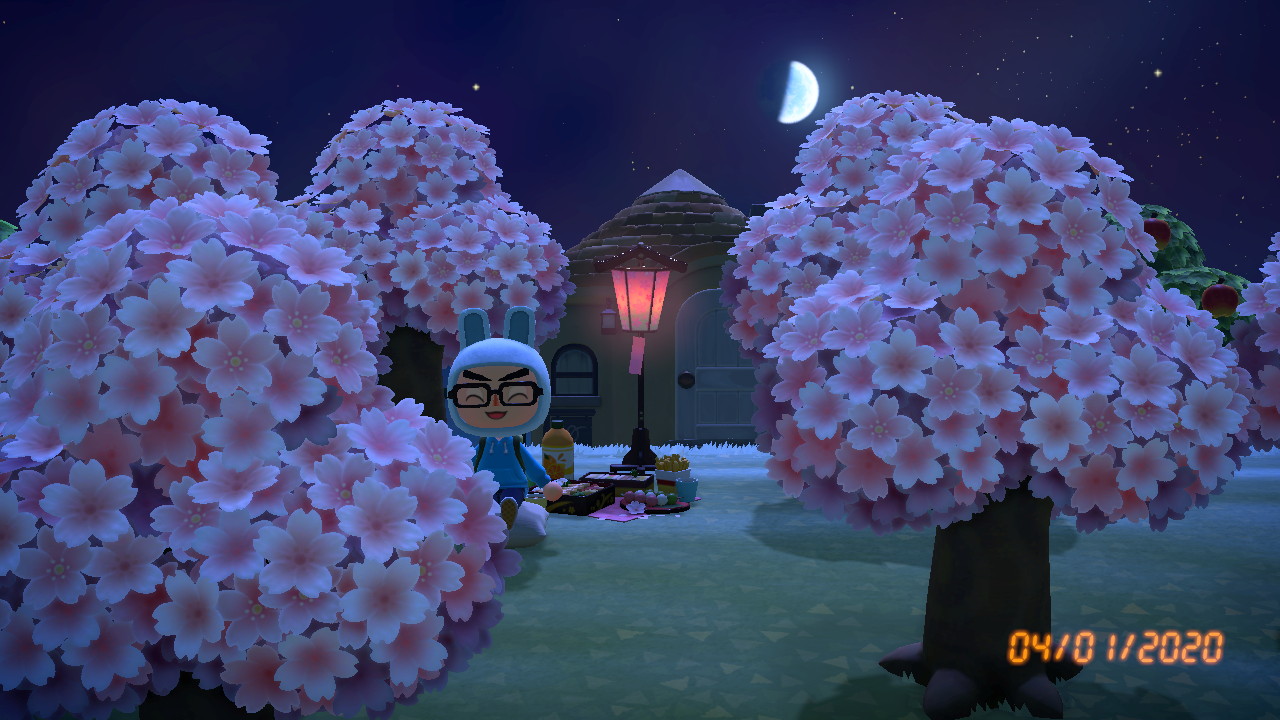 After about a week of New Horizons, I’m finding it difficult to put down when I know I should be playing less of it and I know I have other games I could play. Last night, I could’ve booted up Nioh 2 again, but C.J. was in town and I wanted to make some profit off his marked-up fish purchases. But a lot of my effort to sell him fish was stalled out by water eggs from Bunny Day. But after three consecutive eggs, my player character thought, “Yo, fuck these eggs. I’ll just turn them into clothes.” and immediaetly cooked up a DIY recipe to wear eggs shells as a hat, shirt, and shoes because I’d gone mad from the insanity of quarantine and driving to essential work where most of my clientele scoff at the idea of total economic shut down as unnecessary to stave off a global pandemic.

So anyways, here’s what I’ve done so far, before I write about what I did yesterday and today.

In terms of sheer progress, I have six villagers, the last being the test run of the new camping campaign Tom Nook thought up. A few days after I bought my first plot of land and set it down on the highlands having since established a ramp up to it. The Able Sisters are in town as well, and I regularly blow thousands of bells not only on new outfits but on green and blue color variations to color coordinate my outfits. I don’t do this in real life but I feel like it would be a boost to my confidence if I did. So far I have a green kimono wearing chill outfit that I call The Art Director, a yellow bunny hooded chef get up, and right now a blue bunny cardigan outfit with lots of extra glasses to share between quick changes-where the hell is the frog hood?

The campsite is decked out with a lot of outdoorsy quality of life furniture and there are a lot of other public works-like highlights around the island spent with Nook Miles like a few vending machines, a playground in front of the museum, and a lighthouse out the lookout point. I also have private beach property because I’ve always been jealous of those pricks out at Malibu who insist the shores under their homes are private property when it clearly is public land. 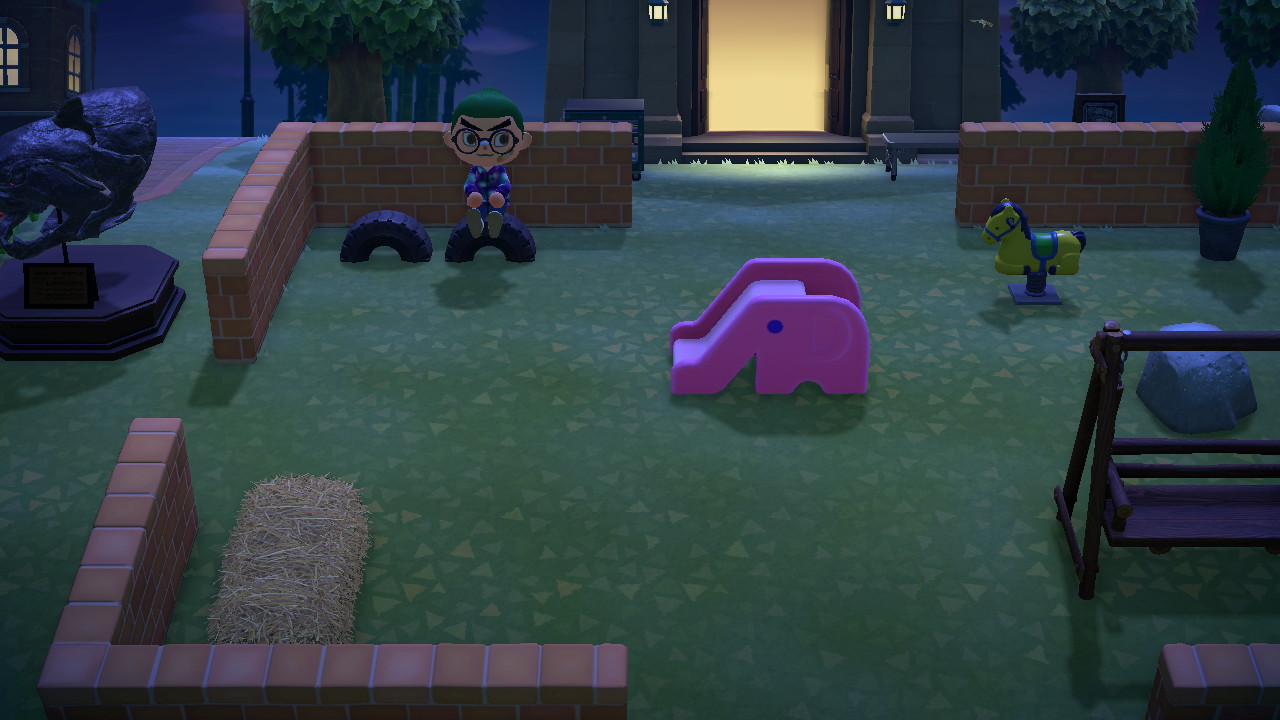 So what of recently? Well, I’m working on my next incline, which will lead up to the campsite, making the whole of the island accessible without need of a ladder. None of my bridges or inclines are particularly fancy, the cheapest, most basic version of them. Later if I can sit on a nest egg of bells, I plan on demolishing them after setting down nicer replacements next to them. I’m sure that’s how things work when California freeway authority does the same thing on my nearby highways. The Bunny Day furniture is super gaudy and I’m not interested in making it, but all the cherry blossom related items are really clean and slick. I’ve already made an impromptu cherry blossom viewing spot in the middle of town, surrounded by cherry blossoms with a cushion, party snacks, and a viewing lantern. I hope to step onto the next level of design with pathways when I unlocked it but for now my village is rather natural in aesthetic and partitioned in convenient ways. Hopefully the future villagers who move in are posh as they’re going up onto the highlands past The Able Sisters and with a naturally better view of the island.

Mirroring my real life financial habits, I’m saving up bells in my bank account to pay off my debts in full rather than pay it down directly and gradually. Wait, I am talking about Animal Crossing, yes, not my closed credit card accounts. But after some fruitful island trips and fish excursions, I think I’m about to pay off most of my outstanding invoices, which of course will lead to bigger expansions and bigger debts to pay off. But hey, I’ve been loving all the kitchen inspired posts I’ve been seeing on r/animalcrossing and damn if I don’t have oodles of kitchen appliances sitting in storage.

New Horizons have even altered a few of my old Animal Crossing habits. The biggest being I used to walk around with the bare minimum tools in my pockets to keep them clear. But now I like to keep a few extra items in case I feel like giving a villager a nice gift. It matters because they always use it, whether they proudly display it in their home or immediately wear clothing and accessories. Have you seen a hippo put a pair of sunglasses on its snout? It’s the funniest shit I’ve ever seen. And the fact that villagers have gone from simply walking about to doing so many more visually interesting things as they pass the time. I’ve come across them doing yoga, having impromptu drinking parties, and even recreational Naruto running. If you invite yourself into their home, they’ll sometimes be in the middle of doing their own crafting, and if you talk to them, they’ll share their infinite, eldritch knowledge of making funny chairs and benches with you.

Usually, when I’m in between tasks, I like to just visit my friends’ islands. The process has never been easier as you can imagine the process would be five years ago on the Nintendo 3DS which wasn’t always connected to the internet. Asides from an 80% quarantine on the human population keeping people indoors and trying something new before their fragile grip on reality slips away into an seemingly endless abyss of stagnation and despair, the fact that the Nintendo Switch is a popular get right now also helps in giving me a diverse and active list of friends who open their island’s doors. It’s fun to drop in, check on things, buy stuff from their stores, and check on the stalk market prices.

But all in all, it’s been a nice experience. Nook Miles and crafting have given New Horizons the most structure of anyways game before it and I know what I want to do everyday I play it for a little bit and get little surprises like what furniture I specifically get of what crazy dumb thing Clay the hamster will say next. It’s been a blast playing it vicariously alongside many more people than I ever thought before too, and in fact I’m afraid I didn’t play up the social aspect enough. One of my friends has a meme museum set up. Another has several instruments set outside for spontaneous jam sessions. Even something as simple as being able to mail friends letters with gifts at any time without any needless bullshit that would’ve gotten in my way in older systems like the 3DS bring a little smile along the way every time I see some item that’s not my taste but I think, “My friend would love this.” 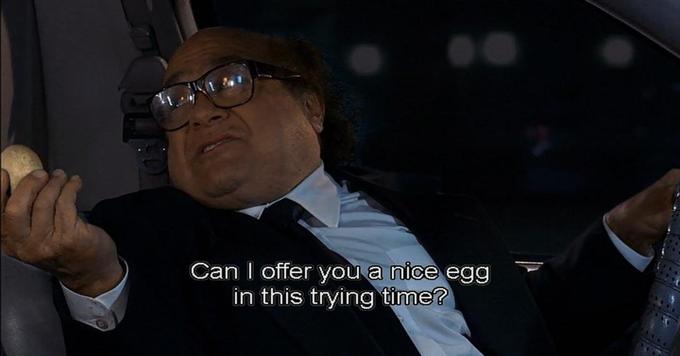