This is one game on the Saturn I played knowing pretty much that it would be good. After all both Shining Force games on the Genesis were very good and are among the top 10 games on that system.

Yet, it appears that Camelot  Software had much higher ambitions for the game than merely being good. Years before the Tactical RPG behemoth, Fire Emblem, experimented with different storylines and perspectives with Fates and Three Houses, Camelot planned to release Shining Force III in three parts.

This ended up crafting a game with a rich and complex storyline, one that could have been seen as a great competition to the RPGs of the PS1. However, due to the decline of the Saturn, Sega of America decided they were only going to localize the first of those three games, thereby depriving Western gamers of the rest of the story and what could have been a legendary game for the system.

Still, it is a testament to its quality that even with a third of its story with no possibility of continuation, the game still managed to shine through. 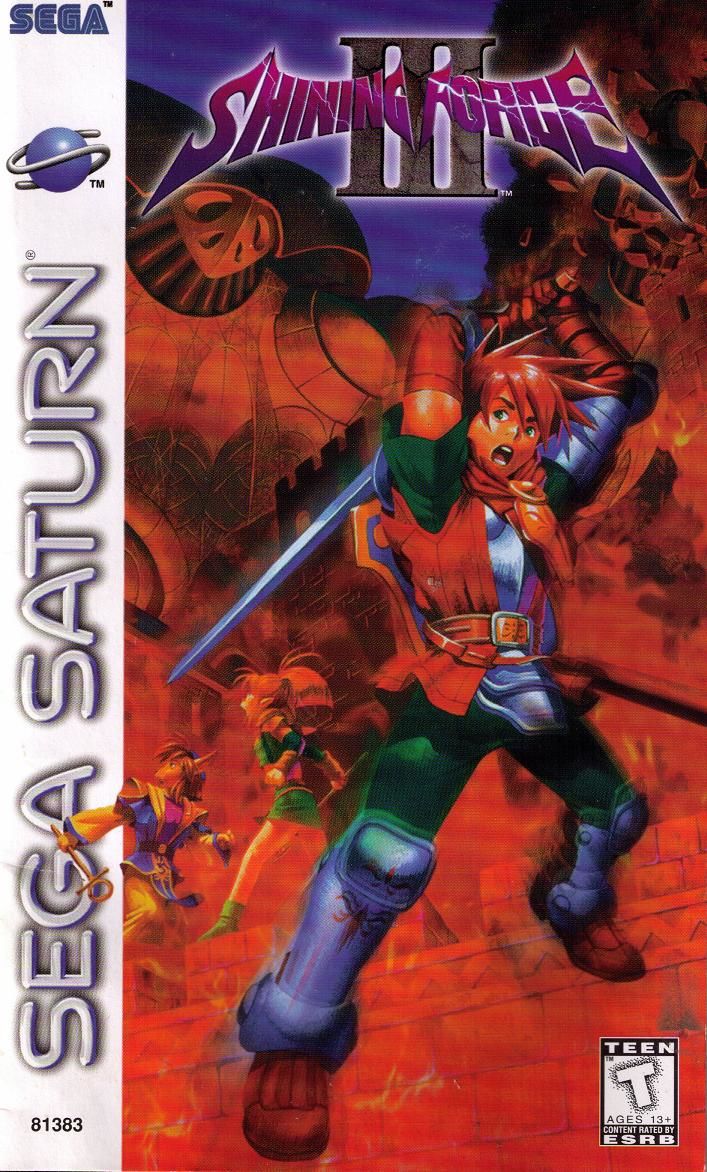 "When ideologies come into conflict, bloodshed is almost inevitable. Humans... how ignorant we all are"

The game starts with you naming the three heroes that will play a huge part in the events of the game, but the first scenario will only focus on the exploits of Synbios, the son of a famous general of a new Republic that sprang from previous territories controlled by the rigidly feudal Destonian empire.

Slightly prior to the start of the game, the Destonian empire managed to invade and conquer an important Republican city. To resolve the conflict before it becomes another all-out war, a peace conference was called by a neutral third party.

As to be expected (or else we won't be having a game), the peace conference not only fails but quickly exacerbates the situation. What ensures is a well-told story of political intrigue, ideological conflicts, personal struggles, and good old ancient evil cults that all mixes in really well. 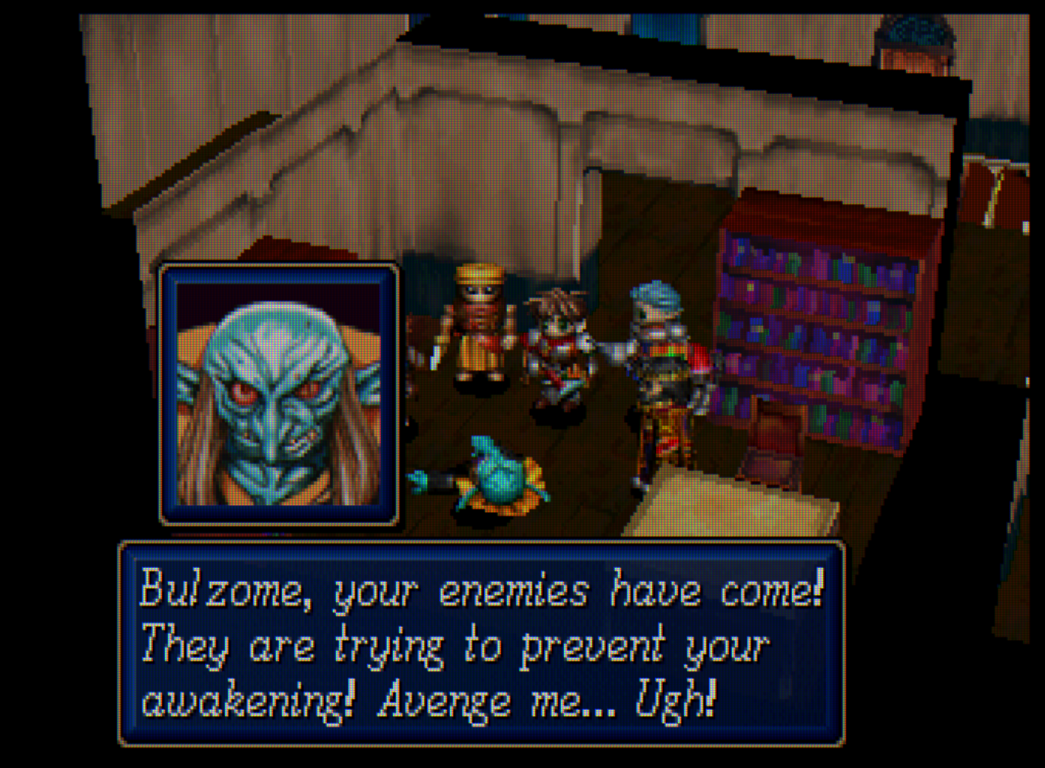 The good old Vandals are at it again

Previously, I complained about the simplicity of the storylines in Shining Force I & II. However, this is not the case here. In fact, it is a continuously engaging story from start to finish.

Since this is a review of the first Scenario only, I won't dwell too much on the three-pronged story other than state the obvious fact that it means certain elements will be unclear and several characters will not have the resolution that they deserve. Overall, the first scenario concludes with an ending that doesn't introduce new questions but leaves some questions unresolved.

Yet, even without experiencing all three scenarios, it is clear that the ambition to tell the story in three parts is what lead to Camelot crafting a story that develops intelligently and shows room for different perspectives, even if it doesn't allow all those perspectives to fully develop.

One thing that could have been better is the involvement of the playable characters themselves. Usually, other than through a pre-battle small conversation, the various playable characters don't develop much except for the core group. This was a point of common concern in TRPGs back in the day and was only truly resolved through the now-classic support conversations in the Fire Emblem series.

"Listen up, you Republican buffoons. I'll take my leave with the Emperor now, your pathetic lives end here!"

Besides the advancement to its story, there isn't much changed from the basic template that worked so well for the first two Shining Force games. This is still a TRPG with all that is expected from the genre.

Up to 12 playable characters take the field against an assortment of enemies. Turn order is decided by the Agility stat. It pays to keep your formation intact. Experience is awarded based on damage dished out, healing, and kills. Character gain level, skills, and can be promoted. And, of course, characters come in a variety of classes. 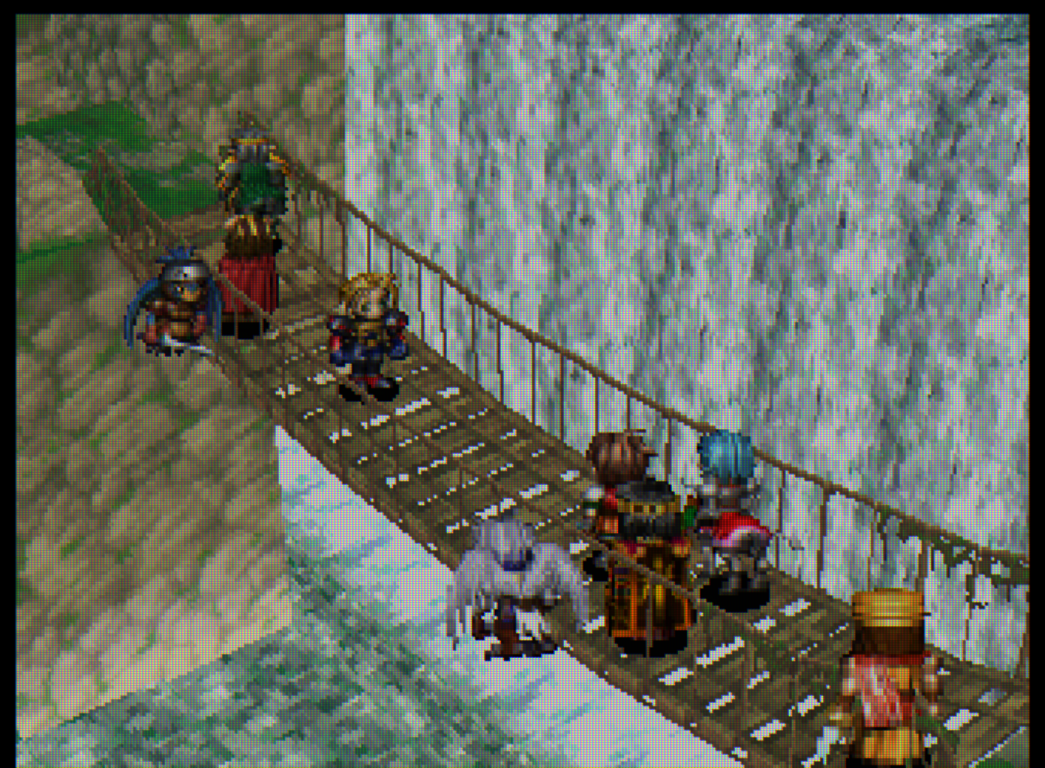 There are five different classes in this bridge alone

This formula works well due to the variety of the characters at our disposal and the general balance and occasional change in the many battles you are facing. Typically, there are two to tackle any battle. First, there is the safe block of doom approach, where all of your force moves in semi-unison to clean up the field. Second, the more fun and efficient way of dividing your force into squads and decimating the enemy in as short a time as possible.

Playing the game the second way reveals how the game provides more tools to both develop your force and finish battles more efficiently. Mainly, the addition of a trust system between encourages maintaining a squad between battles as it increases their overall performance. Also, the addition of super attacks showcases how strong your characters get by the end of the game.

Without being revolutionary, the gameplay is consistently engaging and fun.

"Many lives were lost... for nothing. If we do nothing, more will perish"

Outside of battles, the game offers what looks like a classic JRPG world exploration. With NPCs to talk to, items to buy, treasures to find, and even secret characters to recruit.

The latter activities may offer the most frustration to players as the "inspect" every box and barrel looking for precious mithril ore that they can later craft into amazing weapons. Yet, that is secondary to the possibility of missing a playable character because you didn't want to explore all the houses in a city (although you really should do that in an RPG). 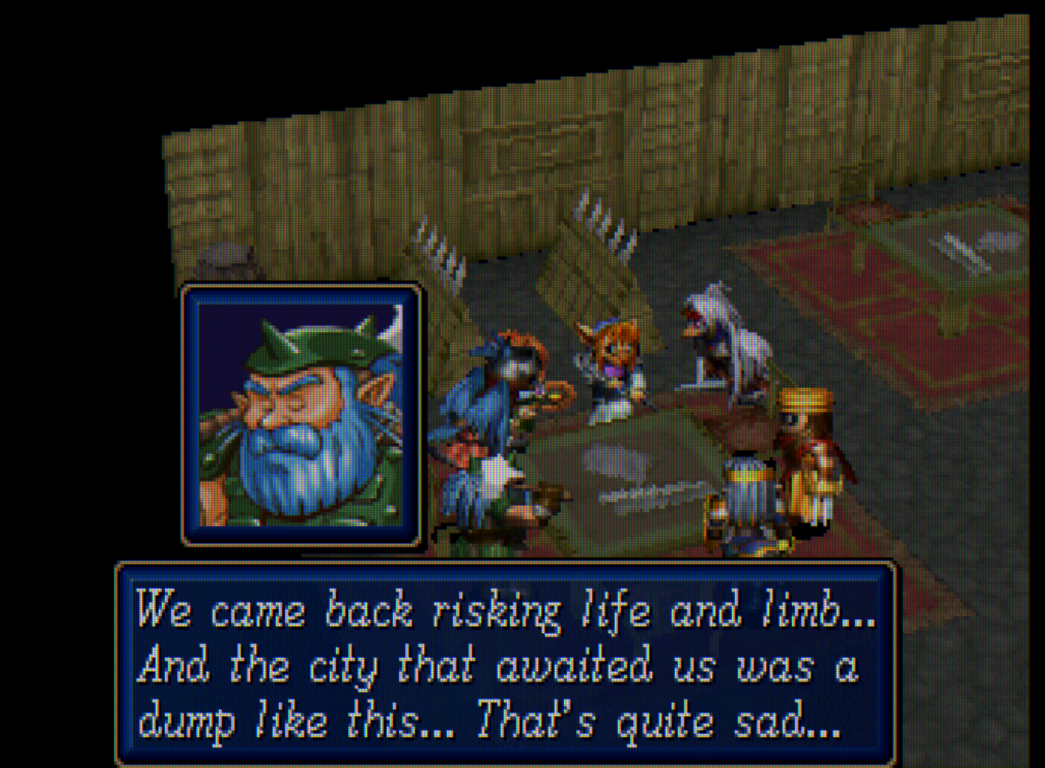 You can talk to your army during this downtime

Yet, this has always been part of the series's charm. The fact that it had the world-building aspects of any other JRPG. Generally, the NPCs do a great job of giving more context to the world and both story and dialogue are decently good. As such, even the downtime between battles is necessary for the game. Also, if you like, you can always forgo looking for items and just rush the story along.

Ultimately, there is no real gameplay in the sections between battles and the preparation aspects could have been more efficiently presented in menu screens. However, these "pillow" moments between battles serve to give greater context and contrast to the rest of the game.

"All of you... these chumps are slowing our progress! Eliminate them all so we can get back to business, stealing treasure!"

If you read some of my other Saturn reviews, you would probably guess what I would say regarding the switch fro sprites to 3D polygons in the game's graphics. It simply is not as pretty or "age-resistant" as the Genesis games. Especially when contrasted to the obviously beautiful 2D character portraits (those are still great).

However, there is enough charm in the character's chibi polygonal forms that the majority of the game looks fine. It is only when character initiate attacks that the game shows them in more "detail" (meaning more jagged edges and blocky features), which is also surprisingly competent. Better than Final Fantasy VII for reference.

In fact, the graphics were probably damn impressive by the standards of the day. Especially for the magic and special attacks, which must have appeared revolutionary at the time. Now, they are just random explosions of jagged edges and garish colors. 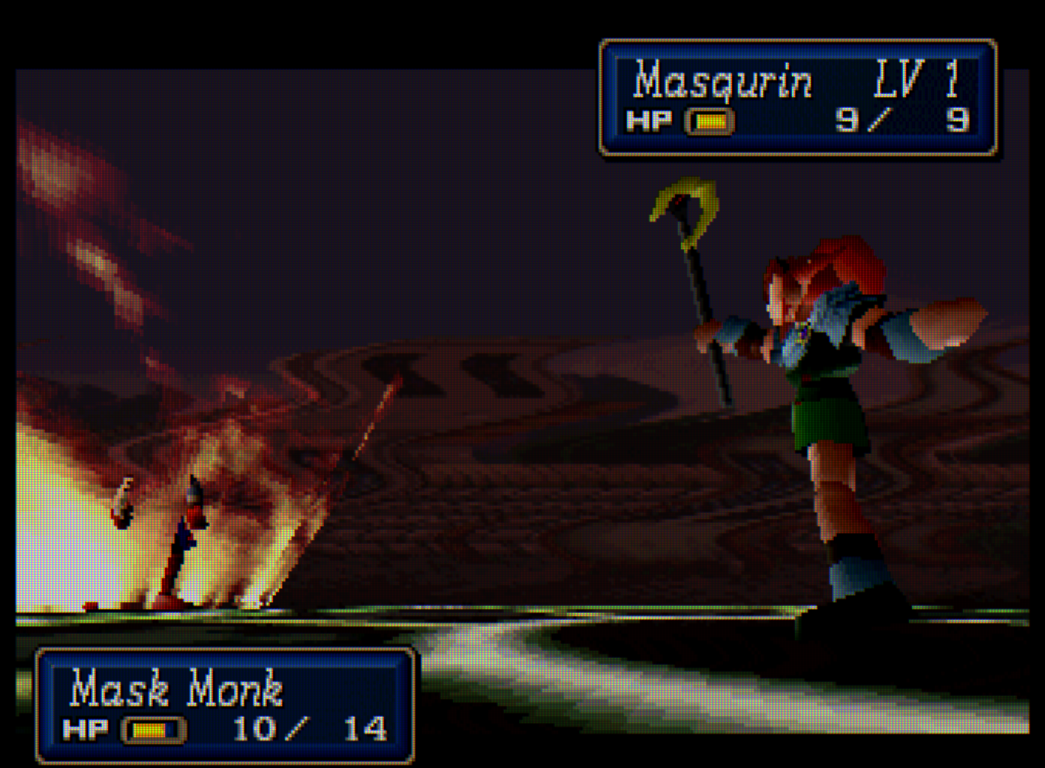 This is one of the less offensive looking magic spells

One thing that didn't negatively age is the game's soundtrack, which was crafted by legendary composer Motoi Sakuraba of Tales and Dark Souls fame. It works really well,  both inside and outside battles.

However, its best use was ina accentuating the more dramatic scenes, always playing the right theme at the right time, adding drama in lieu of voice acting. It is a stellar soundtrack with "The Opening" and "Flying Dragon of the Battlefield" being some of my favorites in the game.

Besides the fact that it doesn't actually complete the story, with two other scenarios never localized, Shining Force III never gets a foot wrong. In fact, it even manages to make the best of its inferior polygonal graphics, making them charming despite the technical limitations.

Simply put, it is a great Tactical RPG that is pushing me to go and play the fan translations of the other two scenarios, which is something that I never did before. 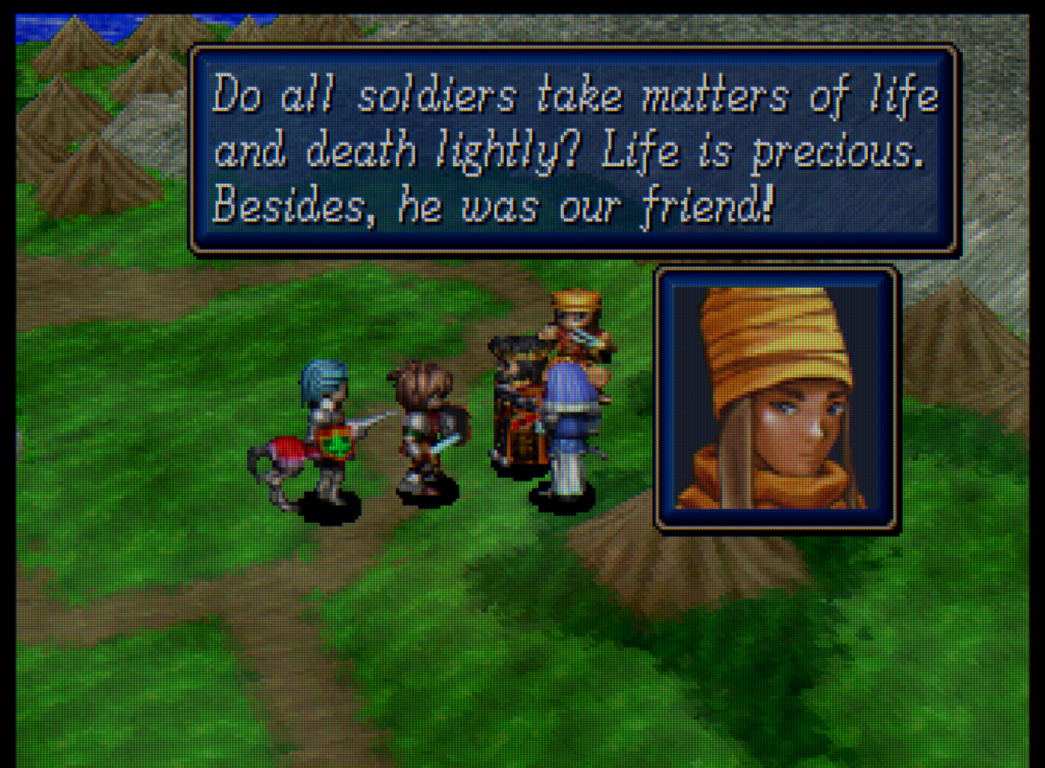 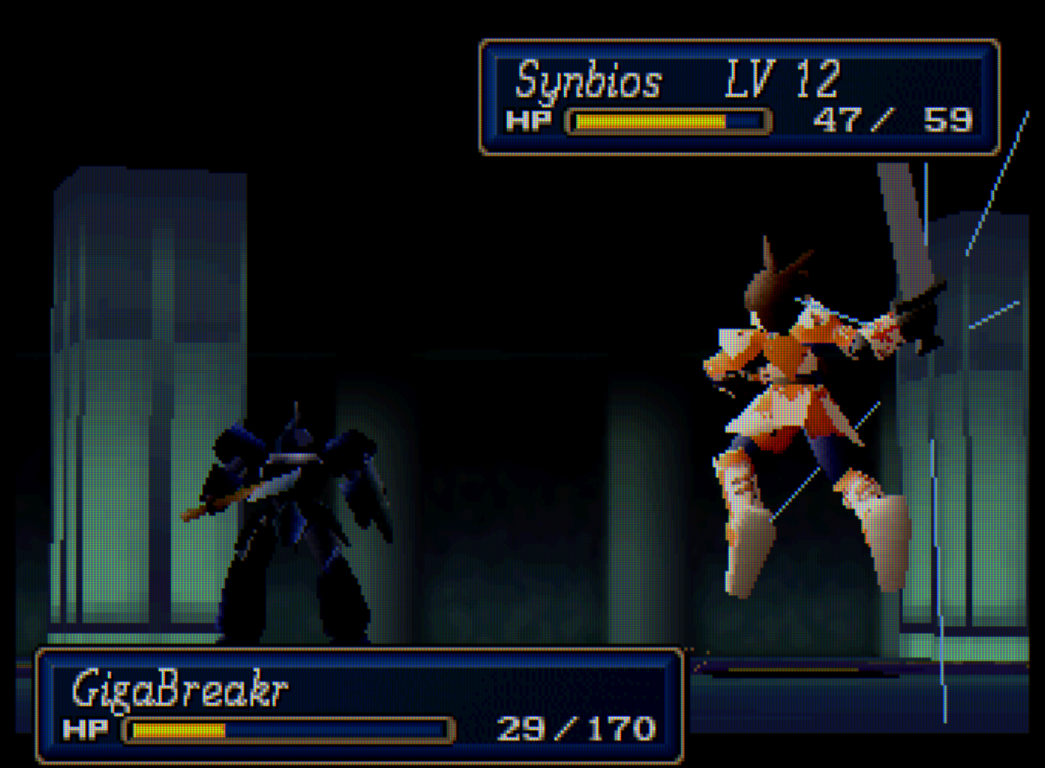 The Moment of attack

1- For maximum efficiency, don't upgrade character class until they are at level 14-15.
2- Don't worry about leveling-up fringe characters, there is a dungeon at the end where you can gain levels very fast.
3- There are a lot of items hidden in the game world.
4- Pay attention to save some characters if you are planning to play the other two SFIII games.
5- Make sure to let all your characters involved in a battle to level them up semi-equally.
6- Use the same weapon class with a character t increase their proficiency with it,
7- Healers are your friends.
8- The earliest characters you get are always the strongest. 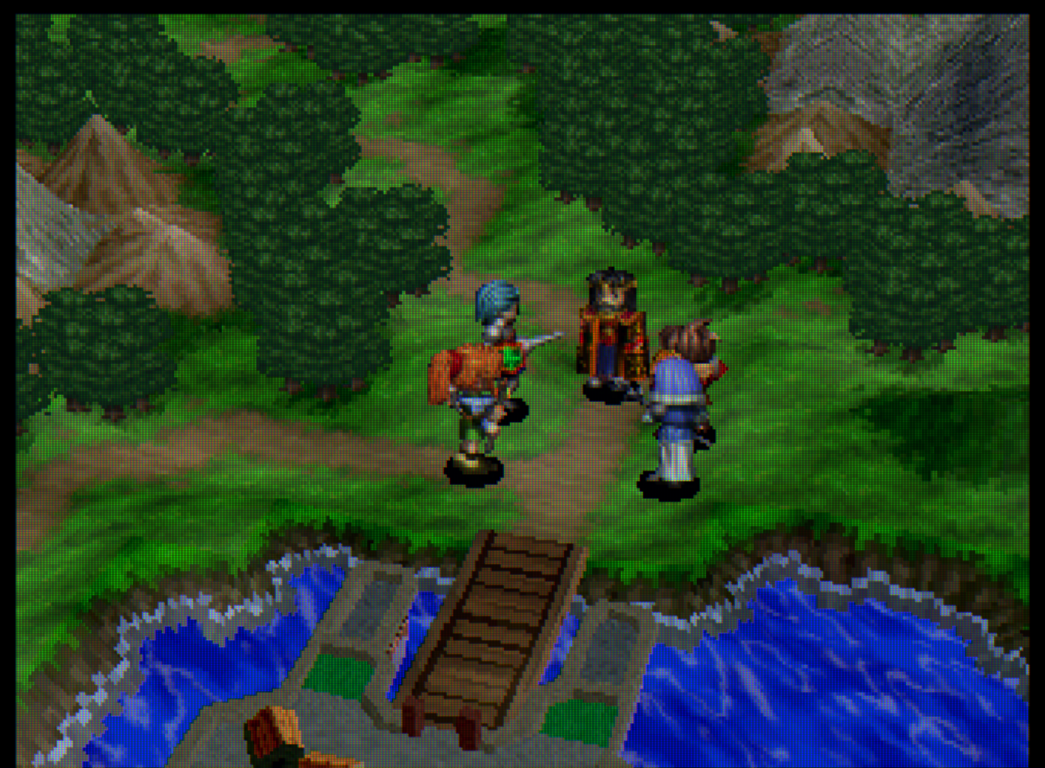 As expected, I had a great time with Shining Force III. So much so that I am actually going to play the fan translations for Scenarios 2 and 3 (but I won't review them).

Later, I will continue my Saturn review series with a review of Clockwork Knight which is requested by one of my readers. I hope it is a fun game.