Summer is generally a dead zone when it comes to video game releases. Between having to compete for ad-space with big-budget blockbusters in Hollywood, and their target audience often being away from home, it’s understandable why. The Nintendo Switch, being a hybrid console, doesn’t have to worry about this as much as its competitors do. So, what does Nintendo do with this advantage?

They just casually release a GOTY contender in July, no big deal or anything.

In many ways, I can relate Fire Emblem: Three Houses to my college experience. I went into both thinking they were going to be fairly vanilla experiences, but ended up being significantly impacted by both in ways I wasn’t expecting. Sure, maybe I second-guessed my decision before I got comfortable, but the longer I stayed, the more reasons I found to keep on trucking.

There is a lot to do in the newest entry in the Fire Emblem series, much of which is new to the series. The gameplay can be divided into one of two categories: The Monastery/Prep work, and strategic, grid-based combat. 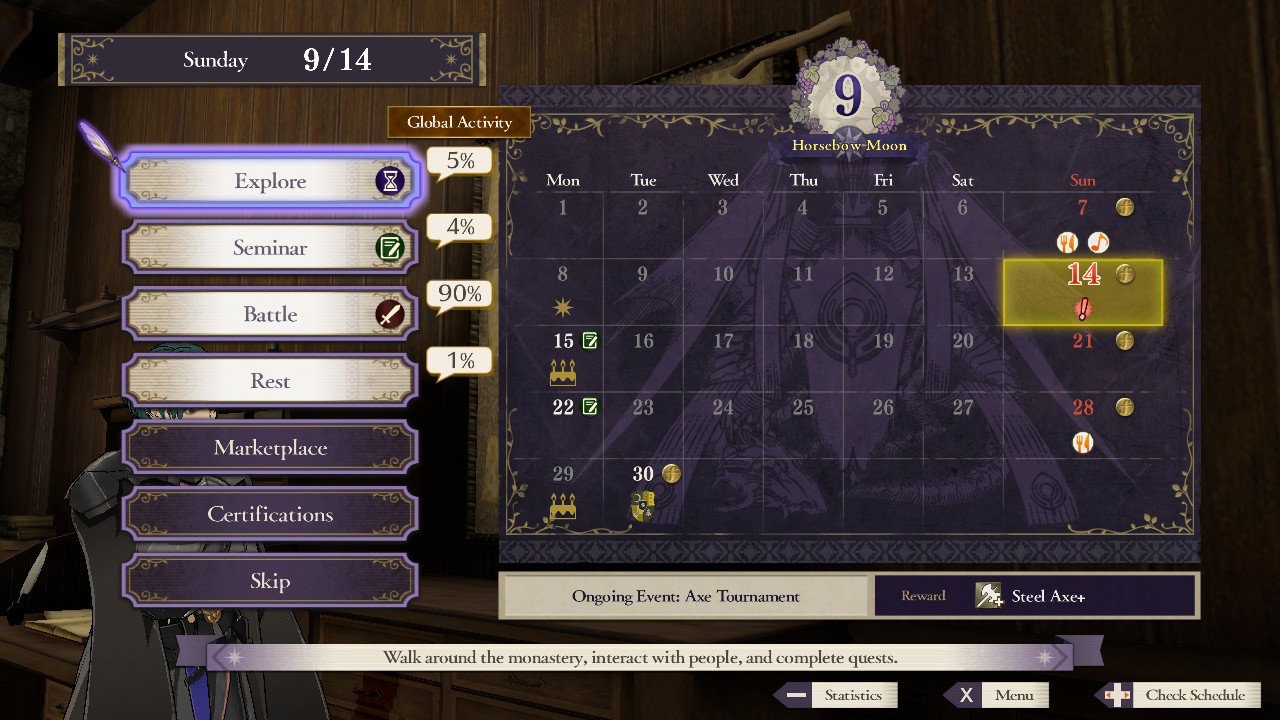 The Monastery serves as the central setting of the game, and it’s where you are expected to prepare for battle, educate your students, cultivate relationships, and complete various side-quests in your free time. You have one month of in-game time leading up to each story mission, and with that in-game month, you get 4 free days to do with whatever you want. You can take part in combat missions, train with your comrades, or even take your companions out for tea — whatever happens on these days is up to you, and those happenings can come back to either help you or haunt you as you progress through the game’s main story.

Fire Emblem: Three Houses tries to do a lot of things, but it never loses sight of what the series it at its core: a strategy game. Everything listed above could be considered the ingredients of a meal, while the grid-based strategic combat could be considered the main course. Everything you do in your free time will impact this part of the game, and with perma-death as a consequence, it would behoove you to take your time and prepare. Sure, spending a whole month trying to raise your support levels with students might seem nice, but when you have to battle at the end of the month, well, you just might wish you spent a little more time going out on combat missions. 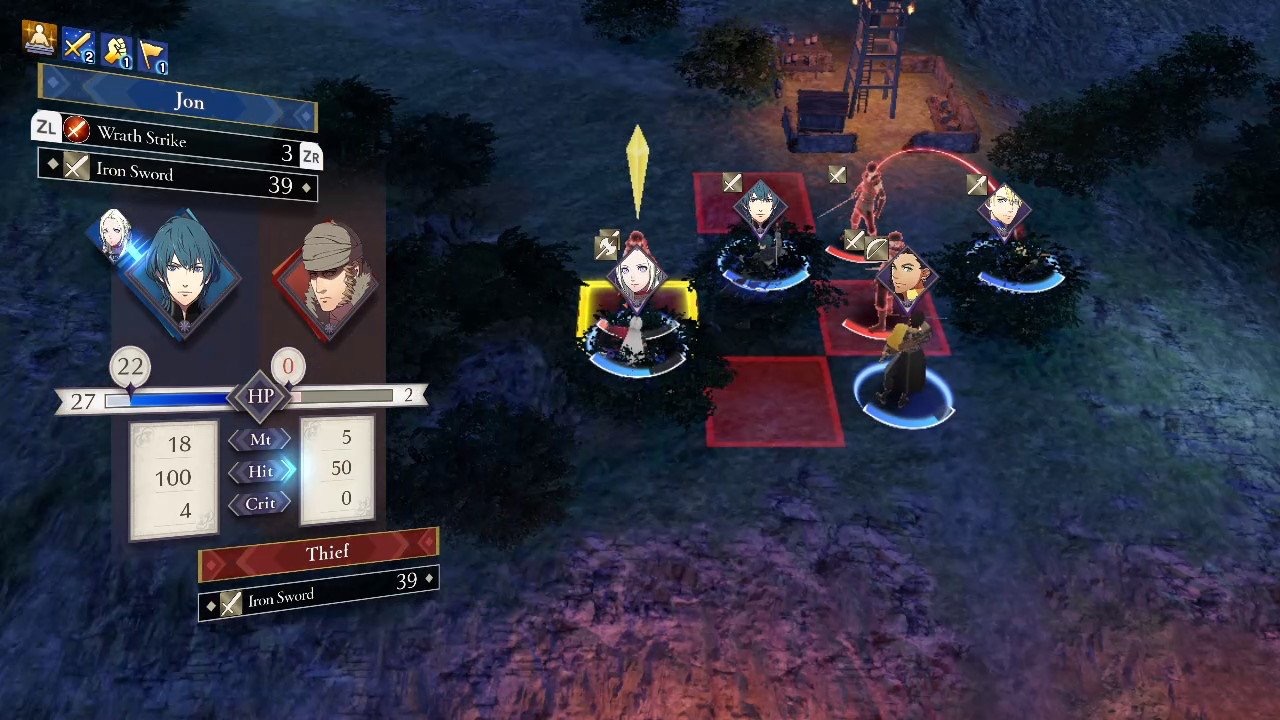 The perma-death nature of this game makes each battle feel like the stakes are high, but the game does give you some breathing room. For starters, you can have up to 5 save files. So if you’re feeling unsure going into a battle, you can simply save in a separate file, and reload your original file should you fall in battle. In-game, the Divine Pulse mechanic allows you a limited number of opportunities to turn back time should a plot-central character die, or if you simply think you need a redo. While this ability certainly reduces the risk associated with characters dying, it doesn’t necessarily eliminate it. Sometimes you may turn back time in the hopes of saving one of your favorite characters from meeting a terrible end, only to realize that even if you can save them, one of your other teammates will meet a similar fate.

My main gripe with the combat is that the animations can come off as rather...unimpactful at times. Attacks involving melee weapons and magic look and feel great. The amount of times I’ve stood up out of my seat after delivering a critical hit is a testament to how (for lack of a better word) hype the combat can be. However, the ranged attacks, mounts, and just about everything else really don’t feel that special by comparison.

One thing that this game should be commended for is being a very accessible game for newcomers. Some people like hard games, I know I do, so that’s why I chose to play on the classic setting, which enables perma-death. However, there are also those who wish to sit back and enjoy the story, which is why another setting exists. This setting enables character respawns following the end of battle, and is a great way to make sure that everyone can get in on the action of the latest entry in the Fire Emblem series.

But of course, what is an Role-Playing-Game without a role for you to play?In this game, you play as Byleth, the son of a mercenary who is recruited as a Professor to teach the students of one of the three ruling houses of the land of Fodlan. The plot isn’t very tight, as there is a lot of free time in between story beats. An in-game month’s worth of free time, to be exact. And if you’re smart, you aren’t going to want to speed through that month of in-game time. This can make the pacing of the game come to a sudden halt, particularly during the latter half of the game. However, despite the faults of the plot, this game’s story is carried by a variety of charismatic, well-written characters.

More often than not, I found myself being more invested in what’s going on with the characters that aren’t important to the plot, rather than the actual plot itself. The characters tend to have layers of depth that is generally revealed via support conversations. You won’t see too much character work for the non-plot-specific characters in the main story, but if you spend time with these characters and get to know them, you’ll slowly peel back more layers and understand more about who these characters are, as well as their motivations. No one character is a hollow shell, everyone has some layer of nuance to them, and that makes the world really feel alive. This really helps to give the player a sense of attachment to some of these characters, and in my experiences, I found myself feeling a little guilty if a character fell in battle — given the bond my Byleth had formed with them. 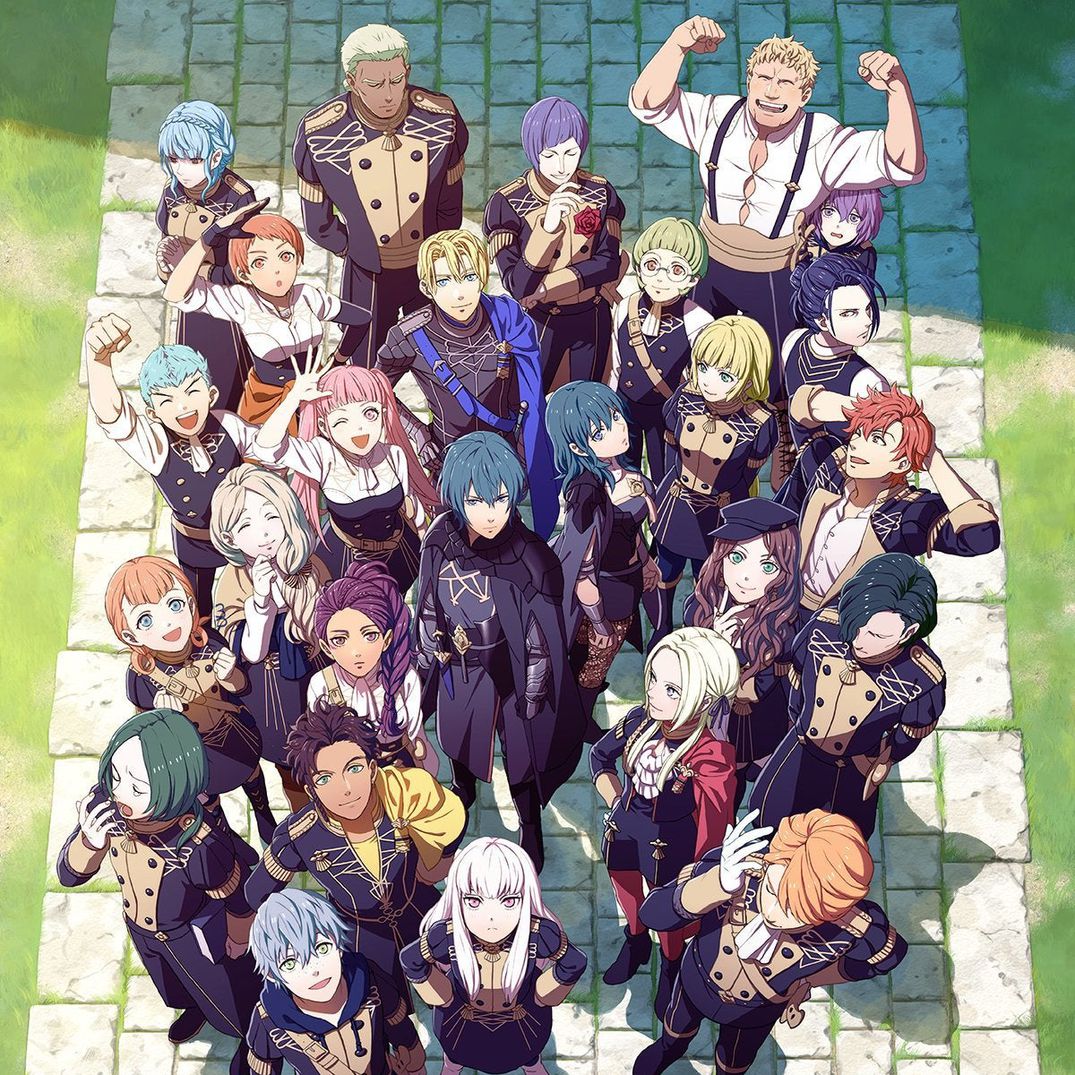 Unfortunately, for as great as these characters can be, their designs can be less than stellar at times. As the game is set in a school, it’s understandable that many characters should be in the same/similar clothing, but everyone kind of blends in with each other as a result. This game may have substance befitting of a game such as Persona 5, but what it lacks is style, and that’s a damn shame. I would’ve loved to see more variety in the character design and artwork, because this game is actually really pretty to look at. The animation is beautiful, and the FMV cutscenes can be a spectacle to watch.

At the end of the day, Fire Emblem: Three Houses succeeds on many fronts. It’s a beautifully crafted, engaging, accessible entry in the Fire Emblem franchise that packs so much replay value that it’s actually kind of scary. Fans of Fire Emblem or Persona should feel right at home, but even if you don’t belong to those two houses, you’re still likely to find some reasons to stay. It’s story may leave something to be desired, but it’s characters, gameplay, and presentation all make this one hell of a thirst quencher in the traditional summer video game drought. At the end of the day, with 3 points going to the Golden Deer, 3 points going to the Blue Lions, and 3 points going to the Black Eagles, Fire Emblem: Three Houses gets a….