It's Friday once again, and I've got something pretty special today. Read on for an overview of FictionSphere by Team Einherjar - but first…

…We've got another game on our hands! If you can call this a game. Genesis is a sort of tech demo, consisting of a short hallway with three enemies and one trap - unless I’m an idiot, or unless there was a bug. The comments and pictures suggest that there’s more than what I’ve seen… 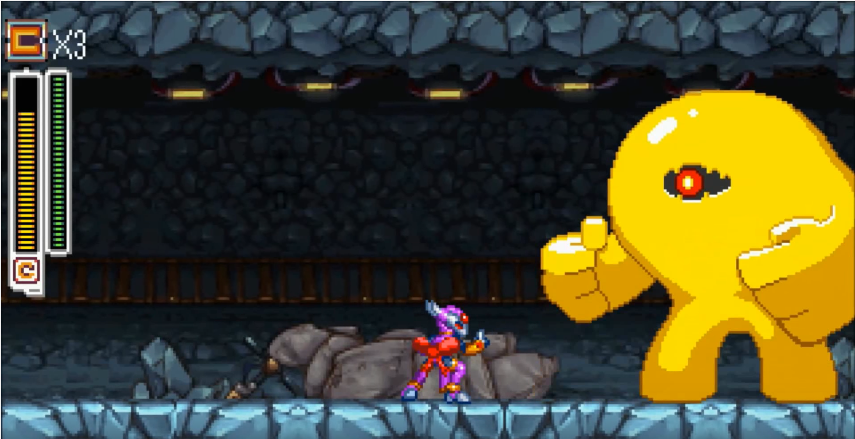 You've got four lives and a subtank, but that doesn't matter. What matters is that you've got most or all of the biometals and abilities from the original Megaman ZX, and all of your forms have been resprited for Ciel - yes, the same Ciel from Megaman Zero. They look pretty good!

There's not much else to say about this one. There's a few bugs, but if the team's first commercial game makes it to market, this one's probably not getting finished. It serves as a neat little demo for Megaman ZX itself, so if you've ever wanted to try that game out (and I have!), give this a shot. 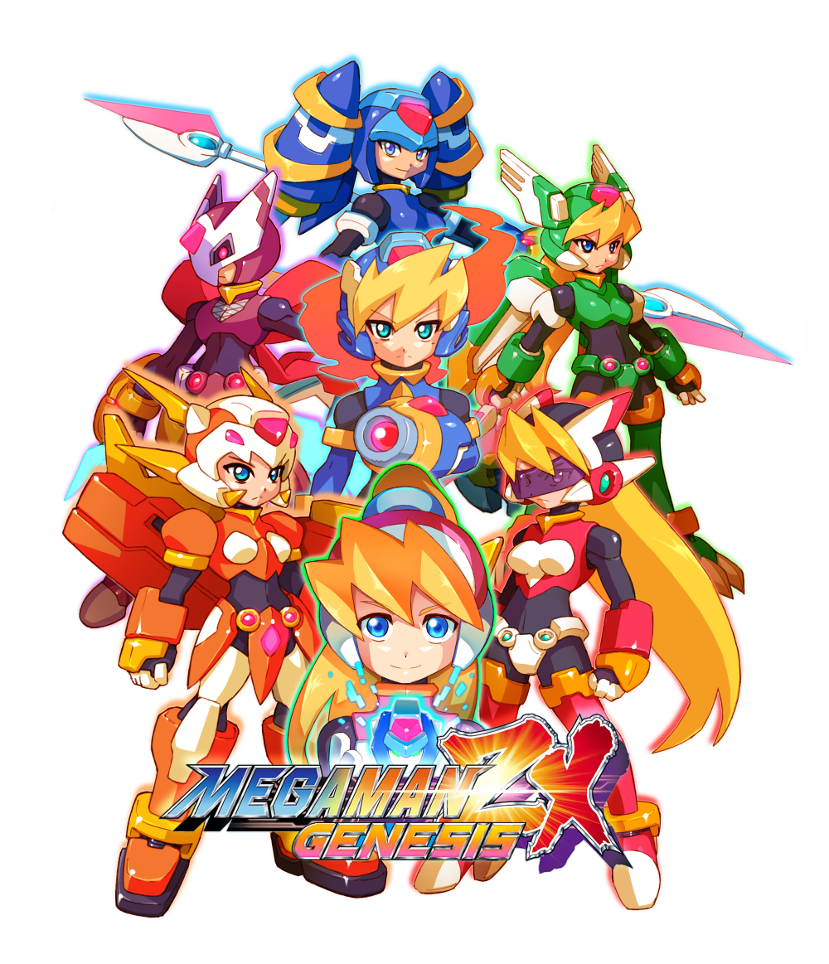 Now, on to the main event! 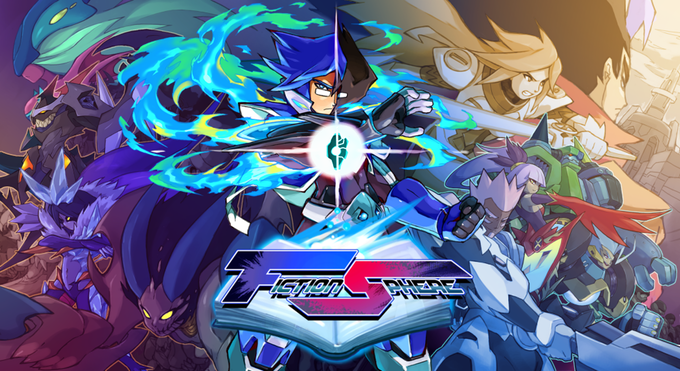 Hey, anybody like Megaman Zero? How about character action games? Well, what if you could have both at once? It's my honour to present you with FictionSphere, a crowdfunded 2D character action-platformer with a focus on long free-form combos. Giving enemies in a Megaman-esque game more health than normal and leaving it to the player to overcome them through accumulated skill is an interesting choice, though the prologue stage in the demo could probably shave three-five minutes off its runtime to compensate.

You play as Ratio, a young man who had to have his arm replaced after an attack by viral monsters called "Phantasms". Normally a person attacked by a Phantasm will be turned into one (even if they're dead), but people who survive the virus gain special powers and become Excels. A bunch of these folks formed a superhero team with an army of robots to rule over a chunk of the scattered human society, and, uh, they're not doing a good job. It does give this game the unique benefit of having two visually distinct villain groups to pull bosses from, though both are united by the red string of waifu. Out of the five women we've seen, four are monster girls, and the fifth is your sword-wielding rival. They knew what they wanted and they did it. 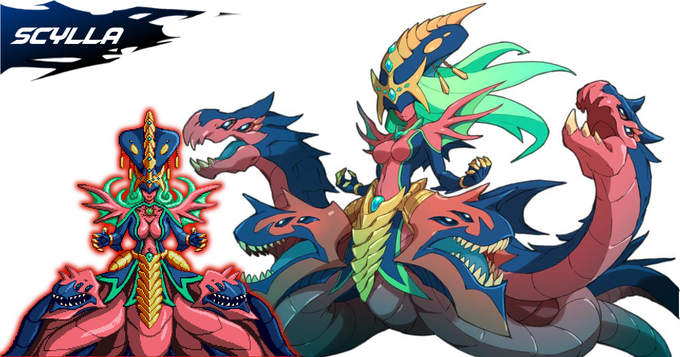 Combat revolves around your melee button. You have a three-hit ground combo, a launcher, and a four-hit air combo. Pressing the button cycles through your three Artes, which takes a bit of getting used to, and landing hits builds up your meter. You also possess a weak blaster (which also builds meter) that can store up to three levels of charge, though be aware that charged shots take meter. You can shoot downwards as well, and landing all three shots on a downed enemy will launch them. One type of level two/three charge shot also launches, and you can switch between your current two options with the right trigger or in the pause menu. Charging up to level three gives you the chance to either fire a second charge shot, or use an EX Arte.

Artes are the other core component of combat, and you can have two sets of three available (to be switched between, with a short cooldown, using the left trigger or the pause menu). These special moves take meter, and learning how to use them effectively will unlock the full extent of the combo system. You can change their order in the pause menu, and in the full game you'll be able to level them up and purchase more. They feel good to use, and the EX versions, accessed with the level three blaster charge, come with zoom-in and slowdown effects on hit that make you feel like a massive badass.

Your defensive and mobility options are light, but reasonable. There's a dodge roll that lets you quickly avoid many attacks, but watch out for unblockables marked by enemies pulsing as they strike. Jumping is a no-brainer, and you can kick off of walls like in Megaman X - kinda'. This may be a bug given how it was described in the tutorial, but you can only do the as-you-remember-it wallkick from the X games once. After that, you're relegated to slower, longer jumps. With the way levels are designed, you can still get to where you're going by doing this up shafts, but it doesn't feel as good as just wallkicking the whole way. I hope that gets another pass, or the input that separates the two commands is implemented better. Heck, if it’s working as intended, take out the initial wallkick. Don’t tease me like that.

The last mechanic to cover is shooting into the background. Sometimes, you'll reach a puzzle or combat arena that necessitates doing so, and with a press of the B button, a blue reticle appears and your blaster can fire a stream of shots into the background. You can aim with the right stick while taking any other action, but the only things you can do while shooting are aim and dodge. It would be nice if holding a direction with the left stick while shooting let you dodge in that direction, but the mechanic works fine. I think switching to the gallery mode should also be available sooner when it’s required, as there sometimes seems to be a delay on it after a cutscene plays. Just remember: it takes some time for your and the enemy's shots to cross the gap between planes, so don't stand too close to them if you want more reaction time to dodge.

The prologue mission is the main event, and lasts for about twenty minutes. That's too long for a Megaman intro level if you ask me, but it works as a comprehensive demo for an unfinished game. At any rate, it does a good job of showing everything FictionSphere has to offer. Enemies, traps, enemies that serve as traps, little secrets, simple puzzles, combat arenas, and shooting galleries populate the level, though it really feels like a large chunk could be taken out and placed elsewhere (and a similarly large chunk could just be taken out). The difficulty is reasonable as long as you work to learn the mechanics, and there is a generous number of lives on the Casual difficulty this demo offers. Still, I do wish your strikes were a bit less stubby.

The demo ends with a miniboss fight against a mech in the background, a short walk with a lone enemy-based trap, and the main boss. Unfortunately, I had to look up the boss on YouTube, because I encountered a screen lock bug right after the miniboss! Drat. Well, a new version of the demo's come out, so I'll just update and go through it again. The bosses are good, though the mech highlights the lingering hitboxes of explosions. They follow a pretty reasonable design of having randomized patterns, but each attack they choose has multiple parts, providing time to learn and counter. Might get old when the boss is invulnerable for too long, but it’s a solid idea. Also, I think the text boxes and boss health bar need a bit of work to make them less “jpeg-y”. After you beat the level, you receive a detailed breakdown on your performance and a ranking. It may not keep track of button mashing, but if it accuses you, it’s probably right.

Rounding out the package is fully re-mappable controls, a tutorial, a training room (and you better believe you’ll use it), and trials that I haven’t checked out. The spritework and designs in this game are top notch, and I can’t wait to see everything in motion. There’s also some kind of extra mode unlocked by beating the story stage, and I don’t know what it is because I need to go back and do it! Not gonna’ hold myself to beating every game I cover, but this one was within my grasp… ah, well.

In conclusion (I’d rather not make a habit out of deep-diving into every game like this!), FictionSphere is a very promising character action game with some flaws that need ironing out. It’s currently undergoing a Kickstarter campaign, and, mercifully, it hit its goal earlier today. Thing went from 55% to 105% in under a week! I was really scared this was going to come off as begging, but nope, doesn’t need it! Hopefully those stretch goals aren’t too much to handle. Still, make sure you check out the demo, and send any feedback to @EinherjarTeam on Twitter (or wherever else you find them).

I hope that this was a worthwhile read - and I hope that I can get this done days sooner next week! No Distorted Travesty tonight, gotta’ work on my time management! See ya’ round!